Water Update: PFAS and the Cost of Cleanup 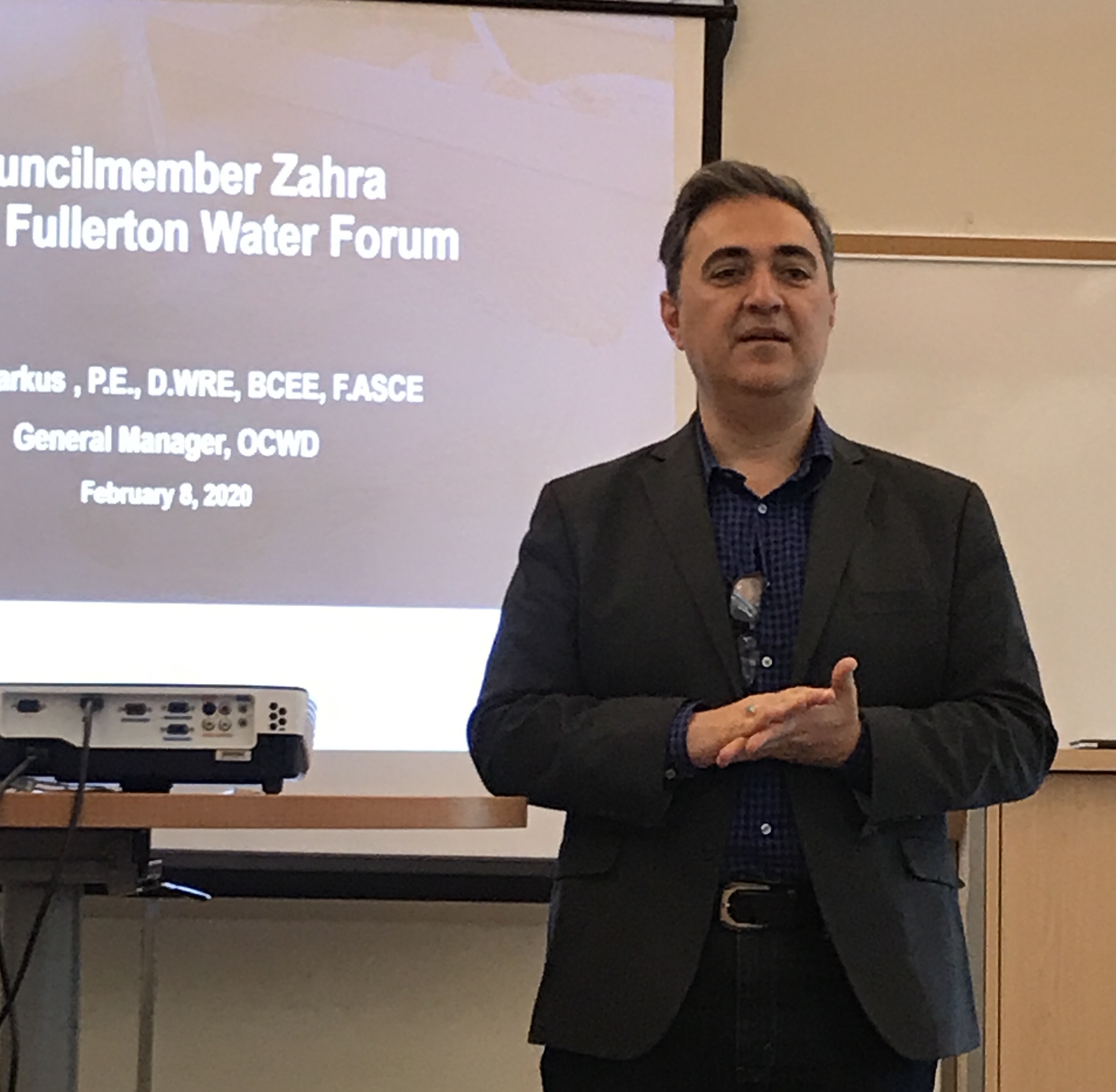 PFOA (Perfluorooctanoic acid) and PFOS (Perfluorooctanesulfonic acid) are 2 out of 5,000 per- and polyfluoroalkyl substances collectively referred to as PFAS. PFOA and PFOS are long-lingering manmade chemicals that had been used in firefighting foams, fast food containers, non-stick cookware, waterproofing, and even dental floss, among other products that are no longer produced with these chemicals in the U.S., according to Markus.

The Board’s media release explains, “Exposure to PFOA and PFOS can cause adverse health effects, including harm to a developing fetus or infant, immune system and liver effects, and cancer.” However, Markus stated that there is a “Lack of information on what the health effects are on the human body,” as it is “being studied.”

Markus explained that OCWD manages the water basin that serves 2.5million people within 19 water agencies. Fullerton is one of those agencies and it pumps 77% of its water from the basin and purchases the rest from MWD.

There are 200 wells within the basin. Only 3 of the 53 wells that have been tested for PFAS over the last year exceeded the June 2018 combined RL of 70 ppt (parts per trillion). Upon the February 6 RL reduction to 10 ppt for PFOA and 40 ppt for PFOS there are now 42 wells requiring water systems “to take the water source out of service, provide treatment, or notify their customers in writing.” Markus said that as more wells are tested, he estimates that 71 wells could exceed the new RL, effecting 11 water systems, including Fullerton. 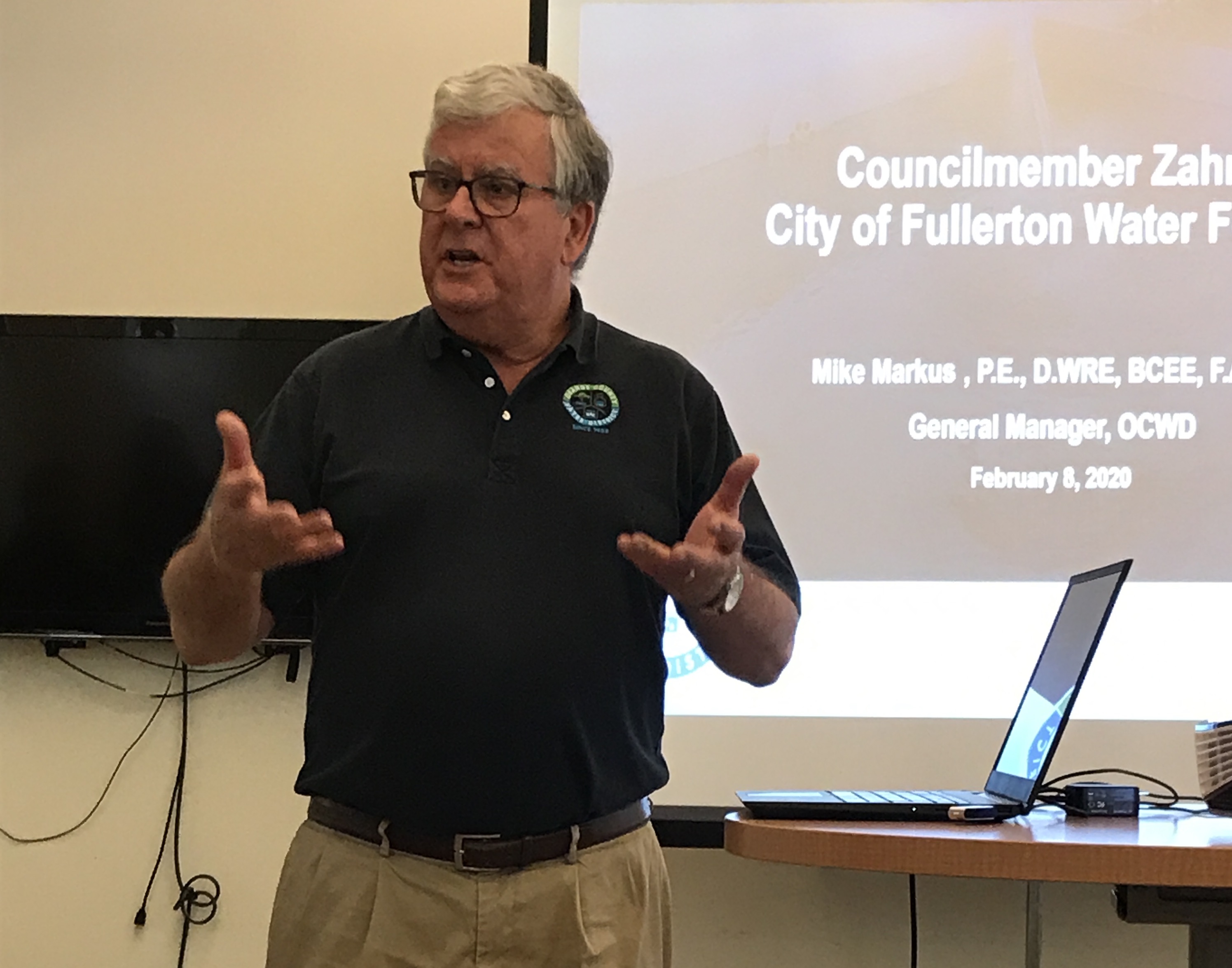 When tested in May, August, and October 2019, Fullerton’s Well 3A at the main plant in Anaheim was below the combined 70 ppt threshold, hovering around 65 ptt. Since the new RL took effect, well 3A has been shut down due to PFOA detection ranging from 16 to 19 ppt and PFOS detections between 46 and 48 ppt. Test results and on-going update can be found on the City of Fullerton website HERE.

Markus discussed options for removing the chemicals down to non-detected levels at the point of extraction using either granulated activated carbon in 12 feet wide by 16 feet high tanks or using an ion exchange with a resin. Reverse osmosis is not a feasible option as there would be no means to dispose of the resulting stream of brine concentrate containing the extracted chemicals.

OCWD is ahead of the curve. They are already testing 4 different carbon and 4 different resin extraction systems in Anaheim. In October, the OCWD board also approved a consultant to determine where to locate the treatment systems that they plan to install over the next 2 to 4 years. OCWD is looking into purchasing the systems while plans are still being developed for each site to enable the systems to be in place sooner.

In November the OCWD board approved sharing the cost of the PFAS water treatment systems and about half of the Operations and Maintenance of the systems (up to $75 per acre foot), among all 19 water agencies in the district, to lessen the financial burden on the 11 affected by PFAS. The price of pumping water from the basin will likely increase by $40 to $50 per acre-foot but would still be much less than purchasing water from MWD.

The board hopes to recover the cost of cleanup through legal means as well as grant funding. The California Attorney General may sue Dupont, the inventor of PFAS, as other states have won. Markus said OCWD is also lobbying the state legislature for $500 million statewide for PFAS clean up in a proposed Water or Climate Resiliency bond.

Additionally, wastewater treatment in the upper watershed could lower PFAS levels in the basin, as they has been detected in run-off from sources upstream in the Santa Ana River.

Until the water treatment systems are in place, water retailers, such as Fullerton, can purchase replacement water directly from MWD. The cost differential between water produced by pumping and purchased water will be the responsibility of the water retailer.

McWade said that since well 3A was taken offline due to PFAS, Fullerton has not purchased additional water from MWD. Because water demands are lower in the winter, Fullerton has been able to pump enough additional water from other wells to make up for the loss. If more wells go offline as a result of further testing finding more PFAS contamination, Fullerton would have to import more water at about double the cost of water produced through pumping.

PFAS isn’t the only contaminant Fullerton’s water utility is dealing with. The north part of the groundwater basin from which Fullerton pumps water, is being studied for a potential superfund site designation by the Environmental Protection Agency to help clean up the volatile organic compound (VOC) plume moving through the north basin. (www.epa.gov/superfund/orange-county-north-basin) Fullerton currently blends water from different wells to reduce the VOC to safe levels, and the blending plan could be affected if some wells are taken offline due to PFAS.

Fullerton’s Infrastructure and Natural Resources Advisory Committee (INRAC) has reviewed and approved shifting a portion of funds initially allocated for reservoir rehabilitation in the recent water rate increase, to fund reactivation of an MWD connection on the east side of Fullerton that has been deactivated for 40 years.

McWade said she anticipates it will cost about $5 million more per year for Fullerton to purchase additional imported water and $10.9 in capital improvements. To recover these increased cost, a rate increase (beyond those already approved by City Council in 2019 for the next 4 years) would have to go through a Cost of Service Study. She estimated an increase of roughly $126 per connection per year.

Alternatively, water conservation could lower the amount of water purchased and reduce some of the rate increase. In addition, McWade agreed that any cost recovery from responsible parties could be used to defray rate increases in the future, but would not be distributed as rebates directly to ratepayers.

Ortega said that there are no home water filters recommended to remove PFAS. Manufacturers are hesitant to ensure effectiveness because it depends on the user changing the filter as recommended. Similarly, home reverse osmosis may not always have enough pressure to remove the contaminant.

Ortega suggested that the Santa Ana Watershed Groundwater Quality might have some funding. He also suggested that MWD might consider reimbursing water costs above the cost of MWD water directly without having to purchase MWD water. Ahmad said, “We (OCWD and Fullerton’s Water Utility) need to make sure we eliminate all risks.”

Ahmad also plans to apply for grants allocated to disadvantaged communities in conjunction with neighboring cities. He said Orange County is perceived as having no disadvantaged areas, but there are “pockets” like his City Council Election District where 28,000 people live. He said that is about the same size as areas recognized as “disadvantaged” in the Central Valley.

Markus said there is potential legislation for the EPA to set the Maximum Contaminant Level for PFAS within the next 2 years which would allow OCWD to apply for Superfund status and receive additional help. He is also working with the state legislature to change the process by which RLs are set by the DDW. Zahra agreed and said the timing impacts existing plans. He asked for a “more orderly” process. McWade said that if Fullerton had known 3 years earlier it could have been “built it into their plan.”