Updated March 3, 2020 to add information on three new sites discovered after the previous report was published:

For example, although titled the “Fullerton Gazette,” one site prints a number of generic postings without attribution on various lifestyle subjects having nothing to do with Fullerton plus a link to an in-depth interview with Chaffee by another fake site the “Anaheim Education Bulletin.”

This strategy follows Chaffee’s guilty plea on two counts of Petty Theft for campaign sign stealing in her failed 2018 council campaign, buying a condo in a district she does not live in order to qualify as a candidate in that district’s council race, and mailing false information to voters claiming endorsements she does not have.

About three quarters through the promotional “interview,” posted on the “Anaheim Education Bulletin” fake news site,  Chaffee notes she was not arrested or convicted for the 2018 sign stealing incident. That is true, however, Chaffee was caught on surveillance video removing campaign signs that were not hers, was charged with two misdemeanors of Petty Theft by the Orange County District Attorney, pleaded guilty to those charges, paid fines and performed community service in exchange for having the charges dismissed. The end of the interview is an advertisement for Chaffee’s OC Board of Ed campaign. The interviewer is listed as AEB Editor “Deborah Hayter for Anaheim Education Bulletin”. Deborah Hayter is a PR agent. 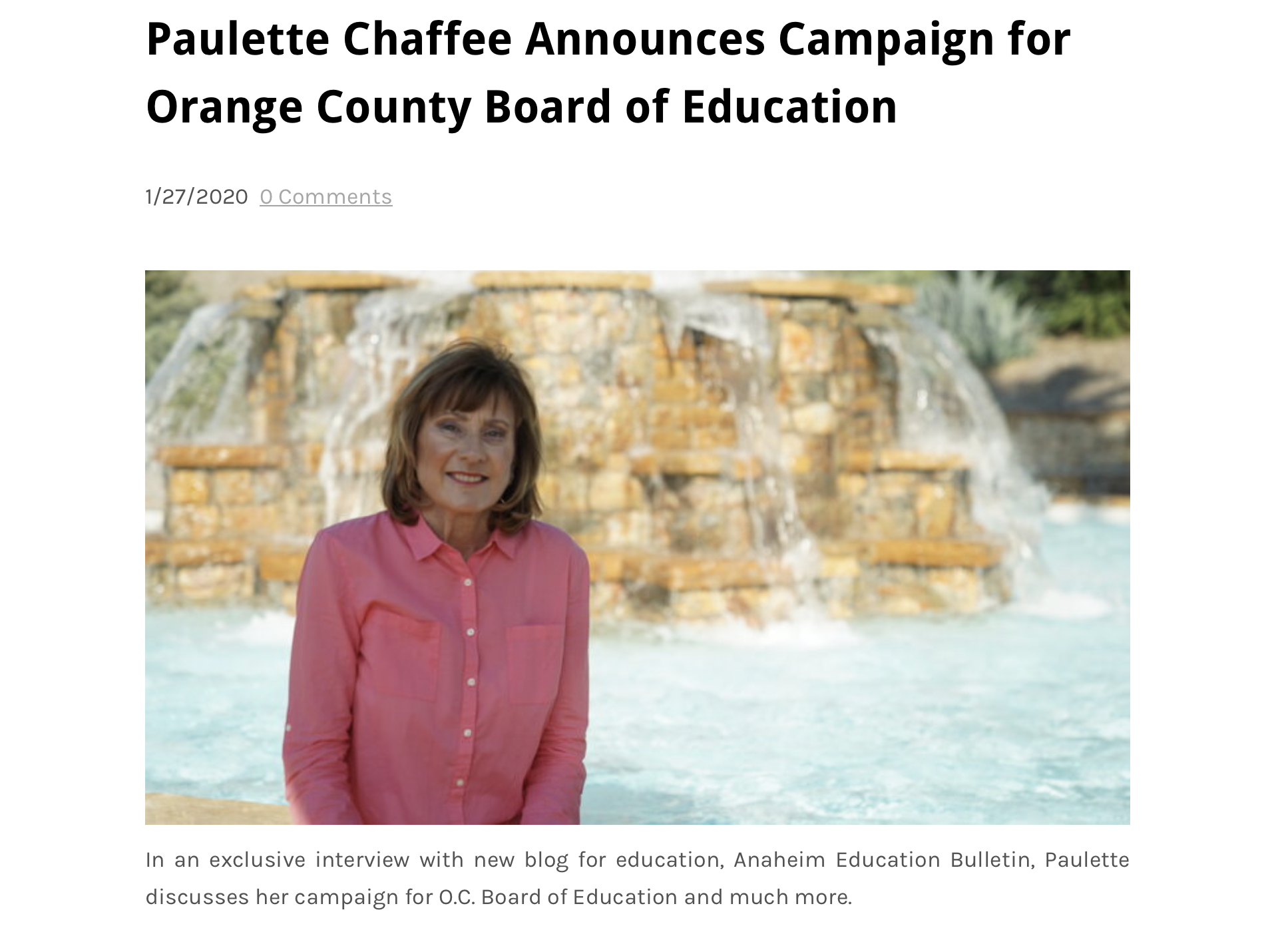 No FPPC ID number, as is required for political advertisements, appears on the Chaffee video ad or on any of the sites. Each fake news site has “Who we are” statements suggesting the sites are created by local citizens who love that particular town, and all feature generic non-attributed stories having nothing to do with local issues. The Fullerton and Anaheim sites show registration dates within weeks of each other in late December and early January.  The other three sites are registered on the same date within seconds of each other. The Fullerton and Anaheim sites are created using Weebly, Inc. All domain names are registered  with godaddy.   Observer inquiries to each site asking for the names of publisher and editor have not been answered to date.

The same video that appears on the Anaheim site also appears on Chaffee’s official campaign site under “5 Fast Facts with Paulette Chaffee” with no attribution to the Anaheim Education Bulletin and with no interviewer byline, though it does include the required FPPC ID number. The campaign site shows it posted the video on 1/9/2020 while the Anaheim site that supposedly conducted the interview shows the video on that site was posted on 1/16/2020.

The Fullerton site, in addition to five non-Fullerton stories, has one announcing Chaffee’s campaign which consists of a headline only and a caption with link to the Anaheim site’s “exclusive interview,” plus a link to a PR item from CSUF.  February postings include eight non-Fullerton stories, a cut and paste FPD Super Bowl notice.  The fake Fullerton site also has only one story listed in the “Nov 2019 archives” – apparently designed to create the impression that the site has a longer history than its actual December, 27, 2019 registration date.

The Anaheim site, registered January 17, 2020 has six non-Anaheim stories with no attribution – in addition to the Chaffee interview for January – but apparently gave up altogether in February and lists no stories. Instead it offers an ebook from a private label content development site where a person can purchase pre-written material and repost under their own brand for a fee.  All the sites use this service.

A perusal of the content site’s topic offerings shows where the other “local” stories came from. Here is the actual source at https://www.plr.me/about.

All the sites use the private label content for generic stories unrelated to the towns they purport to cover and add a few local event notices. The Buena Park site features a photo of Chaffee “Placentia Excellence Awards” which links to the Placentia site though no story is included. On the La Habra site a three-paragraph story “First 5 OC Targets Key La Habra Communities to Expand Early Childhood Education” posted 2/10/2020 features quotes by Chaffee. The article appears to repeat language from a legitimate First 5 OC Children & Families Commission report on County Trends published last year (http://occhildrenandfamilies.com/trends-research/key-county-trends/).

CORRECTION: The Observer apologizes for errors made in the “Follow the Money: OC Board of Ed” article that ran on page 19 of the Mid February issue and in the online story “Board of Ed Candidate Uses Fake News Sites to Promote Campaign”.

Paulette Chaffee was charged by the Orange County District Attorney (OCDA) with two misdemeanor counts of Petty Theft related to campaign sign stealing incidents on October 2018, which were caught on video surveillance cameras, and she pleaded guilty on December 20, 2018. However, she was not convicted as our article mistakenly said. Further, OCDA spokeswoman Kimberly Edds confirmed by email on February 27, 2020, that “Ultimately, Ms. Chaffee’s case was dismissed. Thus she did fulfill OCDA’s requirements.”

Requirements included restitution of $20 and fines of $150 to the Victim Witness Emergency Fund and $150 in State Restitution. In addition she was to complete community service as directed by OneOC. The agreement read “If defendant completes 60 or more hours of Community Service in 90 days, the People will consider dismissal in the interest of justice. If only 20 hours of Community Service are completed, defendant’s charges to be reduced to infractions via a new complaint.”

The court docket shows that sentencing took place on 3/20/2019 where an “Oral motion by People to dismiss case pursuant to negotiated disposition” was granted along with a motion to withdraw the guilty plea, and the case was dismissed.

The Observer apologizes to Ms. Chaffee and thanks her attorney at the Khouri Law Firm, for alerting the paper to the errors in the articles. The Observer has returned $310 that the Chaffee campaign paid for its ad that ran on the same page.