According to the Orange County Healthcare Agency (OCHCA) as of April 10, Fullerton has had 31 confirmed cases of COVID-19 positive residents. This figure has grown steadily in the past two weeks since the county began specifying by city numbers of people known to have been infected with the sometimes deadly virus. Fullerton’s St. Jude Medical Center will not reveal if anyone is currently being or has been treated there for the disease. Orange County updates county COVID-19 related statistics on a daily basis on the web at https://occovid19.ochealthinfo.com/coronavirus-in-oc. They have also established a hotline for residents, open Monday through Friday between 9:00 a.m. and 5:00 p.m. at (833) 426-6411.

During an April 9 press conference OC Health Care Agency officer Dr. Nichole Quick also announced new recommendations that essential workers wear face coverings and gloves at work. She emphasized that N95 masks should be reserved for front line health care workers because they are in short supply, noting that people can make their own masks “from a variety of materials.” Asked by one reporter why the recommendation was not a mandatory order, Dr. Quick indicated that it could become one in the near future. Just two days prior to Dr. Quick issuing the recommendation, the Orange County Board of Supervisors declined, during an emergency meeting, to pass a measure to require gloves and masks for essential workers countywide. No such item appears on the agenda for the Board’s regular meeting on April 14.

The City of Fullerton issued a press release on April 9 urging residents to report businesses and individuals who “are not in compliance” with the county recommendation to the Fullerton Police Department at (714) 738-6800 even though the Fullerton City Council has neither passed nor discussed an ordinance requiring workers to wear face coverings or masks. The council last met on April 7, and isn’t scheduled to meet again until April 21.

Asked how Fullerton police would respond to a report of non-compliance, FPD Public Information Officer Sgt. Eric Bridges responded “At this time we are trying to educate those who are not in compliance. As of right now we prefer not to cite businesses or individuals however this could change in the future.” Pressed about how an officer could legally cite someone, Sgt. Bridges acknowledged that “There is no city ordinance requiring someone to wear a mask or gloves.” Officers currently responding to reports of non-compliance with social distancing guidelines “routinely clear the calls with full compliance,” according to Sgt. Bridges. 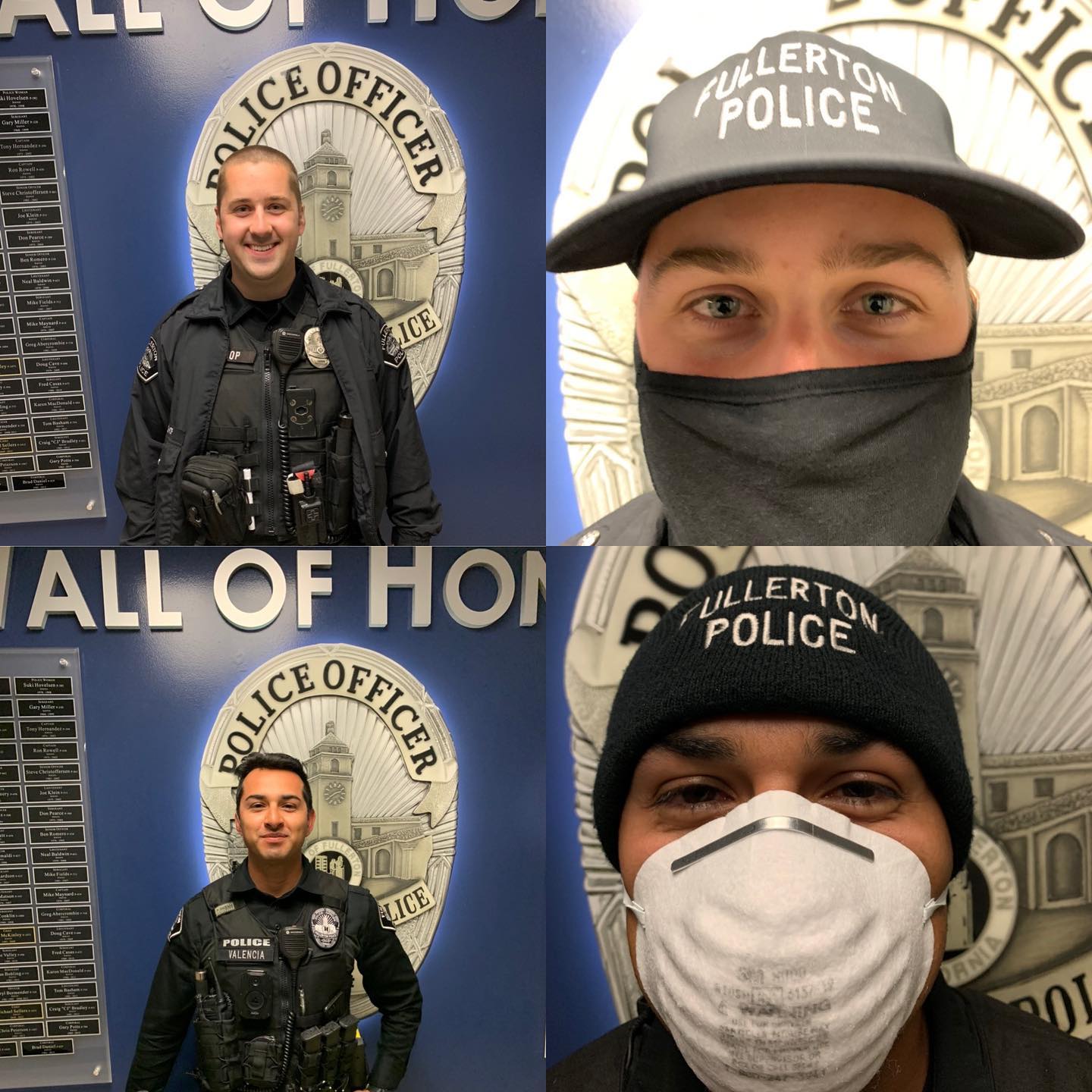 In complying with recommendations from the Orange County Department of Health, Fullerton Police Officers will now be wearing masks while on duty.

At present, workers in some Fullerton grocery and retail stores can be seen wearing masks, while others are not. The highly contagious virus can be spread by inhaling infected respiratory droplets or getting them into the eyes.

The OCHCA’s website statistics are updated daily, and now show that the county has passed the 1,000 mark for individuals testing positive for the virus. 17 OC residents are known to have died from it. Since March 27 the number of people hospitalized has risen and fallen, beginning with 50 and rising to the highest number yet of 140 on April 4. On any given day, roughly half of all hospitalized patients are in an Intensive Care Unit (ICU). The website notes that “Numbers fluctuate day-by-day due to changes in patient condition(s) and the number of hospitals reporting.” The number of reporting hospitals ranges from 19 to 24.

Fewer than 13,000 OC residents have been tested for COVID-19 to date—a small fraction of the county’s population of more than 3 million. Citing the relatively small city of Laguna Beach’s proportionately large percentage of positives tests in relation to its population, another reporter asked if a high rate of infections in one area of the county had led the HCA to monitor specific areas for the spread of the disease, Dr. Quick replied that it had not, and that the whole county should be considered “at risk” for transmission. “There is not a particular city that we are monitoring more closely,” she explained.

Asked by the Fullerton Observer if the disparity in percentages in people testing positive from a smaller city like Laguna Beach (35 in 23,358) vs. Santa Ana (78 of 337,716) could be because people in wealthier cities (like Laguna Beach) were being tested more, Dr. Quick replied “I don’t think that the assumption would be just that wealthier people are being tested more. There’s probably criteria that individual health plans as well as the public health lab are using.” She did not know how many people were being tested in each individual city in the county, but noted that across California less than 1% of the population had been tested overall, and that the “risk of transmission is countywide. It isn’t varied by the city location.”