A man was shot to death at or near the corner of Commonwealth Ave. and Lillie Ave. by Fullerton police on the evening of Sunday, May 3. The man, said to have been armed with a knife, was shot by one or more police officers after reportedly ignoring commands to drop the knife while advancing on foot toward other officers on the scene.

According to a press release issued by the FPD the following day, an officer of the force on his way to an “unrelated call for service” at approximately 9:27 p.m. noticed two males arguing near a pickup truck, one armed with a stick, the other with a knife. The officer “contacted both males” and requested backup from other officers. The press release states that the male armed with the stick dropped it and “began walking away,” and that he was “contacted by the other officers and detained,” but it is not clear from the press release at what point the backup officers arrived, or how many were ultimately on the scene during the incident.

In a video posted on the YouTube account of OC Hawk, FPD Public Information Officer Lt. Jon Radus described the stick as a “broomstick.” 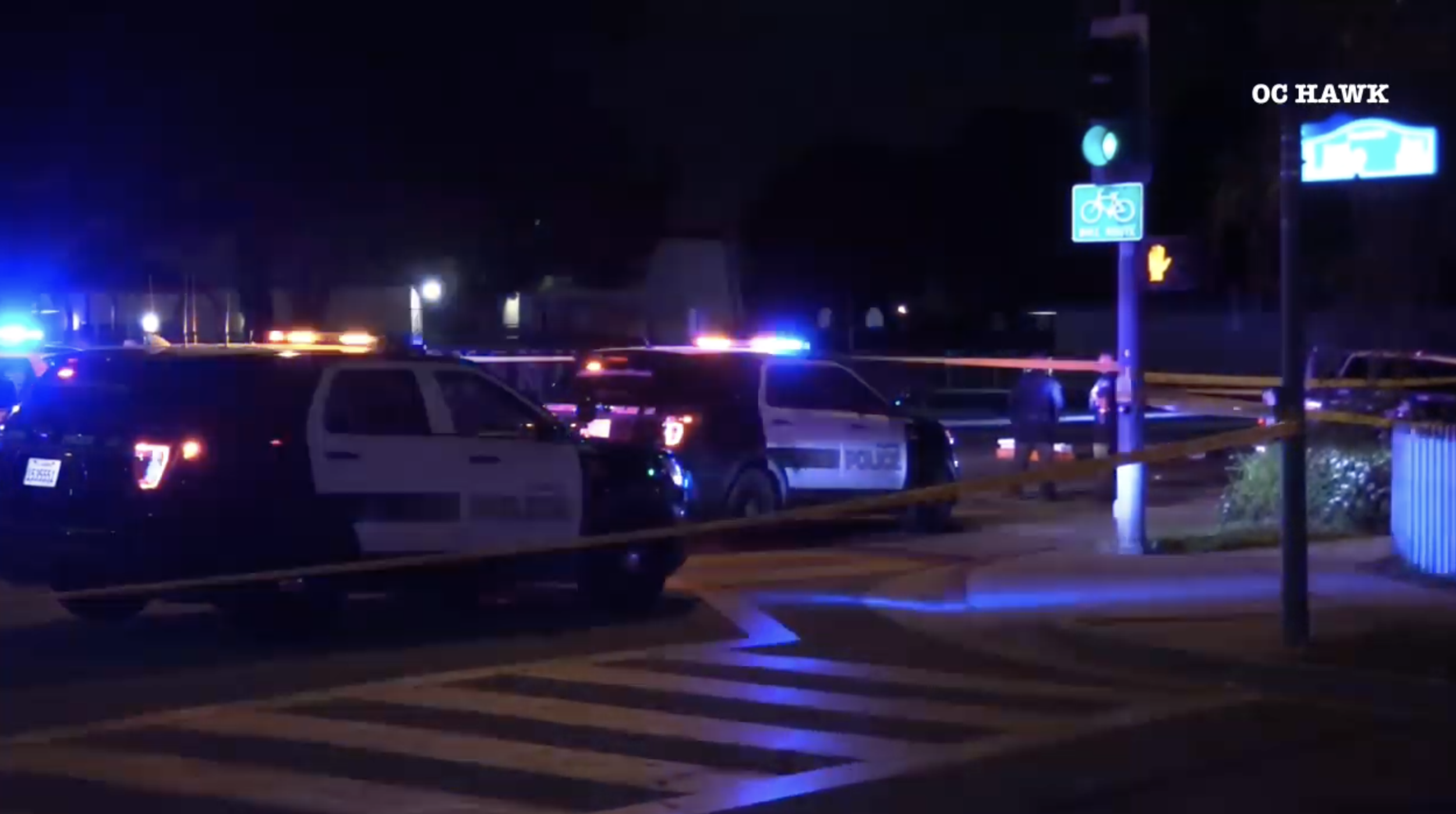 Image of the crime scene from a video posted on Youtube by OCHawk.

The press release goes on to describe how officers repeatedly commanded the second man to drop his knife and “deployed” a “less-than-lethal” shotgun round at him. The man turned and advanced toward the officers detaining the other male. Despite repeated commands to stop and to drop the knife, he “neared the Officers.” At that point, “an officer involved shooting occurred,” according to the press release, a standard phrase used by police following such instances. The FPD has not made clear whether one or more officers fired at and/or struck the knife wielding man, only that officers began First Aid and CPR “immediately,” and that the man was taken to a “local trauma center” by the Fullerton Fire Dept., where he was pronounced dead.

Police released a photo of a large knife reported to have been “recovered” from the scene. 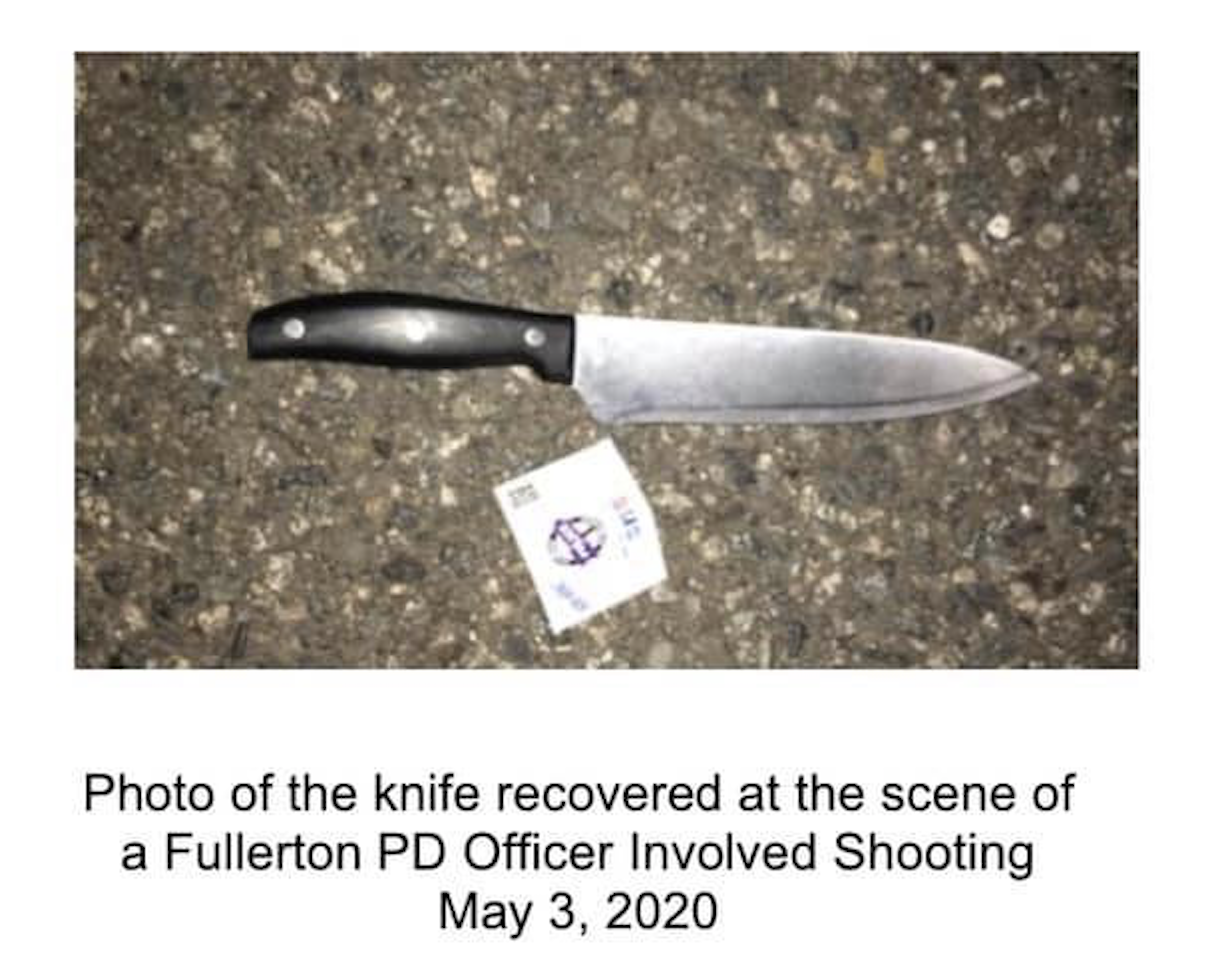 FPD did not release the names of the suspects, but are “working to confirm” the identity of the deceased. A department spokesperson declined to offer any more information about the shooting, including identifying the officer(s) involved, whether drugs or alcohol were involved, where the two men resided, or if there were other witnesses to the shooting.

FPD has not released any video or audio captured either by police vehicle dashboard cameras or the body cameras officers are required to activate during police activities, and declined to say whether or not they planned to eventually do so.

A seven second video appearing to have been taken from down the street at the time of the shooting was posted on Twitter and indistinctly shows activity near the lights of the intersection and captures the sounds of eight gunshots.

The video posted to YouTube by OC Hawk includes footage of the scene after the shooting, and an interview with a man who lives nearby and witnessed at least part of the incident. The man specifies in the video that the man with the knife was in a vehicle at the time officers began ordering him to drop the knife, and that the man appeared not to speak English, leading to another officer issuing orders in Spanish. The witness estimated that six or seven officers stood “in a line” trying to get the man out of the car, and that an officer announce that he had a beanbag-loaded shotgun.

The witness thought he heard shouts of “drop the knife,” saying that he assumed the individual had a knife, but then says that the man was “showing it to the officers.”  He was ‘not sure if he was showing it to the officers as a sign that, “I have a knife, please don’t shoot, or if it was, “I have a knife don’t come close to me or anything,” so those details are still unclear at this time. The knife-wielding man then reportedly exited the car, leading officers to shout warnings to him. The man turned around and started running, at which point “all the shots came,” according to the witness. The witness first stated that the knife-wielding man was running in the “opposite direction” from the police officers, but then said he was not sure whether the man was running towards police or not, saying that it “was a little blurry.”

It is not clear if all of the bullets fired hit the man.

Police request anyone with information about the incident to contact them at (714) 738-6800. Anonymous tips can be provided by calling OC Crime Stoppers at 1(855) TIP-OCCS.