Fullerton is fast approaching a cumulative total of over 500 cases of COVID-19 infections of City residents, an increase from 257 on June 9. The OC Health Care Agency (OCHCA) does not release numbers of deaths by city, but the online Huntington Beach Surf City Voice is reporting that Fullerton has had ten deaths from the virus, so far. It is unclear whether any of the deaths in the City have occurred in skilled nursing facilities, which have been the sites of the worst concentrated outbreaks countywide and account for half of all County deaths. According to State statistics, however, fewer than five such deaths in skilled nursing facilities have occurred in Fullerton. Overall, the County has recorded 323 deaths, the 4th highest in the state. 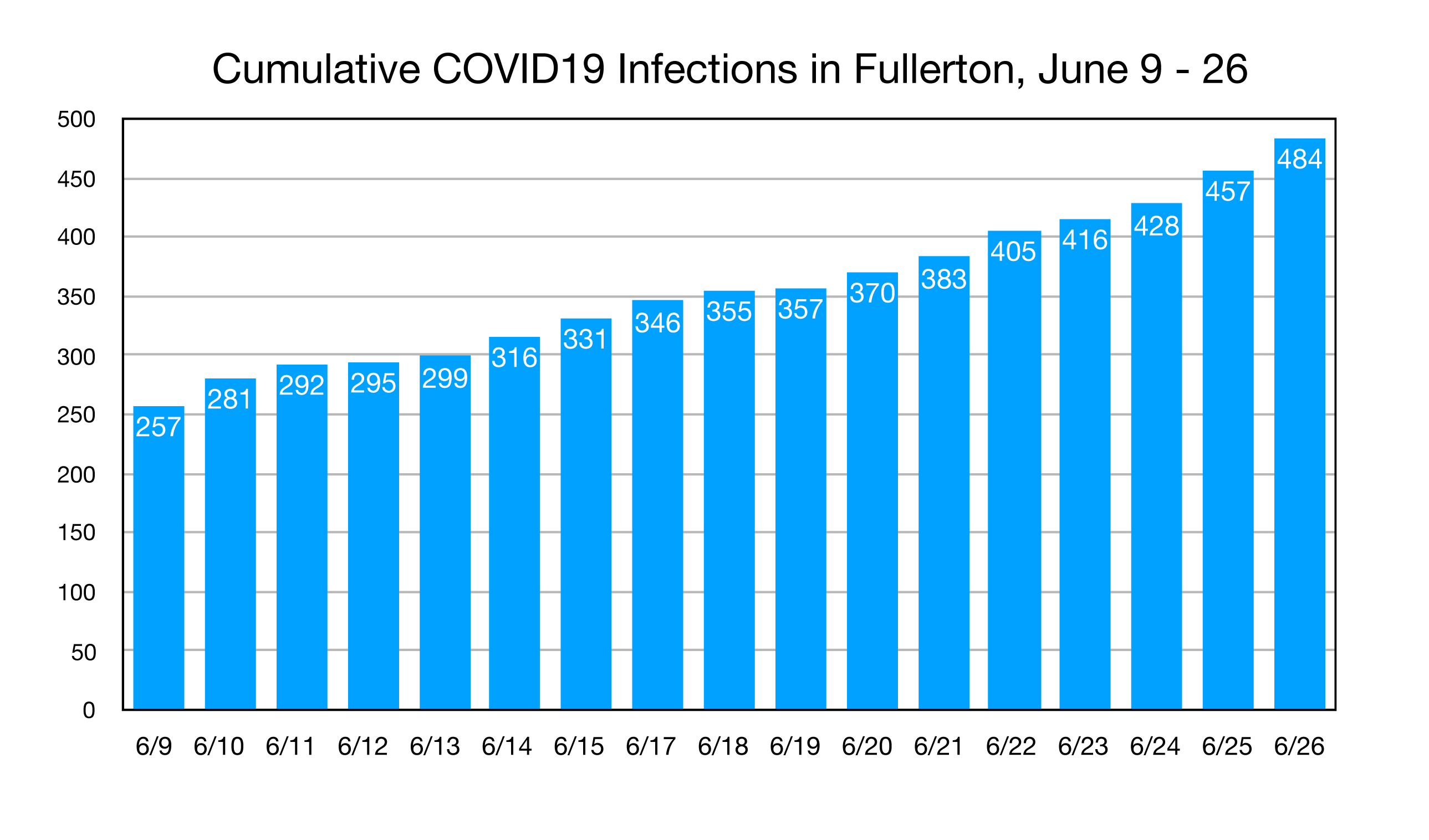 HCA Director Clayton Chau, who is also serving as Interim County Health Officer until a new one can be hired, said in a June 18 update that OC continues to fare well in meeting the state of California’s threshold levels that are supposed to trigger reevaluation of the County’s partially-open status, but in the following week some of those numbers rose beyond those levels.

Board of Supervisors Chair Michelle Steel continues to refer to Orange County as a leader in taking proactive steps to protect the community despite OC’s recent surpassing of neighboring San Diego County in numbers of positive cases identified. During a June 18 update, Steel announced that the County’s 7-day average of COVID-19 tests showing a positive for infections was at 6.8%, below the California Department of Public Health’s threshold of 8% that allows the County to remain partially open. By the following week, the number had increased to 8.75%, .75% beyond the threshold. Tellingly, the HCA skipped its normal Thursday afternoon briefing on June 25.

HCA continues to push out new numbers of infections, deaths, hospitalizations, and other data daily, but has changed its website to utilize the CalReady Database, incorporating an interactive map model from The Johns Hopkins University, and linking to the state of California’s COVID-19 website. According to that site, the County’s rate of increasing hospitalizations averaged over a three-day period, has risen to 17.6%, far above the 10% threshold set by the State. The number of hospital ICU beds that remain available is 37.7%, a number below the State’s 20% threshold. And 67% of ventilators are available.

Some reporters on a June 18 press call expressed skepticism that COVID-19 tests were easily available for asymptomatic people who may be spreading the disease without even knowing they have it. Chau explained that people would first require a referral from their Primary Care Physician or can use the County’s testing network, which can be contacted at 714-834-2000. Another questioned how the County could determine accurate positivity rates for people tested for the virus when its dataset didn’t seem to differentiate between the raw number of tests given versus the number of people tested, some of whom are tested more than once. Chau had no ready answer to the question.

Michelle Steel presides over a Board that pressured Dr. Chau to downgrade departed County Health Officer Dr. Nichole Quick’s directive for residents to wear face coverings while in public to a strong recommendation earlier in June. Fullerton’s own separate mandatory face covering order remained, but both were overridden just a week later on June 18 by a state order to wear face coverings while shopping, taking transit, serving customers, and while in other situations where individuals may come in contact with one another outside of their own households.

Violating the State’s face covering order is supposed to be a misdemeanor that could carry a fine, but, as with the previous County order, OC Sheriff Don Barnes has indicated that his department will not enforce it, leaving many to worry that infections will continue to rise as some people refuse to wear a face covering to protect others. To counter lax enforcement of refusals to wear face coverings, Gov. Newsom’s office recently announced that it might withhold State funding to counties that are out of compliance with the State’s order. At this time, it is not known if OC is in danger of losing critical support, but OC was one of several counties across the State where authorities had announced that they would not enforce the wearing of face coverings.

Locally, some businesses are requiring customers to wear face coverings, but others are not, leaving local residents to compare notes about where they feel safe shopping.