The Brea Olinda Unified School District Board of Trustees voted unanimously in a special meeting on July 7 to remove the Fanning name from the Fanning Academy of Science and Technology amid evidence that William E. Fanning, the school’s namesake, was a member of the Ku Klux Klan in the 1920s. The removal was the result of over a year of activism by community members, an online petition by Brea Olinda graduate Vivian Gray, many community members who wrote the board urging the name change, and ultimately a letter from the Fanning family requesting that the name be removed.

In 2018, in response to the public rally of white supremacists and Neo-Nazis in Charlottesville, Virginia, in which anti-racist protestor Heather Hyer was killed, Fullerton resident Mike Rodriguez, along with a group of local North Orange County residents, decided to organize an effort to remove the Fanning name from what was then called Fanning Elementary School, after discovering that Fanning’s name appeared on a list in the Anaheim Heritage Center of Orange County KKK members. This discovery followed earlier reporting by then-editor of OC Weekly Gustavo Arellano on Orange County’s Klan history.

After more research and organizing, Rodriguez and others, including Fullerton doctor Kris Percy, formed the “Re-Name Fanning” campaign. The movement gained momentum and led to protests and rallies beginning in 2018 and culminating in a long school board meeting on January 28, 2019 in which the Brea School Board voted 4-1 to keep the Fanning name with Keri Kropke being the only dissenting vote.

After that, the Re-Name Fanning group evolved into the North Orange County Truth, Justice, and Reconciliation Project.

Fast forward a year and a half, George Floyd has been murdered by Minneapolis police, sparking massive national (and even global) protests and conversations about historical and institutional racism, as well as the removal of tributes to Confederates, slave-owners, and other racist figures.

On June 16, 2020, the Fullerton High School Board of trustees voted unanimously to remove the Plummer name from Plummer Auditorium due to evidence that Louis E. Plummer, an influential former Fullerton Superintendent, was also a member of the KKK in the 1920s. The action was largely the result of an online petition created by Fullerton student Jacqueline Logwood on Change.org, that gathered thousands of signatures in favor of removing the Plummer name.

Inspired by this, as well as the national movement, Brea Olinda High School graduate Vivian Gray made her own petition on Change.org to remove the Fanning name. This petition also gathered over three thousand signatures.

At the June 25 Brea School Board meeting, dozens of local residents submitted public comments, urging the board to vote again to remove the Fanning name.

“As an African American woman, I was extremely hurt to find out that when an opportunity was put forth to rename Fanning—it was outvoted 4 to 1,” Vivian Gray wrote. “By keeping the current name of the elementary school, you are perpetuating the racist culture and bigotry that exists within the city of Brea, and the broader world around us.”

Emmanuel Lopez, who grew up in Brea, wrote, “Fanning’s name must be removed. Keeping that name gives power to racism and white supremacy. There are white supremacist organizations all across Orange County, and letting them know that this edifice is not tolerated in the City takes power from them. It takes power away from the Proud Boys of Orange County. It takes power away from the Rise Above Movement that is based in Orange County. It takes power away from The Institute for Historical Review, a publishing company that tries to spread anti-Semitic historical revisions of the Holocaust…Hate has been a Brea cornerstone since I was a young boy attending Mariposa Elementary School. The normalization of being called a ‘beaner’ or a ‘spic’ by my fellow students did not make it easier for me as I saw my Latinx friends getting sent to Canyon. When I was a senior in high school, someone spray painted swastikas all over the school. When I was in junior high, I heard a classmate refer to my black friends as n-words…The way to atone is to listen, learn, and act. This is me acting. So how about you?”

The Brea School Board took no action that evening. 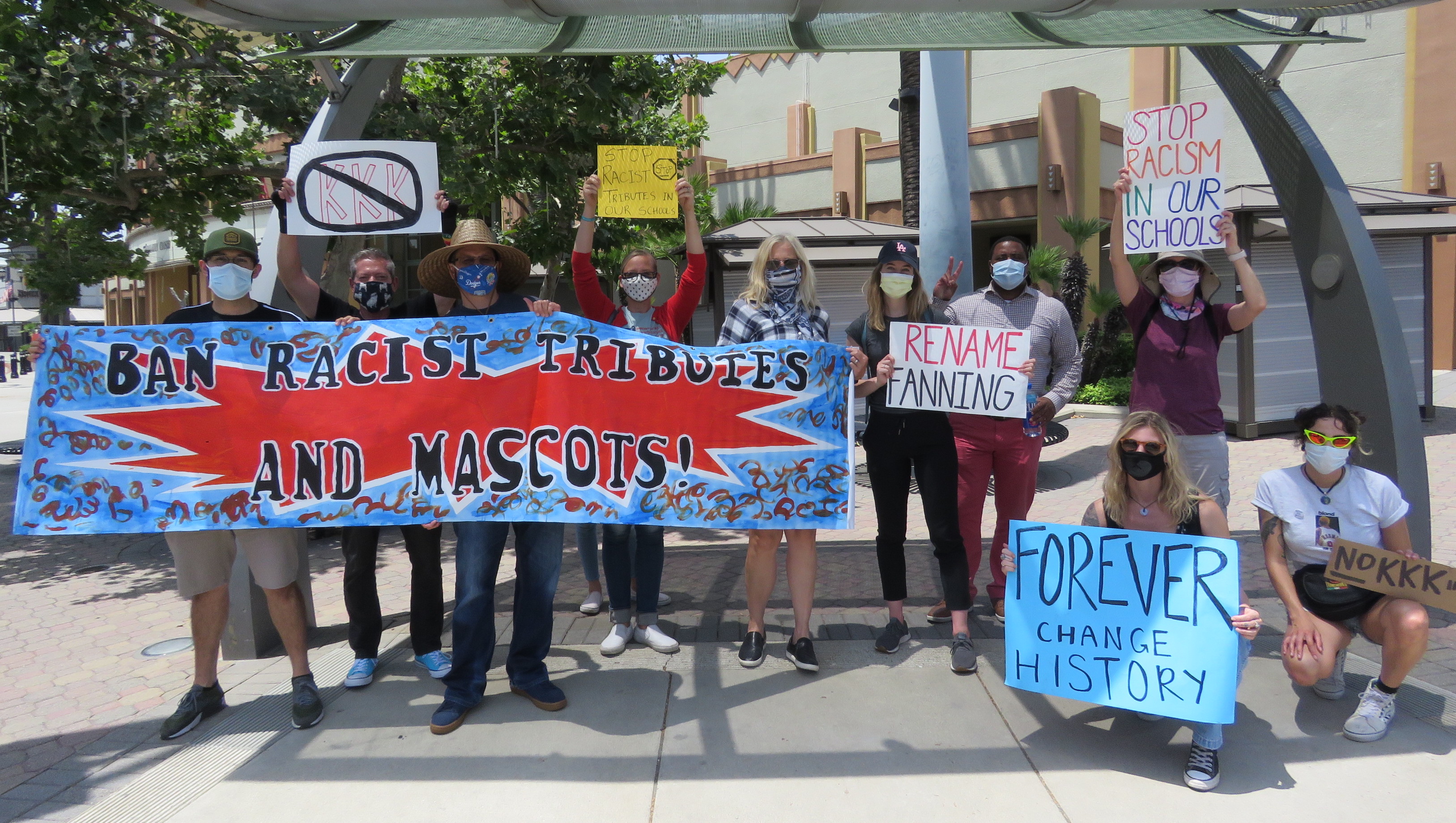 A group gathers on the corner of Birch and Brea Boulevard on June 30 to urge the removal of the Fanning name.

And then, a bombshell.

On July 2, the Fanning family submitted a letter to the Brea School Board, requesting that Fanning’s name be removed.

The letter paints a fairly glowing portrait of William Fanning, including his contributions to education in Brea, and denies allegations that he was in the KKK. “After carefully considering the context and origins of the evidence provided, it is our belief that the facts fail to support the allegations presented,” the letter states.

The reason the family gives for asking for the removal of the name is that “continuing to disagree over a name on a school unnecessarily distracts from the education of Brea’s children,” particularly given the challenges of COVID-19. “My brothers and sister, along with our children and their families, join me in the hope that people once divided in disagreement will soon feel divided no more. Now is the time to move ahead to create a new space with a new perspective,” the letter concludes.

The evidence that William Fanning was in the KKK in the 1920s is that his name appears on a list of Orange County KKK members donated to the Anaheim Heritage Center in 1972 by Leo J. Friis, a respected local historian, whose book Orange County Through Four Centuries was the first (and one of the few) attempts at a comprehensive history of Orange County.

Additionally, in an interview for the CSUF Oral History project, William Fanning’s son Carl describes going to a KKK rally with his father, though Carl later states that his father was not in the KKK.

Membership in the KKK was not something people spoke about openly in public. In fact, they called themselves “The Invisible Empire.”

Ironically, the very thing that helped break the power of the Klan in Orange County in the 1920s was District Attorney Alex Nelson obtaining a membership list and threatening to go public with it. It is believed that this is the list in the Anaheim Heritage Center.

For more about the history of the KKK in Orange County, check out my summary of professor Christopher Cocoltchos 1979 UCLA doctoral dissertation “The Invisible Government and the Viable Community: The Ku Klux Klan in Orange County, California During the 1920s,” which remains the major work on this topic.

According to Cocoltchos, “Five of [Brea’s] first eight mayors were Klansmen as were six of the ten councilmen who sat on the board of trustees from 1924 to 1936. Klansmen dominated the other civic offices during these years, providing 50% of the city’s treasurers, 25% of the city’s engineers, 50% of its city clerks, 50% of its city marshals, and 67% of its fire chiefs.”

We also know from James Loewen’s book Sundown Towns: A Hidden Dimension of American Racism that Brea in those years was a “Sundown Town” in which African Americans were not allowed to be after the sun went down. Numerous oral histories can be found substantiating these claims in the archives of the DeGraaf Center for Oral and Public History at CSU Fullerton.

In a special meeting on July 7, the Brea School Board voted unanimously to remove the Fanning name, and to rename the school Falcon Academy of Science and Technology.

“Although there was no mention of the sundown era, nor of the connections of William Fanning (the grandfather) to the KKK, presented to us by Anaheim’s historian laureate Leo Friis, it was a humble gesture to allow the city and schools of Brea to move forward and continue to uncover the City’s roots, both positive and negative,” Mike Rodriguez, who began the effort nearly two years ago, told the Observer.

“The students deserve to look at history through the eyes of marginalized communities, not a romanticized, whitewashed narrative, as many of today’s Brea’s students come from those communities,” Rodriguez said.