The November 3 Presidential Election Ballot for Fullerton residents will also include contests for local offices. There are 3 district elections for City Council,  and district trustee elections for 3 school boards.

The filing period for candidates to run in these elections began on July 13. Some candidates are qualified for the ballot, some have pulled their papers (from the City Clerk) but have not yet filed, and others may not have pulled papers and are waiting until closer to the August 7 deadline to file. 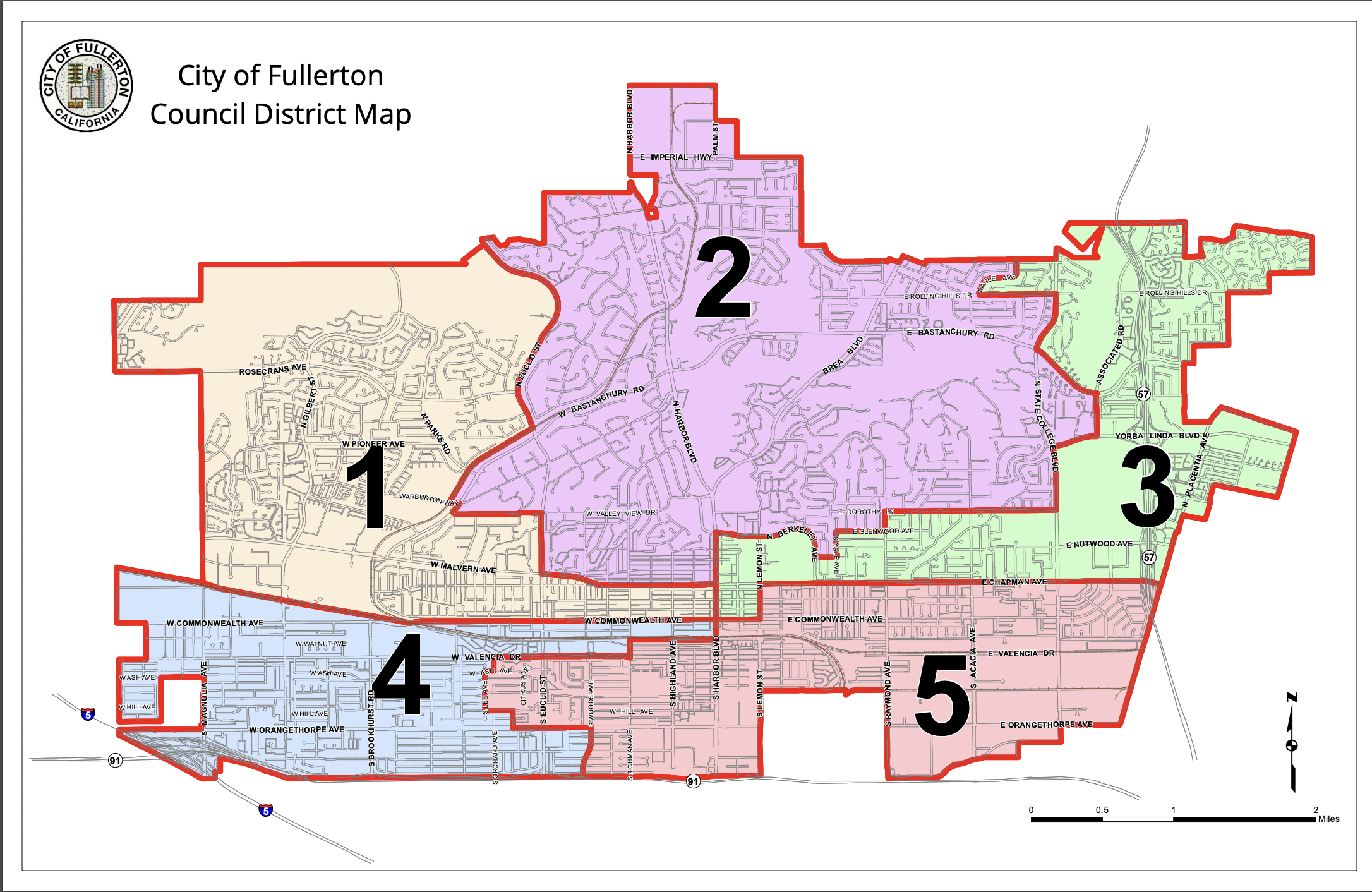 According to the Fullerton City Clerk’s filing log, as of July 31 there were 2 City Council candidates who pulled papers for District 1 on July 13. Only one of them, Fred Jung, has qualified (by obtaining the required number of signatures). Jung has been endorsed by the Democratic Party of Orange County, council members Ahmad Zahra and Jesus Silva, as well as other elected Democrats. The other, Andrew Cho, has not filed but in a press release said he is running with the endorsement of Fullerton’s current appointed Mayor Jennifer Fitzgerald, as well as a host of other past and present Republican elected officials.

District 1 has a plurality of Asian American voters, mostly Korean, and both candidates are Korean Americans. Jung describes himself as an immigrant who came to the US from Seoul, Korea at the age of 5. In his campaign announcement, Cho said his father, Stephen Yongjik Cho, helped start the Korean American Coalition (KAC), which is still active today, and boasts County Supervisor Michelle Park Steel, among others, as “products of KAC,” according to the KAC website.

The District 2 competition started well over a year ago, when 2 people who had served on the Planning Commission together each formed a campaign committee. Despite reporting a balance of $18,000 for his campaign, Chris Gaarder has announced that he is not running and has not pulled papers. Nick Dunlap has pulled but has not filed as of July 31. He has raised $33,000 in the last 6 months from mainly real estate interests such as apartment owners, property management, and the mortgage industry and includes a $2,500 contribution from the Apartment Association of Orange County PAC for a total of $50,000 as of June 30.

Chuck Sargeant, who came in tenth out of 12 candidates with 3.8% of the votes in the 2016 at-large City Council contest, is the only candidate who has qualified to run in District 2. Though he initiated his campaign in 2019, he has not yet reached $2,000 in contributions to qualify his committee as of July 31.

Two elected officials have pulled papers to run in District 4. Bruce Whitaker, who has served on the City Council for 10 years, pulled papers early but has not yet filed as of July 31. His semi-annual campaign finance filing shows a balance of $13,594. Aaruni Thakur, the Fullerton School District Trustee for Area 1, is qualified for the ballot but has no semi-annual campaign finances to report as his campaign did not qualify until July 1.

Incumbents for Fullerton School District Trustee Areas 2 and 5 are running unopposed as of July 31. Both Hilda Sugarman and Jeanette Vasquez will not appear on the ballot if there are no challengers by the August 7 deadline.

As of July 31, Joanne Fawley is running unopposed for another term as Fullerton Joint Union High School District (FJUHSD) Trustee in Area 2. In FJUHSD Trustee Area 3, Dr. Vicki Calhoun, who came in second out of 4 candidates on the ballot for Orange County Board of Education Trustee Area 4 on March 3, has no challengers as well as of July 31. However, because incumbent Andy Montoya, who has served on the board since 2012, no longer lives in the district, he will not be running for re-election and the period to file will be extended to August 12.

Three candidates have pulled papers for the vacated seat in Trustee in Area 4 of the North Orange County Community College District, formerly represented by Molly McClanahan. Miguel Alvarez, Evangelina Rosales, and Yisel Cuevas pulled papers, but only Alvarez has submitted his declaration of candidacy as of July 31.