Did you know that Placentia is the place where the first Macadamia tetraphylla trees in California were planted? I didn’t know that until I discovered a file in my folder of suggestions that pointed me to these Australian nut-producing trees. They were planted prior to 1890 by a mysterious commune of Spiritualists known as Societas Fraternia, more commonly known as the Placentia Grasseaters, which the Anaheim Gazette once called “the oddest religious cult ever organized in California.” 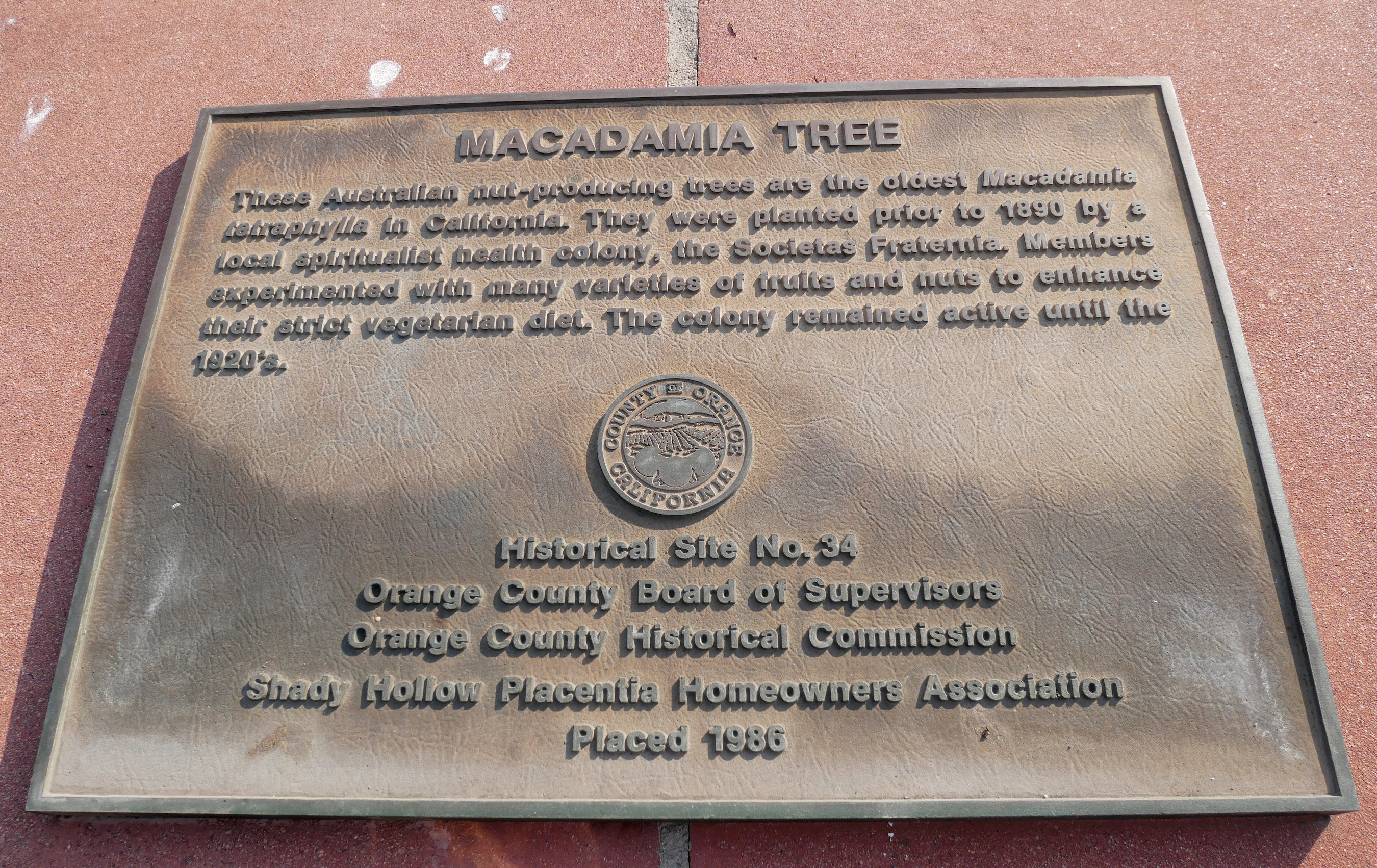 In order to find out more information about the Grasseaters, I emailed Michelle Meades, History Room Librarian at the Placentia Public Library, who was able to point me in the right direction. According to a presentation developed by Supervising Librarian Wendy Amireh and Kathy Frazee of the Placentia Historical Committee, the Grasseaters were “a Spiritual vegetarian community who were regarded with some skepticism by their neighbors. The group, or what might be seen as a cult, lived on the Hinde property in George Risdale Hinde’s home, a two-story, fourteen-room mansion on 24 acres near the intersection of Palm and Placentia Avenue. They were an intriguing group of individuals that stirred up national scandal in 1879.”

The Grasseaters definitely had their roots in modern Spiritualism. In fact, the Hinde family had been prominent in English Spiritualism in the first half of the 1870s. In early 1876, George R. Hinde, his brother, and their families came from Darlington, England, where the brothers had inherited their father’s successful brewery business and enjoyed a comfortable and affluent position. George Hinde and his wife Hannah were remembered as “friendly, intellectual people, interested in music and good entertainment, as well as their spiritualism.”

Speaking of spiritualism, one of the most renowned spiritualists to come out of Victorian America was Cora Scott Hatch. She met the Hinde brothers while she was living for 2 years in England, and together they developed the idea for a spiritualist colony in California, one that didn’t have any particular dietary doctrine. Led by Cora’s “higher guides,” George, with his family, selected 24 acres in Placentia on which he founded his colony and constructed his mansion. Cora stayed with them until the plans for the house were completed, then departed in April of 1876.

Around his house George Hinde propagated many fruit trees and vegetables. Even though George clearly affirmed in interviews that his original intent was to found a Spiritualist colony, not a fruitarian colony, the quality of his produce was highly praised by many. Walnuts were grown in this area as a major commercial crop before oranges dominated the economy and George Hinde developed a new walnut variety that he named Placentia Perfection; it won acclaim at the Chicago World’s Fair in 1893. In fact, you can still see an offshoot of one of his trees growing in the Fullerton Arboretum today. Apparently, they raised the finest fruits and vegetables, and made walnut, peanut, and olive oils.

People came from long distances to buy their produce. However, the only public contact the colonists had was for the purpose of advertising their crops. Efforts to return to the brewing trade and an attempt to import ferrets from England to clear pests from their groves were both unsuccessful, so many troubles and much litigation soon plagued the Hinde family.

In 1878, Dr. Louis Schlesinger arrived in Placentia, claiming to have been led by his own guide spirits to Hinde for the purpose of forming a great society that he would call Societas Fraternia. Schlesinger became the resident medium in Placentia and President of the Societas Fraternia in partnership with George Hinde. Under Schlesinger’s influence, dietary restrictions were imposed since he believed that “cooking destroyed the spiritual essence and so the nutrition of food.” Therefore, everything had to be eaten raw, which meant no meat or dairy were allowed. The society used only the fruits and vegetables they grew, as well as the cereals they raised and ground themselves. 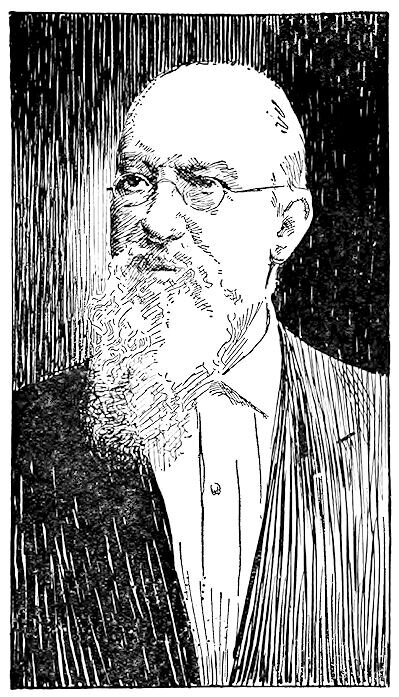 Hinde seemed to agree with Schlesinger and added a more religious motive when discussing the bounty of the land. “We partake of all those productions in their natural state fresh from the orchard, garden, or field, full well realizing that human manipulations of any form of food is equivalent to saying that the Good Father or Creator left said food imperfect, and that we can improve upon it,” Hinde said.

In 1879, it was outside awareness of this severely restricted diet that caused problems for the colony. According to the Placentia History Room, there was a Reverend Toombs who registered a complaint with local authorities that Hinde’s 4 children were being starved to death. The colony was then raided, and an infant was taken from Mrs. Hinde and later placed in the care of a neighbor. Because Orange County was still part of Los Angeles County at the time, the case was tried at a distant court in L.A., where it was decided that the Hindes did not have criminal intent to harm their children. However, they were found to be so much under the influence of Schlesinger that the jury felt sorry for them. The jury determined that the diet was favorable to health, George Hinde was acquitted,  and the infant was returned to its mother. Activities such as this led to the Grasseaters having other names: Starvationists and Faithists.

The Anaheim Gazette wrote a story in May of 1879 that tells how Hinde and Schlesinger planned to frighten neighbors into thinking Placentia was haunted. It’s possible that they were trying to convince the community of their ability to contact the dead. Strange lights caused by kerosene-soaked cotton balls and shadowy movement near an old adobe woke up the dogs owned by Samuel Kraemer and the dogs took off on the trail of a mule with a strange-looking rider. The rider turned out to be George Hinde.

Some boys from Anaheim were later alerted by the barking dogs, went outside, and saw the adobe in the flickering light. They threw a stone at the doorway and Schlesinger’s head appeared in the window. He shouted, “Be Gone! Disturb me not! I am in converse with the spirits.” These young men from Anaheim who exposed Schlesinger that night threatened to tar and feather him. Despite some local acceptance from people who joined the Grasseaters, Schlesinger was asked to leave the community in 1881.

Two longtime residents of Placentia stated that, as children, they were instructed to stay away from the colony and they never went there. Tales circulated that free love was practiced at the commune and members who died were buried on the property under a certain tree.

Financial problems persistently plagued George Hinde and the Societas Fraternia, but this didn’t dissuade new followers from joining. They would bring their children with them and keep them out of the local school. Two boys said they “were tired of eating carrots and turnips” and fled from the colony. They got as far as L.A. before being returned to their parents.

In 1890, the Society was headed by George Hinde, William Wiederhold, and Walter Lockwood who went by the name Thales. According to former Orange County archivist and longtime local historian Phil Brigandi’s website OC Historyland, “when asked why they wouldn’t answer census questions, Walter Thales explained that it was because they were not citizens of the United States but citizens of the World.” That year each of them had to pay a $50 fine since they wouldn’t participate in the national census, saying they could not “support such pride in the size of the country.” Hinde did, however, cooperate with local growers to find a new spray to combat scales on the fruit. Interestingly, he reportedly destroyed 100 beehives, which represented a loss of $300 and 3 years’ labor when neighbors accused his bees of “robbing their orchards.”

In 1891, the Grasseaters had 13 living members with at least 9 members of the colony deceased and buried on the property. George Hinde died in 1911. Walter Lockwood died in December 1921. The directorship of the property and funds were then contested by Mrs. Wiederhold who objected to her husband’s leadership, and the land went into the hands of the public administrator when William Wiederhold died several months after Lockwood. The last surviving member of the clan was Frank Benjamin Hinde, George’s son, who died in 1924 at the age of 45 and was also buried in sackcloth on the estate grounds.

George G. Key tells in his Placentia History that when Mrs. Wiederhold and her son came to give condolences to his mother after the death of his father in 1916. She offered, “If you ever have a message for your husband, just let me know because his spirit is resting on our mantle,” to which George’s mother replied, “We have four mantles in our home and I believe if he was going to roost on any mantle, he would come home to roost.”

In 1931, the Placentia Courier reported that James Tuffree had bought the final remaining 10 acres of the Societas Fraternia land and the house with the Round Tower. Supposedly, Schlesinger was asked about the round rooms and he explained that they were round to facilitate the air circulation. But according to George Key, James Tuffree said there were no round corners in the house. So, maybe the ghosts did stay up in the tiny corner of the bedroom where the walls and ceiling met.

Today, the only reminder of the Grasseaters is the plaque commemorating the macadamia nut trees planted by George Hinde that can be viewed on Macadamia Lane near the pool of a private community just west of Placentia Avenue across from the Albertson’s market. The inscription on the historical plaque reads, “These Australian nut-producing trees are the oldest Macadamia tetraphylla in California. They were planted prior to 1890 by a local spiritualist health colony, the Societas Fraternia. Members experimented with many varieties of fruits and nuts to enhance their strict vegetarian diet. The colony remained active until the 1920s.” While Orange County Historical Site No. 34 is listed with the address as 136 Palm Circle Road, the plaque is actually located on Macadamia Lane, but can be seen through Google Street view. 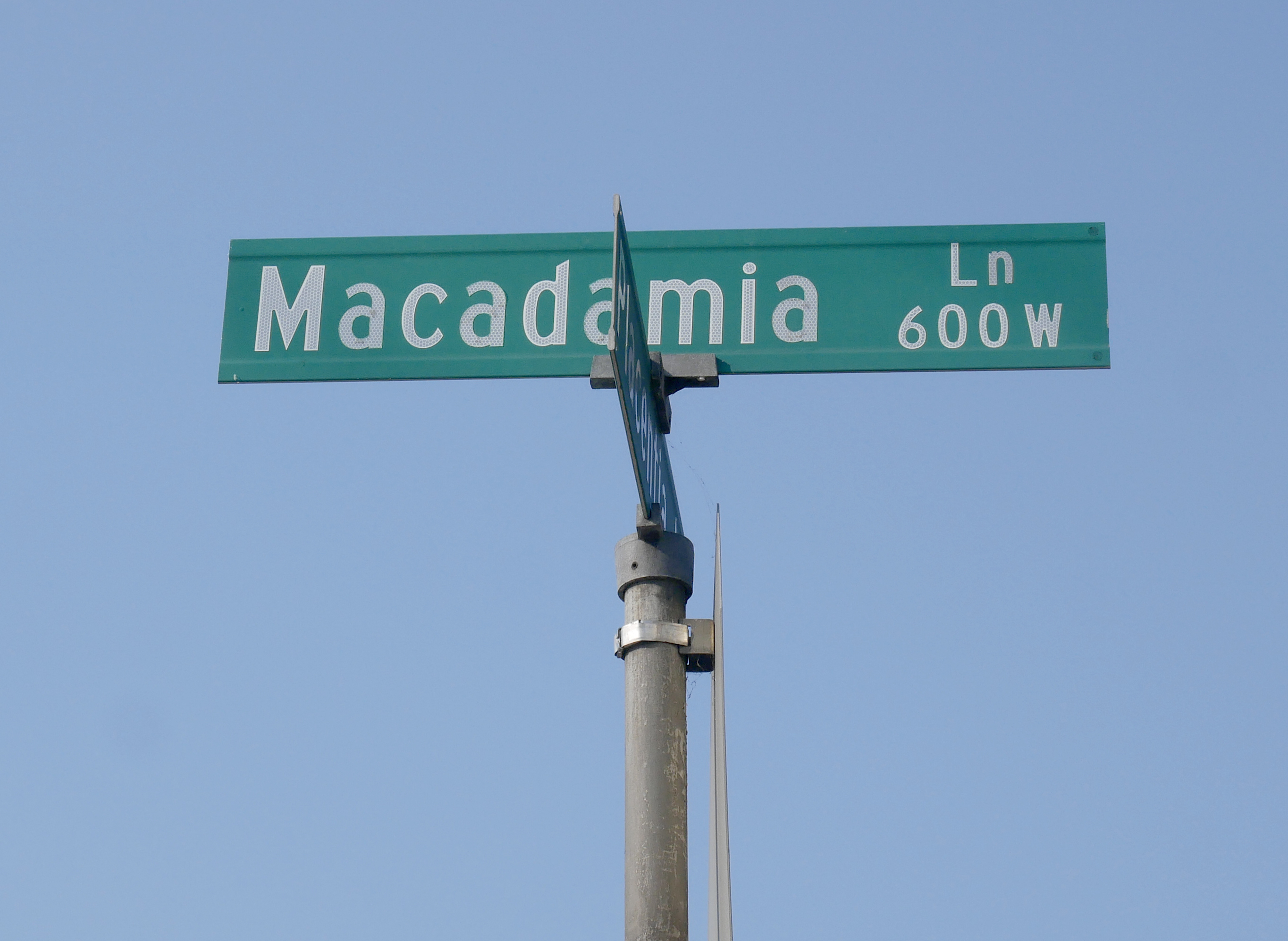