On Veterans’ Day, November 11, 2009, Joe Pak, a loan officer, had occasion to go to the Orange County Recorder’s office at the Civic Center in Santa Ana (Joe’s formal name is Dongwoo Joseph Pak, but everyone knows him as “Joe”). He strolled around the area after concluding his business. He saw a jet plane, a war plane—that was a memorial monument to World War I, World War II, the Korean war, and the Vietnam war. He noted 56 names of men who died in the Korean war.

Pak laid a flower at the foot of this monument to pay his respects. And he began to think. He had had business in Washington, D.C. as a member of the National Council on Disability, appointed by President Barack Obama, and for three to four years had visited the capital often. His disability resulted from contracting the polio virus as a child.

Pak had visited the memorials to all the wars there in Lincoln Park. “I was shocked to see that not one name of any of the men who gave their all for the freedom of Korea was listed,” he said. “That  was  a stark contrast to the Vietnam War memorial. Where do the families of those Korean War soldiers go to remember their loved ones? I approached Jin Oh Kim, 21st president of the Korean American Federation of Orange County. There are 350,000 Korean Americans in Orange County. I explained about the names. I had started researching to get all the names. Mr. Kim said it was a project he would work on as president of the Committee.”

The Orange County Korean War Memorial Committee was incorporated with the state of California August 7, 2013, and Federal non-profit status was duly obtained.  Currently, the Committee consists of seven men and one woman. Pak has been secretary-general of the organization since day one. 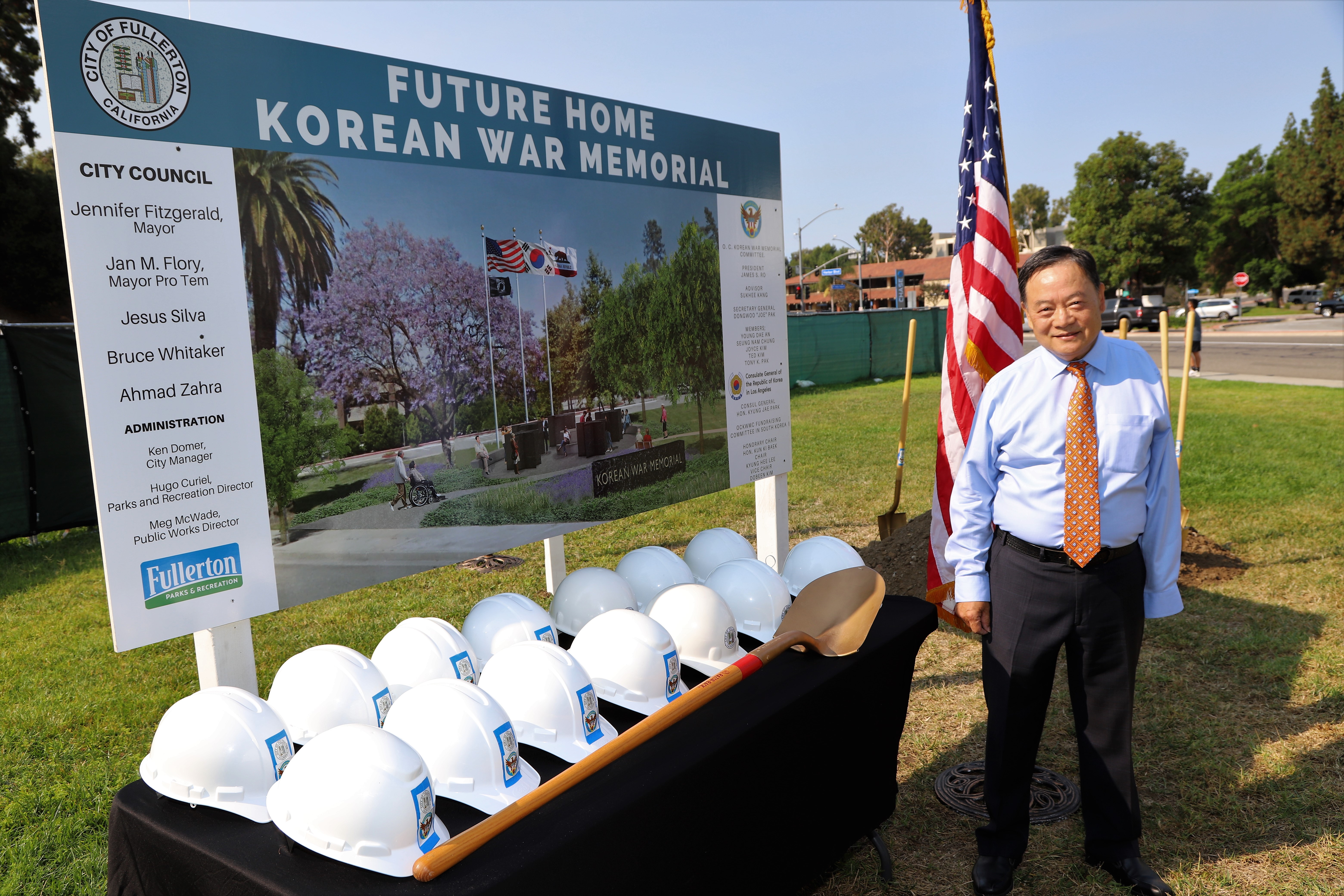 Joseph Pak, founder of the Orange County Korean War Memorial Committee stands at Hillcrest Park on the future site of the memorial. Photo by Gaston Castellanos.

“We approached the cities of Orange County—Buena Park, Cypress, La Palma, Irvine, Garden Grove, and even Los Angeles. We promised we would pay for everything, but still they were not interested. The Vietnam memorial in Washington is 246 feet long, and they balked at the thought of that amount of real estate,” Pak said. “In 2013 I met with Bruce Whittaker in Fullerton. He told me that his father was stationed in Korea for a year, and that is where he (Bruce) was born. He said it was important to recognize the sacrifice of American soldiers. In 2014, we signed a memorandum of understanding (MOU) with the city of Fullerton for the construction of a Korean war memorial.”

Pak described planning the project and attempts to raise money. “We were back and forth with the Republic of Korea. A forum there said this would be a great thing. Jin Oh Kim wanted a huge memorial, a $3 million project. Unfortunately, he died in Korea in 2016, and the project came to a full stop.”

James Ro was the next president of the Committee. Pak thought about the scale of the project. He recalled Douglas MacArthur, the last five-star general and hero of that war.  Pak then conceived of a five-star configuration that could be six feet tall. Each star would have 10 panels with 750 names per panel. “A compact project,” Pak noted.

“If we had more money, we would build it bigger and better,” Pak said. “But the most important point of this project is to have the names of all the soldiers who gave their precious lives.”

There will be 36,492 names that will include men from United States and its territories—Guam, Puerto Rico, American Samoa, Northern Mariana Islands, and U. S. Virgin Islands. Of those, 2,611 are from California. Names were obtained from the National Archives.

The original MOU had expired so the Committee obtained a new one on November 5, 2019. Other council members had connections to Korea, according to Pak. Jennifer Fitzgerald’s grandfather had served in Korea, Jan Flory had been there in 2013, and Sharon Quirk-Silva was an honorary member of the Committee; her father had been injured in that war.

“We feel very fortunate to be located at the duck pond in Hillcrest Park,” Pak said.  “There will be no damage to the environment, Hugo Curiel (Fullerton Parks and Recreation director) explained to us. It will put Fullerton on the map. It will be historic, one-of-a-kind. People from New York coming to Disneyland will find it listed as ‘where to go’ in Southern California.”

“The Committee will promote the site a lot through the Internet,” Pak said. “We will have a website that will include a list of donors, special recognition of significant donations, and a portal for making donations online.”

Pak explained that the purpose of a location in Hillcrest Park was to be near the five-panel war memorial located near Harbor Boulevard that lists the names of Fullerton soldiers from World War I, World War II, the Korean war, the Vietnam war, and the War on Terror. “There are Veterans’ Day activities there, so we wanted to be near that monument.”

At this point, the Committee was short about $170,000 of their commitment of $720,000 to the City, of which $50,000 has been paid, according to Pak. He said the Republic of Korea had approved the project as an overseas monument and approved in principal $210,00 in funds. The Committee will continue to pay for any necessary maintenance and repair to the memorial.

“We would like to get this done by early next year. It has been my mission since November 11, 2009, as one way to show appreciation and gratitude to the United States of America.  It has been too long, 67 years since the armistice,” Pak said. The Korean War began June 25, 1950 and ended on July 27, 1953.

Mr. Pak has served as an assistant to Assemblywoman Sharon Quirk-Silva since 2013.  “Lately,” he said, “I am happy to hear people on both sides of the ocean call me a patriot for this Korean war memorial activity.”