Pathos and humor walk a tightrope in this delicately-written, beautifully-acted, and sensitively-directed film.  Both timeless and current in its themes, “Driveways” is a quiet film that lingers on scenes long enough for us to get to know the 3 principal characters and to hope that life will turn out well for them. Some of the action is predictable but nuance, subtleties, and careful editing keep us invested in both plot and human interaction.

Kathy (Hong Chau), a single mother raising an 8-year-old son, Cody (Lucas Jaye), has arrived at the home of her recently deceased older sister in order to clean out the house and prepare it for sale.  Korean War veteran and widower Dell (Brian Dennehy) lives next door and sticks pretty much to himself. Gruff and laconic, Dell is not the kind of neighbor who welcomes new faces, and a misunderstanding ensues almost immediately when Kathy accuses him of squirting her son with the hose. But Dell agrees with Kathy when she tells him that she has cautioned her son not to speak to strangers.

We get some backstory as Kathy takes on the monumental task of cleaning out the mounds of clutter and decay, including a dead cat, in the house of her sister, who was 12 years older than Kathy, and whom Kathy hadn’t seen in several years. Feelings of guilt nag at her for her own neglect in not trying to keep up their relationship. But Kathy is a good Mom and has a protective and endearing relationship with Cody, a shy child, not comfortable with some bullying neighborhood boys interested in getting Cody to box with them. He also has an embarrassing habit of vomiting in situations that frighten and overwhelm him and he finds himself more comfortable around Dell than with his aggressive peers. 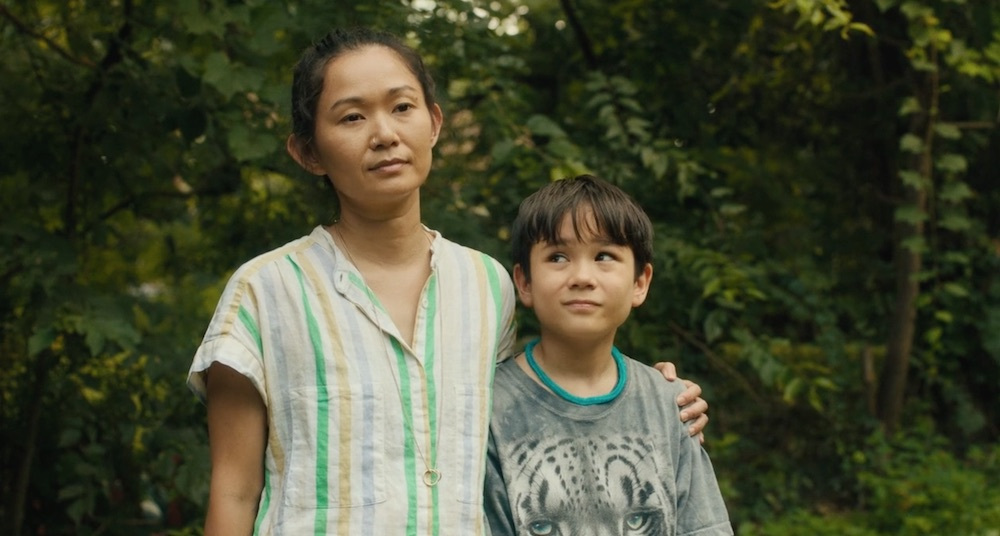 We also learn that Dell had a wife named Vera and has lived alone since her death. He regrets not having spent more time with her and not appreciating her thoughtfulness and gentle company. Dell eats alone each night and his only diversion is going to the V.F.W. Hall to play bingo. But his closest friend is beginning to lose his memory and when he forgets to pick Dell up for bingo, it is Kathy who drives him to the Hall.  Noting that Kathy has not been able to afford to have the electricity turned on in her late sister’s house, Dell runs an electrical cord from his house to hers. He is also happy to have Cody in his home when Kathy is running errands and Cody is comfortable finding a cozy corner in Dell’s house for reading, Dell’s comment being, “He’s good company.”

There are some unexpected plot developments in “Driveways,” but they happen so seamlessly and are so generic to the situations that we never feel manipulated. Screenwriters Hannah Bos and Paul Thureen along with director Andrew Ahn trust their audiences to fill in gaps that don’t need unnecessary explication. In this they are aided by peerless actors.

We should also note that Brian Dennehy passed away in April this year of cardiac arrest after a lifetime acting in stage, television and movies. He won two Tony Awards, a Golden Globe, and received 6 Primetime Emmy nominations. Although born in Bridgeport, Connecticut, he was often cast as an Irish Catholic priest and seemed iconic in that role. Passing away at age 81, Dennehy had appeared in 180 films, working until the end.

“Driveways” is available through Video on Demand.