Since we’re at the start of the school year, I thought it would be appropriate to focus on an organization with a history of helping students that continues to this day. The Leon Owens Foundation (LOF) has been a part of the Orange County community for 26 years, providing encouragement and financial assistance to high school and college students who are trying to improve their lives through education.

Recently, I had a chance to interview via email Shirley Owens McClanahan who has been part of the Leon Owens Foundation since its inception in 1994. “The Owens family has been in Fullerton since 1943, when my father Alfred and his brother Will made the great migration from Texas to California,” she told me. “The foundation was started in memory of my brother Leon ‘Jack’ Owens because of his impact on kids in the neighborhood (Maple Community). The foundation was started by my sister-in-law Mary Owens, Karol Singleton, along with a host of family, friends, and local businesses. Our initial goal was to be an educational foundation to provide college scholarships. To date, we have provided nearly two hundred college scholarships.” 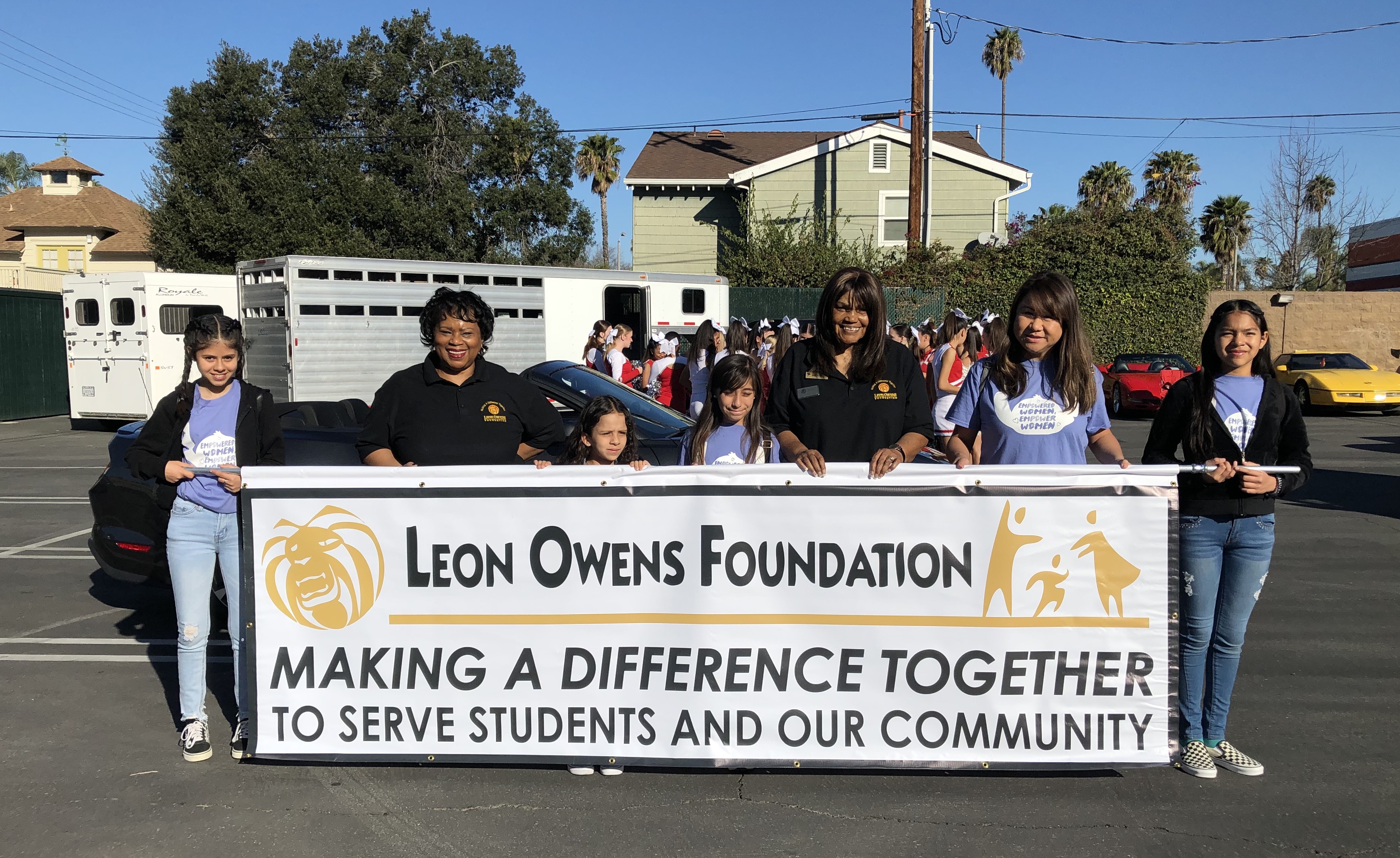 According to the LOF website, “Leon Owens was a devoted husband, loving father, kind-hearted brother, and civic leader. He was a strong family man who spent countless hours raising his 3 children and mentoring other neighborhood children.” Leon received his early education at Maple Elementary School and Wilshire Junior High. While attending Fullerton Union High School, he was employed by Bridgford Foods in Anaheim. In 1952, after graduating from FUHS, Leon enlisted in the United States Navy, where he played baseball. He used his exceptional baseball talents to help his team win numerous awards, including the All Navy Pacific Island Championship in 1952.

Upon receiving an Honorable Discharge from the Navy, Leon returned to Fullerton. He enrolled at Fullerton College, resumed his job at Bridgford Foods, and played softball with the Pomona Bombers. In 1960, Leon married Mary Burch and they had 3 children. His son Darren lettered in baseball, basketball, and football at FUHS and attended the University of New Mexico. Leon’s daughters Karen and Sharen were active in Drill Team and Cheerleading at FUHS. They both graduated from the University of Southern California. Leon was very proud of his children and cheered them on in all their extracurricular activities.

Leon was an active member of the Fullerton community. He enjoyed being a volunteer coach at the Fullerton Boys and Girls Club and was also involved in the Fullerton High Athletic Booster Club. He applied his knowledge and love of sports to enrich the lives of his children, and the children of Fullerton, by coaching Pop Warner Football and Little League Baseball. In 1971 and 1972, Leon coached his son Darren’s Little League team to win the Minor League City Championship title, and in 1973, the team won the Major League City Championship. 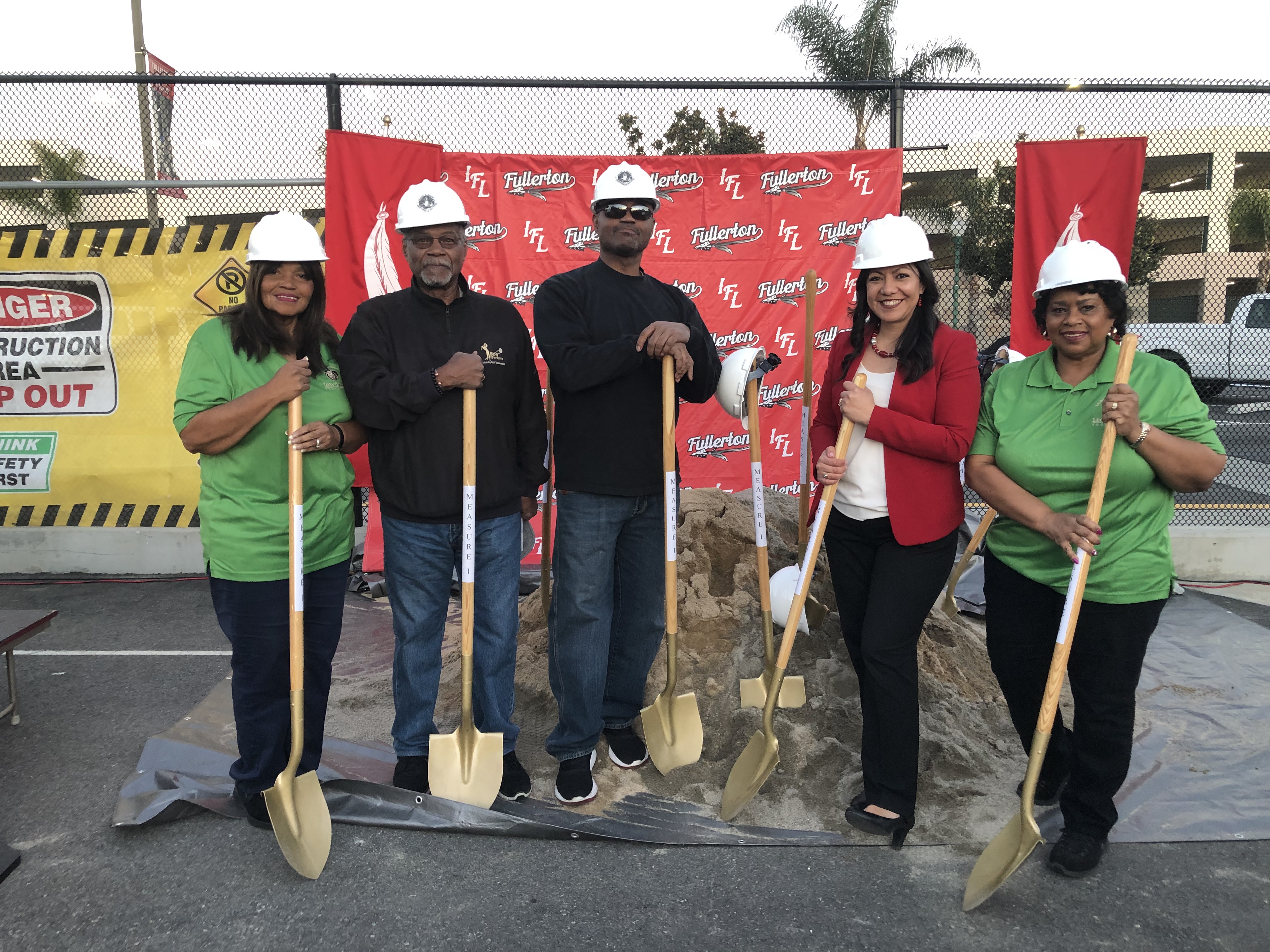 Leon Owens Foundation leaders and Principal Laura Rubio at the groundbreaking ceremony for the new FUHS gym. Note: Photo taken prior to the pandemic.

According to the 2010 book, A Different Shade of Orange: Voices of Orange County, California Black Pioneers by Robert A. Johnson and Charlene M. Riggins, Mary Burch Owens moved from Los Angeles to Fullerton in the early 1940s, when she was a small child. In an interview with the book’s authors, Mary said, “The young man that lived across the street from me in Fullerton, he was older than I. He was one of the older ones. I never played with him because he was older, but he was real friendly. He delivered papers every Sunday to us. He had a little wagon, and he’d go all through Fullerton with the Sunday papers. He was just a real good friend. He was in the navy. When he came home, he was asking about where did we move, my sisters and myself. So, he came to visit us. We just talked. We had so much in common. I asked him all about his family…So I started seeing my husband-to-be; he’d come by maybe once every other week.”

“We started seeing each other more and more. Leon was a very likable guy, all kinds of friends. And the Bridgfords really liked him, especially Mr. Bridgford…And Leon really liked him. Leon worked for him until he died in 1993,”  Mary Owens said in the book. “As a result of that, we had a huge, huge funeral that was unbelievable. The people were wonderful. After all this had happened, a friend of mine (Karol Singleton) said, ‘Mary, you gotta do something in memory of Leon.’ So, we did. We started a foundation.”

Over the years, the Leon Owens Foundation has been able to broaden its scope to make a positive impact on a student’s education at an early age. “Through our over 25 years in the community, the most rewarding part is not only providing college scholarships but working with students in grades K-12,” wrote Shirley Owens McClanahan in her email. “It is also the relationships that continue with the LOF college scholarship recipients throughout their time at college and after they graduate. Many of them participate at our events or have been part of the mentoring programs.” 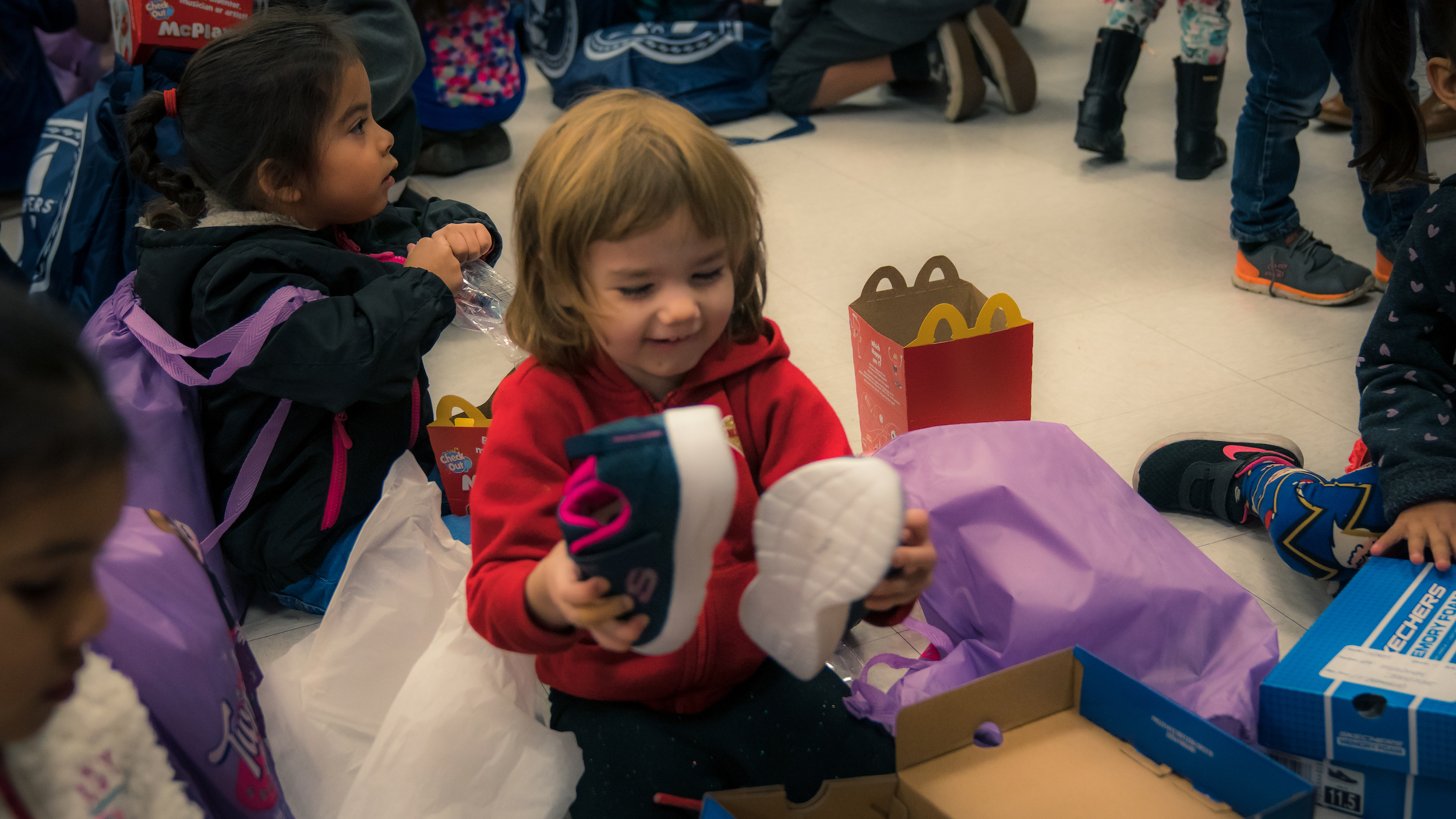 Ms. Owens McClanahan said Mary Owens was a kind, stern, and strong woman, who stood by her faith and truly wanted to help young people to achieve their educational goals. Ms. Owens McClanahan noted, “She greatly missed my brother, but was excited about having the opportunity to continue encouraging kids about pursuing their college dreams. She also loved volunteering at Maple Elementary. For several years, the Foundation donated toys to kids in the Maple community during the holiday season and the event was held at Lemon Park. Mary also enjoyed assisting unwed moms and foster children residing at Crittenton Homes. After several years of battling Alzheimer’s, Mary passed away in 2018.”

Shirley Owens McClanahan described her brother Leon as kind, patient, dependable, a great listener, and the best big brother. “He probably would be a little surprised by the foundation having his name on it but so happy with the work that has been done for young people,” she said. “The key element is planting the seed and stressing the importance of education.”

However, the COVID-19 pandemic has affected the organization’s fundraising efforts. Back in June, they had to reschedule their Charity Celebrity Golf Tournament and Scholarship fundraiser to June 1, 2021. Ms. Owens McClanahan explained that in the fall, they would normally host a College Bingo Night but due to COVID-19, they will not be having this event.

She said, “We definitely could use the continued support of our community. If anyone would like to contribute to the Leon Owens Foundation Scholarship Fund, they may do so via our website, www.leonowensfoundation.org. It is through the combined efforts of our partners that we can and will continue ‘Making a Difference Together’ to serve students and our community.”