Affirmative Action on the Ballot: A Closer Look at Prop 16

Californians are voting on a number of propositions that deal with a wide variety of issues this election season. Here’s a closer look at Proposition 16, which deals with affirmative action. This is a summary of information taken from the official California voters guide and the website Ballotpedia.

A “yes” vote supports this constitutional amendment to repeal Proposition 209 (1996), which stated that the government and public institutions cannot discriminate against or grant preferential treatment to persons on the basis of race, sex, color, ethnicity, or national origin in public employment, public education, and public contracting. 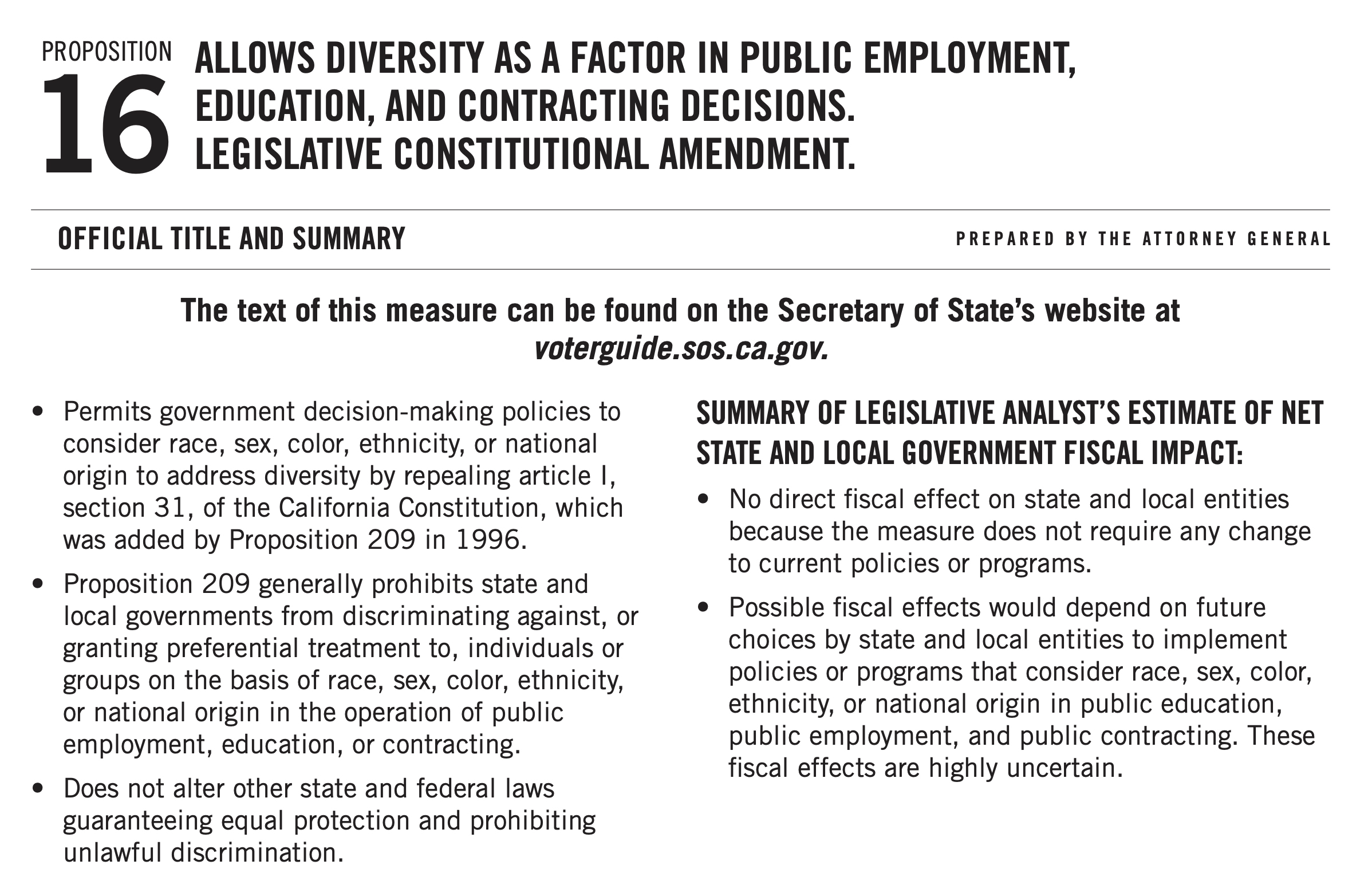 Despite living in the most diverse state in the nation, white men are still overrepresented in positions of wealth and power in California. Although women, and especially women of color, are on the front lines of the COVID-19 response, they are not rewarded for their sacrifices.

Women should have the same chance of success as men. Today, nearly all public contracts and the jobs that go with them go to large companies run by older white men. White women make 80¢ on the dollar. The wage disparity is even worse for women of color and single moms. As a result, an elite few are able to hoard wealth instead of investing it back into communities. Prop 16 opens up contracting opportunities for women and people of color.

Yes on Prop 16 means creating opportunities for women and people of color to receive public contracts that should be available to all of us, which improves access to quality education, both K–12 schools and higher education, for all of California’s kids, a well as invests wealth back into our communities as opposed to continuing to allow the rich to get richer.

We live in the middle of an incredible historic moment. In 2020, we have seen an unprecedented number of Californians take action against systemic racism and voice their support for real change. At the same time, our shared values are under attack by the Trump administration’s policies. We are seeing the rise of overt racism: White supremacists on the march, the daily demonization of Latino immigrants, Black people gunned-down in our streets, anti-Asian hate crimes on the rise, women’s rights under attack, and COVID-19 ravaging Native American communities.

The California Legislature wants you to strike these words from our State Constitution: “The State shall not discriminate against, or grant preferential treatment to, any individual or group, on the basis of race, sex, color, ethnicity, or national origin in the operation of public employment, public education, or public contracting.”

Those words—adopted by California voters in 1996 as Proposition 209—should remain firmly in place. Only by treating everyone equally can a state as brilliantly diverse as California be fair to everyone.

Prior to the passage of Proposition 209, California and many local governments maintained costly bureaucracies that required preferential treatment in public contracting based on a business owner’s race, sex, or ethnicity. The lowest qualified bidder could be rejected. A careful, peer-reviewed study by a University of California economist found that CalTrans contracts governed by Proposition 209 saved 5.6% over non-209 contracts in the two-year period after it took effect.

Prohibiting preferential treatment based on race, sex, color, ethnicity, or national origin is a fundamental part of the American creed. It’s there in our Constitution for all of us . . . now and for future generations. Don’t throw it away.

•Los Angeles County Board of Education

•University of California Board of Regents

Groups opposed to Prop 16 include: