The title refers to the trailblazing feminist leader Gloria Steinem, glamorous, smart, witty, talented and driven.  Director Julie Taymor (“The Lion King”) bases her film about this icon on her autobiography, “My Life on the Road,” and reinforcing the peripatetic nature of Steinem’s life, Taymor uses a familiar motif throughout the film—the Greyhound bus. We see the various actresses who portray Steinem throughout the film on this bus talking to each other about decisions made and values examined. 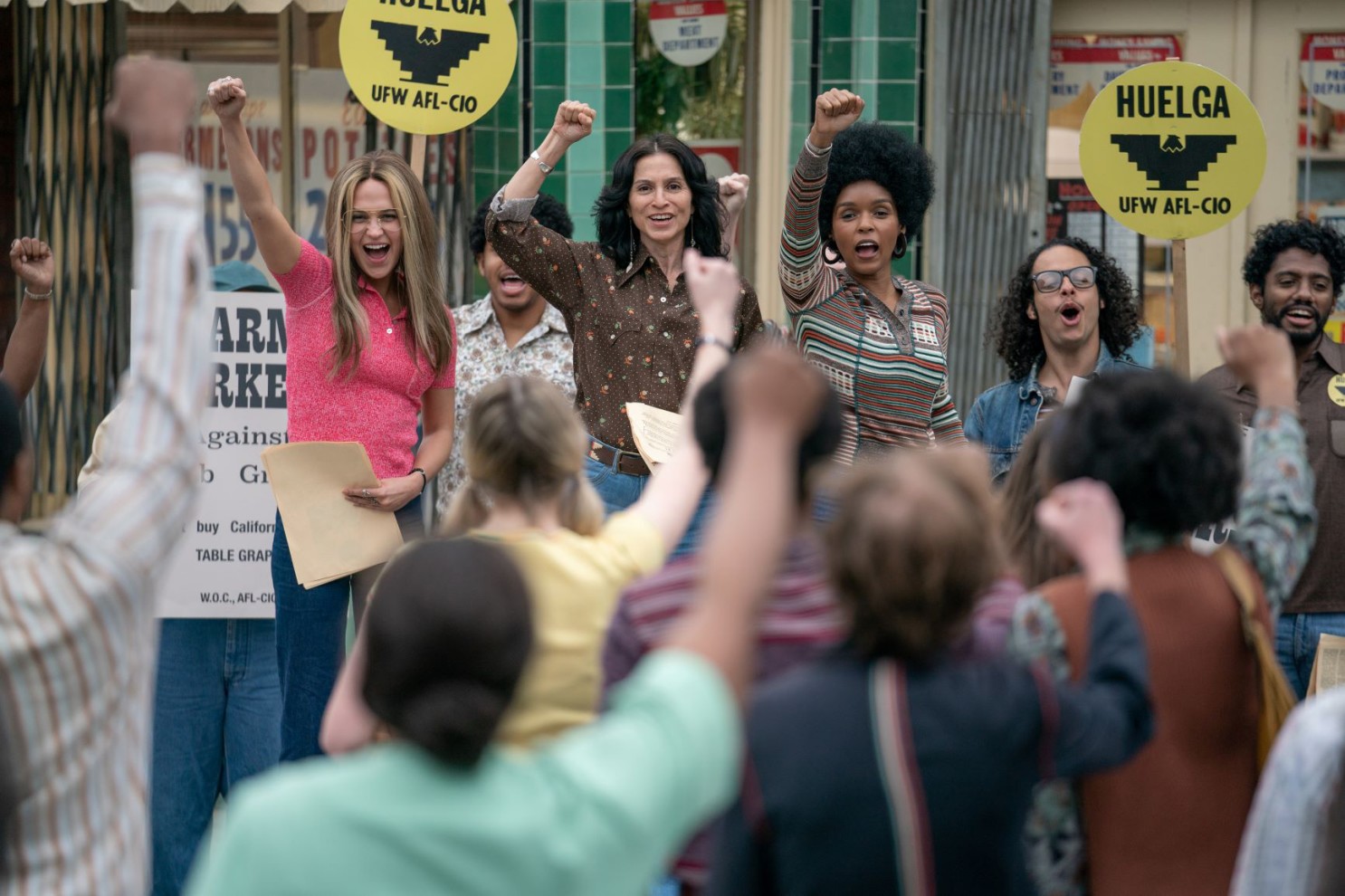 Four actresses portray Gloria Steinem from childhood to the present—Ryan Kiera Armstrong, Lulu Wilson, Alicia Vikander, and Julianne Moore. Much of her childhood was spent on the road with her mother, father, and older sister as they ride in the family car from a dance pavilion on Lake Michigan, run by “Steinemite,” a name her father liked to be called.  On the return to Ohio, Steinemite (Timothy Hutton) would stop at garage sales and pick up items that he would then resell to antique stores.

As a young child, Gloria never knew her mother to be physically or mentally well; a doctor describing her as having a “broken spirit.”  This was the early 1940s and few inroads had been made into studying mental health. One day when she is caring for her mother, Gloria finds some scraps of paper with writing her mother had done as a young woman. She learns that her mother had given up a career in journalism in order to marry and have children. In Gloria’s reaction to this, we see the first glimmer of the talented journalist and independent feminist that she would become.

At 22, Gloria receives a grant to spend two years in India studying the status of women, opening up for her a lifelong interest in working with women within other cultures, which serves her well as she becomes the activist Gloria.  The assignment abroad also caused her to become focused on a woman’s reproductive rights. She finds she is pregnant, and in 1950s London, on her way to India, she visits a doctor who tells her that he will refer her to a safe abortionist but she must promise never to give his name and to do “what you want to do with your life.”  She fulfills those promises.

On her return to the States, Gloria finds work with New York magazine but is frustrated by the assignments that put her on the Women’s Page covering fashion and home design.  In the early 60s she takes an assignment to work as a Playboy Bunny for several months and then to write about the experience.  The article becomes an enormous success, but, eager to shed the image, she refuses an offer to write an entire book about life as a Playboy Bunny.

The movie does a nice job of showing Gloria’s gradual involvement in the women’s movement of the late 60s and early 70s. Working with Dorothy Pitman Hughes and other Black women more experienced in leadership roles, she learns to overcome her fear of public speaking.  Although a dynamite journalist, Gloria has to learn to use her skill with words as she speaks to large crowds at public gatherings. Actual film footage from the 1970s is woven into the movie as we see her growing into the iconic figure she became.

There are also some amusing scenes showing Gloria and friends conceiving, naming, and putting together the first issue of what would become a ground-breaking publication for women—Ms. Magazine. And Taymor weaves in 1970s film footage of the backlash, led by Phyllis Schlafly, against Steinem and the entire women’s movement. “The Glorias” ends with Hillary Clinton’s defeat in trying to be the first woman president and Steinem concluding that the race is not over but is a relay. And the baton will be passed on.

“The Glorias” runs 2 ½ hours and can be streamed on Amazon Prime.