Fullerton City Council voted 4-1 (Whitaker “no”) to approve regulations on short-term rentals (STRs) (such as AirBnb) at their October 20 meeting. Prior to this, the City had no regulations for these businesses, although in August 2020, there were 485 STR listings at 333 properties in Fullerton. 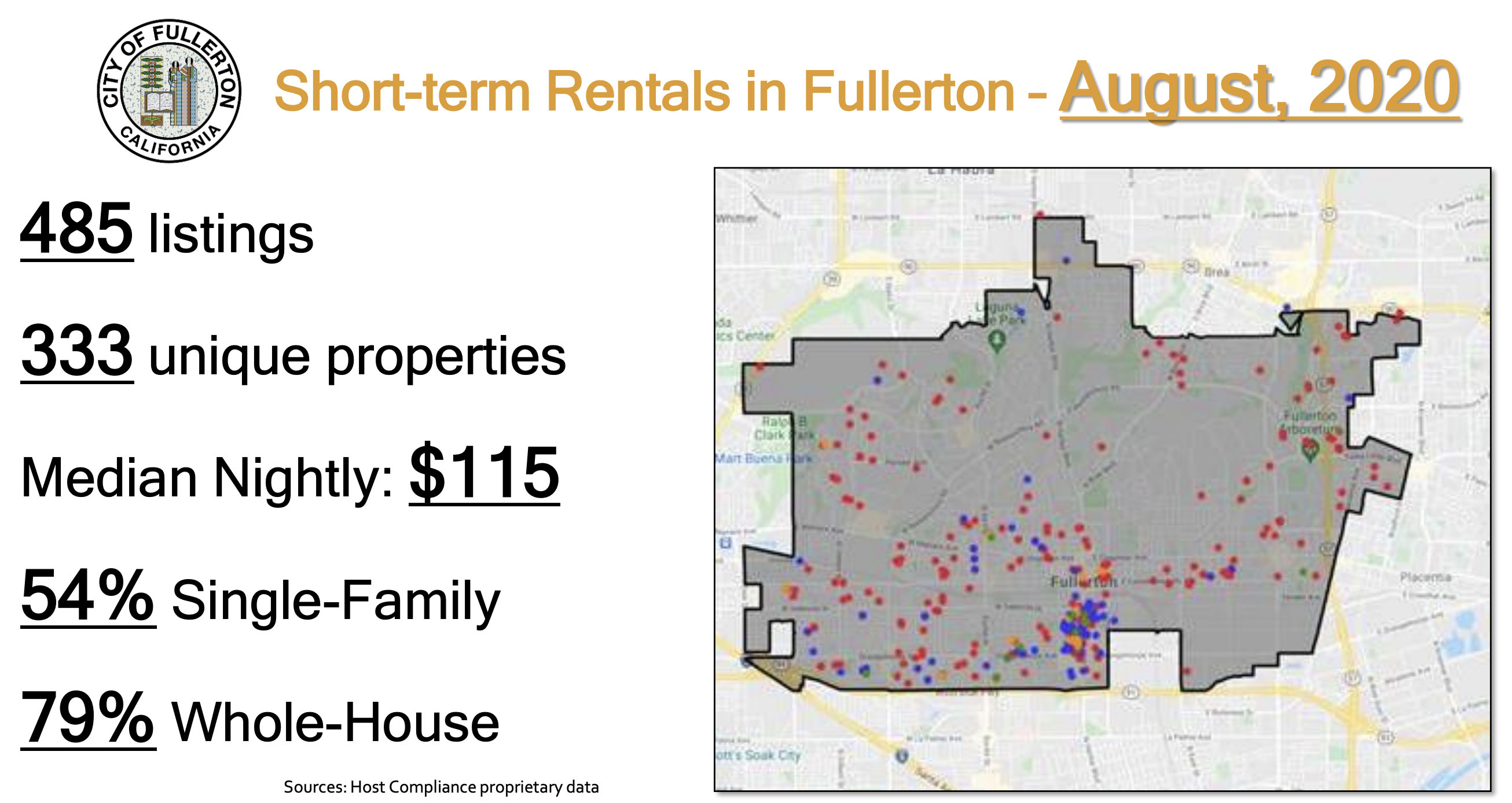 Some local cities, such as Irvine, have banned STRs altogether, while others have passed similar ordinances regulating them.

Fees for administering the STR program would be paid by the operators through a permit fee and a transient occupancy tax (TOT), like hotels are required to pay. Whole-house rentals, which account for 79% of STRs in the City, would be capped at 325.

According to a staff report, goals of the regulations are to allow the use while protecting the residential character of neighborhoods, create a mechanism for Code Enforcement to address bad operators, and ensure operators pay the proper taxes and licensing fees.

Of the 28 e-Comments received from the public on this item, 82% were opposed to the proposed ordinance.

Critics of the ordinance expressed concern about the impacts of noise and parking that STRs can bring to neighborhoods.

Others argued that allowing STRs would reduce the City’s regular housing stock at a time when Fullerton and California face a housing crisis and shortage.

“Please do not allow 325 homes to be turned into hotel rooms,” Danielle Wilson wrote. “Our precious housing stock should be preserved for long-term residents, not tourists.”

Jonah Breslau of the Los Angeles Alliance for a New Economy wrote, “We are living in the midst of a housing crisis. It is a huge challenge for residents of Fullerton to find affordable housing. Forcing them to compete in the housing market with tourists who can pay much more per day than they would as long-term tenants only exacerbates this problem. Do not allow any whole home rentals in Fullerton.”

Peter Barta, an STR operator in Fullerton, said, “We can support the ordinance as written, minus the TOT tax, and with a higher overall cap on whole-house rentals.”

“Considering the City’s current fiscal situation, I doubt there is the capacity to [support] a massive, new code-enforcement and legal effort,” Bane wrote.

After hearing from the public, City Council discussed the ordinance and ultimately voted 4-1 (Whitaker “no”) to pass it.

Councilmember Jesus Silva, who ultimately supported the ordinance, said he was concerned with removing houses from the regular market.

“In this city, we haven’t been able to build housing for the demand that we have, but yet we’re going to be taking units off the housing market,” Silva said.

Mayor Pro Tem Jan Flory countered that there are 330 homes that are off the market right now being used as STRs.

“Under this ordinance, we have a way of getting rid of bad operators, the people who are not observing the rules,” Flory said. “I think that this ordinance is a good balance between people who are already employing this use of their property and protecting the residential character of our neighborhoods.

Councilmember Bruce Whitaker, who voted against the ordinance, suggested the TOT be eliminated and said that the cap on STRs is exceedingly low. He said that at any given time there are many more vacancies in the regular housing market. He argued further that complaints about noise and traffic come from regular housing, not just STRs. Whitaker said that enforcement would create added costs when the City is already financially stressed.

Council member Ahmad Zahra countered that enforcement costs could be recovered by the TOT.

Zahra, who voted for the ordinance, said, “I do appreciate the compromise on the number [of whole house rentals] from the mayor and mayor pro tem.” The original ordinance had called for a higher cap of 500 units.