Film Review: “The Trial of the Chicago 7” Gets Two Hits

Taking place slightly less than 50 years ago, the events of this film resonate with currency. The issues are different but the nation is troubled and divided; demonstrations meant to be peaceful turn bloody; police and protestors clash. “The Trial of the Chicago 7” puts us immediately into the late 1960s by opening with film footage of then President Johnson announcing that he would increase the number of troops sent to Vietnam by 50,000. Resistance to the escalation of this unpopular war resulted in anger, disquiet, and organized demonstrations. By 1968, as the Democratic Convention began in Chicago, hundreds of demonstrators crowded the streets to protest the war. Riot police were dispatched using tear gas and nightsticks to disperse the crowds. Both sides were blamed for inciting the violence. 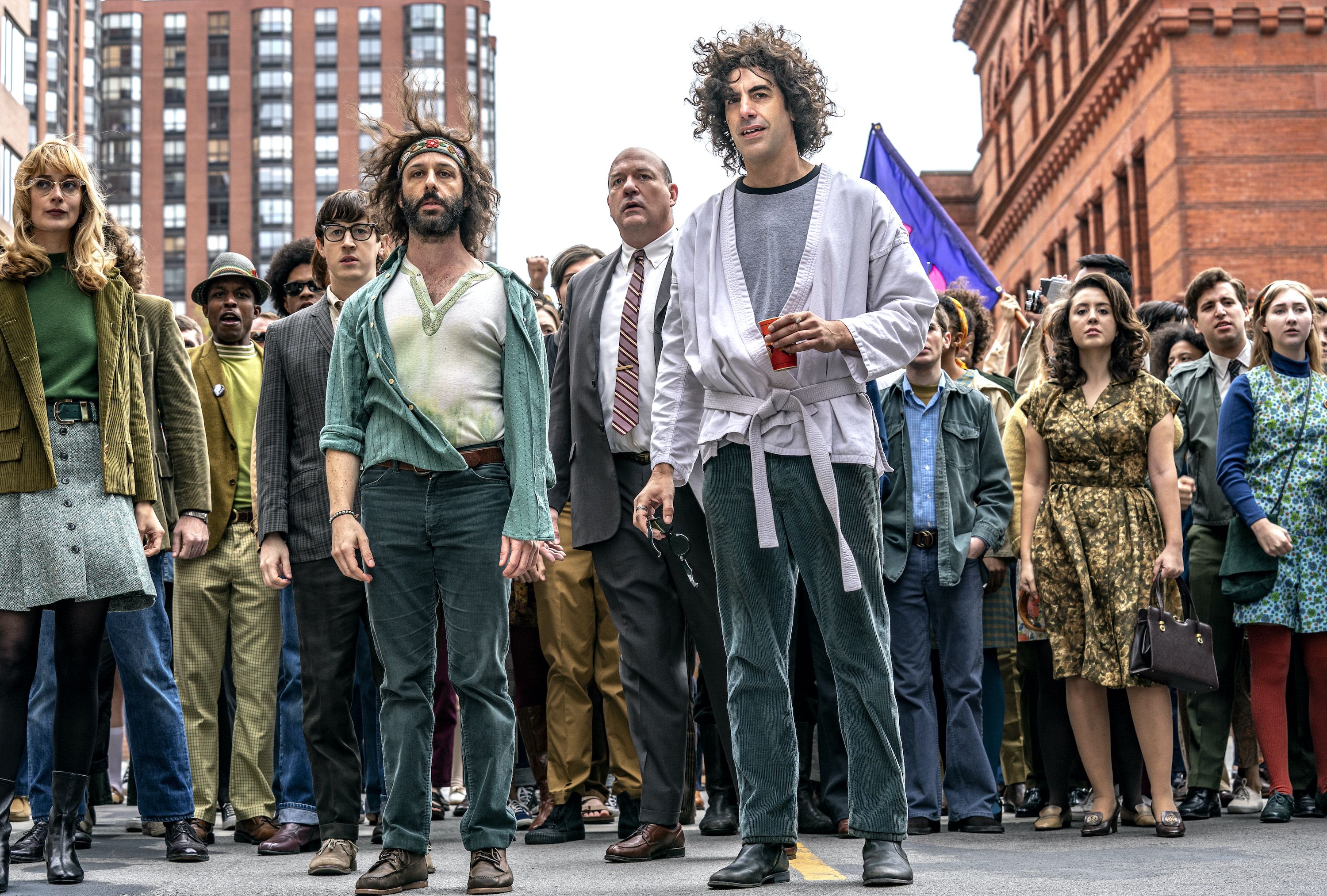 Not only does its relevance engage audiences today but “The Trial of the Chicago 7” distinguishes itself with its polished script by Aaron Sorkin, also the director, and its outstanding ensemble of actors. The actual trial begins in 1969 when newly appointed Attorney General John Mitchell presses charges against 8 conspirators for “masterminding and instigating” violence on the streets of Chicago. The moment is historic as the Presidential portrait of Lyndon Johnson is being replaced by that of the newly-naugurated Richard Nixon. However, there is one flaw in the criminal allegation, noted even by the prosecuting attorney Richard Schultz (Joseph Gordon-Levitt), and the discrepancy is that several of the accused conspirators did not know each other before coming to Chicago and had little or no time to plan a riot.

As we meet the accused, we realize they are a disparate group who have difficulty settling upon any course of action. Tom Hayden (Eddie Redmayne) and Rennie Davis (Alex Sharp) represent Students for a Democratic Society (the SDS) and bring a more intellectual seriousness to their political involvement. Hayden clashes incessantly with the less serious, although intellectually bright, Abbie Hoffman (Sacha Baron Cohen) and Jerry Rubin (Jeremy Strong). Dressed as a hippie and mostly stoned, Abbie works evenings as a stand-up comic and talks wildly about staging a massive free-love celebration. He also mocks Hayden for having cut his hair for the trial in order to look more conventional.

Truly conventional is defendant David Dellinger (John Carroll Lynch), a family man and a conscientious objector. Two more defendants are thrown in with the group but their charges are minor. Defending this disparate group is seasoned and skilled attorney William Kunstler (Mark Rylance) and his assistant Leonard Weinglass (Ben Shenkman). However, the eighth defendant is major dissident Bobby Seale (Yahya Abdul-Mateen), co-founder of the Black Panthers, who is accused of another out-of-state crime and whose attorney is currently  hospitalized.

Presiding over the trial is Judge Julius Hoffman (Frank Langella), an experienced and elderly “old-school” judge, who finds that his traditional methods of keeping order in his courtroom do not necessarily hold up in this controversial and carefully observed trial. His enormous clash with Seale leads to a horrendous scene that would be shocking in any courtroom and results in Seale’s being excused from this trial as he awaits trial in another state.

There are lighter moments in “The Trial of the Chicago 7,” some of which are lifted from the actual court transcripts, such as an amusing tussle between Abbie and Judge Hoffman over the fact that they have the same last name. Another is the reaction of Chicago authorities when Abbie applies for a permit to allow a free-love celebration in Grant Park.  And there are some surprising moments toward the end of the film when a key witness is obtained by Kunstler and provides startling and unexpected testimony.

The Academy Awards are scheduled for April in 2021, but it would not be a surprise to see some of the actors in this film nominated for their performances. Mark Rylance with his head tilted and his steady gaze always upward portrays a very human and sympathetic defense attorney, alert to every nuance and agile in maneuvering the daily upsets. On the bench is the superb Langella, portraying a judge from another era who is struggling to keep traditional decorum in a courtroom that is totally out of touch with the world outside where ideas and events are erupting in another direction.

“The Trial of the Chicago 7” is streaming on Netflix.