Nearly 60,000 cases of COVID-19 are known to have occurred in Orange County to date. 1,475 people have died as a result of contracting the virus.

247 residents 18 and under have contracted the virus in the City’s four ZIP codes, an increase of 31 from two weeks ago. 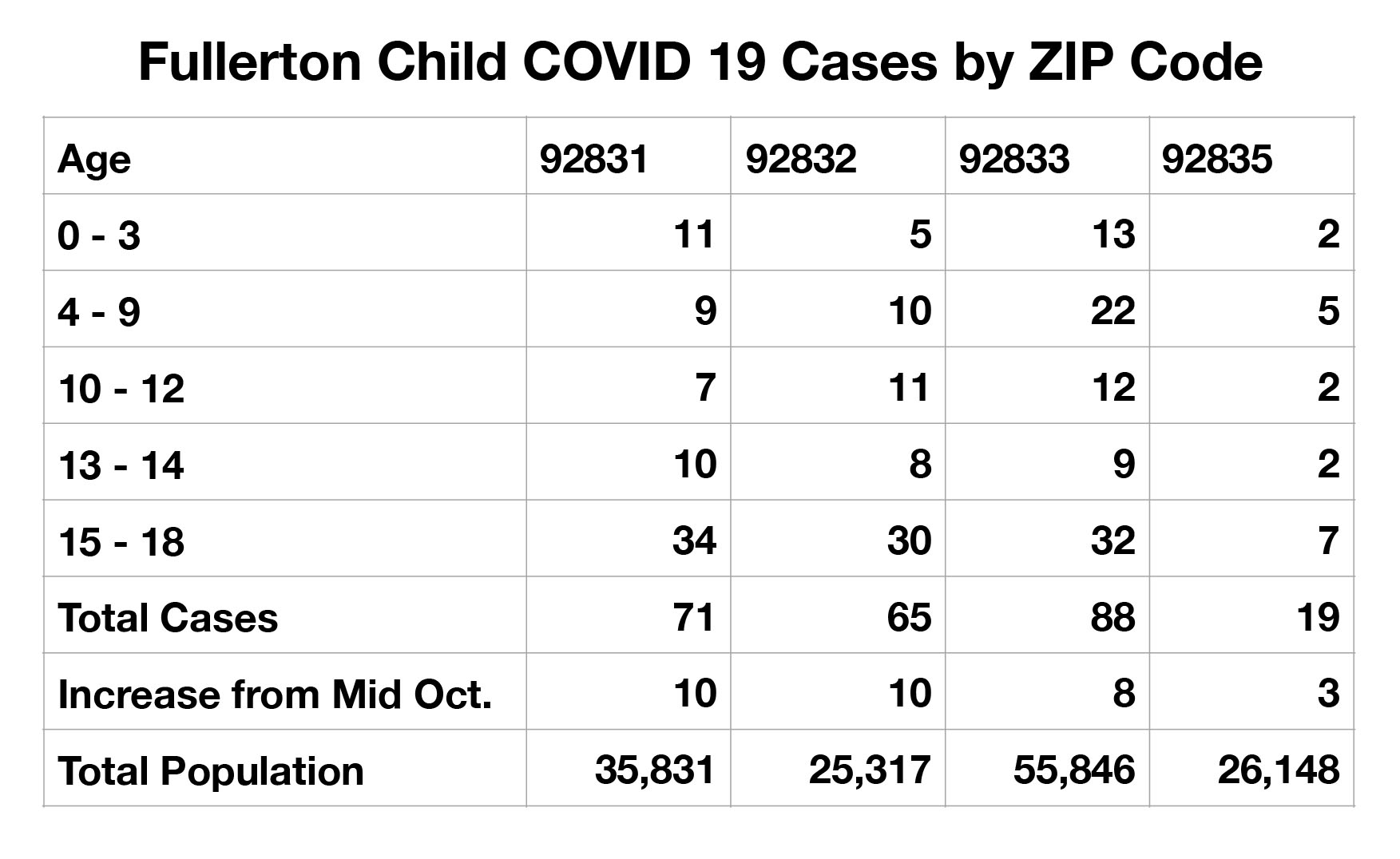 Recent countywide rises in cases of COVID-19 have dashed hopes of local officials that OC would move to the Orange, or third most restrictive tier in the State’s color-coded Blueprint for a Safer Economy.

The State standards allow counties to progressively reopen different sectors of their economies as they ascend from the Purple Tier (“Widespread”), to Red Tier (“Substantial”), to Orange Tier (“Moderate”), and, finally, to the Yellow Tier (“Minimal”).

Most Southern California counties are listed either as Purple or Red, while six counties in the Bay Area are Orange, and some of the more rural counties in the eastern and northern parts of the state are classified as either Orange or Yellow.

County officials continue to walk a fine rhetorical line of claiming credit for anticipating the State’s Health Equity Metric with local efforts to bring down positivity rates in the worst hit areas of the County, while simultaneously expressing frustration with the State’s methods for evaluation of how and when businesses can reopen.

Board of Supervisors Chair Michelle Steel has complained about Sacramento’s “top down one-size-fits-all approach for all 58 counties,” arguing that issues affect each county differently. County CEO Frank Kim suggested that the California Department of Public Health should take into consideration a county healthcare infrastructure’s capacity to treat COVID-19 patients as part of the metric for determining when it may reopen facilities. He responded to a question by the Observer about his comments by sending the following response: “It’s important for CDPH to consider multiple metrics to determine the status of safely re-opening counties across the State. I believe it is prudent for the State to consider utilizing a county’s healthcare system, and more importantly its current ICU rate, to better determine each county’s ability to safely re-open more sectors of its local economy.”

In recent weeks, OC Health Care Agency Director/County Health Officer Dr. Clayton Chau has spoken extensively about how the gross disparity of infection and death rates between lower income areas and higher income areas, as well as the available capacities for treatment, are not unique to COVID-19 cases, but rather indicative of existing health disparities in the County.

Populations in western and central Anaheim and in Santa Ana, where residents are likely to be Latinx, have suffered disproportionately high rates of infection. Higher density living situations leave individuals less able to self-isolate, resulting in higher transmission rates.

Residents in these areas are also more likely to have frontline jobs where they cannot work from home, leaving them more vulnerable to workplace transmissions. Lack of adequate healthcare in poorer areas results in the sorts of pre-existing medical conditions that make a patient more likely to develop severe symptoms and possibly die from the disease.

“These issues existed way before the pandemic,” Dr. Chau during said at an October 29 press conference, before announcing that the County HCA would be hiring a new Director of Public Health Equity. Dr. Chau has also argued that a steady income is a necessary element of health equity, arguing that it should be brought into discussions about when it is safe to reopen parts of the economy.

The two Anaheim ZIP codes where case rates spiked well into double digits earlier in the year surround the Disneyland resort area. County health officials are eager to work with State government to get Disneyland open again and have toured the park to evaluate safety procedures there. Dr. Chau noted that Disneyland had even adopted some of his suggestions. However, responses to concerns voiced by reporters about enforcing responsible behavior of visitors to restaurants, hotels, and other businesses catering to tourists in the Disneyland Resort area were less than reassuring.

Board of Supervisors CARES Act Disbursements

On October 20, the Orange County Board of Supervisors passed three agenda items to provide funding for three different areas of pandemic-related assistance in the County:

Introduced by Supervisors Doug Chaffee (Fullerton) and Andrew Do, the Orange County COVID-19 Child Care Relief Program will provide recovery funds for eligible childcare centers negatively affected by the pandemic, “including a reduction in revenue, layoffs, or voluntary and involuntary forced closures.” Funding may be used for staff expenses, supplies, mortgage or rent, and environmental improvements. The application period is from October 30 – November 13.

Results of a study by Orange County HCA and the University of California, Irvine suggest that a much larger percentage of the County’s population has been exposed to COVID-19 than previously known. Partnering with Orange County HCA, UCI designed a study to test a representative sample of Orange County residents for coronavirus antibodies, which would be present in an individual’s blood if they had contracted the virus, even if they did not show any symptoms. Nearly 3,000 individuals participated in the study, which showed a much higher rate of exposure than had previously been understood. 11.5% of subjects in the study were found to have coronavirus antibodies in their systems. Prior estimates had set the figure closer to 2%.

UCI’s Program in Public Health conducted the study, which was funded by the OC Health Care Agency who also provided the testing sites. The study reinforced statistics that show Latinx and other communities of color are affected at higher rates both in contracting the virus and in suffering worse consequences from their illnesses. The study’s results suggest that far more people across the Country may have contracted COVID-19 without realizing it, and subsequently spread it to others, underscoring the need for the now standard precautions of wearing face coverings to keep from infecting others and practicing social distancing, whether or not individuals themselves have experienced symptoms. 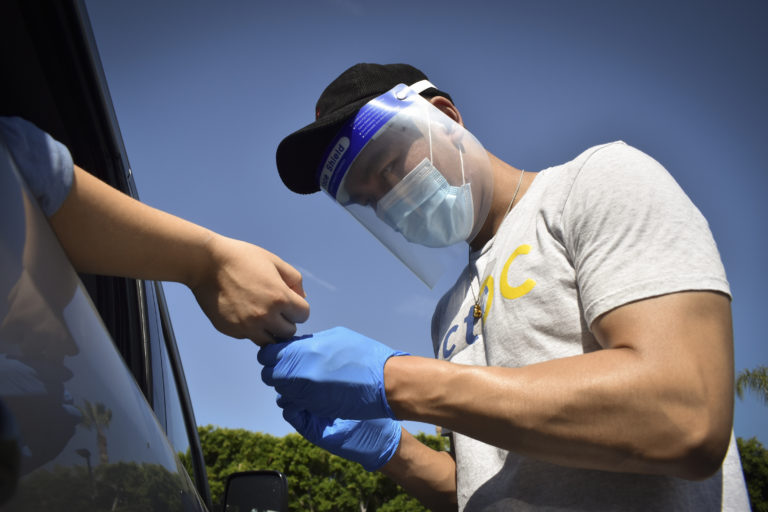 A medically-trained UCI volunteer collects a blood sample from an actOC study participant at one of 11 drive-thru antibody testing sites in Orange County. Carlos Puma for UCI Health.

It is unclear exactly what prompted Fullerton Mayor Jennifer Fitzgerald and longtime Santa Ana Mayor Miguel Pulido to pen an Oct. 30 letter to the Voice of OC news site in support of Dr. Chau, condemning “any and all attacks on his character or threats to intimidate him.” The letter, signed by an additional dozen mayors of OC cities, does not specify where any such efforts to intimidate Dr. Chau have occurred, although the Voice of OC did report that one of his degrees was earned through a discredited online school. His predecessor, Dr. Nichole Quick, resigned her position in May of this year after having been harassed and threatened by rowdy anti-mask residents during OC Board of Supervisors meetings, where she also endured a decided lack of support from most BOS members for her countywide mask order (rescinded by Dr. Chau upon his assumption of her duties). No editorial in support of Dr. Quick is known to have been written by Mayor Fitzgerald.