Recollections of the Wilshire Theater

Since so many theaters are closing because of the pandemic, I thought it would be interesting to write about one of Fullerton’s most beloved movie houses, the Wilshire Theater, which closed roughly thirty years ago. Many long-time Fullerton residents have memories of the Wilshire, a building that played a large role in the community even before it became a theater. 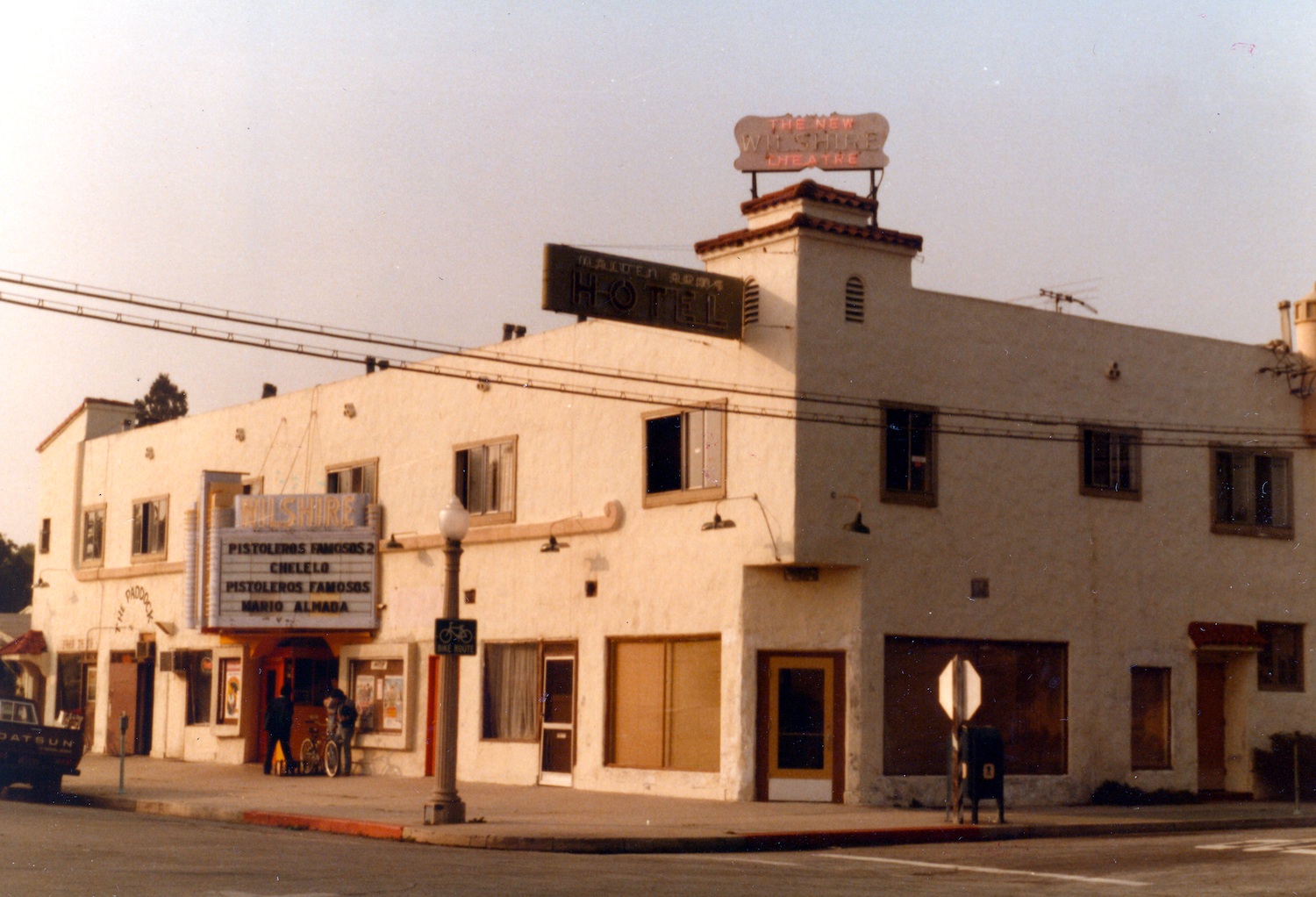 When researching the history of the Wilshire, I was referred to the website www.CinemaTreasures.org by Cheri Pape, Local History Archivist at the Fullerton Public Library. It was there I learned that the building that would become the Wilshire Theater was originally “erected on the site of an orange grove in 1927.” Originally built as a $50,000 apartment house at the corner of Wilshire and Malden avenues, it was constructed by Dr. H.H. Young. At the time, it was called the Malden Arms Hotel, and even included an indoor swimming pool and retail space.

According to CinemaTreasures, during the Depression era, the building served as a speakeasy. In 1946, a man named William L. Kaye converted the old swimming pool into the Wilshire Theater. Kaye even kept the diving boards behind the screen, where the deep end used to be. When the structure was transformed, the “spectator balcony on both sides of the pool remained in the theatre.”

Looking at scanned articles sent over from the Fullerton Public Library’s Local History Room archives, I discovered that in 1953, the Fullerton Daily News Tribune reported on “an eerie scene” at 205 W. Wilshire Avenue, where the theater was located. Apparently, there was an anonymous phone call reporting a suicide outside the building. Three police cars rushed to the Wilshire Theater to find a body hanging from a flagpole in front of the theater. It turned out to be the stuffed dummy of a man in work clothes advertising the current attraction, Hangman’s Knot. 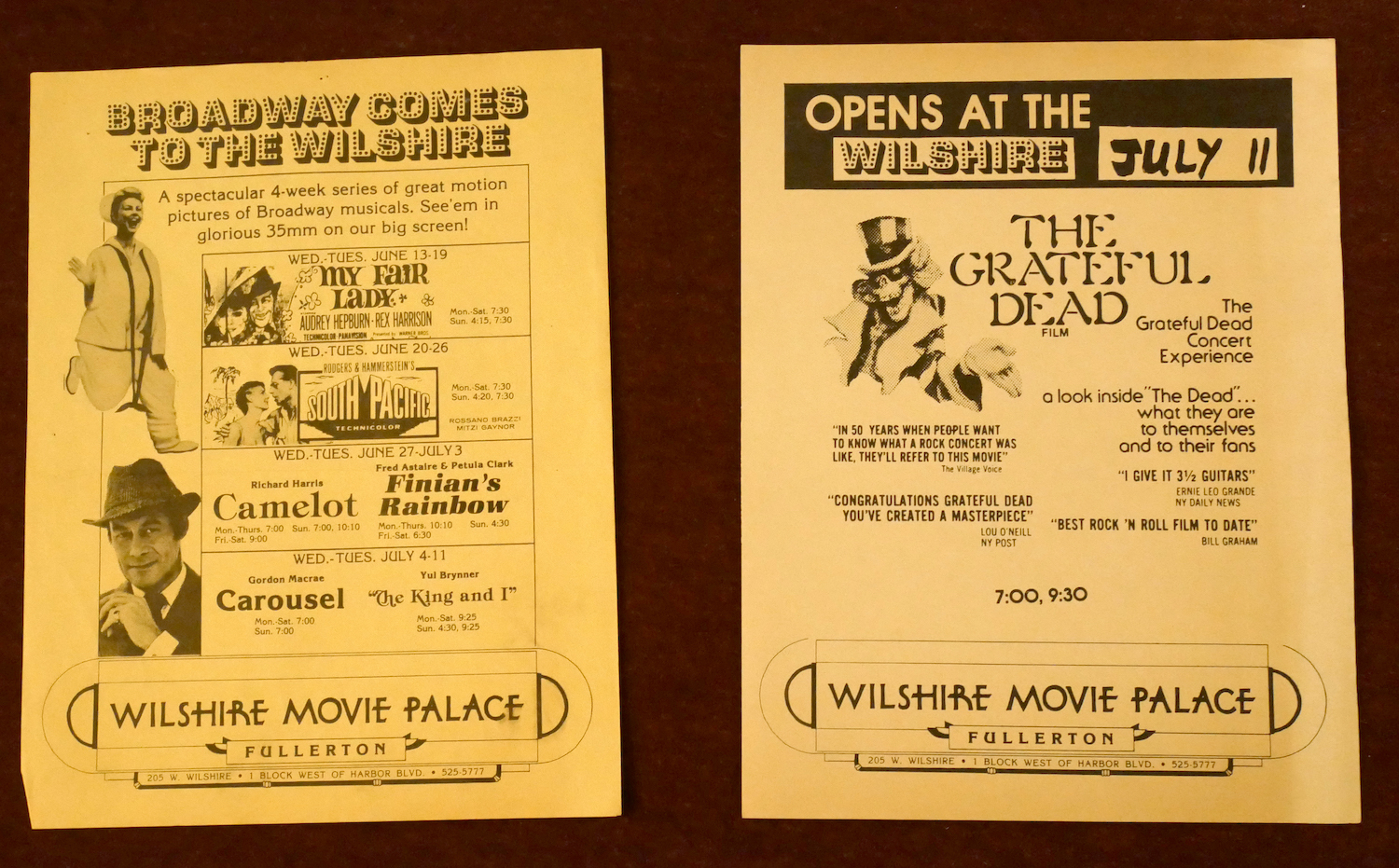 In the Seventies, the theater mostly screened independent, off-beat films as “an alternative to the Fox Theatre,” according to CinemaTreasures. The types of films shown included Hollywood classics, foreign language features, counter-culture films, and cult favorites. In fact, according to an article by Holly Bridges from the Fullerton Daily News Tribune, dated Feb. 20, 1979, “The Wilshire Theater is no longer a theater. It’s a Movie Palace.” It appears that ownership of the building had been passed to a man named Tom Cooper, who also owned the Tiffany and the Vagabond in Los Angeles. Admission to the Wilshire at the time was $2.50 for adults and $1.50 for children and senior citizens. Cooper was planning to start at those prices and gradually raise them in the coming months.

“I went to the Wilshire for the first time as a high school student in the 1970s,” bookseller and lifelong Fullerton resident Donald Cannon said via email. “My older brother and his friends brought me to a double feature screening of classic 1950s science fiction films, including Invasion of the Body Snatchers (1956) and The Day the Earth Stood Still (1951). The atmosphere was unlike anything I’d experienced before – bohemian, a bit rundown, and exciting. I remember the surprise of seeing depth markers on the walls, which I learned were legacies of the building’s former swimming pool. I returned many times in the ensuing years. We eagerly awaited each new schedule of upcoming fare. What a perk it was for Fullertonians having their own ‘art house’ revival cinema. The Wilshire played a great part in developing my love for film.” 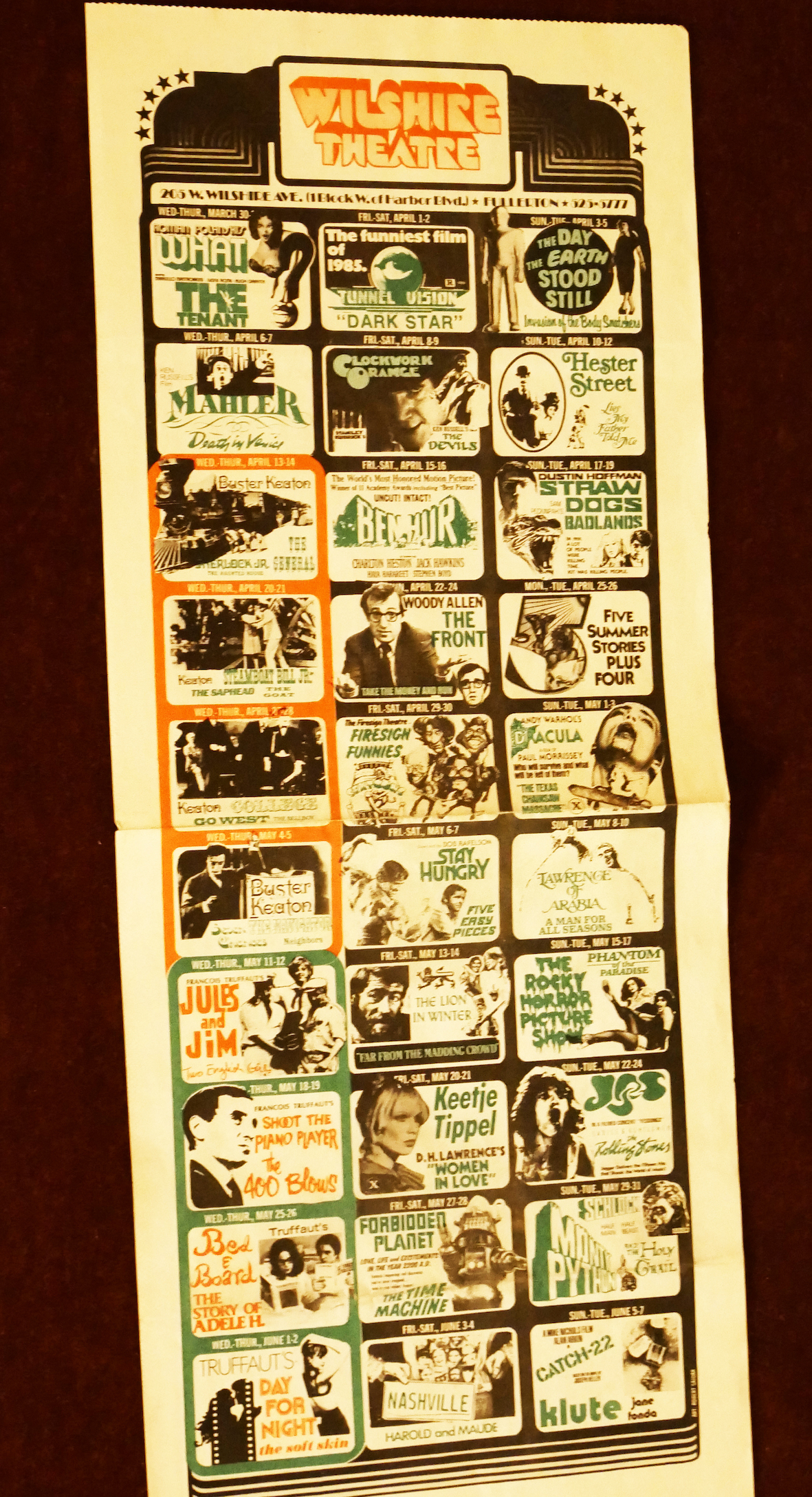 For many years, the Wilshire was one of the theaters that had midnight weekend screenings of films such as cult favorite, The Rocky Horror Picture Show. Audiences were encouraged to dress up and sing along. Most screenings were double features, which at the time were still the norm at many mainstream theaters.

After this, the theater changed yet again. According to Observer contributor and local activist, Jane Reifer, “during the era when the theater showed Mexican cinema, it was run by the Olivos family that owned the West Coast and Yost Theaters in downtown Santa Ana, where they showcased classic Mexican Cinema and staged famous celebrity appearances.” 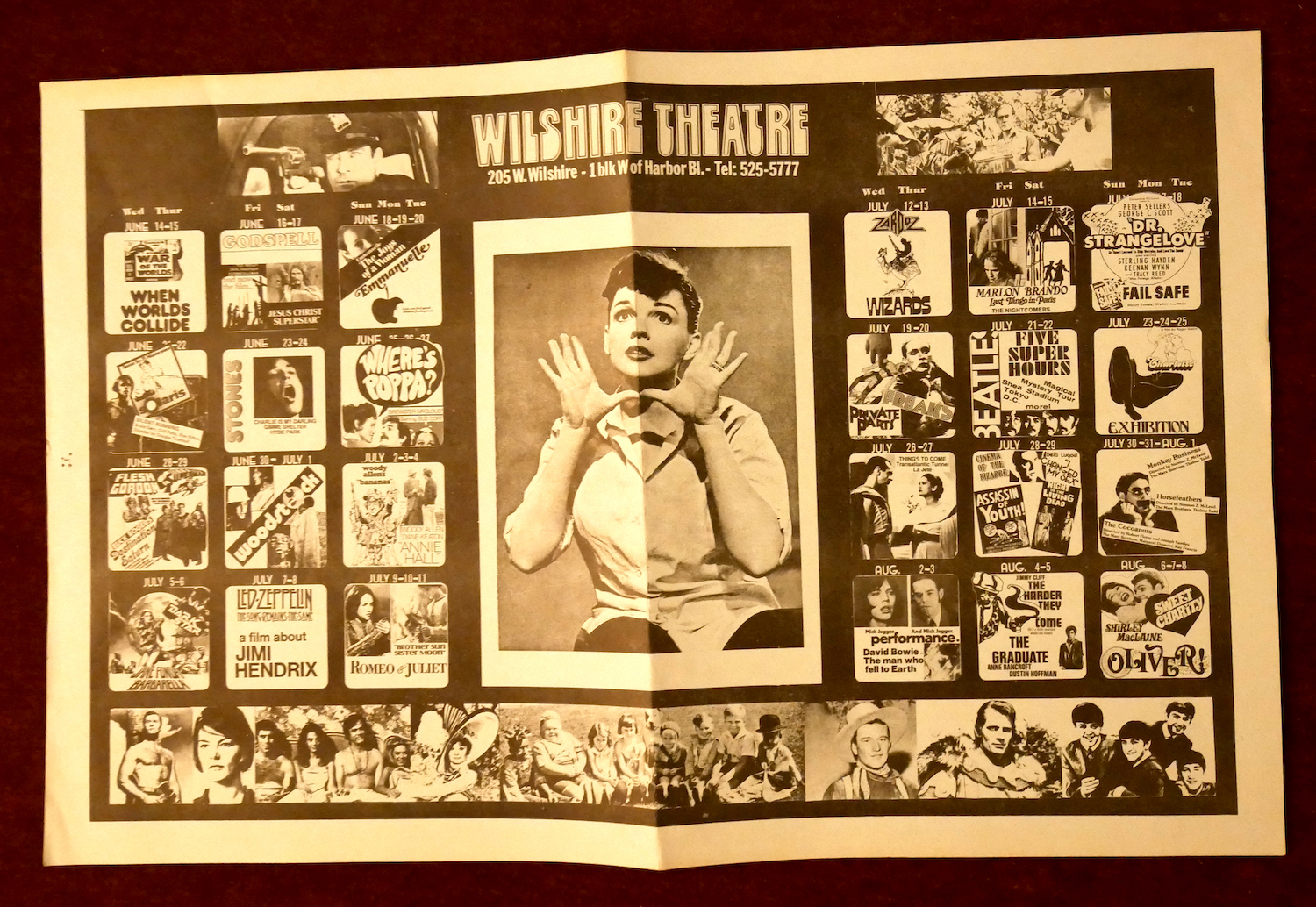 While I could not find a specific date, the Wilshire’s permanent closing most likely happened around the mid-1980s. The building was demolished in 1991 and apartments were built on the site in 1992. Jane Reifer said via email, “One last feature of the building that doesn’t get mentioned very often is the unusual undulating pattern that the exterior walls had. The walls would catch the light and change the shadow patterns as the day went by. Also, in its last days, the upper floor of the hotel became a roosting area for local bats.”

Reifer told me that the City of Fullerton allowed this theater to be torn down as a “remodel” rather than a “demolition” since several studs were left standing from the original structure. “Among other advantages, this allowed the new apartments to keep the grandfathered setback of the theater/hotel building instead of the more stringent setbacks that would have been required for new construction,” Reifer said. “The underground speakeasy wall with its mural was also kept and is still there, underneath the apartments. The massive wooden arched trusses that had stars painted on them were supposed to be saved, but I don’t think this happened. Homes were found for most of the furniture and theater seats, but the marquee was destroyed.”

Seeing the theater torn down must have been devastating for members of the Fullerton community. “Seeing this theater and affordable SRO hotel building torn down and considered a remodel was very upsetting,” Reifer said. “This was one of the reasons I’ve been involved in affordable housing and historic preservation work throughout Fullerton ever since. You could say that this theater’s demise is one of the reasons that the Fox Fullerton is still standing.”

To see old photographs of the theater, newspaper clippings, and movie listings from the Wilshire, please visit my Youtube channel HERE.