Mank: a Hit and a Miss

To reflect the era of films made in early 1940s Hollywood, “Mank” is shot in black and white. It features Academy Award winner Gary Oldman as Mank, nickname for Herman J. Mankiewicz, a transport from the east coast now writing screenplays in Hollywood.  Known for his intellect and prodigious talent, he is also a reckless gambler and heavy drinker.

Injured in an auto accident that has left him immobilized in a full-length leg cast, Mank is recovering on a guest ranch in Victorville tended by a physical therapist (Monika Gossmann) and a first-rate secretary  (Lily  Collins) to record the screenplay he is writing. Producer John Houseman (Sam Troughton) pressures Mank to finish the script that will star Orson Welles (Tom Burke).

Like the screenplay  Mank is writing, this movie, directed by David Fincher, moves back and forth in time, focusing earlier, in the 1930s, when Mank became acquainted with William Randolph Hearst (Charles Dance) and his paramour Marion Davies (a luminous Amanda Seyfried). This friendship entails visits to Hearst’s Castle, where some of Davies’ movies are filmed. 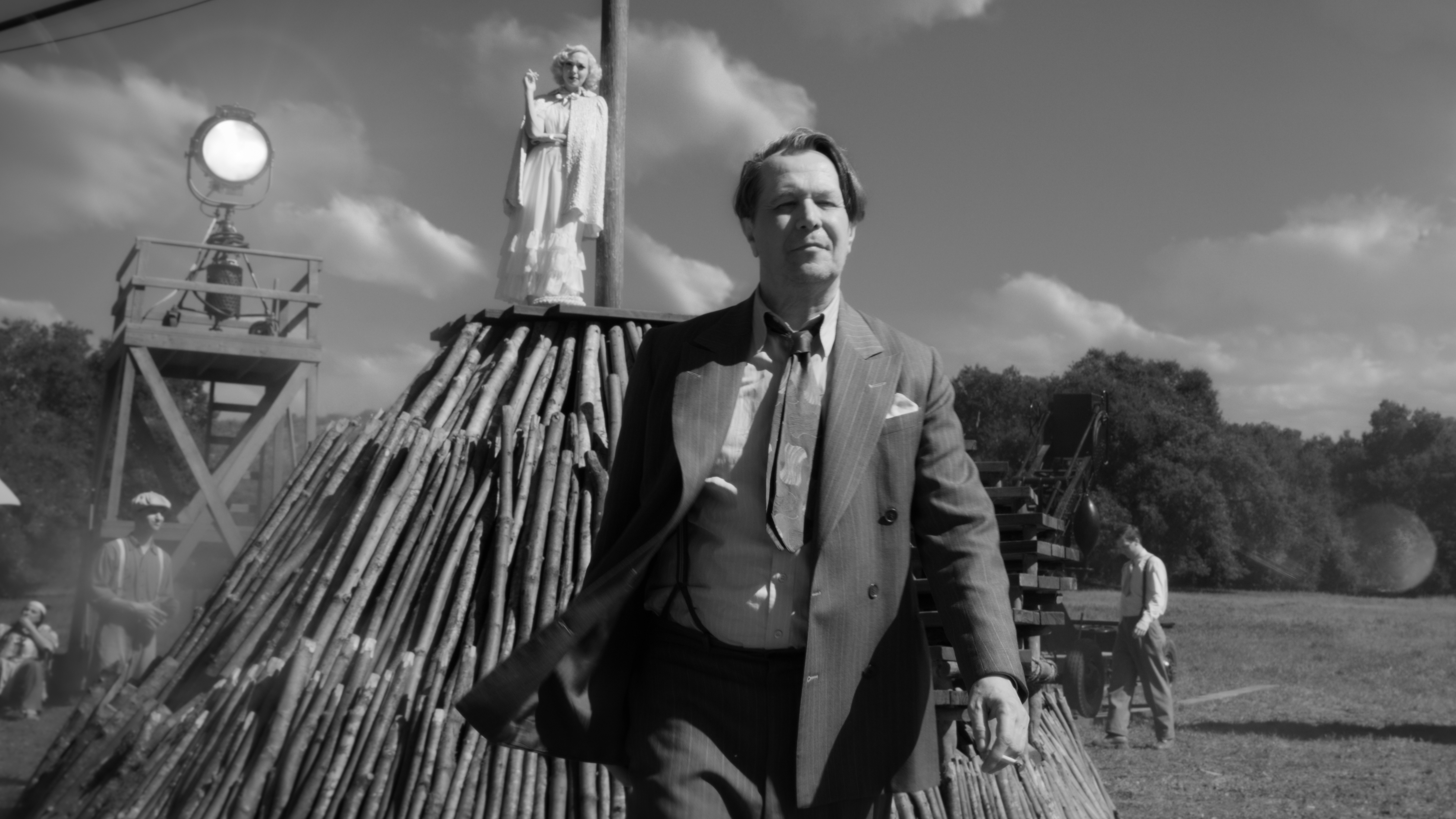 “Mank” also focuses on the California gubernatorial election of 1934 when Upton Sinclair was running for Governor. Sinclair is supported by Mankiewicz, a Liberal, but opposed by all the major movie moguls, such as Louis B. Mayer and Irving Thalberg, who saw Sinclair as a threat to capitalism. As a result, Republican Frank Merriam won that election.

Although Mank is doubting the worth of the screenplay he is writing, Houseman comes to the desert to read it and declares the script the best work Mank has ever done. With some editing for length, this script turns out to be the movie “Citizen Kane,” which won the Academy Award for best screenplay in 1942.

Although the acting is solid throughout the film, “Mank” is not a movie for all audiences. It suffers somewhat from a reliance on the mystique surrounding the making and filming of “Citizen Kane” as well as the talents of Orson Welles, and its allusions to Hearst.  One wonders about the relevance of these issues in twenty-first century America. Also, lines that are supposed to be witty may not be found amusing to contemporary audiences.

“Mank” can be seen on Netflix.

Although taking place one century earlier than “Mank,” “Ammonite” has themes about empowerment for women in the sciences that are more relevant today than they were in the 1840s. In England during the nineteenth century, a burgeoning interest in natural science manifested itself through the hobbies and pursuits of both university-educated and self-educated lay persons . Living in Dorset,  where the beaches are covered with loose shale stones, historically accurate Mary Anning (Kate Winslet) pursued a passion for finding fossilized prehistoric creatures embedded in these stones.

We first meet Mary tugging on a boulder that crashes below her revealing the coiled, chambered spiral of a Jurassic Age ammonite. As a self-taught paleontologist, Mary knows the scientific value of such a find. She and her mother sell her unearthed fossils in a small shop in Lyme Regis. (Some of her found fossils still reside in the British Museum.)  In the 1840s, paleontology was a popular hobby within the leisure class and Mary’s shop became a destination for gentlemen without the time or inclination to do their own digging. But Mary and her mother (Gemma Jones) struggle to live on the modest income from her fossil sales. 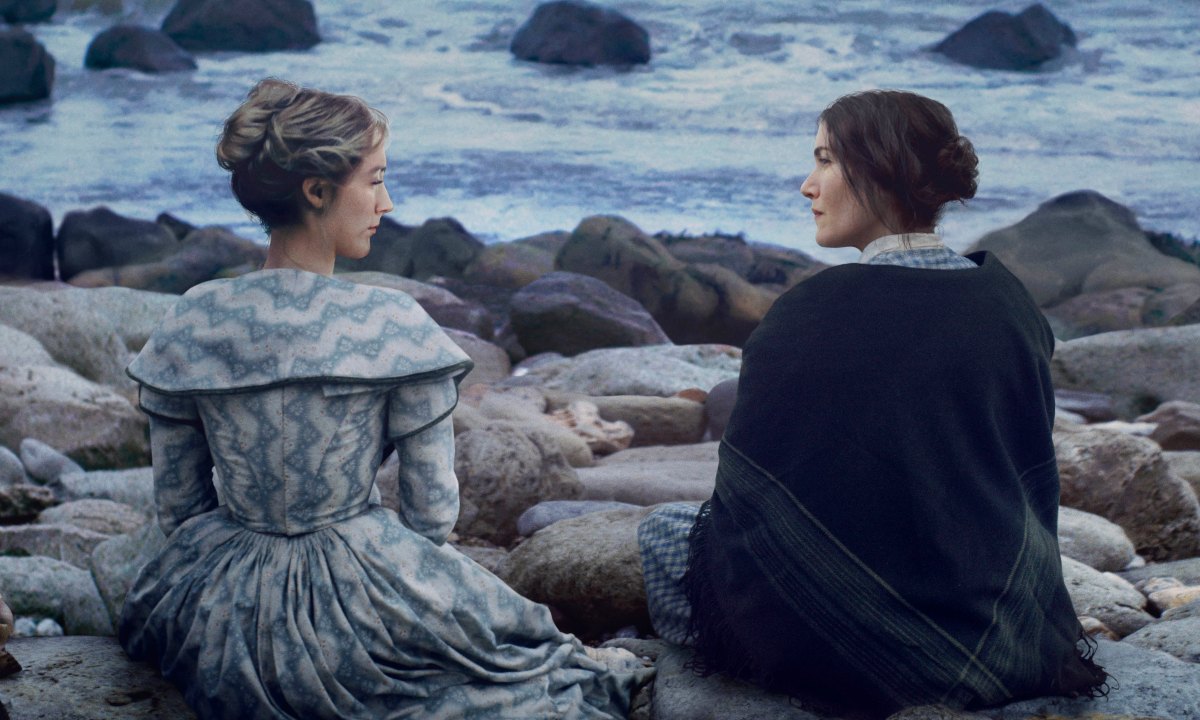 A gentleman arrives with his young wife, Charlotte (Saoirse Ronan), to visit Mary’s shop before heading off on a six-week paleontological tour of the continent.  Charlotte, recovering from a recent miscarriage, is physically weak and emotionally saddened, so her husband asks Mary if he can leave Charlotte with her so that the brisk sea air will strengthen and revive his ailing wife.  Not eager to be troubled with the care of a house guest, Mary agrees only after he offers her a generous sum of money.

Both writer and director Francis Lee uses the outlines of this story but through his own imagination, he creates between these two women an antipathy that eventually evolves into admiration and, ultimately, carnal desire. However, “Ammonite” would not have worked as an engaging movie if it weren’t for Winslet’s and Ronan’s acting skills. Their subtle glances and small gestures convey meaning and emotion even with little dialogue.

“Ammonite” can be seen through Video on Demand.