The Orange County Healthcare Agency’s first COVID-19 mass vaccination site began administering vaccines Wednesday January 13 in the parking lot of Disneyland in Anaheim. The site is the first of five so-called SuperPOD (for Super Point-of-Dispensing) planned to open in different regions throughout the County. During a press event that day OC Board of Supervisor Chair Andrew Do thanked Disney for not only providing the site, but also for staffing, supplies, and logistical support. He described the site as a template for future ones not only in the County, but elsewhere where other municipalities are trying to organize vaccinations for their local populations. 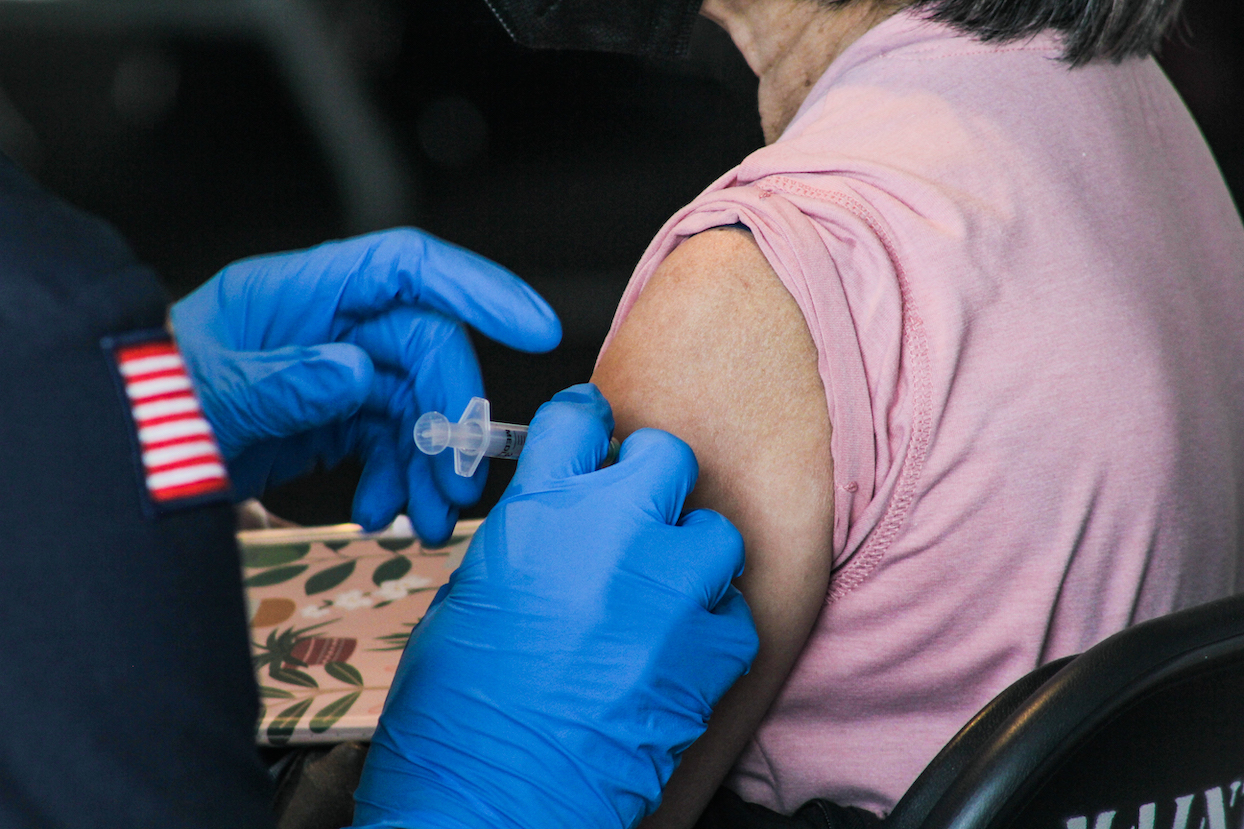 An Orange County resident receives a COVID-19 vaccination at Disneyland on January 13. Photo courtesy of County of Orange.

The Anaheim vaccination site is by appointment only to avoid large gatherings of people who might spread the virus while waiting for a vaccine. OC residents who would like to be vaccinated (which currently includes those 65 and older, health care workers, and some front line workers) are directed to visit covidvaccinefacts.com for more details. Appointments are made through the County’s new online site and app Othena.com, which was reportedly used to sign up 10,000 people for appointments in the first two hours of its operation. Fourth District Supervisor Doug Chaffee, whose district includes both Fullerton and Anaheim, explained during the Wednesday press conference that the app’s name derived from Athena, the Greek goddess of wisdom, and the letter “O” for Orange (County).

The Othena app is also meant to help the HCA to track infection rates within ZIP codes to measure the effectiveness of vaccines in specific communities. The statistics will help Health Care Agency to target information to neighborhoods who might not know about the vaccinations or how to receive them. Two ZIP codes in Anaheim, including one that contains Disneyland, have some of the highest numbers of COVID-19 infections and deaths in the County, which has alarmed health officials who fear that non-English speaking residents, and/or those working frontline jobs and living in dense residential conditions might not know about the opportunity to be vaccinated.

“Vaccine hesitancy” is also an issue within these communities, as well as elsewhere throughout the County, but Dr. Clayton Chau, OCHCA Director and County Health Officer, believes that targeting neighborhoods with the highest infection and death rates will significantly help to relive the strain on hospitals overwhelmed by the pandemic. Board Chair Do supports the strategy, saying that the County cannot possibly vaccinate everyone with their current allotment of vaccines, and should concentrate on those most at risk, citing a 220% higher mortality rate in disadvantaged communities, because their numbers ultimately impact everyone.

Officials did not address the seeming contradiction between relying on a web or app-based system to scheduled vaccinations for aging and/or disadvantaged communities who could be assumed to be least likely to have Internet access or use smart phones or tablets.

The state of California recently released a tiered plan prioritizing groups of residents by occupation and age to determine who will first receive the vaccine. Following the vaccinations of Phase 1A healthcare workers and long term care facility residents, Phase1B includes anyone over the age of 75, but that age range has been lowered to 65 years and older. Dr. Chau recommended the age relaxation because those aged 65 and older are the most at risk for serious hospitalization and death.

The County’s goal is to vaccinate 7,500 to 8,000 people per day per POD site, which adds up to 40,000 doses per day overall. The state of California has allocated 170,000 doses to OC, enough for half that number of residents. Not all doses have yet arrived, but at least 42,000 had just been delivered this week (Jan 11-15), and another 35,000 are expected next week. The Othena app and website are intended to demonstrate that the County has the capacity to deliver vaccines in a timely and organized fashion. Board Chair Do emphasized that 80% of all vaccines provided by the State are sent directly to health care providers. Residents are advised to first contact their primary care physicians to arrange vaccinations before using the County’s app and website.

Chaffee, who has served for two months with Chair Do on a Board committee to oversee vaccine distribution, acknowledged technical problems with the Othena site, which remained unavailable to some users that very day. “We’re working on that,” Chaffee said. The site appears to have since been revamped. The website instructs users to first create an account before using the app. 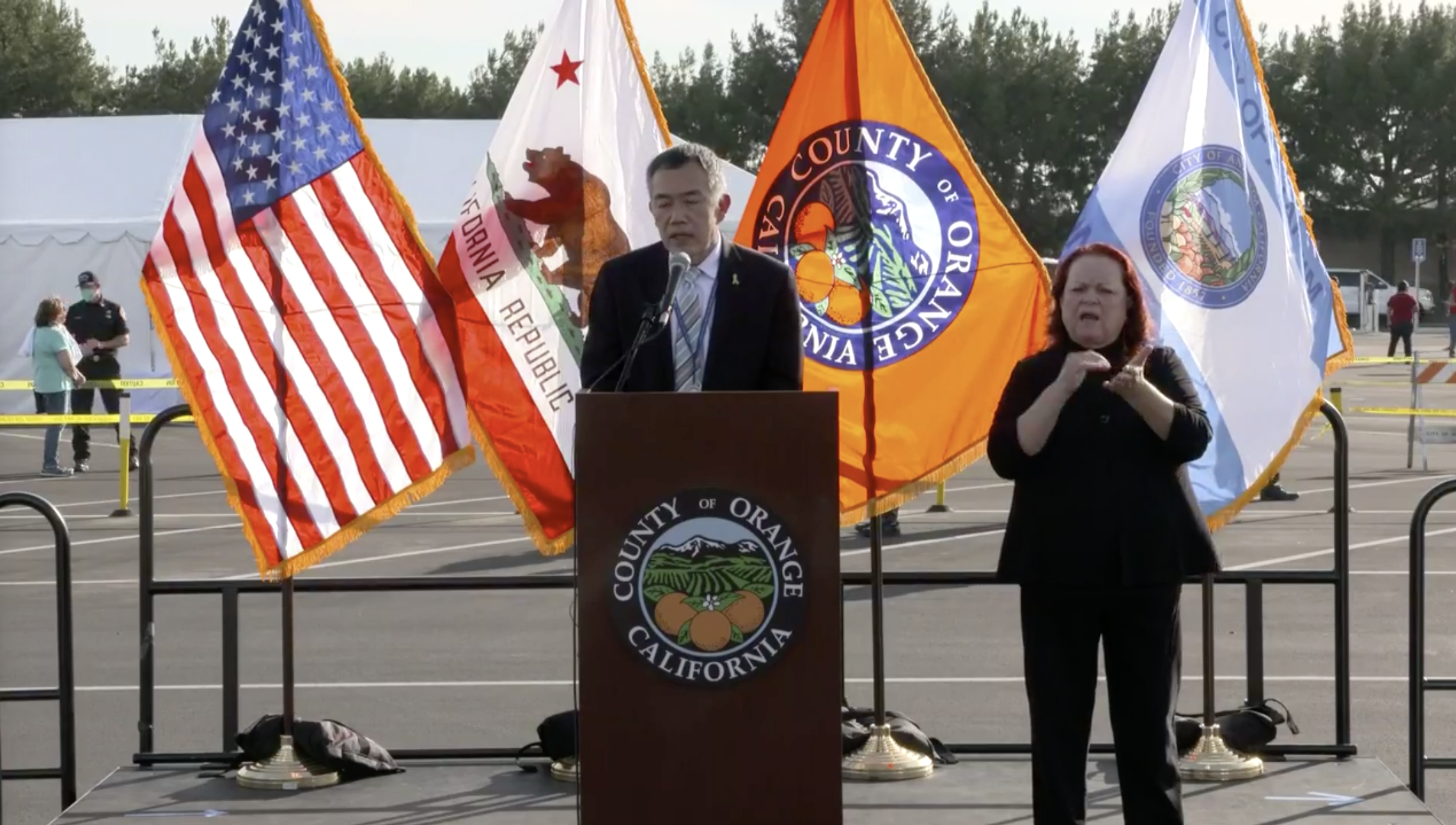 Chaffee said he’d like the operational state of the Disneyland site to “send a message to President-Elect Joe Biden,” and invite Biden to visit the County’s Incident Management Team “Brain Center,” which Chaffee said he sees as a model for the rest of the country. Biden’s stated goal is to administer 100 million doses in the first 100 days of his administration. Chaffee said that allocating 4 million doses to allow the County to vaccinate 2 million residents (the current vaccines are most effective with two doses per person) would help Biden’s administration to reach that goal.

The Orange County Healthcare Agency is partnering with the Orange County Fire Authority to distribute the vaccine through it’s “Operation Independence,” named because OC plans to complete its vaccination program by July 4 of this year. The Incident Management Team in charge of the effort is directed by OC Fire Authority Division Chief Mike Petro and OCHCA’s Dr. Margaret Bredehoft, both of whom were present Wednesday for the site launch.

Supervisor Don Wagner called Disney “a great corporate friend” and thanked the company for “picking up the slack” in the State’s vaccination rollout, which he called “a bit disappointing.” Anaheim Mayor Harry Sidhu, who enjoys the political support of Disney, noted that it had been 10 months since Disneyland, Anaheim Stadium, and the Anaheim Convention Center had closed. “Walt is looking from there,” Sidhu said, presumably referring to Walt Disney. Orange County elected officials and State representatives have strongly advocated reopening Disneyland and other amusement parks despite the record high numbers of COVID-19 infections and deaths.

The POD sites are designed to scale up as more doses of the vaccines become available. Officials will not reveal the proposed locations of additional sites saying that they will be brought online as additional vaccine doses become available. Dr. Chau said that “The end of COVID-19 is in sight” Wednesday, urging OC residents to continue to get tested and to practice preventive measures like hand-washing, mask-wearing, and social-distancing.