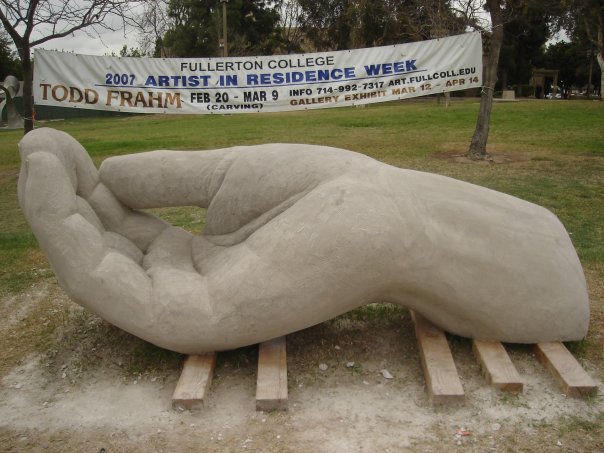 We received so many responses and interesting information regarding the photo question in the January issue, we decided to wait until now so we had enough room to get a good amount of it to you, and so we could dedicate the space in our last issue to our Tommy Lasorda tribute.

First of all, the answer to the question regarding the location of the sculpture was a bit puzzling to a number of readers because of the “Fallen David” sculpture at Cal State Fullerton. Apparently, that sculpture toppled during the Whittier Narrows earthquake in October of 1987 and was later donated by Forest Lawn to be displayed in pieces. 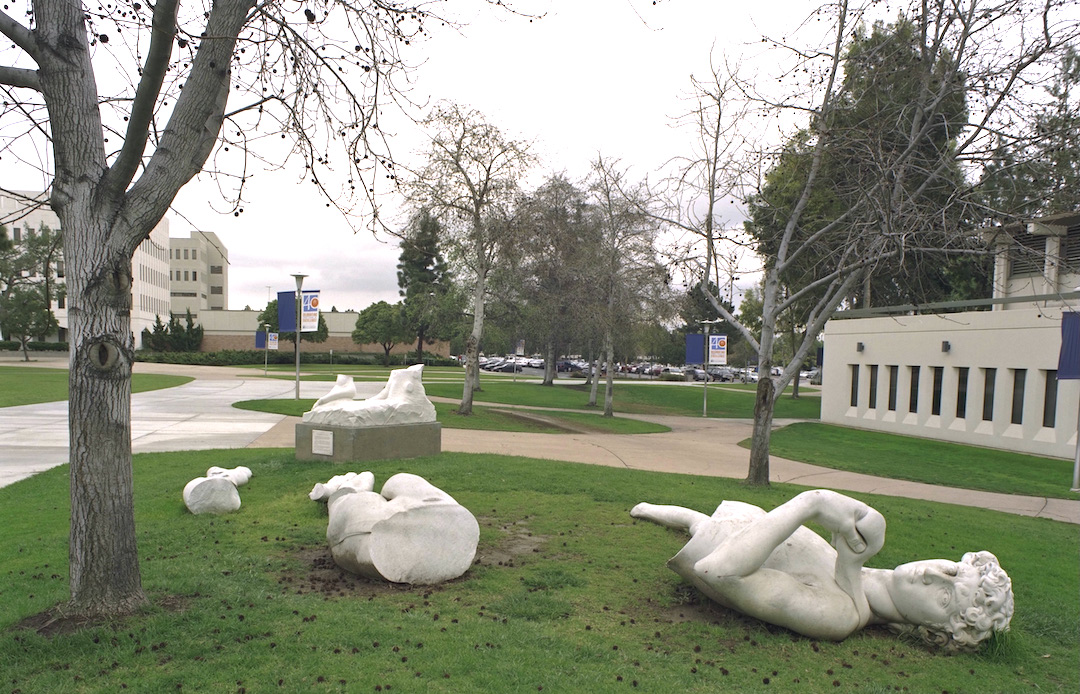 The correct answer is the Sculpture Garden at Fullerton College on the southeast corner of Lemon and Chapman, and reader Mariela Robles was first to give us that answer. Bob Jensen, who was Dean of Fine Arts at Fullerton College at the time, commissioned artist Todd Frahm to create the sculpture. Todd was Artist in Residence in 2007.  It was challenging right away, as Todd had to locate the right block of stone during winter. Fortunately, a quarry in Indiana had a remnant from an earlier cutting, so there was no fear of water freezing within the stone and compromising the stone’s integrity. 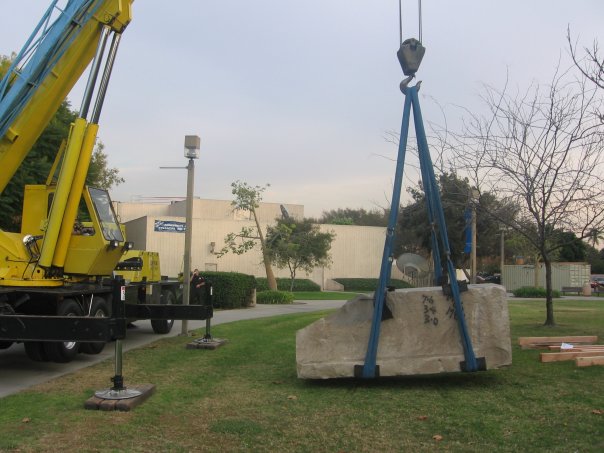 The block that would become the hand sculpture at Fullerton College.

The block had been rejected for the Pentagon repair project after 9/11 because of a slight imperfection in its color, which can be seen in the straight edge of the finished piece.  The 19,000 pound block was delivered by flatbed truck and lowered into place by a large crane. It took over a month to sculpt the piece, with students and many guests watching the progress. I’m sure many driving by were taken in by the sight as they are to this day, including myself. This sculpture and the entire garden are yet another piece in the puzzle that makes Fullerton the place to be. 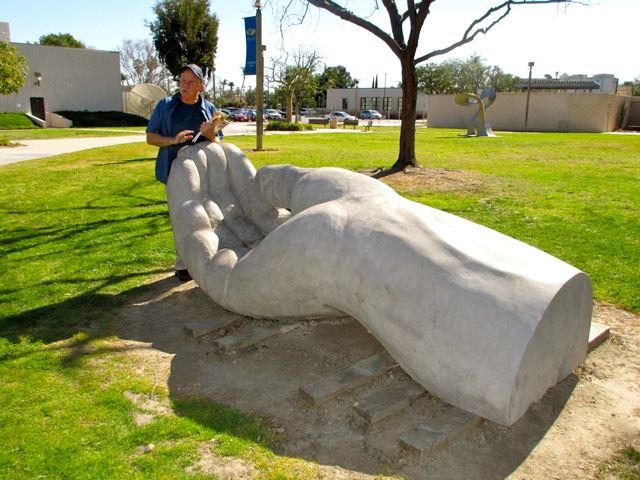 Robert Jensen with the hand sculpture.

6:22am, a text message. What, a text this early? The way things have been going for so long, any early morning text may not be great news, so this seemed a bit ominous. Hooray, it was actually a tip that suddenly a walk-up COVID-19 vaccination line was forming at St. Jude. My friend got there at 6am and he was the third car in the parking lot. Definitely worth checking out. When I got there, I saw him in line.  Just before 9am, when people were being welcomed inside for their vaccinations, a couple of cretins cut in line, right in front of him. I guess they were called by the person who let them cut in. They were somehow entitled. Or so they thought.

Suddenly, a person of authority came out and made an announcement. Anyone who was not at least 65 would not be getting a vaccine. Did not matter who they knew, if they were 64 and a half. Whatever excuse, there would be no exceptions. The line-cutters slithered away and since there were only 100 vaccinations available, numbers 99 and 100 at the end of the line who had gotten there early would not be sent home without a vaccine, after all. A great day, and a well-deserved walk of shame.  Stay tuned for more good news coming your way now….

The next day, 150 vaccines became available, and my hopeful in-laws got there very early. They were given an appointment for later in the day so no waiting out in the cold and rain for them. Everyone was welcoming and those in line were thanked for their patience. Trust me, everyone felt lucky to be there. The only concern was impending rain. The gratitude everyone expressed towards those who were working there, paid professionals and volunteers alike, was best summed up by Gordon, who received his vaccine along with his wife Lorra. “All I can say is thanks to all concerned for the exceptional way everybody took care of us,” he said. Optimism may be a rare commodity these days, but it can be found. And it was.

Note: The Observer cannot confirm that vaccines are currently being distributed in the way described above. To learn about vaccine distribution in Orange County, including who is eligible to be vaccinated at this time visit: covidvaccinefacts.com.

Yes, another snow photo, you recognize Mt. Baldy, but exactly where was this photo taken from? Send your answer to Mike at AllMedia@sbcglobal.net. 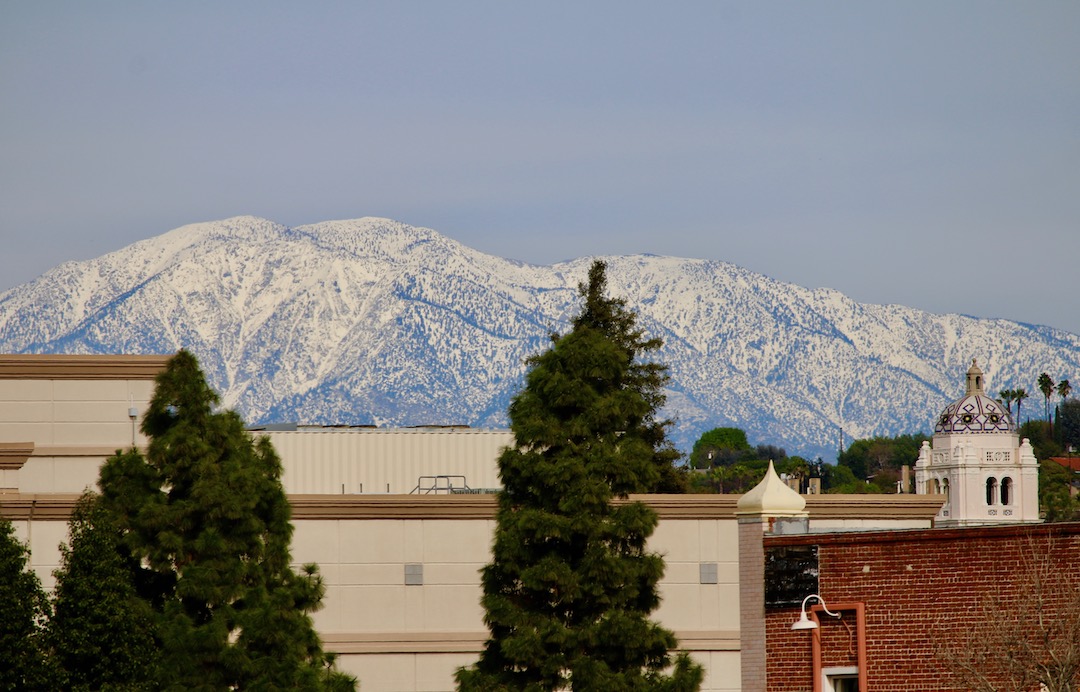