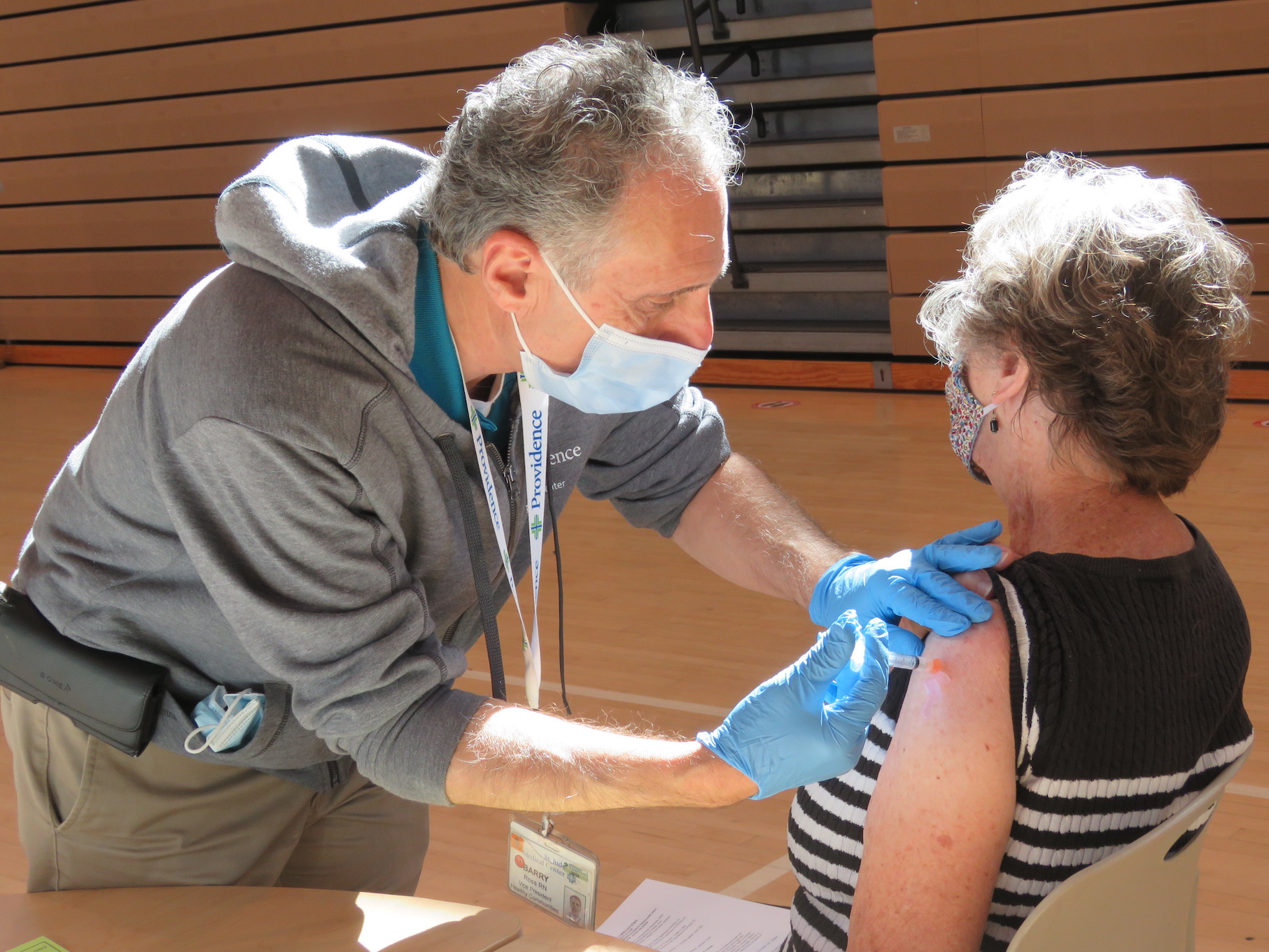 The City declined to provide details about the clinic in advance citing the limited supply of vaccines. They only issued a press release about it the following day, although two City employees did speak with The Observer during a break in activity during the event itself. According to the press release, “The one-day clinic was put forward in a collaborative effort to provide vaccine accessibility to some of the community’s most vulnerable and hard to reach seniors.”

According to Community Center Director Cori Lantz, City Parks and Rec. staff took the first 400 reservations after calling people from the 1,300 member Fullerton Seniors Club, some of whom volunteered to assist with the clinic. It was a “first come first served” arrangement because of the limited number of vaccines made available, but the focus of the clinic was to reach those without Internet access or reliable transportation. 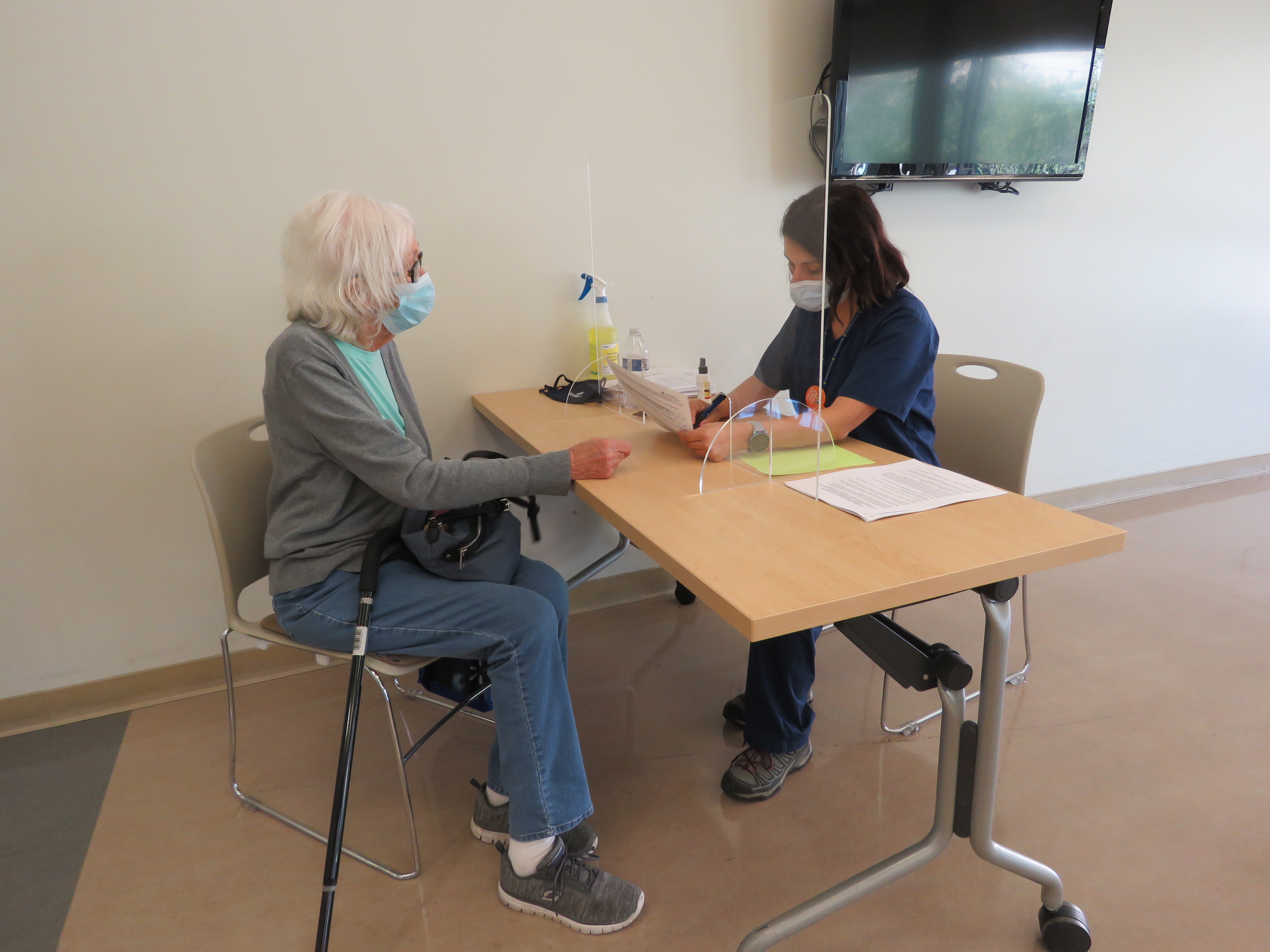 A resident checks in to receive her vaccine.

The clinic scheduled individuals in groups of 30 every 30 minutes from 8:00 a.m. to 4:00 p.m. A Fullerton Police Department officer stood before his squad car in the middle of the lane leading into the Community Center parking lot from Commonwealth Ave. Individuals with reservations were allowed to proceed, while those without were turned away. Those with appointments were checked in outside the Center’s main entrance then sent inside to fill out paperwork in classrooms before advancing to the gymnasium where they received their vaccine shots. They then had to wait fifteen minutes before leaving so medical staff could observe them for possible adverse reactions. Halfway through the day Friday no such reactions had been observed. Those with the most severe mobility issues were allowed to receive the vaccine in the parking lot area.

Each of the 400 seniors were scheduled for a second vaccine appointment in a month in accordance with Moderna’s two-shot requirement for its vaccine. The City is maintaining a wait list of individuals who would like the vaccine but couldn’t get an appointment for one on Feb. 19. Community Center Director Lantz was not sure when another such clinic would be scheduled for those who didn’t get an appointment that day, although they hope for another one if St. Jude is able to secure an adequate amount of vaccine doses. 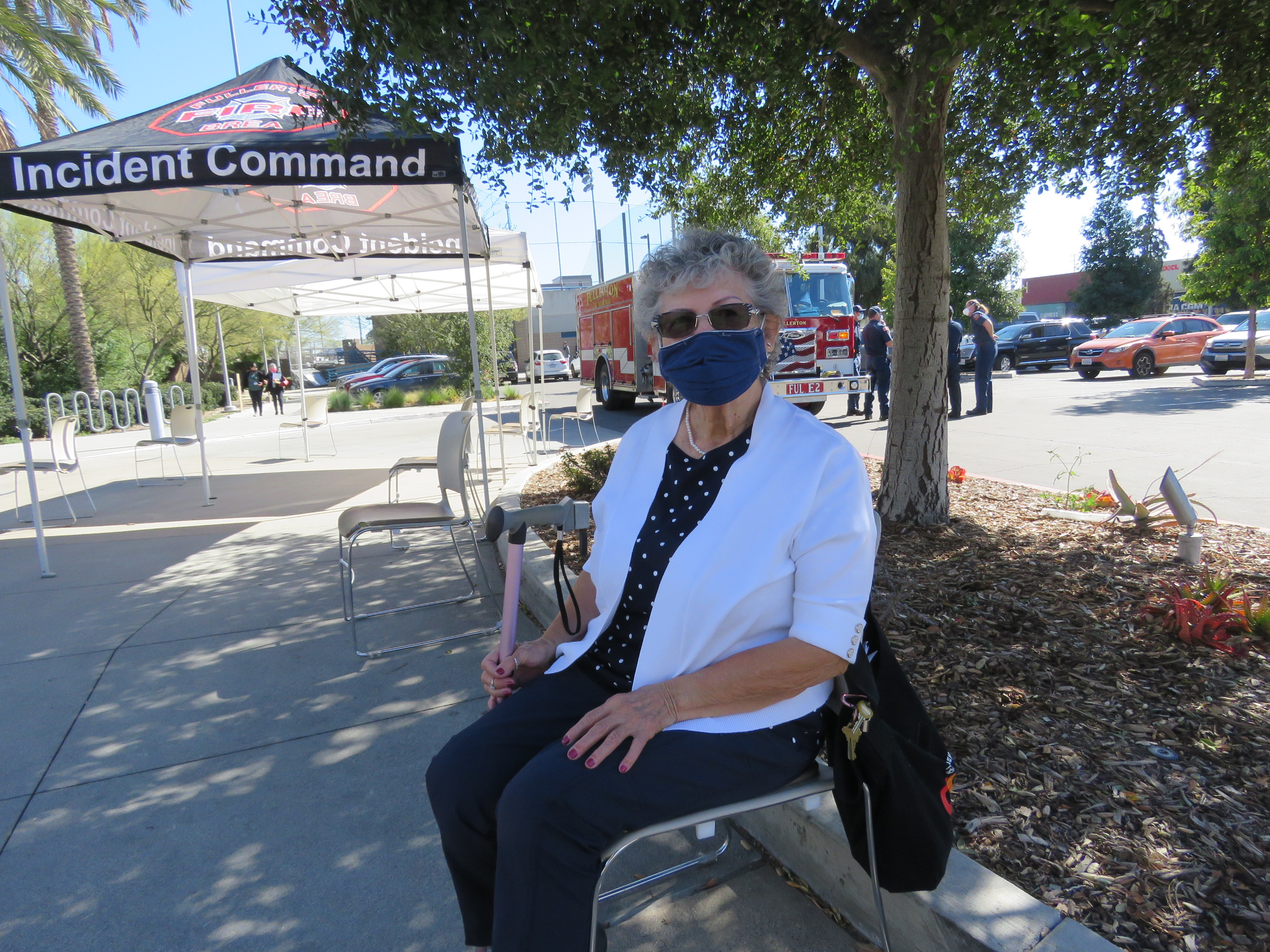 A resident waits outside the Community Center to receive her vaccine.

Members of the Fullerton Fire Department were also on hand to assist with any other medical emergencies. Kristi Batiste, who recently joined the City as Emergency Services Director, said that no such medical events had yet occurred.

The City continues to operate services for seniors during the pandemic, including Meals on Wheels and the City’s Senior Mobility Program for those who don’t drive. The mobility program is funded by Measure M2 funds through the Orange County Transit District. Yellow Cabs were used to transport some seniors to and from the Community Center for their vaccines Friday.

Othena, the Orange County-commissioned smart device app and website, was not employed for Fullerton’s clinic reservations. The County’s Health Care Agency has been criticized for relying on online registration to reserve appointments for a vaccine that is, thus far, restricted largely to people aged 65 and older, many of whom do not use computers or other digital devices. The County Health Care Agency was not involved in the February 19 clinic in Fullerton, but the HCA has developed a similar model of one-day pop-up clinics away from its larger SuperPOD sites, relying on non-profits and community organizations to contact people who might not otherwise know about vaccination opportunities or be able to otherwise arrange an appointment themselves.