The county of Orange announced on Friday, March 12 that effective March 14 OC would move into the Red or “Substantial” Tier of California’s Blueprint for a Safer Economy (covid19.ca.gov/safer-economy). The four-tiered Blueprint was adopted last year to determine how much of their respective economies and public activities individual counties could open, based on several health metrics. Just weeks ago, nearly all of the State’s counties were mired deep in the Purple or “Widespread” Tier, the most restrictive, limiting gatherings to outdoors only, and only small ones at that, and forbidding movie theaters, museums, zoos, aquariums, and gyms from opening indoors at all. Moving to the Red Tier allows those entities to open indoors, with modifications of a maximum of 25% capacity. Retail businesses may expand capacity to 50%.

Private indoor gatherings are still strongly discouraged but allowed with modifications and a maximum of 3 households at one time. Indoor gatherings are a major source of coronavirus transmission. Ill-advised gatherings during the holiday season last year helped to cause COVID-19 cases and deaths to skyrocket for weeks, resulting in a statewide stay-at-home order that was lifted only in late January. California’s mask-wearing mandate is still in effect, unchanged by counties ascending from tier to tier in the framework.

The adoption of a state bill authored and championed by Assembly member Sharon Quirk-Silva will allow amusement parks to open in the Red Tier instead of waiting until counties move up into the Orange, or “Moderate Tier,” but not until April 1. Amusement parks may operate at a maximum of 15% capacity for groups of 10 people or less or no more than 3 household groups. No indoor dining will be allowed at the parks. Tickets must be purchased online and only in-state visitors may enter the parks. Workers must be tested each week. Disneyland, located in Quirk-Silva’s Assembly district, has already begun calling back furloughed workers, although no reopening date has yet been announced.”

Additionally, breweries, wineries, and distilleries that do not serve meals will be allowed to open with modifications, including requiring patrons to have reservations and stay no longer than 90 minutes. All service must end by 8pm. Breweries, wineries, and distilleries that do serve meals would continue to operate according to restaurant rules, in this case indoors with modifications, at 25% capacity or 100 people or less. Bars that don’t serve meals must remain closed.

To find out what sectors of the economy may operate, readers may visit: covid19.ca.gov/safer-economy. Enter the name of the county and choose an activity from the menu.

Orange County had already reached Red Tier levels in some metrics, including numbers of new cases and test positivity rates, but, like many other counties across the state, lagged in the health equity metric. The latter measurement was added to the Blueprint for a Safer Economy to ensure that the most vulnerable populations, who are generally lower-income people of color living in denser households, were being tested, treated, and now vaccinated at the same rate as residents in more affluent communities, more of whom can work from home. The State eventually adopted a mandate that no fewer than 40% of all vaccines be given to residents in the hardest hit communities. In Orange County those communities include two Anaheim ZIP codes just south of Fullerton and a densely populated area of Santa Ana. 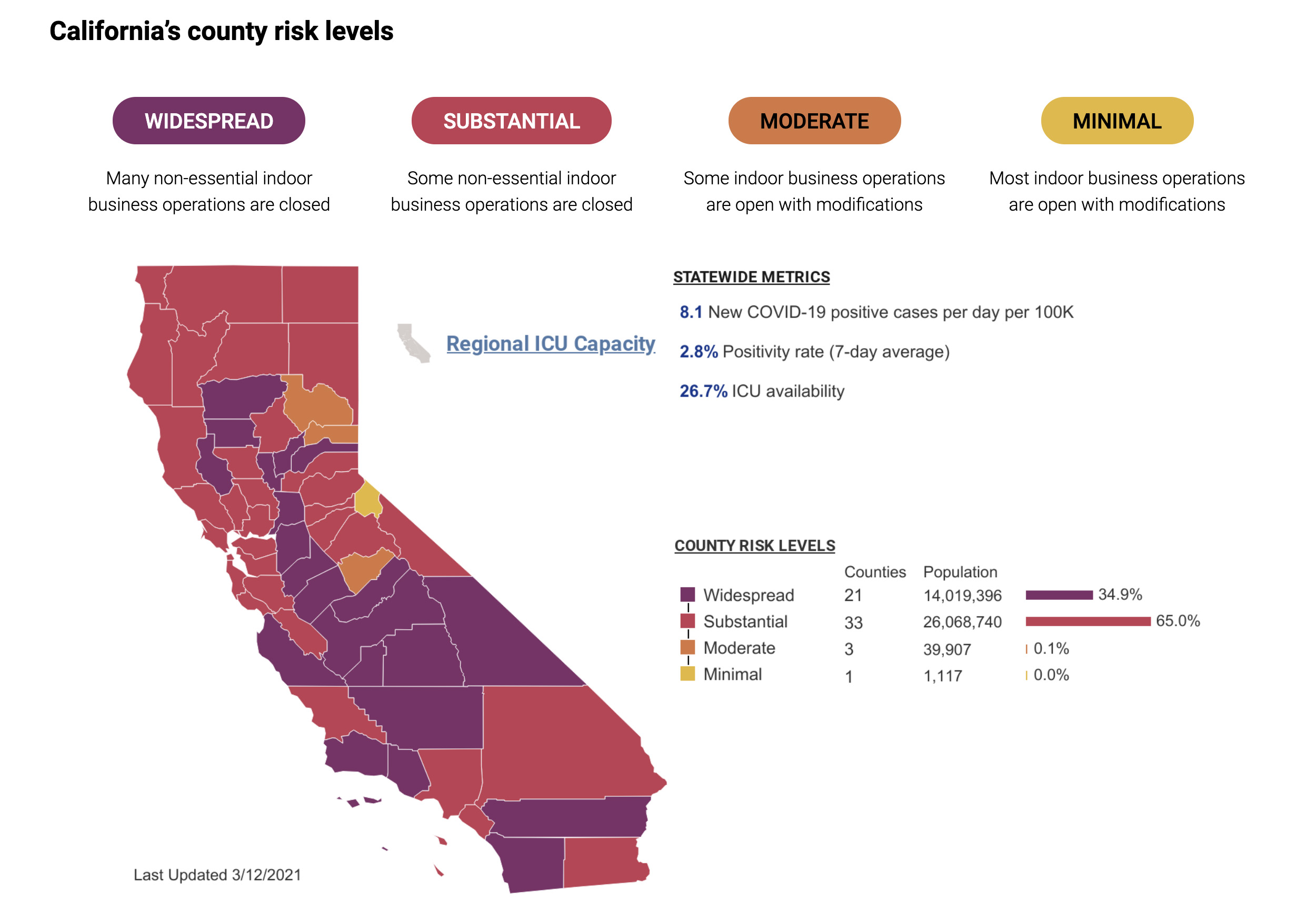 The California Department of Public Health’s March 12 announcement that 2 million doses of vaccines had been administered to date in these vulnerable communities allowed the move by many counties across the State into the less restrictive Red Tier. Orange County health officials have been attempting to address inequities in the numbers of vaccines given to populations across the socio-economic spectrum in OC by operating small one-day clinics in the hardest hit ZIP codes where residents might not be aware of the so-called SuperPOD sites or lack the transportation to get to the larger sites. Opening temporary vaccine sites at Santa Ana College and in high school parking lots, as well as partnering with non-profits to identify and contact hard-to-reach residents, seems to have paid off for the County by bringing its health equity metric in line with that required to move into the Red Tier.

As we approach the one year anniversary of California’s first statewide stay-at-home order (March 19) to combat the spread of COVID-19, Fullerton has lost 266 of our 143,134 residents. Overall, the city of Fullerton has recorded a cumulative total of 11,112 cases, 453 of them in Skilled Nursing Facilities, since the pandemic spread to the United States a year ago.