What They Mean When They Say ‘Defund the Police’

The call to “defund the police” has become a rallying cry as civil unrest erupted across the country following the brutal murder of George Floyd by police last May. Floyd was a Black man and his name is one more added to a long list of victims of police violence. As a result, attention has shifted to the question of whether or not the criminal justice system is deeply flawed.

There are misconceptions of what it means to “defund the police” and how that would ultimately affect the community.

Many mistake the word “defund” for “abolition,” which are two separate ideas. “I think that first and foremost, it’s very important to establish and to first take into consideration that there’s a difference between defunding the police and abolishing the police,” Carolina Mendez said.

Mendez is a fourth-year political science student at California State University, Fullerton, where she also serves as the president and founder of the College Progressives and vice president of the College Democrats.

“So, while abolition is focused on entirely getting rid of these departments, defunding centers on reallocating funds [to] other resources and agencies that respond to crises in the community,” Mendez said. “In many cases, police respond to nonviolent or noncriminal situations where other agencies may be better equipped to respond so that’s what motivates our call for defunding the police.”

When asked why this is a change that needs to take place, Mendez explained the importance of addressing the systemic root of the issue.

“If our youth had access to properly-funded after-school activities, whether that be tutoring or sports, or any programs, really, that seek to enrich their lives, they would not be subjected to engage in the violence on our streets that endanger them; the very essence of this movement is addressing the systemic inadequacies that currently exist,” Mendez said.

Mike Rodriguez is a Fullerton resident, public school teacher, and serves on the central committee for the Democratic Party of Orange County. He has been one of the activists leading the movement known as Justice for Hector. Hector Hernandez was a Fullerton resident killed by police in front of his home last May. 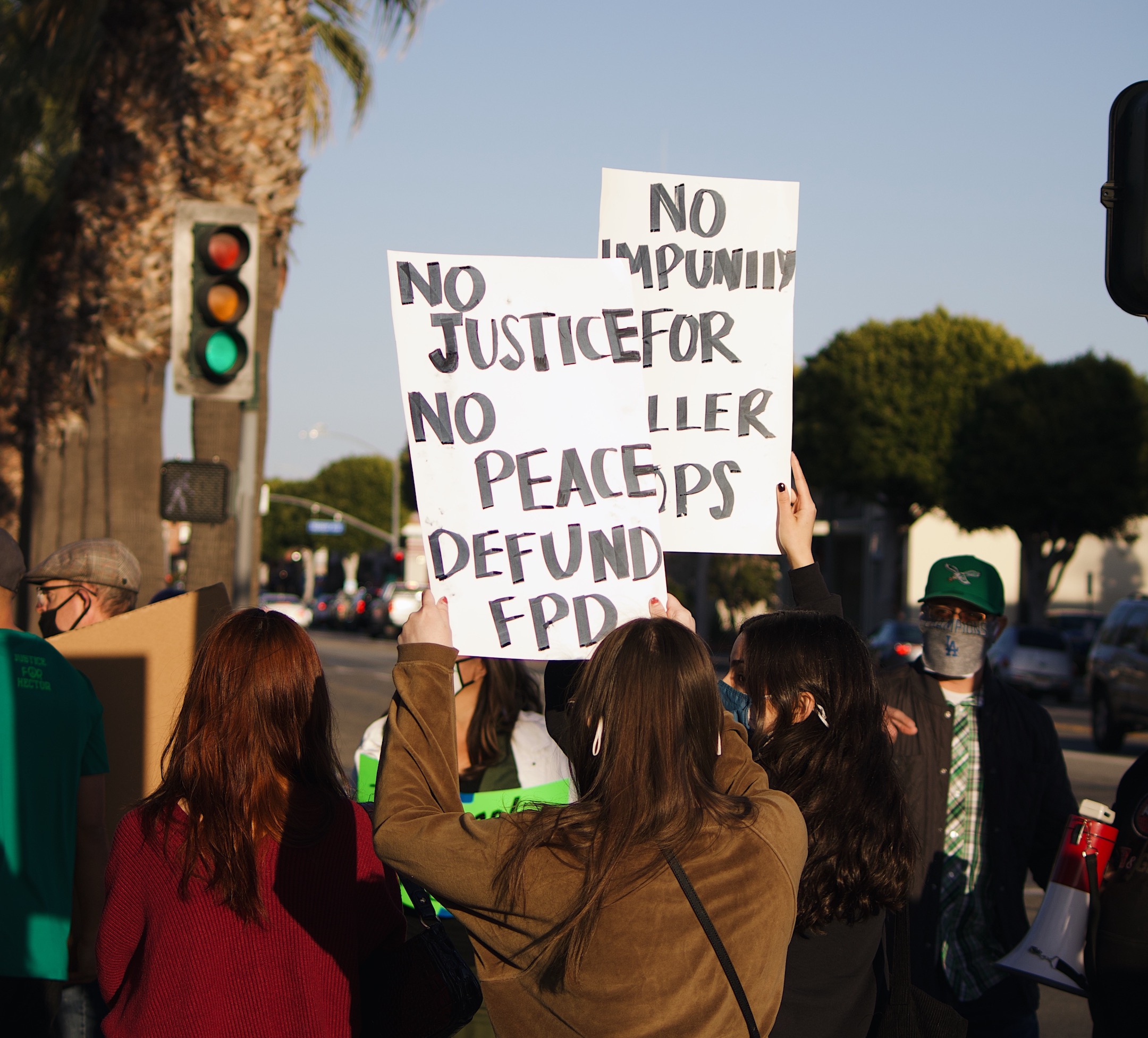 Protestors march outside City Hall on March 16 at a protest about the police killing of Hector Hernandez. Photo by Grace Widyatmadja.

“In the last decade, the City of Fullerton hasn’t had the best record when it comes to police violence,” Rodriguez said. “[Hernandez] was the third person of color in that calendar year who was killed by Fullerton police.”

Rodriguez thinks that a large part of this problem is that those who police our communities have weapons. Police did little to de-escalate the situation with Hernandez and “barked orders” at him to put his hands up with which Hernandez complied.

“If they [police] would’ve followed all of the protocols, then you wouldn’t have two boys who [are] without a father today and neighbors without a beloved member of their community,” Rodriguez said. “We’ve got to think about where our values are. Where are our values as people of the City of Fullerton and how do we budget those values? How do we see our values reflected in our city’s budget? Because if people of color and homeless people continue being killed and we see that there’s no wrongdoing being done then that’s an issue.”

Mendez said. “Urging our City Council to reevaluate their budget priorities, as many others in the nation actively are doing and have done, is at the center of this movement,” Mendez said.

This movement to “defund the police” centers heavily on communities reflecting on how their city budgets are prioritized. Cities across the country like Baltimore, Portland, and Hartford have approved reallocation of police funding to other services. Portland City Council cut $15 million from their police and reallocated $5 million to a program that assists first responders in addressing calls related to homelessness. Mendez also said that no serious deterioration of these departments was reported and no increase in crime occurred.

“If anything, these communities actually benefited because more money was going directly to the programs that would enrich their lives and collective well-being,” Mendez said.

Eugene, Oregon implemented a program called Crisis Assistance Helping Out On The Streets (CAHOOTS), a mobile crisis intervention program that provides support to the Eugene Police Department by handling calls having to do with social services. They provide initial contact and support for people who are intoxicated, mentally ill, or disoriented.

The City of Fullerton is planning to develop a program similar to CAHOOTS called Project HOPE (Homeless Outreach and Proactive Engagement). Rather than having police officers intervene in cases of homelessness, this program would call on a mental health worker or ambulance to respond to the situation at hand.

The call to “defund the police” is one met with reluctance because of the preconceived notion that it seeks to get rid of police departments entirely. American society has only ever known dependence on police for public safety, so the apprehension about implementation of this change is understandable.

“My hope is one that I share with many people in our City and all over the country, is that we’re able to work towards healthy, safe, and sustainable communities. That begins with investing funds into programs that seek to get us there,” Mendez said.

“‘Defunding the police’ isn’t just a catchy slogan that the youth likes to reference and it shouldn’t be mischaracterized as such. It’s a very real call to action that’s informed by our individual experiences that needs to be heard.”