As I was walking on the path to Laguna Lake recently, I nearly stepped on a baby bird. I had no idea what to do. One of my walking partners suggested using a leaf to move it because touching it would make the mother stop feeding it. Another person said that that was a myth, so I scooped up the baby in my hand. It was so tiny, but already had some feathers and latched onto my finger. I went to put it in the brush and found another baby bird barely visible in the dirt. 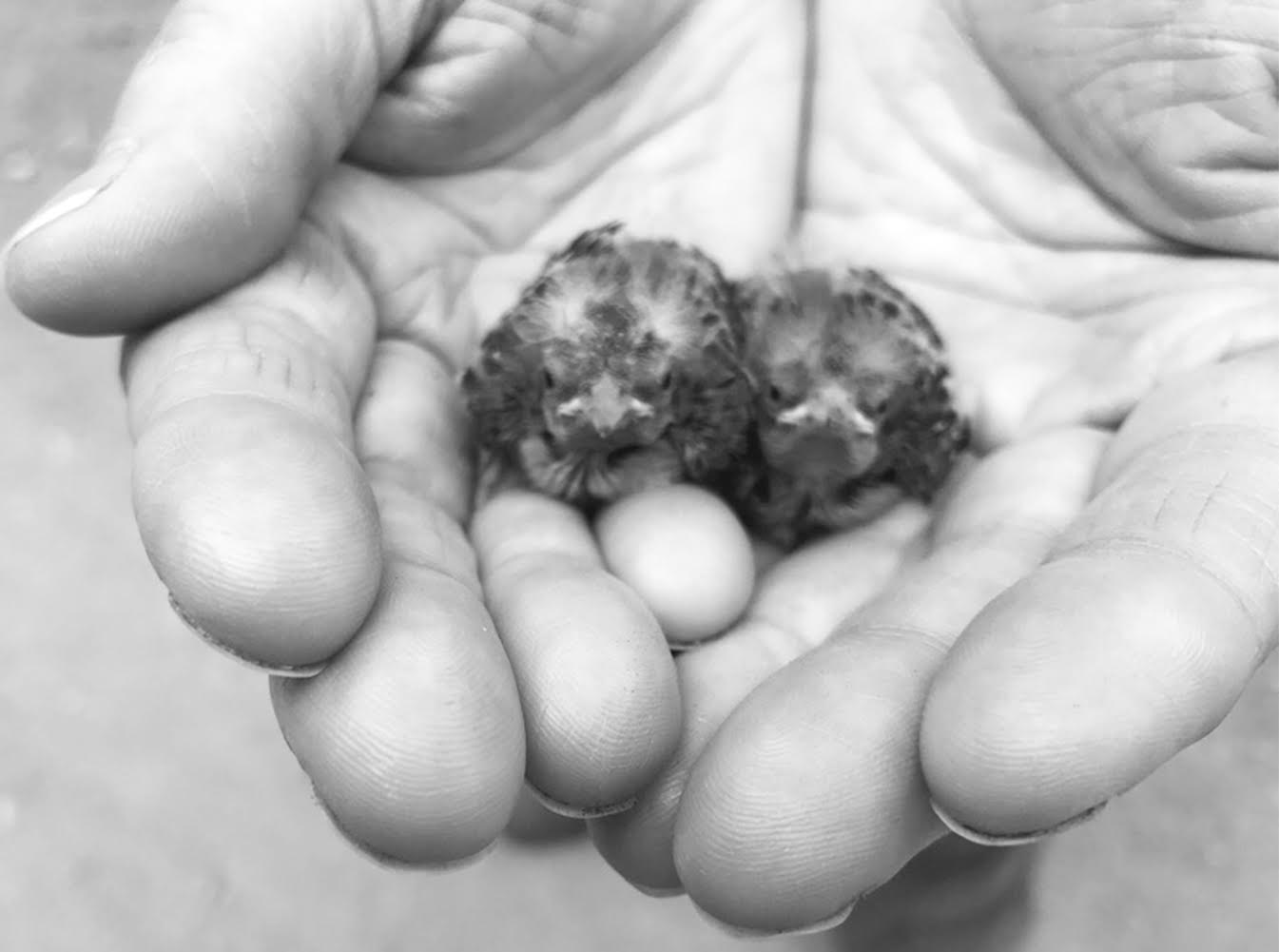 By this time several people stopped to take note of the situation. One couple said they had tried to save some baby birds to no avail. This made me worry for the baby birds and I decided to get a professional opinion on what to do, so I carried them home in my hands.

I called Wetlands & Wildlife Care Center in Huntington Beach. A woman told me to get a shallow cardboard box and duct tape it to the tree near where I had found the birds. The problem was that I had not paid attention to where on the path I was when I picked them up. She told me that they did not take baby birds. I also called several other places and left messages.

After looking up information on how to care for baby birds and finding conflicting information, I began to worry that the birds would die in my inept care. I decided to take them to a pet shop called Omar’s Exotic Birds in Brea. I flagged down an employee named Darleese Brown. She was immensely helpful. She mixed up a baby bird formula, showed me how to feed them and how often, and gave me several numbers and resources to contact.

Here is some helpful information that I learned. There are three stages of baby birds. The first stage is called hatchling, which is a newly-hatched bird. Depending on the species, hatchlings can be bald or have down-covered skin. Most down-covered birds can forage only hours after hatching, but still need their parents’ guidance and protection.

Bald hatchlings will need their parent’s warmth and regular feeding. They are then called nestlings. Nestlings are too young and vulnerable to leave the nest. If you find a nestling, they will be bald or have a bit of down on them. Put them back in the nest if you can or put them in a tissue-filled box as near the nest as possible. Watch them for an hour to see if a parent finds them. If not, contact Avian Underdogs Rescue Association at (714) 746-1591.

Fledglings have feathers and can hop and flap their wings. They will continue to be fed by the parent who remains close. Place them out of harm’s way, but not far from where they jumped out of their nest. Watch them for an hour to make sure the parents are still around to feed them.

If a baby bird needs your intervention, here are some quick instructions on how to feed and care for them. Place them in a lidded box with tissue and air holes. Place a heating pad set on low and wrapped in a towel beneath the box. They need to be out of direct sunlight and stay around 97 degrees.

All food must be prepared in small quantities just before feeding and the leftovers should be thrown out as bacteria will hurt the babies. Food should be around 102-106 degrees. A bird-feeding syringe has a curve in it. That curve must go toward the left when feeding it. You will see a small sack in its neck (the crop) fill up with the formula. Fill just a bit at a time about every 20 minutes. 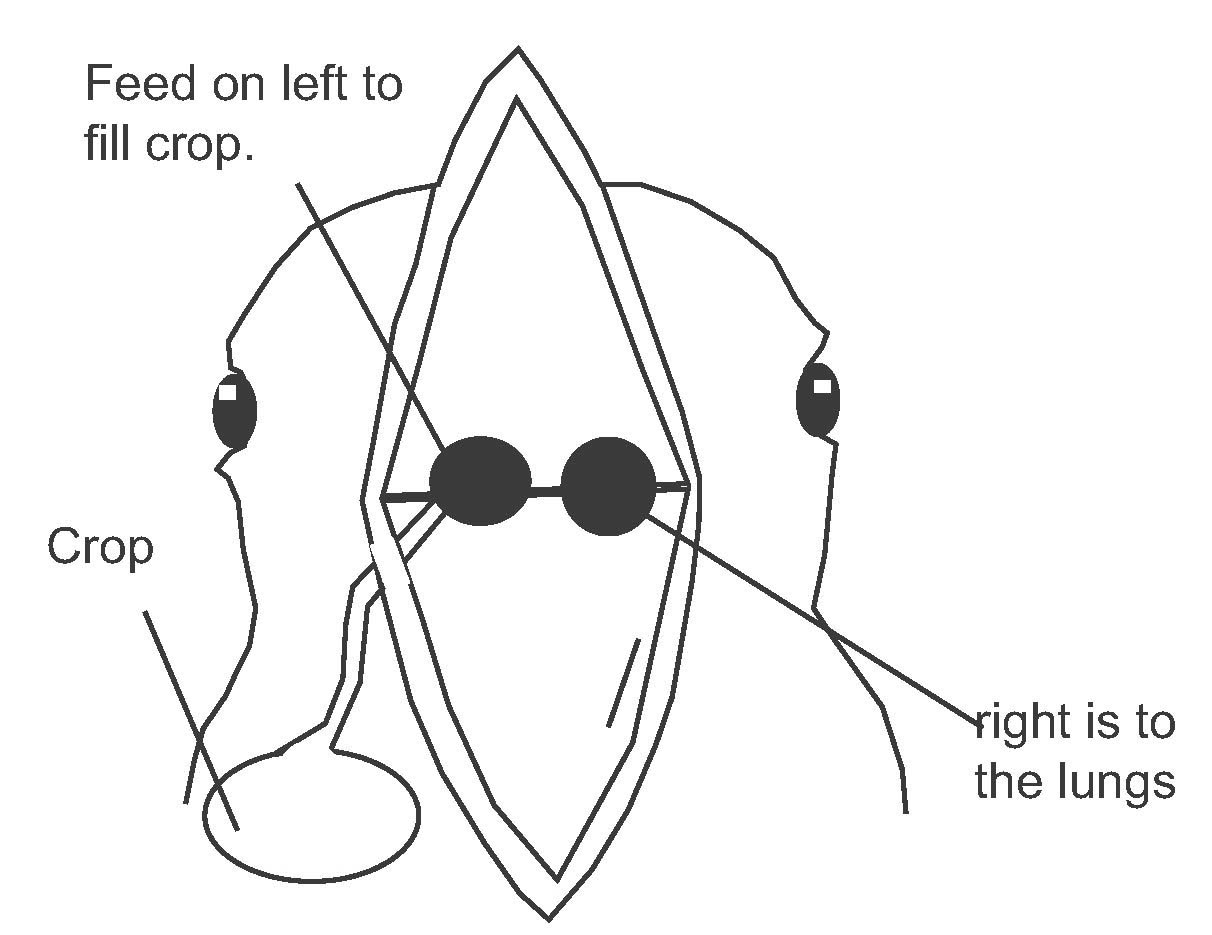 Diagram of where to feed baby birds, to avoid drowning them.

There is no need to give them water as there is enough in the formula mix. If the syringe curve is placed toward the right as you try feeding, the formula will go into the lungs and asphyxiate the baby bird. See diagram above.

If you see any of the following indicators, seek professional help from a rescue association or veterinarian:

Listless, droopy wings or head, not accepting food, lack of feeding response, slow or lack of crop (the bulge in their neck after feeding) emptying, poor weight gain, slow growth, abnormal posturing, or abnormal wing and/or leg positions, abnormal or lack of droppings, wetness or food on skin over the crop, which indicates a possible burn from food that is too hot.