Trekking Along the Sally Pekarek Trail to Emery Park

Many people may have noticed the equestrian trail running along the street in front of the Target shopping center off West Malvern. The pathway proceeds past the Albertson’s and seems to disappear from street view once it reaches a certain point. But what people might not have noticed is that off the corner of Malvern and Gilbert Street, there’s a wooden sign for a hiking trail, with the words “Sally Pekarek Recreational Trail” painted in yellow. So, to start off the new year, I decided to travel down a trail less travelled. 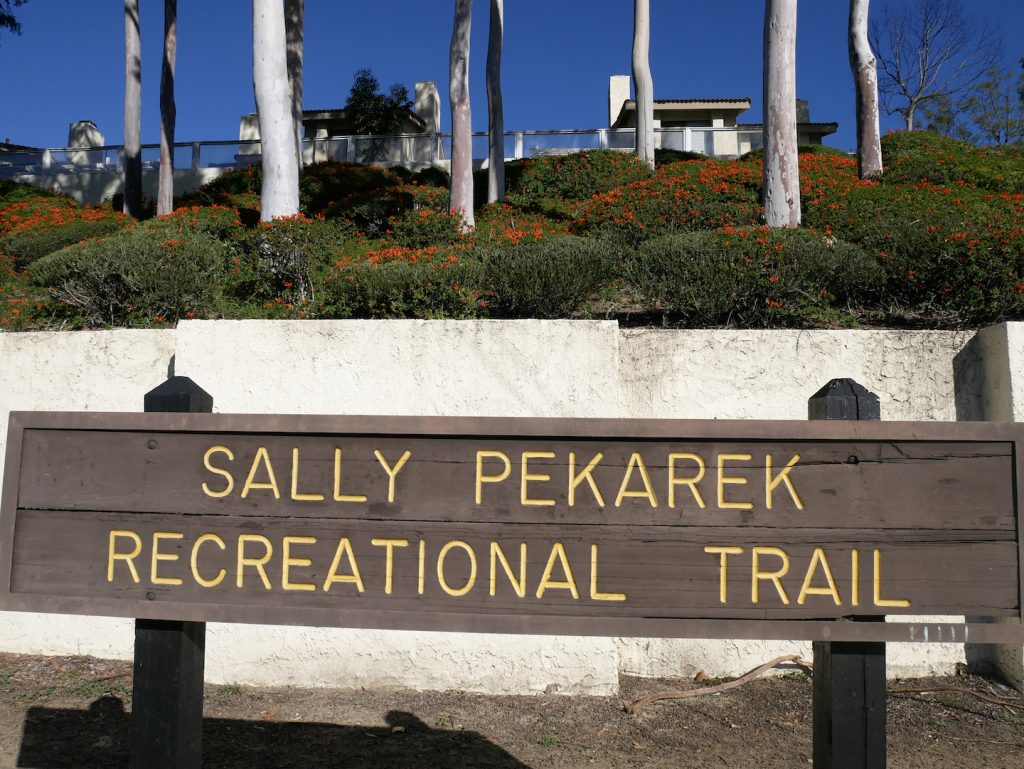 Sally Pekarek, the trail’s namesake, was a former city liaison for the Fullerton Recreational Riders. Stretching about 0.8 miles, this trail is ideal for horse riders, hikers, bikers and outdoor enthusiasts. It starts on the northwest corner of Gilbert and Malvern and parking is more convenient than it looks. Parking my car on the south side of Albertson’s, I carried my mirrorless camera mounted to my tripod and walked behind the grocery store to an opening in the bushes, which led down a dirt incline to the equestrian trail running along Malvern.

Crossing Gilbert, I found the start of the path very welcoming. Just behind the wooden sign, the trail followed a white wall up a small hill and turned a corner. It was rather wide and well-maintained with trees and brush hiding the trail from street view. However, I wouldn’t recommend visiting the Sally Pekarek trail after a hard rainstorm since the path was muddy even when I visited on a sunny day.

Except for a wide flat area where you turn left to Emery Park, Sally’s trail has strong fences on either side. The trail was tree lined and very cool in the morning sun. Parts of the path were shrouded in shade and rather chilly, so make sure to bring a jacket. Green vines with orange flowers wrapped around one wire fence, where I heard and saw some hummingbirds and bees. Behind the fences on both sides of the path, all I could see were the backs of houses within the Sunny Ridge community. At the highest point of the path, there really was no view since I could see more of the surrounding houses. 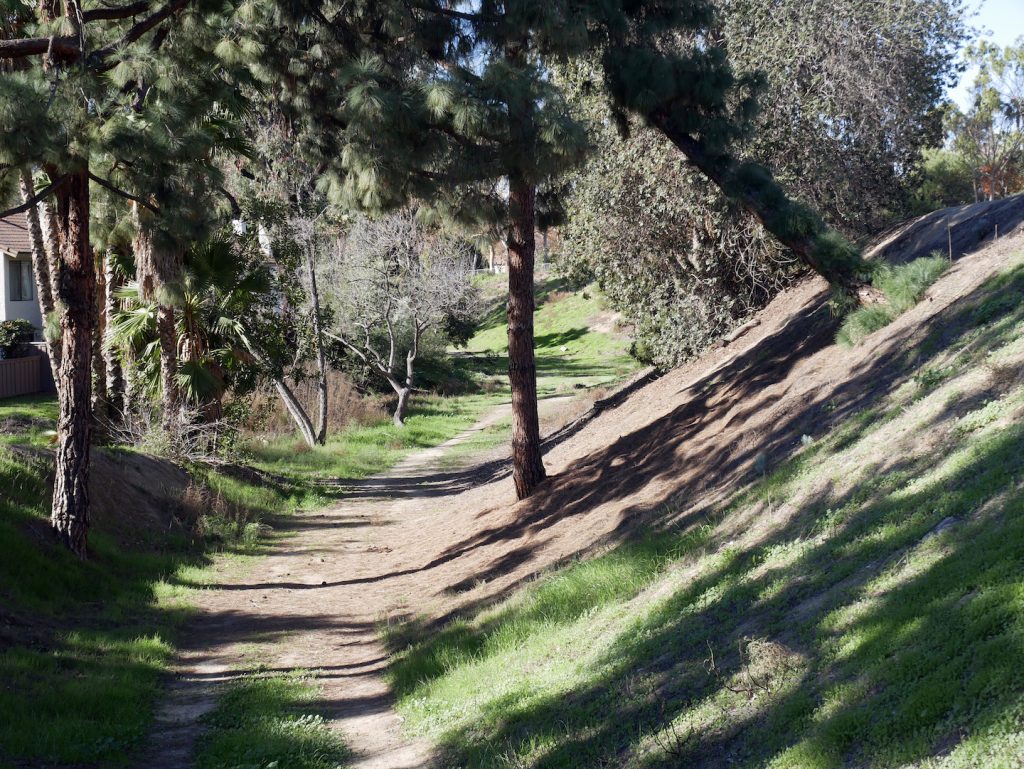 Eucalyptus trees were sporadically placed throughout. In fact, at one point, there was a weird bulb-like object that appeared to be covered in tree sap sitting in the middle of the walkway. Eucalyptus
trees further up the dirt trail looked as if they were bleeding sap, which was dripping down the white bark of the trunks.

When I went home to my computer, I discovered that a eucalyptus tree dripping sap is not a happy plant. According to the website, Gardening Know How, “the condition often indicates that the eucalyptus tree is under attack from a type of insect called the eucalyptus borer. A tree oozing sap onto limbs or trunk is very likely a tree attacked by a long-horned borer insect. Several species of long-horned borer can damage eucalyptus trees. They are attracted to trees suffering from water stress, as well as freshly cut eucalyptus wood. The tree responds to the wounds by flooding the holes with a chemical called kino or sap to kill or wash out boring insects.”

There are a few bewildering things about this trail. As the trees petered out, I reached a wide, flat area where the path split into two. Bougainvilleas grew along the fence.

There were no signs telling me where to go, so I continued straight instead of turning left to Emery Park. That was a mistake since I hit a dead end. The trail stopped at a concrete block wall. According to the website, Fullerton Walks, “at several points along the way you will see manhole covers with the word Edison. It is actually just access to an underground power line which Edison tricked the city into maintaining for them.” When I was there, I really didn’t see anything except for a pole with power lines connected to it once I reached the brick wall. 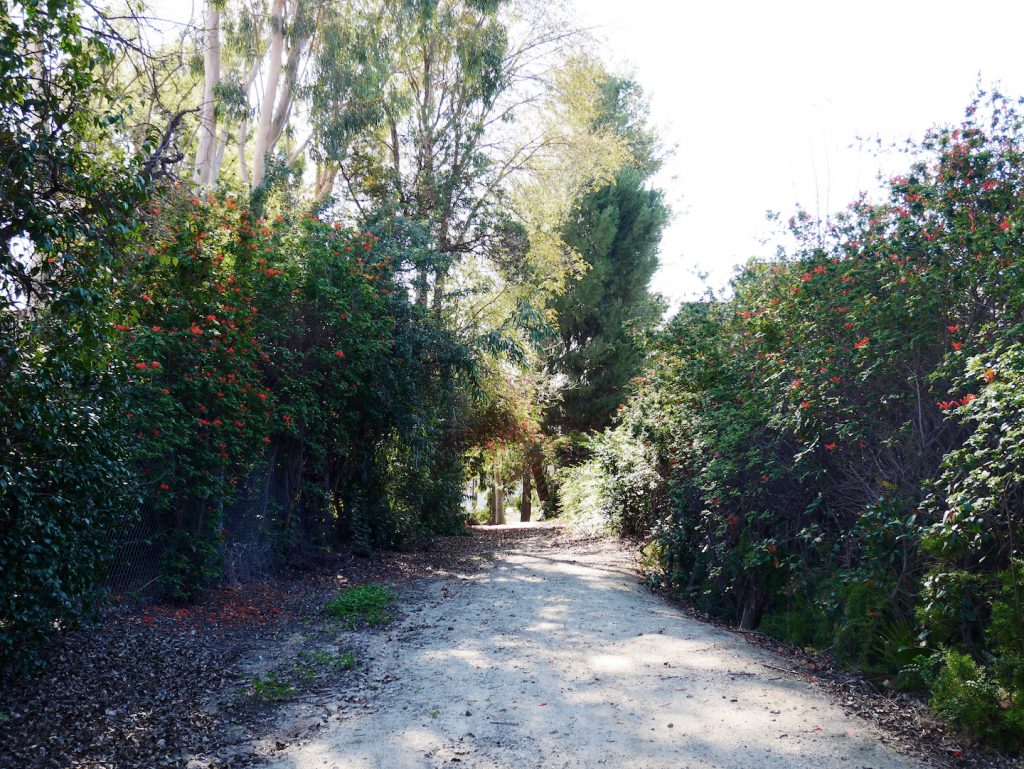 Also, once you enter, there’s only one way out and it’s not at the end. It’s half way along the trail where it meets a path to Emery Park. I encountered a wide clearing with steep dirt hillsides almost all the way around, which opened onto Sunnyridge Drive. It seemed like there should’ve been a sign directing visitors where to go, but there wasn’t.

From the wide area, I crossed the street and made my way through an open channel with vegetation, which looked overgrown and rarely used. This seemed like the perfect area for water from the street, sidewalk, and nearby park to run off. In fact, there was no one but me walking on the Sally Pekarek Trail and the channel. The path up to the park was an easier hike than the previous trail. It was very deep and extremely wide, but that was just the natural way the land was at the time the developer put in homes.

The large channel wound its way around trees and other vegetation growing down the hillside from Emery Park.

It eventually ended up at a small, dark tunnel that ran underneath the street to connect with a sidewalk on the other side. The floor of the tunnel was covered in mud and graffitti could be seen on the walls. It was rather shadowy inside and looked like the perfect place to film a horror movie. This is where I stopped. According to Fullerton Walks, “the tunnel is meant for walking and leads to a meandering sidewalk between condominiums. It is obviously for the folks that live there to give them access to the park.” 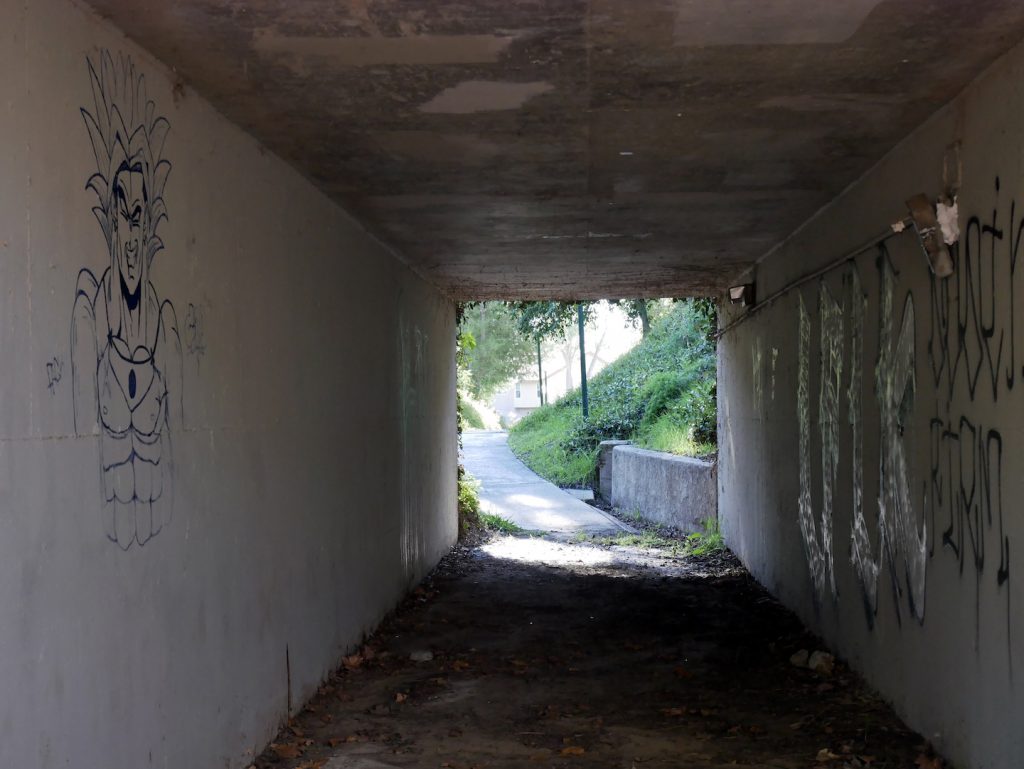 Instead, I hiked up a small hill and walked through Emery Park, which stretched for almost two blocks. The leaves on the trees still had their autumn colors. A little playground with a slide, swings and climbing equipment looked like a good place for children to play. There were no drinking fountains or rest- rooms. But there were several picnic benches and winding pathways for relax- ing strolls and exercising. Local bluebirds are also supposed to dwell in specially made bird houses hidden high atop the park trees.

Overall, the hike through the Sally Pekarek Recreational trail was a strange, yet interesting experience. However, I would recommend bringing along some water and a friend or family member to walk with you.

Click HERE to see my video of the hike along the Sally Pekarek trail.