Monday January 28 Neighbors United for Fullerton (NUFF) hosted a Forum for the 26 City Council Appointment Applicants vying to fill the vacancy created when Jesus Silva was elected in District 3, 2 years into his 4 year at-large term.

18 applicants participated, each giving a minute and a half opening statement followed by a series of “Lightning Round” questions in which answers were expected to be brief or even a simple yes or no.

Mayor Jesus Silva opened the forum by thanking the City Council Appointment Applicants. He said he had read through the applications and recognized, “A lot of quality and a lot of talent.”

Josh Newman, Chair of NUFF, moderate the forum. He said that the City had asked NUFF, a non-partisan non-profit, to host the applicant forum in place of NUFF’s planned community program. NUFF typically hosts pubic meet and greet events for candidates as part of their endorsement process, but Mr. Newman stated that NUFF would not be taking a position on the appointee applicants. 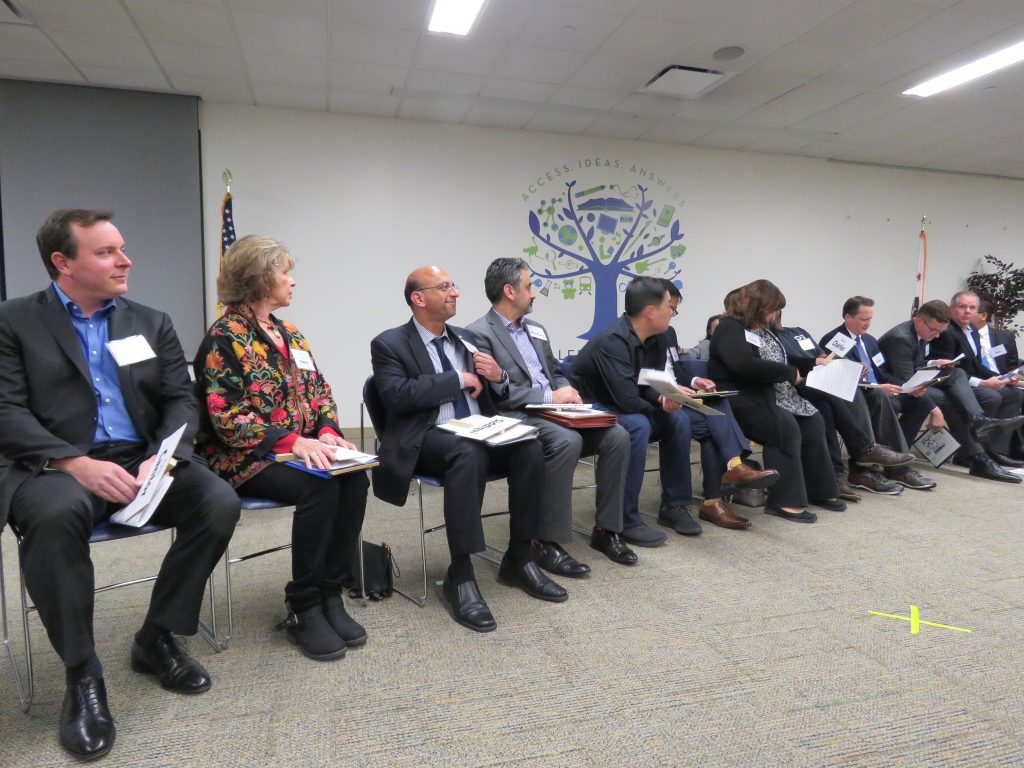 Larry Lloyd lives in District 2 and has been in the city for 30 years. He worked for the Taco Bell Corporation for 10 years in finance and is now the Chief Financial Officer for the Catalina Island Conservancy. He said that working for the Conservancy was like running a small government.

Josh Ferguson called the appointment process a “farce” and the council could have avoided the vacancy problem if the District Elections Map had not been gerrymandered. He said pensions are “not getting addressed” and the city will raise taxes.

Rudy Salazar is a 33 year resident living in District 1. He created his business, CalBIT to help Commercial drivers understand BIT inspection rules and regulations. He wants to reduce the size of the homeless population.

Ryan Cantor served on the Library Board of Trustees where he says they “do a lot with little (money).” While on the Planning Commission, he said he was the only member who voted not to open another bar downtown. He said residents have a right to have a full City Council to hear their concerns.

Jan Flory served on City Council twice before beginning in 1994 and again in 2014 for a total of 12 years. She said she has “historical knowledge” and relationships with city staff and regional boards. While on Council, she said she supported historical preservation and oversaw “serious” law suits.

Omar Siddiqui is a trial lawyer and a lawyer for Friend of Coyote Hills. As an Engineer and scientist, he suggested that the City use clay pellets to plug the leaks in Laguna Lake. He has been on the Chief’s Advisory Committee for both former Chief Hughes and current acting Chief Dunn.

Ryan Alcantara has lived in the city for 20 years and has served on the Citizens Infrastructure Review Committee (CIRC) for 8 years. He has a public policy background and wants to fix the roads and critical infrastructure.

Roger Kim immigrated to the US when he was 3. He’s a graduate of New York University with a Bachelors in Political Science. He has worked abroad and now works in semiconductors and real estate.

Fred Jung has lived in Fullerton for 30 years. He was Inspired to apply because President Obama said “Change only happens when ordinary people step forward.”

Shana Charles is a Public Health professor at CSUF who is also her Girl Scout Troop’s cookie coordinator. She recently ran for School Board but she was not elected. She has a Masters and a PhD in policy.

Damion Planchon said that finances are the biggest challenge and that will “force difficult decisions.” He said he wants to hear ideas from the community.

Alvin Curtis Gamble is a homeless activist, a Navy veteran and a former OCTA bus driver and real estate broker. He serves on the Continuum of Care Board and wants to get shelters into SB 2 zones.

Kenneth Fuller is a career prosecutor a Reservist JAG, and runs a business. He teaches fifth graders and advocates for Community Policing.

Chris Gaarder works for County Supervisor Andrew Do and is the Chair of the Planning Commission where he says they are better regulating alcohol downtown.

Larry Bennett ran for City Council in 2016 and came in fourth after Jesus Silva. He is a certified financial planner. He said that half of the people will be unhappy with the City Council’s appointment and an “Election is the only way to go.”

Arnel Dino has been in the city for 36 years and lives in District 3. He served on the Economic Development Commission, CIRC, and the Water Rate Study Ad Hoc Committee. He works in non-profit management and grant writing.

Kevin Pendergraft lives in District 2 and said he will not run in 2020. He has lived in the city for 25 years and has been the President and CEO of a credit union for 20 years. He has served on the Planning Commission for 6 years and with the Chamber of Commerce and Fox Theatre Board in the past.

Roberta Reid said it doesn’t matter in which district she or the other applicants live because it is an at large opening.

Lightning Round Questions Provided to Applicants by NUFF in Advance