Council Majority Doubles Down on Decision to Remove Whitaker from OCWD

After much discussion and input from the public, on Feb 19 council voted 3-2 (Silva, Whitaker “no”) to reaffirm their Feb 5 decision to remove Councilmember Whitaker from the Orange County Water District Board and replace him with council member Ahmad Zahra.

At their Feb 5 meeting, around midnight, councilmembers Zahra, Fitzgerald, and Flory voted to make this change. However, this decision was later determined to be a Brown Act violation as it was not properly aggendized and the public didn’t have an opportunity to comment on it.

At the Feb 19 meeting, the item was bought back, and several members of the public commented on it, most of whom were opposed to the change. 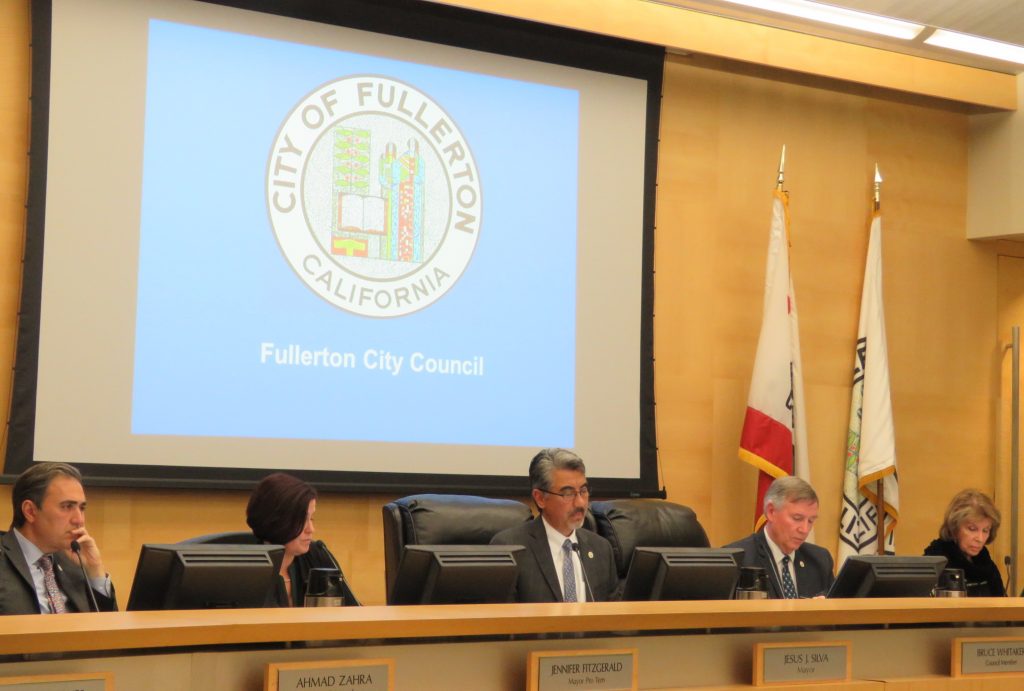 Before the public weighed in, council member Zahra said, “I’d like to apologize for the miscommunication that happened. The intention was to bring these [appointments] back for reconsideration, considering now that we have a full council.”

He said that his intention “was not specifically to consider or appoint Jan Flory, but to open the dialogue again, considering she is now part of that council.”

Whitaker responded that it was unusual for council to re-consider appointments it had just made.

“A few weeks prior, at that council meeting, I was re-affirmed in my role at OCWD in a unanimous vote by this council. So I think we’re becoming a laughingstock in terms of just on a whim being able to bring up this entire slate again,” Whitaker said.

Mayor Protem Fitzgerald said, “I would just clarify, we don’t need a legal reason to bring these up again. It is our prerogative to bring these up at any time that we want. As long as two council members aggendize an item, it can be aggendized, and councilman Zahra and I wanted to reconsider these.”

“Just because it can be done doesn’t mean it’s not a destructive process,” Whitaker replied.

Members of the public line up to speak to council.

Several members of the public spoke on the item, and most were opposed to removing Whitaker.

“I’m here tonight because I believe something did go terribly wrong at the last council meeting. On an agenda item that was not properly aggendized, I witnessed what appeared to be a coordinated move by three council members to remove Fullerton’s representative on the Orange County Water District Board with zero rationale or justification, from my point of view,” said Planning Commissioner Kevin Pendergraft.

“I believe that removing an appointment mid-term with no real justification, besides whatever individual political motivations might be, is not good governance,” said Jennifer Harris.

Many residents argued that it would be unwise to remove an experienced representative like Whitaker, who is also on the Santa Ana Watershed Project Authority (SAWPA), and is in a unique position to advocate for Fullerton water users.

“I think it would be irresponsible and harmful, at this point, to our residents of Fullerton to even consider removing councilman Bruce Whitaker from the division 10 Orange County water district and, as a result, also from his position as secretary treasurer on SAWPA and would leave the Fullerton community without an experienced, knowledgable voice with regard to keeping high quality water and resource wells free from harmful chemicals,” said Beverly Gunter.

Jane Rands said that decisions like this should not be influenced by political differences: “Bruce happens to be in a very strong position right now and we all need to get behind him in that position. I’m a registered Green and he’s a libertarian Republican, okay. If I can make that jump, you all can make that jump.” 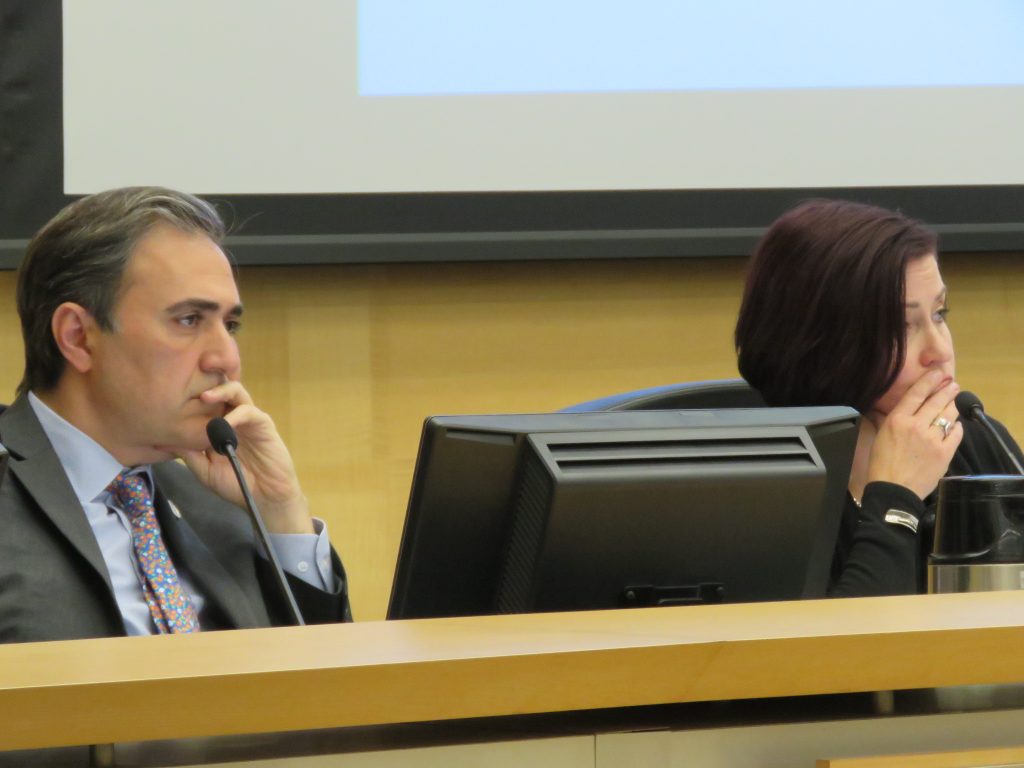 Councilmember Zahra and Mayor Protem Fitzgerald, who brought up this item, listen to public comments.

Though the majority of public commenters were opposed to removing Whitaker, some were in favor of it.

Jose Trinidad Castaneda, who supported removing Whitaker, said that Zahra, as a representative of District 5, would be in a unique position to speak up for the residents of south Fullerton, who are disproportionately affected by the north basin groundwater contamination.

“It makes perfect sense to have a district 5 councilmember represent the entire city on the OCWD Board because that means we’re going to have someone directly on the ground who is affected by this super plume be able to better negotiate with the EPA and with other parties to get the best results for all of the city of Fullerton,” said Castaneda.

Joshua Ferguson countered this claim by pointing out that the EPA is already involved in the north basin plume, and that they will finish their remediation study in 2020, when council member Whitaker’s term expires.

“If the plume is the big issue and remediation is the big problem, and councilman Zahra’s new eyes matter on this, wouldn’t it make more sense maybe having you shadow Whitaker because then when his term expires in 2020, then in 2021 when the actual remediation is scheduled by the federal EPA to commence, you could at that point be at those meetings and actually work on the problem being solved?” Ferguson asked rhetorically.

Jane Reifer, a resident of district 5, said she was a supporter of Zahra, but that “the way this recent re-appointment was done was in poor form.” 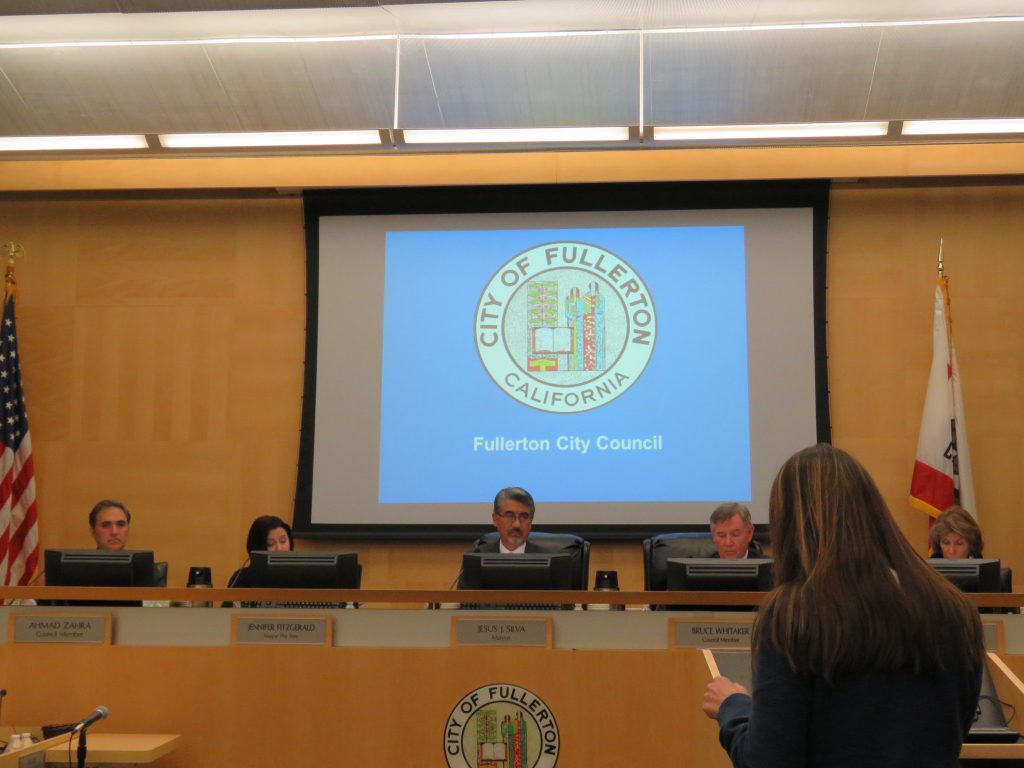 Jennifer Harris urges council not to remove Whitaker from OCWD.

Whitaker argued that his experience and unique position on regional boards make him a good representative on behalf of the city.

“We have some significant votes coming up very soon in April. And to throw a new board member in there without having any chance at a learning curve, I think is to do a disservice to our representation and to those decisions,” Whitaker said.

He called the effort to remove him “an unwarranted attack, an abuse of the system, an ambush.”

“I understand the council has the authority to do what it wants, but real wisdom resides sometimes in restraining yourself from doing something; just because you have the power to do it certainly doesn’t make it the right thing to do or the wise thing to do,” said Whitaker.

Zahra said that his intention in replacing Whitaker on the OCWD board was not personal, but was motivated by his concern for disadvantaged people in his district.

“Yes, maybe it’s a little overzealous on my part, but it is the necessity of the struggle that I’m seeing every day in our city where half our population now are struggling,” said Zahra, “The poverty in our city has expanded. And what I see is a water infrastructure that is crumbling. We’re considering water rates now that are going to affect disadvantaged communities disproportionately. So yes, of course, I want to do something about this.”

“I’ve been consistent in saying that the city is better served by a rep who will regularly report back to this council and the community about these pressing issues like Poseidon [proposed desalination project] and like the North Orange County plume and I have to say I’ve heard more from Mr. Whitaker about his service in these last two meetings than his entire body of service,” said Fitzgerald.

Flory said she agreed “with members of the audience who said that this process was poorly executed,” however she denied the allegation that the decision to remove Whitaker was a “prior agreement.”

Flory also bought up the fact that Whitaker had voted to remove her from the OCWD back in 2016, after her council term had expired.

“One thing I did appreciate with audience members is that the theme running through all of your comments was experience…Mr. Whitaker has experience; Mr. Zahra does not. Well, if that is the case, I actually could have parroted all of the reasons why I should have been appointed to the OCWD after I decided not to run for election in 2016. At that point in time, I had served on the OCWD for seven years. Mr. Whitaker had served for one year,” said Flory.

Flory said she supported Zahra because “he is a quick study [and] he has a medical background.”

Mayor Silva said, “I think the dismissal of Mr. Whitaker from the board is a little premature, without just cause,” citing Whitaker’s position on SAWPA.

“If his term’s not over, and he hasn’t done anything that warrants being kicked off, I would move to let him finish his term,” Silva said.