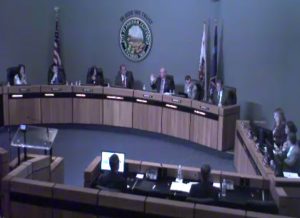 The Anaheim City Council majority voted 5-2 to grant a quarter million dollars to “Anaheim First,” a new non-profit formed by the Anaheim Chamber of Commerce.

The grant is to conduct a citywide assessment program partnering businesses and residents to prioritize spending of $250 million in city funds to revitalize neighborhoods over the next 10 years – as promised in Mayor Sidhu’s 2030 Neighborhood Investment Program.

While all council members voted in favor of the mayor’s program, both Moreno and Barnes were the only two questioning the grant of a quarter million in funds to the new non-profit. They asked that the proposal be continued to the next meeting where more information on the Anaheim First group, its board members, non-profit status, and where the money is coming from, a list of performance expectations and qualifications of the consulting group the organization will be hiring, plus oversight of the program could be discussed. The motion was not supported by the other five council members.

The agenda back-up stated that the quarter million will come from existing Neighborhood Reserve Funds. Anaheim First will hire an un-named consultant to accomplish the task of preparing an “Anaheim Community Assessment” through town halls, meetings, and surveys. A private matching grant of a quarter million from an un-named source will add to the funding. In addition, the mayor will establish an Ad Hoc committee consisting of himself and two council members who will provide oversight of the assessment, plus reports on progress of the investment program.

Councilmember Moreno wanted to know more details on where the ten-year $250 million figure was coming from since, according to the recent budget workshop held by the city financial director, “we will be barely breaking even over the next five years and we are not expecting a huge surplus of funds.”

According to Mayor Sidhu, the $250 million is “new” one-time money expected to come to the city from recent land sales and incremental revenue over a 10-year span from development of the Platinum Triangle and the Anaheim Resort District.

However, no new money was identified for the first year of the program. Staff said that the $20 million for 2020 – includes $10 million in reserve funds, $6 million in state transportation funds, and $4 million previously designated by council to the neighborhood improvement program.

Also noted by Councilmember Moreno was the inaccurate staff report characterizing Anaheim First as “a resident-driven grass roots non-profit” – when it is actually organized by Anaheim Chamber of Commerce and the related hotel tourist group Visit Anaheim, and Anaheim Community Foundation.

Moreno pointed out that the staff report stated that “Anaheim First is a 501(c)(3) non-profit, though it did not appear to be registered and had no website, or required listing of board members. (According to the California Secretary of State website, Articles of Incorporation of a Nonprofit Public Benefit Corporation – Anaheim First – were filed a on April 11, 2019 – a few days before the meeting – and it shares the same address as the Anaheim Chamber of Commerce.)

Councilmember Barnes suggested at least some of any extra funds coming in should go to pay down the pension liability – since that issue will continue to grow and affect the whole city. She also said she is in constant contact with residents in her district and know what they want and that they elected her to make it happen. “We don’t need to pay a group to tell us what our residents want,” she said.

Both councilmembers Barnes and Moreno asked why any new money coming to the city would not go directly to the priorities already identified.  They also said that granting such a large sum to Anaheim First, minus paperwork, appeared to be a run around the usual RFP process and contract regulations ordinarily required when the city hires consultants.

“So, we are paying Anaheim First a quarter million to hire a consulting group -with no background provided- to conduct a study. Doesn’t that violate the city contract policy?” asked Moreno. The City Attorney said that the consultant would not have to be vetted by the city through the regular Request For Proposal and contract process because they are being hired by Anaheim First, not the city.

Mayor Protem Kring said,  “Anaheim First was started eight months ago – should we just throw away all their work?” Councilmember Moreno replied, “If this group has been working for eight months why is this the first we have heard of it?”

Anaheim First, according to the staff report, will consist of 100 members (15 residents per district, 10 businesses, and community non-profits).

Both Moreno and Barnes wanted to know why the public from each district as well as the district representatives were not notified of the Anaheim First program? While thanking any members of the public who were involved, both council members said that if there are 15 citizen positions for each district available on the committee – the program should openly recruit neighborhood residents – instead of having them be appointed by the Chamber of Commerce.

Before the final vote to allocate the quarter million to Anaheim First, Councilmember Moreno asked all council members a question. “Will council members who have NOT received campaign contributions from the Anaheim Chamber of Commerce PAC raise their hands?”  Only Moreno and Barnes raised their hands.

A video of this meeting is online on the City of Anaheim website.

Since the meeting Anaheim First has launched its website available at http://www.anaheimfirst.org. The board members are listed as  Anaheim Chamber of Commerce CEO Todd Ament, Visit Anaheim CEO Jay Buress, and Kay Carpenter, Amelia Castro, and Anthony Novello.