This is the third article in a series about the past, present and future of railroads in Fullerton and Orange County. The previous article in the series, in last month’s Fullerton Observer, explored the history of the Atchison, Topeka and Santa Fe Railway in Orange County, and its role in the establishment of Fullerton.

By the time of the 1912 map shown below, almost all of Orange County’s communities were connected by rail. Note that this map predates both the Pacific Electric and Union Pacific branches from La Habra to Fullerton. 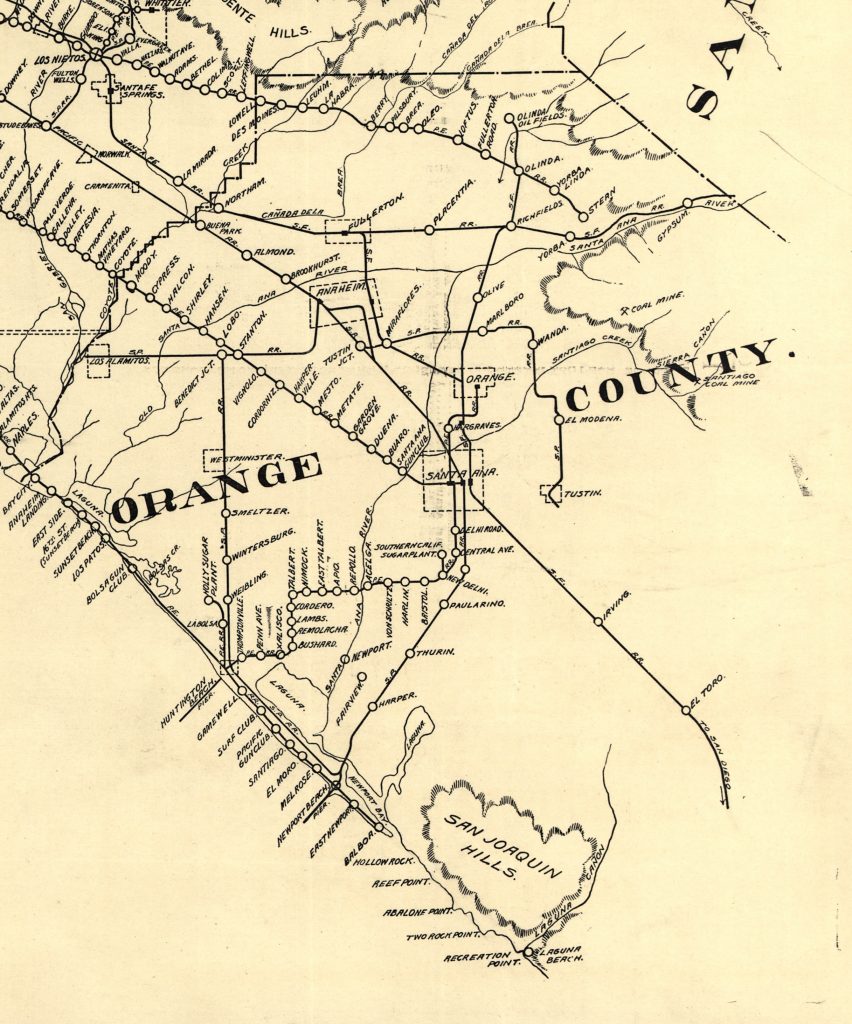 By the 1920s the PE system was the largest interurban electric railway system in the world. At its peak, over 900 “Red Cars” operated more than 2,700 daily trains on nearly 1,100 miles of track across Los Angeles, Orange, San Bernardino and Riverside counties.  Huntington Beach in Orange County, and Huntington Park in Los Angeles County, were both started as PE-backed ‘streetcar suburb’ real estate developments named after the system’s founder.

System-wide PE ridership peaked during World War II with over 100 million annual passenger boardings, or an average of about 300,000 per day. The regional PE interurban railroad reached Fullerton in 1917, as described by the city of Fullerton website:

“The Pacific Electric Railway came to Fullerton in 1917, as an extension of the line from La Habra at a cost of $425,000. The Depot was constructed soon afterward in 1918, at a cost of $10,000. Although passenger traffic was never lucrative, the large citrus industry provided significant freight revenue. Passenger service was discontinued in 1938, while freight traffic continued into the late 1940s. Around 1950, the depot began a new life as a Greyhound bus depot, which lasted until 1976.”

Remnants of the PE right of way in Fullerton include what is now the Juanita Cooke Greenbelt & Trail, between the northern city limits and the Harbor/Berkeley intersection, as well as a narrow vacant lot between East Wilshire and East Amerige avenues, south of Fullerton College. 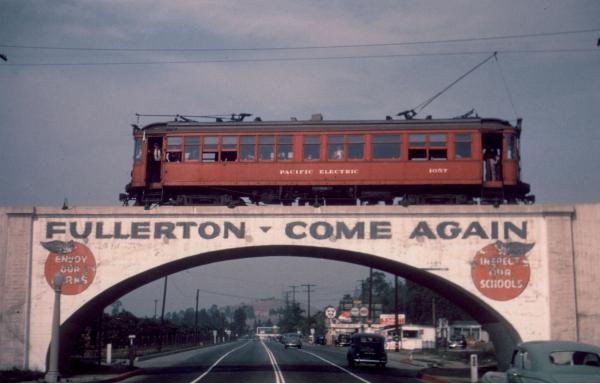 In the next issue of the Fullerton Observer, part 4 of this series will be on the history of the Union Pacific Railroad and railroads in present-day Fullerton.

The author would like to thank Harold Benash, President of the Southern California Rail Plaza Association/Fullerton Train Museum (www.fullertontrainmuseum.org ), and Elrond Lawrence – Executive Director of the Los Angeles Railroad Heritage Foundation (www.larhf.org ), for their historical review of the drafts of this article.