This is the fourth article in a series about the past, present and future of railroads in Fullerton and Orange County. Previous articles in this series in Fullerton Observer, explored the local history of the Southern Pacific, Santa Fe, and Pacific Electric Railway.

The Union Pacific (UP) was the third railroad to arrive in Fullerton, following the Santa Fe and the Pacific Electric before it. The UP was seeking to compete with the Santa Fe for the lucrative long-distance shipping of Orange County citrus and oil, as well as offering passenger service.

In 1923, the UP completed a branch from Los Angeles via Whittier and La Habra, and soon after opened its own Fullerton depot across the tracks from the Santa Fe depot. The UP track through the hills of western Fullerton still exists, going north from a junction with the BNSF mainline at Commonwealth Avenue, in parallel with West Bastanchury Road and North Harbor Boulevard into La Habra.

In recent years however, this branch was abandoned by UP between Fullerton and La Habra. The Union Pacific depot building was moved north across the railroad tracks to its current location in 1980. The Fullerton UP depot is on the National Register of Historic Places, and is now the Old Spaghetti Factory restaurant.  UP tracks that paralleled the Santa Fe line southwards to Anaheim, passing south of the current train station and through what is now Union Pacific Park, were abandoned in the 1990s. Most of this original UP track between Fullerton and Anaheim has since been removed. 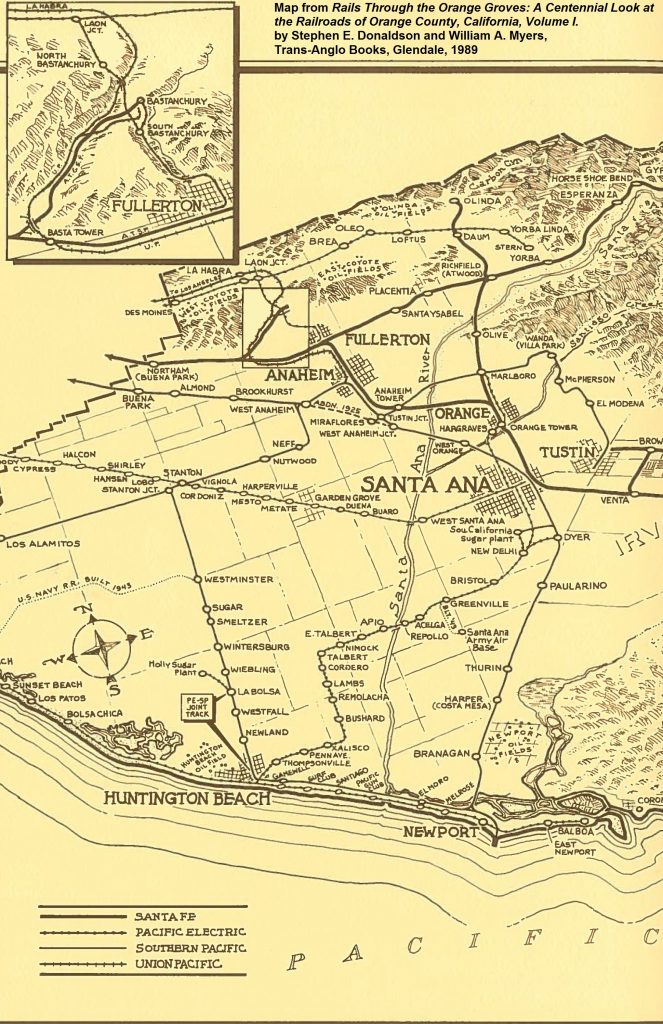 Railroads of northern Orange County, circa May 1928, about the time period of peak track mileage in the county.

Around what is now known as the Fullerton Transportation Center, one can visit the original depot buildings of all three railroads which came to Fullerton: the Santa Fe (continuing as the city’s train station), Pacific Electric (Hopscotch Tavern) and Union Pacific (Old Spaghetti Factory).

Today, the three east-west tracks through Fullerton station are owned by the Santa Fe Railway’s successor, the Burlington Northern Santa Fe (BNSF) Railway, and shared by passenger (up to 52 trains per day, including both directions) and freight (roughly 50 to 80 trains per day).  The Surf Line tracks heading south from Fullerton towards San Diego are now owned by the Orange County Transportation Authority (OCTA), typically carrying dozens of passenger trains and several freight trains each day. Next to the train station, OCTA’s bus station offers local transit connections to six OCTA bus routes.

Fullerton is located at a strategic location on the Southern California rail network, along the Los Angeles-San Diego line as well as the western end of the BNSF Southern Transcon between Los Angeles and Chicago.

The university city of 140,000 is roughly situated at the population center of the Southern California mega-region. More than 15 million people live within 50 miles of the Fullerton train station.  Few cities in California are located in such a privileged location on the rail system.  Fullerton is frequently served by the Amtrak Pacific Surfliner (between Los Angeles and San Diego) as well as Metrolink’s Orange County line and 91/Perris Valley line (between Los Angeles and South Perris via Riverside).

It is thus not surprising that Fullerton boasts the busiest train station in Orange County, serving an average of about 3,000 passengers daily. Each weekday, from the city-owned Fullerton Santa Fe Depot one can board 26 trains per day to Los Angeles, 12 trains to San Diego, 5 to Riverside and the famed Amtrak Southwest Chief to Albuquerque, Kansas City, and Chicago every evening. Amtrak’s Pacific Surfliner route between San Diego and San Luis Obispo via Los Angeles, carries nearly 3 million people each year.  It is the second-busiest intercity passenger rail corridor in the nation, behind only the Northeast Corridor between Boston and Washington, D.C.  In 2018, 257,822 of those Surfliner passengers arrived or departed in Fullerton. In addition, over half a million passengers board Metrolink trains at Fullerton each year. The thousands of rail passengers passing through Fullerton each day represent thousands of cars not on the road causing traffic congestion and pollution.

Most of the dozens of BNSF freight trains passing each day through Fullerton carry shipping containers long distance between the rest of nation and the ports of LA/Long Beach, the busiest container port in North America. The 2,200-mile BNSF Southern Transcon route connects three of the busiest freight rail hubs in the U.S.:  Chicago, Kansas City and Los Angeles (via Fullerton).  One of the nation’s most vital freight rail corridors, the BNSF tracks through Fullerton carry a not-insignificant fraction of the nation’s trade with Asia.  Trains with steel wheels are a far more energy efficient way to move freight than with trucks with rubber tires. Shipping a container by double-stacked train results in less than a quarter of the diesel fuel consumed and air pollution emitted compared shipping it by truck. A typical double-stacked container train keeps over 200 trucks off the road.

Future improvements to both passenger and freight rail infrastructure, for more frequent and reliable service, is essential for a prosperous and sustainable future for the region.  Fullerton was born as a railroad town, and will always be one.

The author would like to thank Harold Benash, President of the Southern California Rail Plaza Association/Fullerton Train Museum (www.fullertontrainmuseum.org ), and Elrond Lawrence – Executive Director of the Los Angeles Railroad Heritage Foundation (www.larhf.org ), for their historical review of the drafts of this article.

Stephen E. Donaldson and William A. Myers, Rails Through the Orange Groves: A Centennial Look at the Railroads of Orange County, California, 1989.