A Summary of the Mueller Report, Part 1: How the Russians Used Social Media to Influence the 2016 Election

The following is the first in a series of articles that will summarize the “Report on the Investigation into Russian Interference in the 2016 Presidential Election” (aka The Mueller Report). In this article, we look at the ways in which the Russians used social media to influence the 2016 presidential election.

According to the report, “The Russian government interfered in the 2016 presidential election in sweeping and systematic fashion.”

The initial FBI investigation into Russian interference in the 2016 election began in late July 2016, under the presidency of Barack Obama. Upon realizing the extent and scope of the Russian attacks, in late December 2016, the Obama administration imposed sanctions on Russia for having interfered in the election. By early 2017, several congressional committees were examining Russia’s interference in the election.

In May 2017 Special Counsel Robert S. Mueller was appointed to investigate “the Russian government’s efforts to interfere in the 2016 presidential election,” including any links or coordination between the Russian government and individuals associated with the Trump Campaign.

When assessing links between the Russian government and the Trump campaign, the report notes that the relevant legal term would be “conspiracy” not “collusion.” Mueller notes that “collusion is not a specific offense or theory of liability found in the United States Code.”

During its investigation the Office issued more than 2,800 subpoenas, executed nearly 500 search-and-seizure warrants, obtained more than 230 orders for communications, made 13 requests to foreign governments pursuant to Mutual Legal Assistance Treaties, and interviewed approximately 500 witnesses, including almost 80 before a grand jury.

Mueller’s investigation revealed that the Russian government and its affiliates interfered in the 2016 election in two main ways:

2) Second, a Russian intelligence service conducted computer-intrusion operations against entities, employees, and volunteers working on the Clinton Campaign and then released stolen documents.

The Internet Research Agency (IRA) carried out the earliest Russian interference operations identified by the Mueller investigation—a social media campaign designed to provoke and amplify political and social discord in the United States.

The IRA was based in St. Petersburg, Russia, and received funding from Russian oligarch Yevgeny Prigozhin, who is widely reported to have ties to Russian President Vladimir Putin. 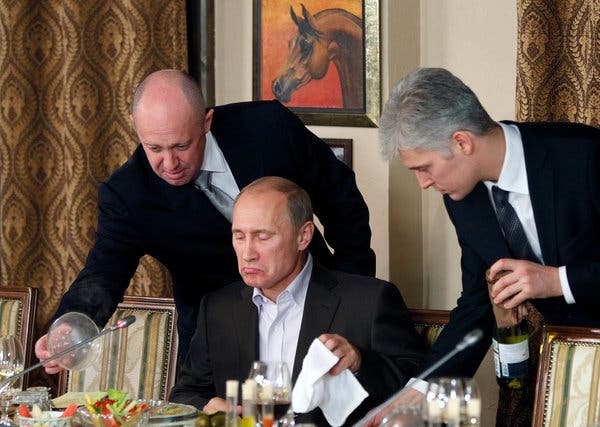 The IRA used social media accounts and interest groups to sow discord in the U.S. political system through what it termed “information warfare.”

The social media campaign evolved from a generalized program designed in 2014 and 2015 to undermine the U.S. electoral system, to a targeted operation that by early 2016 favored candidate Trump and disparaged candidate Clinton.

The IRA’ s operation also included the purchase of political advertisements on social media in the names of U.S. persons and entities. These social media groups and accounts, which promoted divisive U.S. political and social issues, falsely claimed to be controlled by U.S. activists. Over time, these accounts became a means to reach large U.S. audiences.

By the end of the 2016 U.S. election, the IRA had the ability to reach millions of U.S. persons through their social media accounts. Multiple IRA-controlled Facebook groups and Instagram accounts had hundreds of thousands of U.S. participants.

In certain cases, the IRA created accounts that mimicked real U.S. organizations. For example, one IRA-controlled Twitter account, @TEN_GOP, purported to be connected to the Tennessee Republican Party. More commonly, the IRA created accounts in the names of fictitious U.S. organizations and grassroots groups and used these accounts to pose as anti-immigration groups, Tea Party activists, Black Lives Matter protestors, and other U.S. social and political activists.

The IRA purchased dozens of advertisements supporting the Trump Campaign, predominantly through the Facebook groups “Being Patriotic,” “Stop All Invaders,” and “Secured Borders.” Here are a few examples of Facebook ads purchased by the IRA. You can find all of the IRA-bought Facebook ads HERE, as they have been released by Congress. 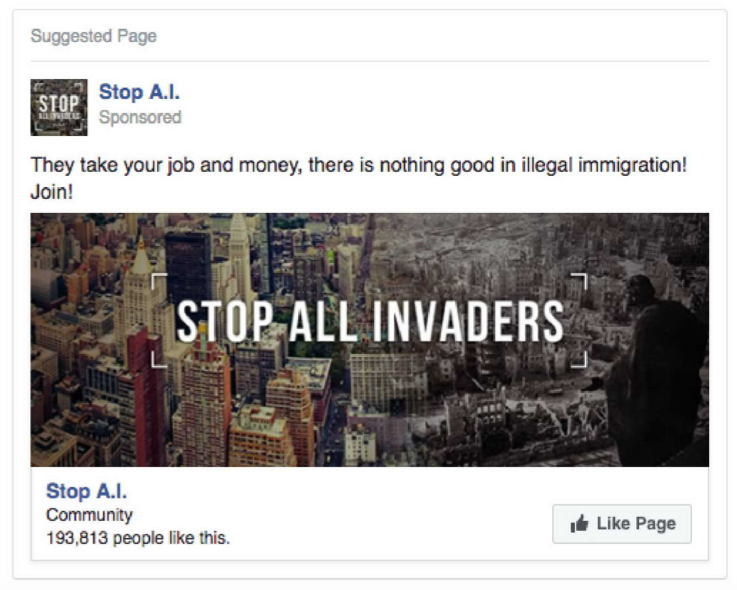 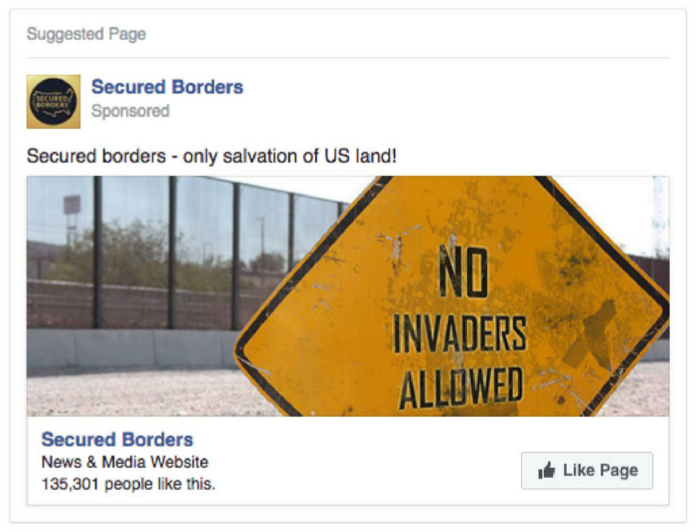 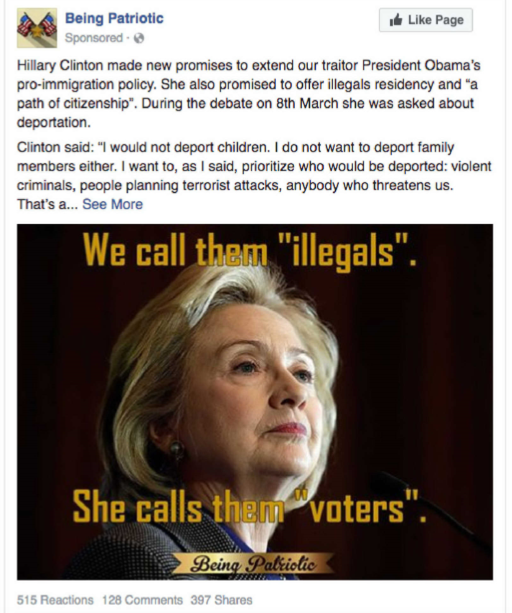 One of the more popular Russian-backed Facebook groups was called, ironically, “Being Patriotic” 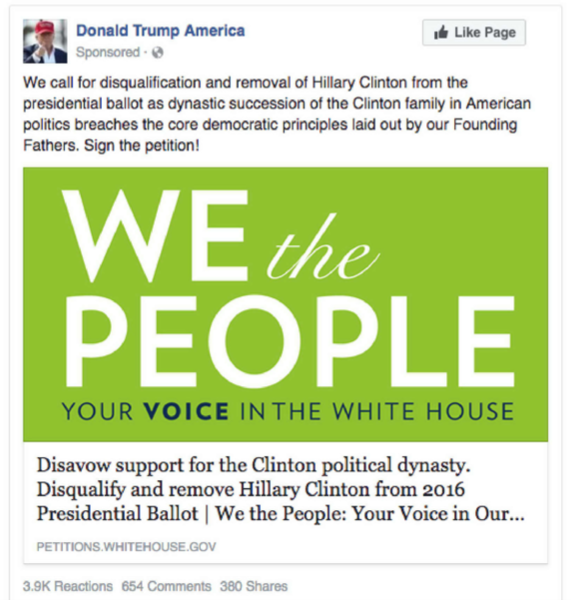 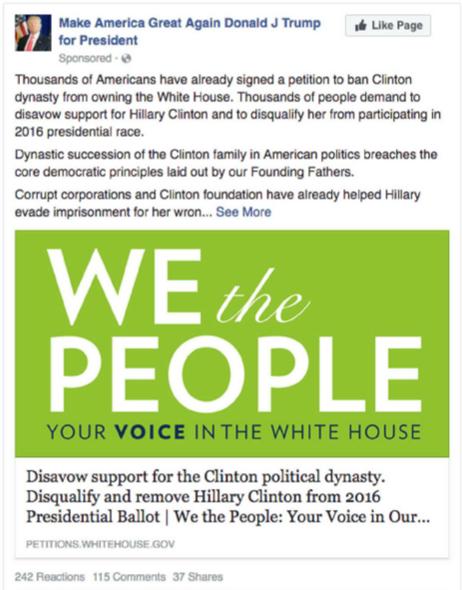 IRA-controlled accounts reached millions of Americans, according to the Mueller Report.

IRA specialists operated certain Twitter accounts posing as individual US personas. IRA operated a network of automated Twitter accounts (commonly referred to as a bot network) that enabled the IRA to amplify existing content on Twitter.

Individualized accounts used to influence the U.S. presidential election included @TEN_GOP (described previously); @jenn_abrams (claiming to be a Virginian Trump supporter with 70,000 followers); @Pamela_Moore13 (claiming to be a Texan Trump supporter with 70,000 followers); and @America:__Ist_ (an anti-immigration persona with 24,000 followers). In May 2016, the IRA created the Twitter account @march_for_trump, which promoted IRA-organized rallies in support of the Trump Campaign.

In January 2018, Twitter publicly identified 3,814 Twitter accounts associated with the IRA. According to Twitter, in the ten weeks before the 2016 U.S. presidential election , these accounts posted approximately 175,993 tweets.

The IRA organized and promoted political rallies inside the United States while posing as U.S. grassroots activists. First, the IRA used one of its preexisting social media personas (Facebook groups and Twitter accounts, for example) to announce and promote an event.

The IRA then sent a large number of direct messages to followers of its social media account asking them to attend an event. From those who responded with interest in attending, the IRA then sought a U.S. person to serve as the event’s coordinator. In most cases, the IRA would tell the U.S. person that they personally could not attend the event due to some preexisting conflict or because they were somewhere else in the United States. After the event, the IRA posted videos and photographs of the event to the IRA ‘s social media accounts.

Mueller’s investigation identified dozens of U.S. rallies organized by the IRA. The earliest evidence of a rally was a “confederate rally” in November 2015. The IRA continued to organize rallies even after the 2016 U.S. presidential election. The attendance at rallies varied. Some rallies appear to have drawn few (if any) participants while others drew hundreds. Here are some of the rallies organized by IRA-controlled accounts: 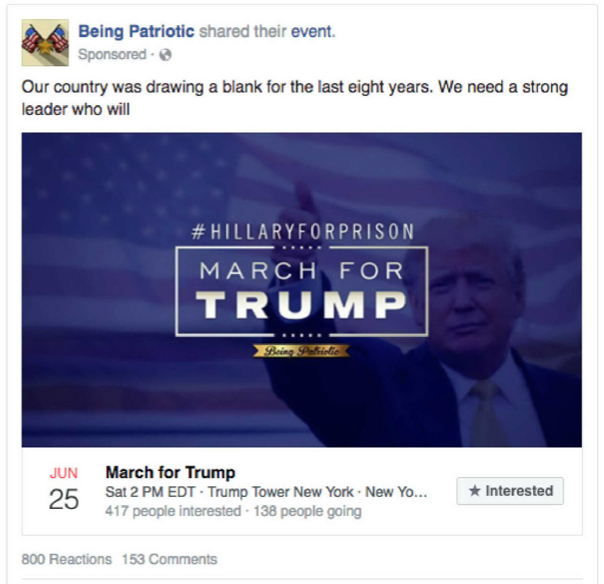 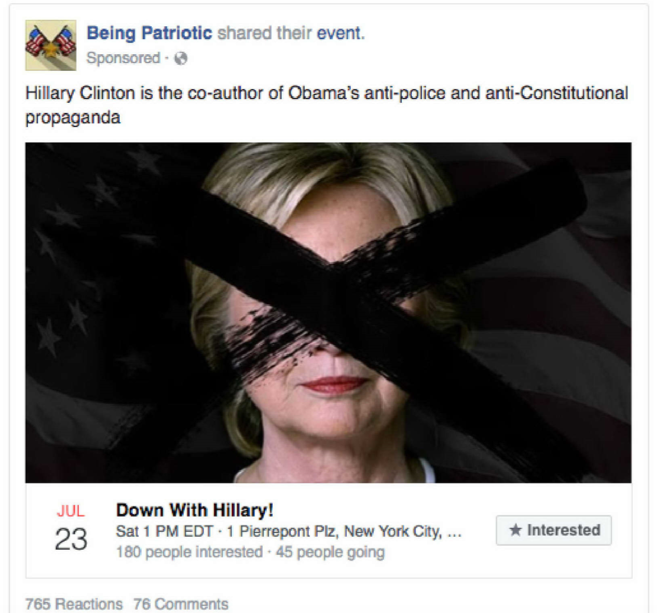 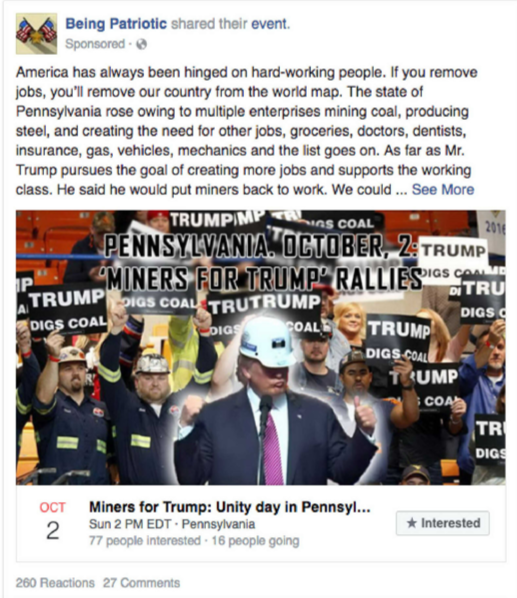 Indictments and Charging of Criminal Activity

On February 16, 2018, a federal grand jury in the District of Columbia returned an indictment charging 13 Russian nationals and three Russian entitiesincluding the IRA with violating U.S. criminal laws in order to interfere with U.S. elections and political processes.

Although members of the IRA had contact with individuals affiliated with the Trump Campaign, the indictment does not charge any Trump Campaign official or any other U.S. person with participating in the conspiracy. That is because the investigation did not identify evidence that any U.S. person who coordinated or communicated with the IRA knew that he or she was speaking with Russian nationals engaged in the criminal conspiracy.

Mueller therefore determined that such persons did not have the knowledge or criminal purpose required to charge them in the conspiracy to defraud the United States or in the separate count alleging a wire- and bank-fraud conspiracy involving the IRA and two individual Russian nationals.

Mueller did, however, charge one U.S. national for his role in supplying false or stolen bank account numbers that allowed the IRA conspirators to access U.S. online payment systems by circumventing those systems’ security features.

On February 12, 2018, Richard Pinedo pleaded guilty to identity fraud. Mueller did not establish that Pinedo was aware of the identity of the IRA members who purchased bank account numbers from him. Pinedo’s sales of account numbers enabled the IRA members to anonymously access a financial network through which they transacted with U.S. persons and companies. On October 10, 2018, Pinedo was sentenced to six months of imprisonment, to be followed by six months of home confinement, and was ordered to complete 100 hours of community service.

Stay tuned for Part 2 of this series, in which we summarize Mueller’s findings on Russian computer hacking operations!