The Power of Hip Hop: A Panel Discussion

On Sunday, June 9 The Fullerton Museum Center hosted a panel discussion entitled “The Power of Hip Hop” in conjunction with its current exhibit “Custom Beats: The Art of Hip Hop” which is on display through August 4. 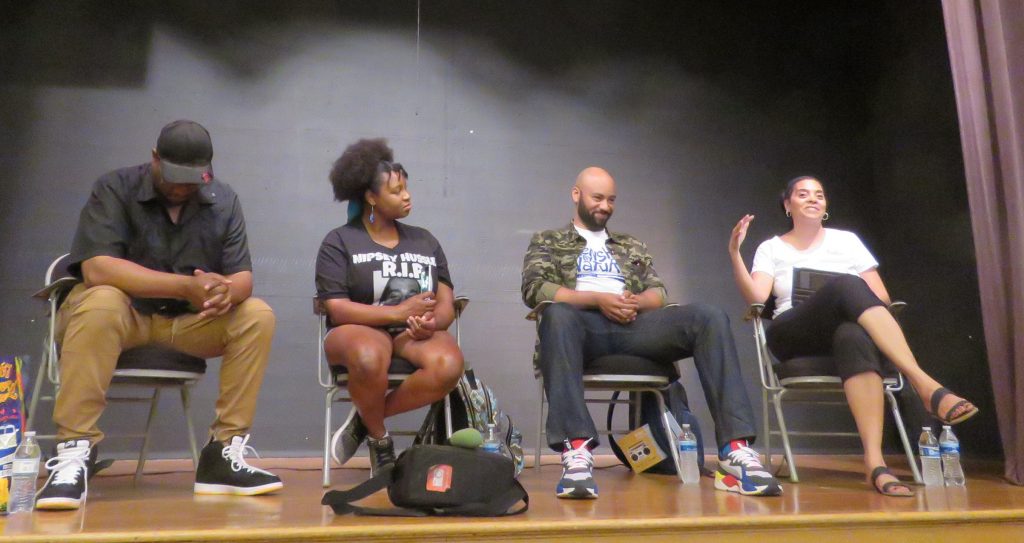 Here are the questions discussed by the panel.

How has hip hop been powerful in your personal life?

Davey D, who grew up in the Bronx in the 1970s, where hip hop was born, said that this new music “was an activity that was centered around community.” At a time and place where there was a lot of poverty and racial division, hip hop gave to him, “a sense of extreme confidence…it’s a confidence of knowing that I can create something out of nothing, that I can find a way out of no way, that I can stand up in the face of what some might feel are insurmountable odds and persevere.” 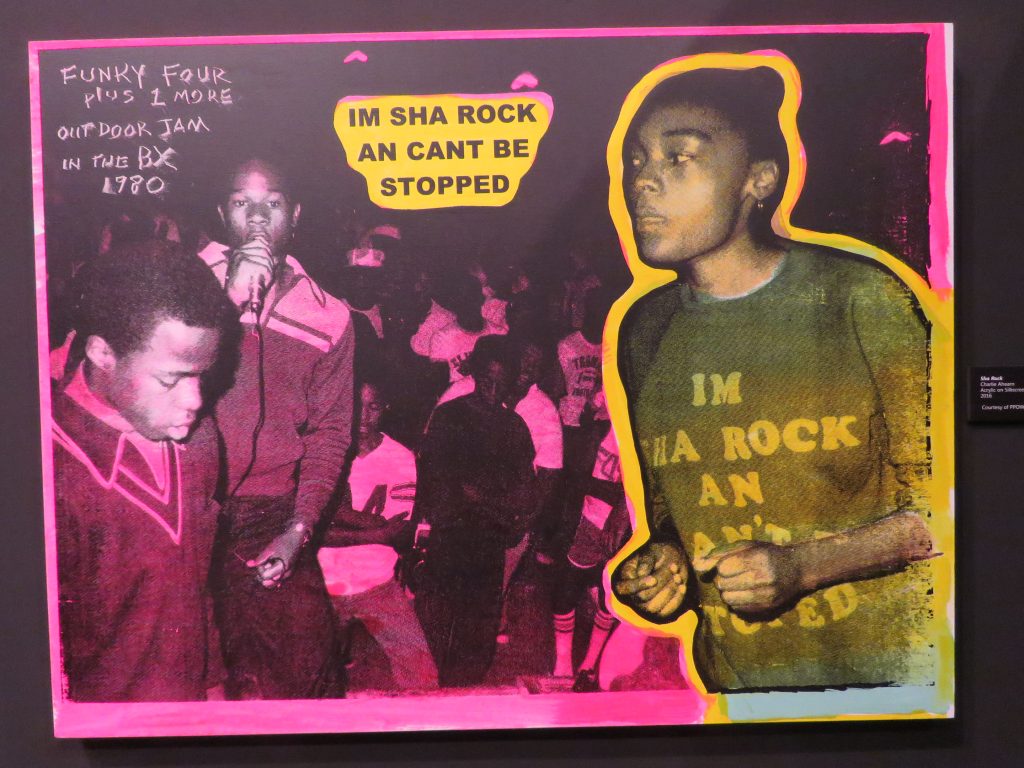 For Keyanna Celina, who grew up as a foster kid, “hip hop was a thread when I was going from foster home to foster home, that was one constant.” Queen Latifah on the radio was like a “big sister” who gave her confidence: “It’s been the blood going through my veins when I was young, I wrote poetry, and the poetry became raps, so it’s my superpower.”

“I think hip hop is the blood flowing though the veins of poor and oppressed people,” Celina said, “I have had the opportunity to travel abroad, and no matter where I have travelled, poor people listen to hip hop. It is their shield. It is their armor. It is their confidence.”

Damon Cagnolatti said that, for him, hip hop was something that unified him and his father.

“When we would go on camping trips or skiing trips, on the road, the music we listened to was Ice Cube, A Tribe Called Quest, etc,” he said.

Additionally, for Cagnolatti, hip hop was something that gave him knowledge that he didn’t learn in school. He recalled going to the famous Eso Won bookstore in South Los Angeles, which he called “a treasure of hidden knowledge.”

“I remember having a history textbook that literally said that slave masters treated their slaves with care, kindness, and compassion,” Cagnolatti said, “This was in the 90s, after the LA riots. And I remember thinking that that was problematic because of 2pac’s first album—he’s literally rapping about the history of slavery.”

In college, Cagnolatti became an English major, was able to make connections between the poetry of classics like Shakespeare and Chaucer, and the poetry of hip hop. 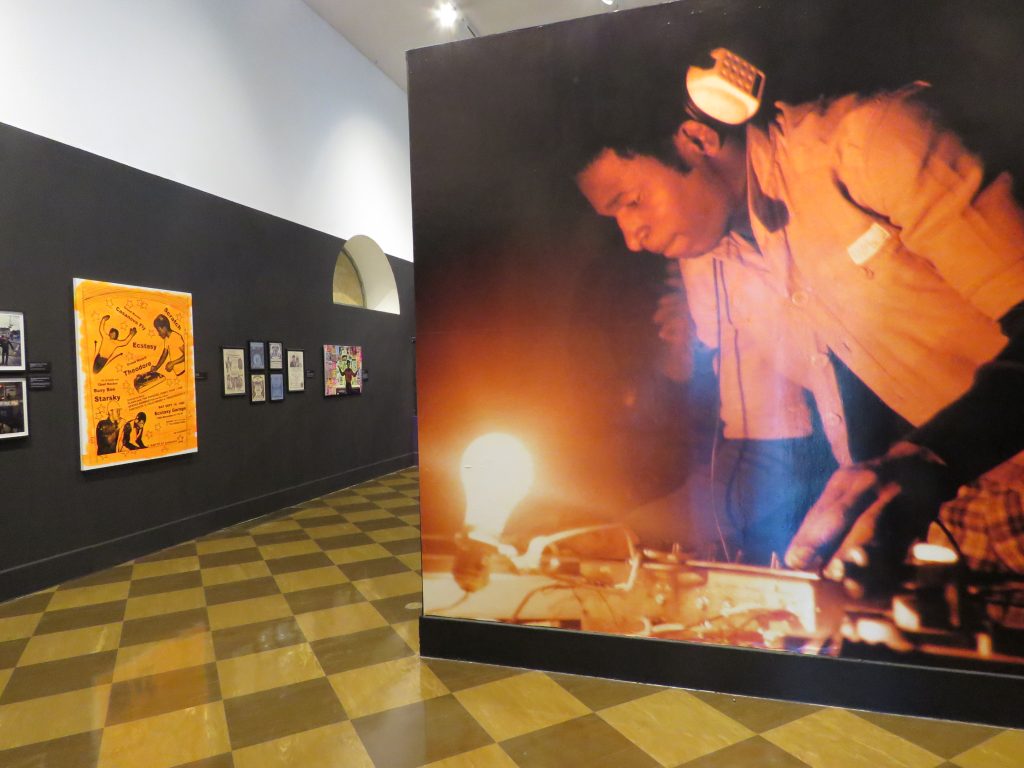 The current exhibit “Custom Beats: The Art of Hip Hop” will be on display at the Fullerton Museum Center through August 4.

Building on this notion of community and education, Davey D talked about groups that have historically filled an educational void in black communities.

He said that there was a divide between his parents, who were part of the 1960s Civil Rights movement, and his generation, that was into hip hop. While his parents generation were sometimes “embarrassed” by hip hop, some of the more radical groups of the 1970s (such as the Five Percent Nation, the Black Panthers, and The Nation of Islam) embraced hip hop as a way to reach the younger generation.

He mentioned groups like The Last Poets, the Watts Prophets, and Gil Scott-Heron, who were creating hip hop about real social issues, not just as entertainment.

In 1986, at a place called The Latin Quarter, a group of artists and activists got together to use hip hop to speak to problems facing black people at that time, such as the fight to end apartheid in South Africa, racial tension, and the crack epidemic. Out of these meetings came an intentionally in the late 1980s to infuse hip hop with a certain “Afro-centricity.”

“What I’m talking about is just people looking at their conditions and saying, ‘Something has got to change, and how can I make that a reality?’” Davey said, “There are songs dealing with racism, police brutality, knowledge of self.” 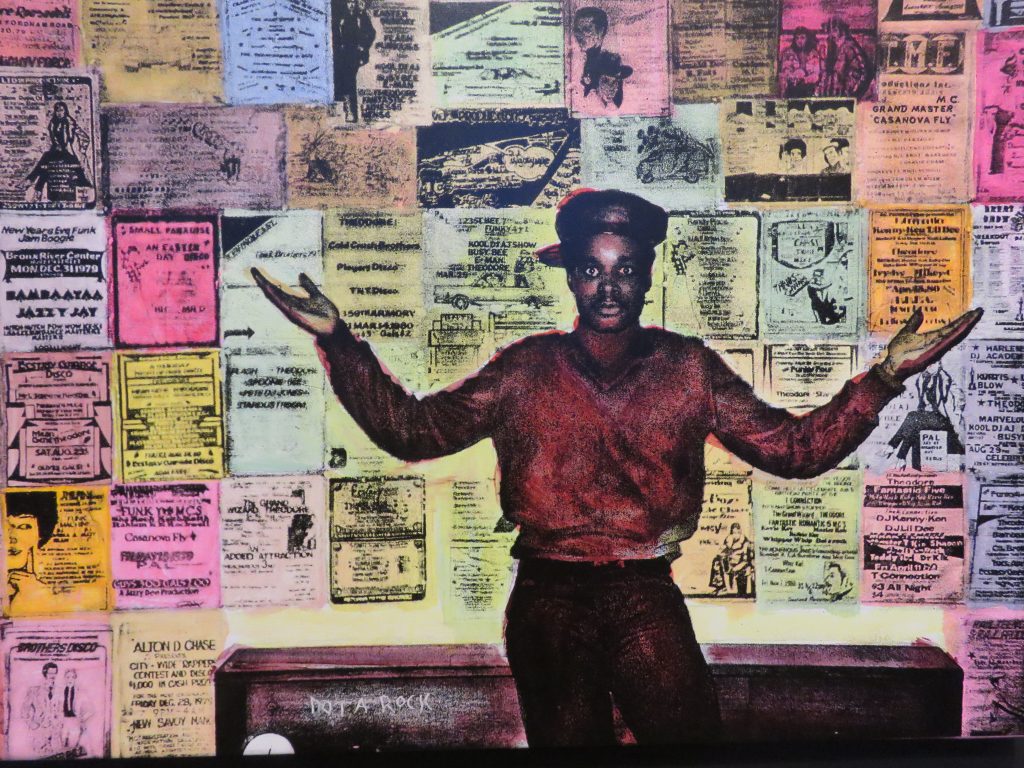 Dota Rock with Fliers by Charlie Ahearn. Acrylic on Silkscreen. 2016

What is the economic power of hip hop?

Celina talked about Nipsey Hussle, a hip hop artist who was killed earlier this year in Los Angeles, who was using the economic success of hip hop to build up an economically-independent community in his neighborhood in South Central Los Angeles.

She talked about the history of earlier efforts at black economic independence that were often thwarted by racism, such as black townships like the Black Wall Street in Tulsa, Oklahoma that were burned to the ground.

She talked about black veterans of the Civil War who were promised 40 acres and a mule for their service, who were run off their land, facing Klan terrorism, and Jim Crow laws aimed at limiting the aspirations of black economic success.

In this context of the struggle for black economic success and independence came Nipsey Hussle, who sought to unite divisions within his community (like the Crips and Bloods), and to build up black-owned business in his neighborhood. 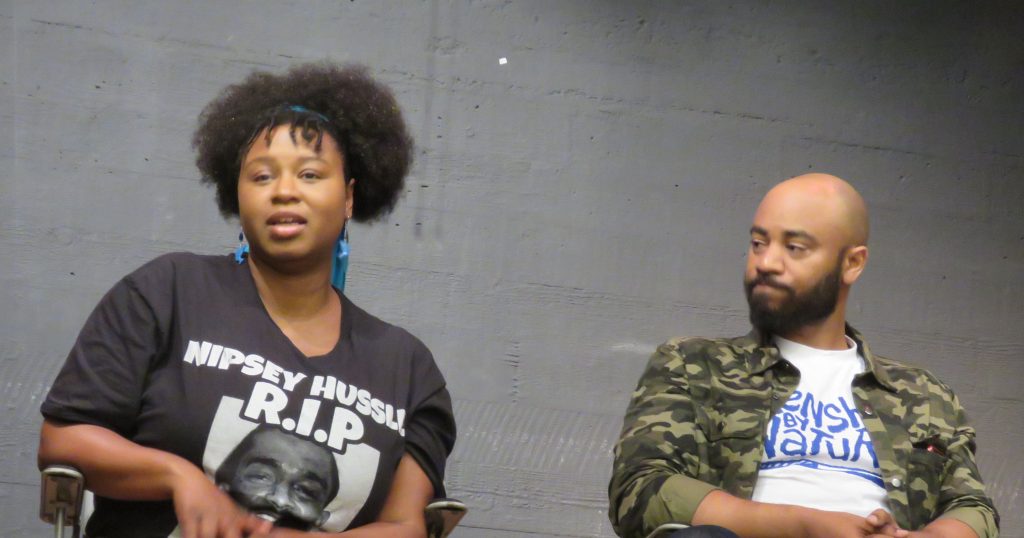 In the context of outside economic interests creating gentrification in brown and black communities in LA and across the country, Nipsey Hussle “was creating a black township—he was buying a business. That’s power. When you are able to have economic control over your lives, that’s power,” Celina said.

Hussle was employing thousands of people, and was getting ready to unfold an economic version of Black Lives Matter, when he was killed in front of his store this March.

“Nipsey was a threat because he was not down with the power structure,” Celina said, “Nipey was a grassroots brother who came up, ran his marathon, and then got himself on without having to kiss anybody’s ring or sell out.”

Professor Cagolati gave some historical context to the discussion of the economic power of hip hop and black business, placing its roots in a debate between black intellectuals Booker T. Washington and W.E.B. Du Bois.

In his Atlanta Compromise, Washington laid out an economic plan for black folks after Reconstruction. In the context of the Second Great Migration, when lots of black people were moving out of the South, as a result of the KKK and Jim Crow, Washington argued for black folks to stay in the South and start their own businesses and become more economically literate.

Du Bois responded to this in his classic book The Souls of Black Folk, by arguing for a political vision of education— black people need to not just own their own businesses, but they need to advance into the roles of leadership.

In hip hop, Cagnolatti sees the reconciliation of the views of Washington and DuBois, where you have artists like E-40 and Master P building their own independent business models.

And then Nipsey, who was influenced by the vision and philosophies of economic independence that were pioneered by Master P and E-40, which can be summed up in a phrase that Nipsey reseats: “X out the middle man,” meaning the record labels. 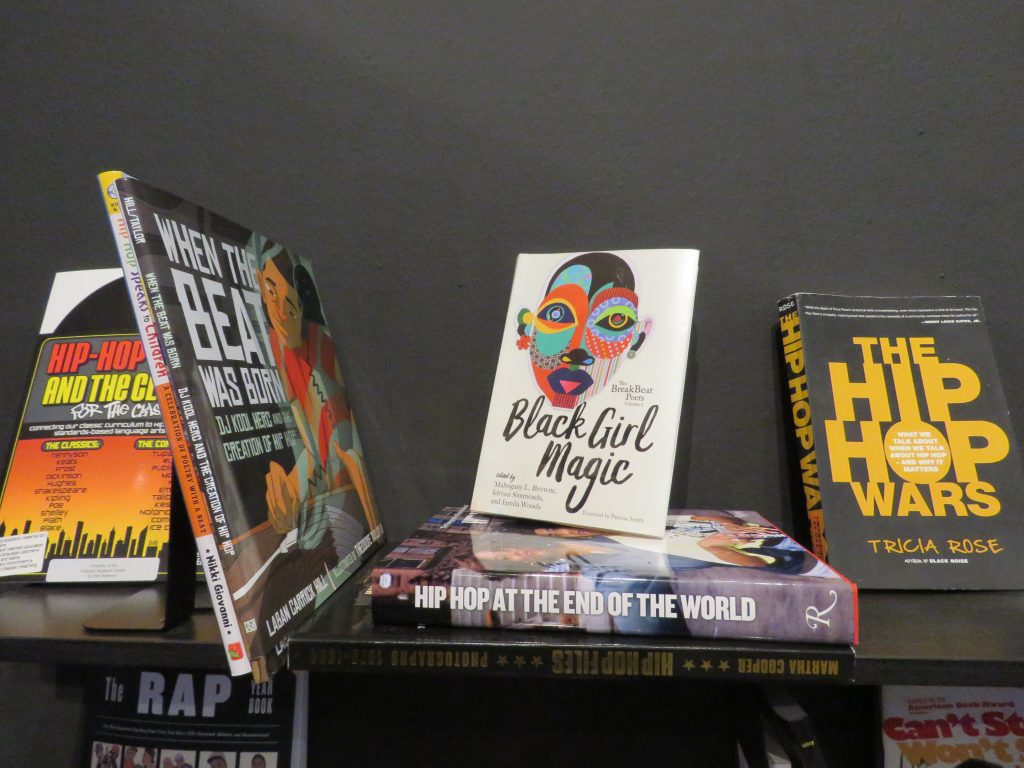 The “Custom Beats” exhibit contains some books on hip hop.

“Nipsey Hussle is embracing economic independence, on his own terms. Nipsey had a vision for all these independent black enclaves to be able to take back economic and social power…Nipsey initiates a long-term vision of success that fuses both DuBois and Washington’s economic philosophies,” Cagnolatti said.

Davey D, the historian, said that economic independence in hip hop actually traces its roots more to the movement of Marcus Garvey than DuBois and Washgington.

DuBois and Washington did not like the hip hop of their day, which was ragtime and jazz.

“When jazz was coming up, it was a raw, nasty, found in the brothel sort of thing that was capturing the attention of everybody in the country, including a lot of young white kids,” Davey said, “There was an elite black class which included Washington and Du Bois saying, ‘We don’t do that.’ Marcus Garvey was like, ‘This is who we are.’ There’s a reason why Garvey’s movement was the largest movement in the country because it embraced everybody. Hip hop is that. It comes out of that.”

“There’s a power in culture, and culture is a vibrant form of communication for a lot of people, it’s a socializing agent all around the world. And if you let the culture just go unchecked, people may rise up and rebel against things that they find oppressive. People may economically empower themselves,” Davey said. 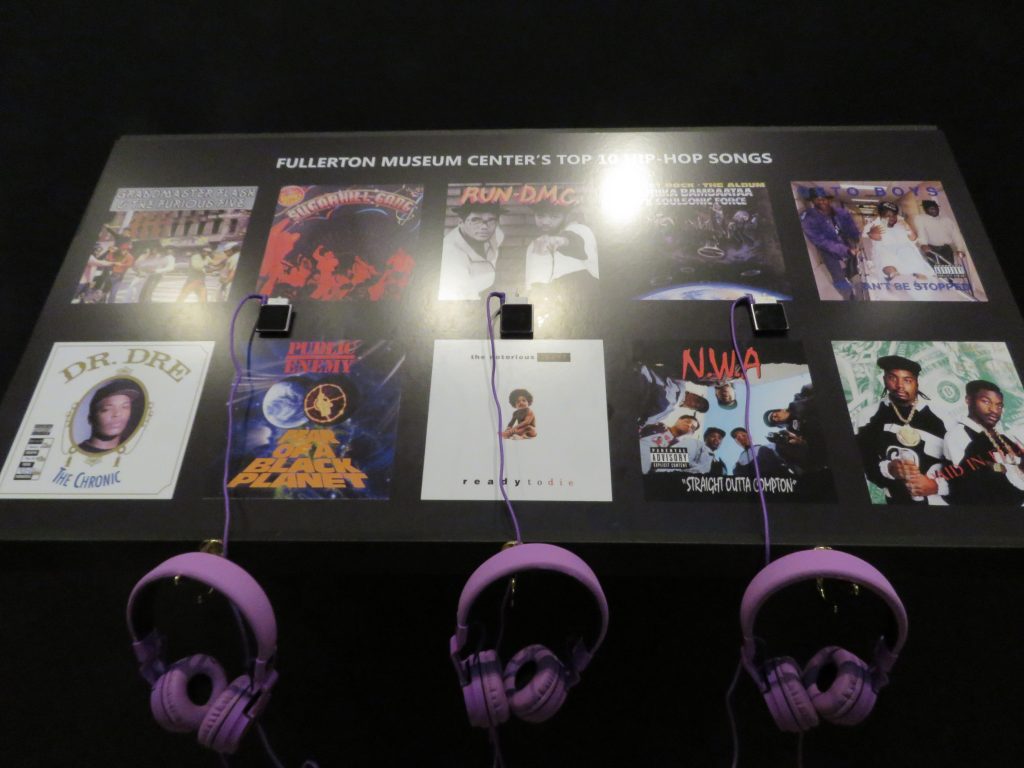 Visitors to the exhibit may listen to iconic hip hop tracks.