Gardens, Greenhouses and Growth at the FC Horticulture Department

Offering hands-on classes for homeowners, nursery and landscape employees, and students wishing to enter the “green industry,” the Horticulture Department at Fullerton College is one of the leading community college horticulture programs in California. With two acres of land filled with plants, greenhouses and irrigation equipment, the department’s facilities combine high technology with traditional landscaping and growing practices.

According to Fullerton College: A Pictorial History, WPA funds were used to build a greenhouse on the Fullerton Junior College campus in 1937. The greenhouse was used for horticulture classes. Students propagated plants used for campus landscaping, saving money for other projects. With the purchase of additional land in 1941 and 1946, the Agriculture Program was able to create a working farm on the north side of the campus. Built by FJC students, the agriculture area included a chicken house, calf and bull barns, a greenhouse, a farm shop, a sheep barn, a propagation house to shield young plant cuttings, a lath house for older plants, feed lots and pasture land.

In 1949, FJC broadened the agriculture program. In addition to learning about the raising of crops, the culture of orchards, the destruction of pests, and the rearing and breeding of animals, students were also offered a course in packing, shipping, selling, and warehouse management by a specialist trained by the California Fruit Exchange.

Today, the horticulture department offers classes that afford students valuable knowledge about all aspects of horticulture and agriculture, according to Ed Kim, a former Fullerton College student and intern who now works as a Horticulture Lab Technician with the department. “My main job here is supporting the staff with their labs, maintaining the grounds, and also overseeing the daily operations of the Horticulture Department.” Earning his Associate’s degree in Nursery Management, Ed propagated, seeded and divided a bunch of plants, which would later be sold at the department’s yearly on-campus events. “I fell in love with the professors and the classes that are here,” Ed said, “We have a permaculture set-up, a hydro set-up, and so you get the whole spectrum.” 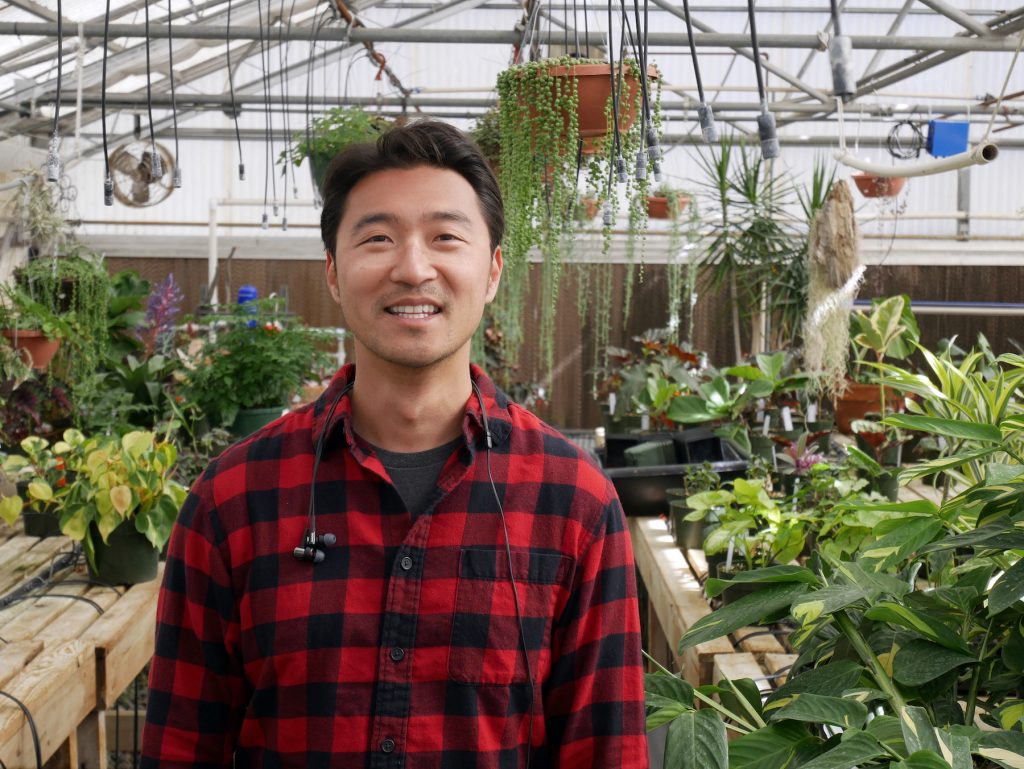 Meeting Ed on the long porch of the Horticulture Department’s administrative building, I was taken on a tour of the two-acre grounds, which included classrooms, gardens, greenhouses, and a converted World War II Army barrack. We began at the Header House at the heart of the department. “Everything kind of radiates out of here,” said Ed. “So we do our labs in here and also plant propagations and cuttings.” There were signs posted around the tables and walls warning students not to put their soil or other waste down the drains. As Ed cleaned out a coffee pot, I noticed some white containers holding seeds labeled Zamia, a drought tolerant plant with leathery leaves also referred to as the cardboard plant, which students were going to seed, propagate and then grow.

Right outside the Header House, used soil bins lined the wall across from three different greenhouses. The two mist houses are areas of relatively high humidity where plant cuttings can recover and start rooting, and where plants are misted almost every twenty minutes. The specimen house is “a room that we use to acclimate plants in a less humid environment, still getting regular water, but the plants are getting used to not being in humid conditions all the time.”

We walked back to the administrative building, where I was shown two different classrooms. One was for lecture classes, such as Principles of Horticulture. “If you just want to get your hands dirty, this is the perfect class for it. We learn how to make compost, vermicomposting, how to make worm tea, and actually plant veggies in the garden. So we propagate from seeds and also from cuttings.” The other classroom was lab space, where the soils class is taught. “You can do soil analysis. You can bring soil in from your home and then we can analyze it.”

Next, we visited the old greenhouse. Inside, besides having a good selection of house plants, shade-tolerants, succulents, and different kinds of flowers, there were also pet animals, including a horned toad named Aries and a pretty large corn snake. The greenhouse is also home to hydroponics classes. “Essentially, hydroponics is getting nutrient-water to your plants, and people have come up with clearly ingenious methods to do it,” Ed explained.

There are also aquaponics classes held in the greenhouse. Here, fish and plants work together. The students feed the fish, then in turn, the fish feed their plants. Ed pointed to two blue fish tanks. “The fish poop gets filtered out and then we have brine shrimp breaking down the particles into smaller particles.” The particles are fed into large white beds that extend almost the entire length of the greenhouse. Next, the students use deep-water culture, where plants are suspended on floating rafts with pockets that are placed in the beds filled with water. “The plants’ roots would just be sitting in the water. You might think: are the plants going to drown? No, they’re just fine because we’re adding dissolved oxygen. The roots are just happy.”

Stepping outside the greenhouse, we visited the permaculture garden, where a patch of colorful nasturtium marked the beginning of a small dirt path. Most of the plants within this garden are edible. “This is another teaching space,” explained Ed, “We use plants that are really complementary to each other.” There were also what Ed referred to as “salad trees,” on which a lot of different fruits are grafted onto one another. In fact, I saw a beautiful example of two trees from the same family in which one branch was a flavor supreme pluot and the other was a flavor king pluot.

Further into the permaculture garden, I saw some fresh cut logs that had been donated to the Horticulture Department by a former student. Within one log, there were mushroom spawn with inoculated wooden dowels that had holes drilled into them. The dowels within this particular log had been inoculated with mushroom mycelium. Once the dowels were plugged in, wax was applied to both holes and the top of the log to keep the moisture in. The stumps had already been buried six to eight inches, meaning that they’d continually have moisture from the ground, and the seed wouldn’t dry out. The mushroom mycelium would grow out and could then be eaten. “So we’ll be having more logs with different species,” said Ed as he pointed to two other logs: one with lion’s mane and the other with turkey tail.

The Horticulture Department at Fullerton College strives to provide a program of instruction as unique and varied as the students who enroll in their courses. “We want to show what’s actually happening on the commercial side,” said Ed, “so people can get hands-on experience and if they want to do this, they can see how it works.” The department’s gardens, compost piles and outdoor spaces benefit the bugs and the birds of southern California, while their programs provide gardeners with unique plants, herbs, and vegetables.

For a behind the scenes tour of the Fullerton College Horticulture Department, check out my video by visiting the Observer website and click the tab labeled “Local.” Underneath that tab, click on “Emerson Little YouTube Channel,” which should take you directly to my page.