The Asian American Pacific Islander (AAPI) held the first Democratic Presidential forum in Orange County in three decades this month. It took place at the Segerstrom Center for the Arts in Costa Mesa with over 1,000 people in attendance. While it was hopeful that more of the democratic candidates would show up, the humble gathering included US Representative Tulsi Gabbard, philanthropist Tom Steyer, and entrepreneur Andrew Yang.

The day began with an inspiring speech by US Representative Judy Chu who spoke of the Asian impact on politics as a minority that yields great power, a factor made apparent during the 2008 presidential elections, but oftentimes forgotten in the political environment. The presence of Asians in the USA and their political interests was the fundamental reason for this once in a lifetime, groundbreaking event aimed to benefit everyone alike. Due to the generosity of the AAPI, many students were also in attendance for this event without cost. The candidates who showed up had an opportunity for intimate conversation with a passionate crowd.

Supporters of Andrew Yang, the “Yang Gang” filled the front rows with their supportive shirts while listening to the usual political intentions. Moderator, Esther Lee asked Yang to further speak on his allotment plan of $1,000 per month for American citizens who have reached 18 years of age. “Believe it or not, we did this in the 1960’s and it worked. If we give this money to Americans, they will spend it on healthcare, education and consumerism. In turn, this will greatly benefit the economy and people in lower socioeconomic statuses will at least have this to fall back on” Yang clarified.

However, later a situation took place in the press room while reporters awaited their chance to interview Andrew Yang only to be met with news that Yang had “left the building” sparing no time for reporters who spent money and effort bringing equipment for the expected interview.

Reporters like Ravi Kapur, a South Asian and founder/CEO of Diya TV, expressed frustration at the “disrespect” of Yang’s verbal expressive language and seriousness on behalf of the Asian community only to be met with actions quite the opposite. Additionally, the “Yang Gang” disappeared from the stadium, leaving their empty seats behind for the remaining candidates. With Yang having left, the rest of the event belonged to Gabbard and Steyer.

Billionaire Tom Steyer used his time to talk about his family history, and money saying “my mother is the most influential person in my life. I didn’t inherit any money from my parents, I did it on my own and so I don’t really think that the amount of money I have matters when we are talking about the values that I inherited.” He also used time to talk about his intentions to impeach President Trump with his “Need to Impeach” movement which is directly opposite to Gabbard’s recent comments that “impeaching Trump will tear this country apart.”

Later, during a more personal interview with Steyer, Jodi Balma, a Political Science Professor at Fullerton College asked “will you fund your campaign forever or realize a time to quit and put that amazing energy into the programs you are so passionate about?” In response, Steyer replied with a headstrong demeanor that “there is no stopping point, there is no end to this.” Steyer has been criticized for his inability to truly connect with the average American, from his billionaire perspective. 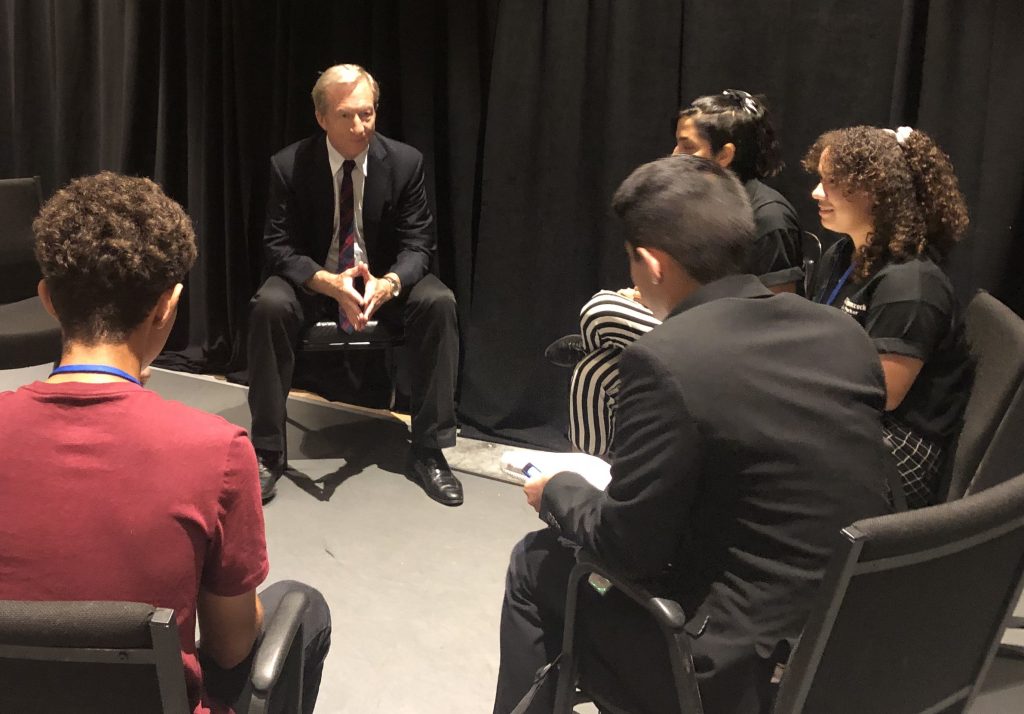 Tulsi Gabbard provided an energetic speech that lifted the crowd’s spirits. When asked why she feels she is best suited for the presidency she said, “being an army veteran, I have experienced the loyalty of a promise to die for my fellow soldiers as they have for me and that is the same promise I have for the American people. I know better how to be the Commander in Chief because I have that experience. Although I have been criticized for reaching out to foreign leaders, it is my specialty (foreign affairs) and an important characteristic that a president should have.” When asked why she accepted her invitation to the forum Gabbard spoke of the importance of the event and her sudden rise to the spotlight after her feud with US Senator and rival candidate Kamala Harris, “I am different from other candidates. Events like these are important for the community and that’s why I made it a priority to be here,” a point aimed at candidates who did not participate. The time and effort Gabbard provided to her supporters and the press was beneficial. If she was a small name before, it seems clear that she is on the path to making a much bigger name for herself, including being the star of the AAPI Presidential Forum.

It is hopeful that this event will inspire candidates to reach out more seriously to the Asian voters and recognize the political impact they have. The AAPI continues to work making voting easier for Asian community members who might face hardship understanding their ballots, but the real issue is their recognition as a powerful voting force in the political world. This event was an amazing step in that direction.

Author Kara Regan is a Fullerton college student who is soon to transfer into the University of California Irvine to complete her bachelor’s degree in psychology. She works with prisoners and detainees as a member of a prison outreach organization. Her political inspirations come from her groundwork in the criminal justice system.