Over Thanksgiving Break, a parent notified Beechwood School that she had discovered her child had participated in a private Instagram discussion with 9 other 8th grade students which had included content referencing a school shooting.

The police department investigated and determined that there was no credible threat.

Parents were notified on the following Monday after they had sent their children to school.

In order to better explain the situation and the school’s response, Beechwood principal Julie Graham and district representatives hosted a parents meeting on Monday, Dec 9. 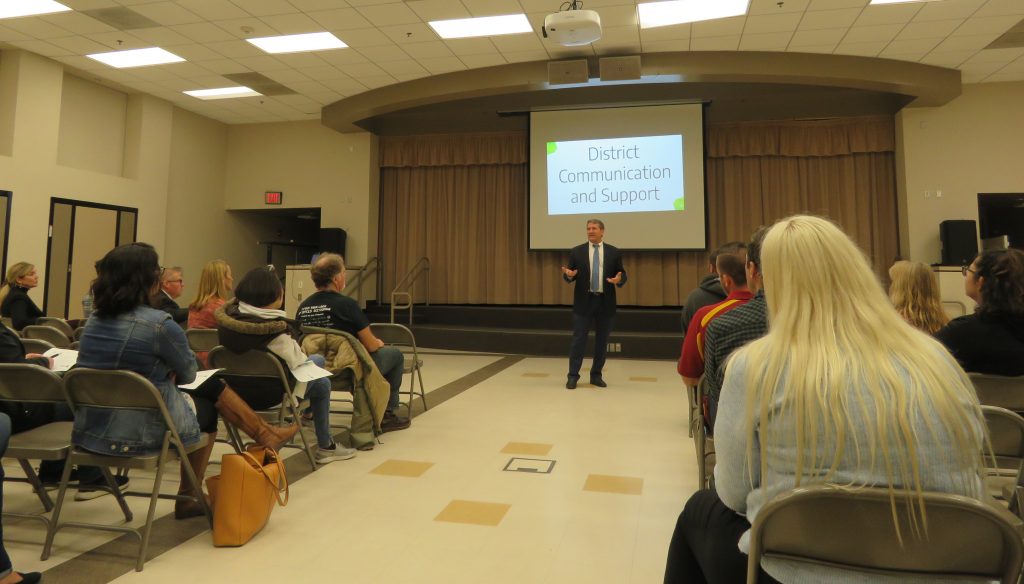 Graham explained that the 10 students had a closed social media chat that “started out very jokingly… a bunch of silly memes like turkeys crossing the road, a meme about wearing your fat pants at Thanksgiving dinner…and then a boy posted a picture of his dog and then over the dog he put stickers—sunglasses, a cigar, and a neon water pistol. And someone chimed in, ‘That’s the next school shooter.’”

“It went on from there to kids talking back and forth about the school and different areas of the school that they would go to if they were going to shoot up the school—different locations and different weapons they might bring,” Graham explained. “The weapons that are listed are all things kids don’t have access to. They’re things they see on Overwatch and Fortnite [popular video games].”

The group chat was discovered because a parent of one of the students was monitoring their child’s social media and saw it and reported it to the school.

Following this, the Fullerton police department was notified. FPD opened an investigation and went to the homes and talked to the parents and the kids. The police deemed that there was not an intentional threat, that there was no motive, and there was no access to anything they were talking about within the thread.

“When you read the thread of conversation, the tone of it is not dark and terroristic,” Graham said. “The tone of it is flippant, irreverent, highly inappropriate, but it’s not dark and stormy…you can tell that the kids thought this was funny…Mind you, these are super good kids, most of whom I’ve known since kindergarten.”

“In this day and age, you can’t take a ‘joke’ like that and not really investigate it and take it seriously. The context of our society just requires that we are vigilant and careful and that we look into this,” Graham said.

On Monday morning, school officials started their own investigation. All children involved met with four different adults: the school psychologist, the assistant principal, the school counselor, and the principal.

All students involved were given a psychological risk assessment, to determine whether they are a danger to themselves or others.

The school counselor met with the students to help them understand the significance of their actions.

As part of their discipline, each student did not attend school for 5 days while they each worked on a research project that had to do with three recent school shootings and what they learned from these.

The students then presented their research to a panel of adults, which included their parents, the principal, the school counselor, and teachers.

Additionally, the students are not allowed to have phones at school for the rest of the year.

School officials went into classrooms to share the facts of the incident with students and offered support staff, in case anyone wasn’t feeling safe.

Graham explained to the parents that, in the event that there was a credible safety issue, they will be notified immediately.

Graham stated that this incident helped her realize that the school should do a better job communicating to parents how to supervise their children online. She acknowledged that this involves a balance between privacy and safety.

She shared a few web sites and products that parents can use to manage/monitor their children’s social media, including Google family link, and Circle Plus.

Graham also explained the school’s emergency plans and procedures in case of a real threat. The school does three different types of drills: fire, earthquake, and lockdown.

On Halloween 2018, there was an actual lockdown at Beechwood School, following a stabbing in the parking lot at EV Free church. The perpetrator was moving toward Beechwood, and the police thought the person was at the school.

“We were locked down before the police ever thought the person was here,” Graham explained. “After that incident, we were commended by the FPD for how well the school responded.”

“We take this very seriously,” Pletka said. “We have very good partners with the police…They called us and they let us know that it’s not a credible threat. If it was different, if there was a credible threat, there wouldn’t have been school. That’s my commitment to you.”

“If kids are not safe and if they don’t feel safe, all of the other things that we work towards can’t happen—the learning, the ability to grow—all of those things are sacrificed,” Hammitt said. “So as soon as we had indication that there was a threat, we immediately reached out to the FPD.”

During the question and answer session, some parents felt they should have been notified earlier, before sending their students to school on Monday.

Other parents expressed gratitude regarding how the school handled the incident.