A couple of weeks ago, I wrote about Anita Shepardson’s Japanese Doll Collection at the Fullerton College Library. I was informed by a librarian, who happened to be a member of Fullerton Heritage, that Anita Shepardson’s House is now a historic landmark, located just up the street from Fullerton College on Hillcrest Drive. Her home had previously been featured on the 2015 Fullerton Heritage Home Tour. However, I was interested in learning more about Ms. Shepardson, so I decided to visit the house and talked to the current homeowner about its history.

Constructed in 1921 for $5,000, the residence at 155 Hillcrest Drive was built for widower and hardware store owner Oscar Pliny Shepardson and his daughter Anita Shepardson. According to a pamphlet from the Fullerton College Library Archives, the home was one of the earliest built in the Hillcrest Drive subdivision, which had been laid out in 1914. Like many transplants from the Midwest, the Shepardsons abandoned the more traditionally styled homes the family had constructed in Minnesota in favor of an architectural style thought to be more reflective of California’s Spanish past. Frank Keith Benchley, one of Fullerton’s earliest prominent architects, is the most likely designer and builder of this Mission Revival home. 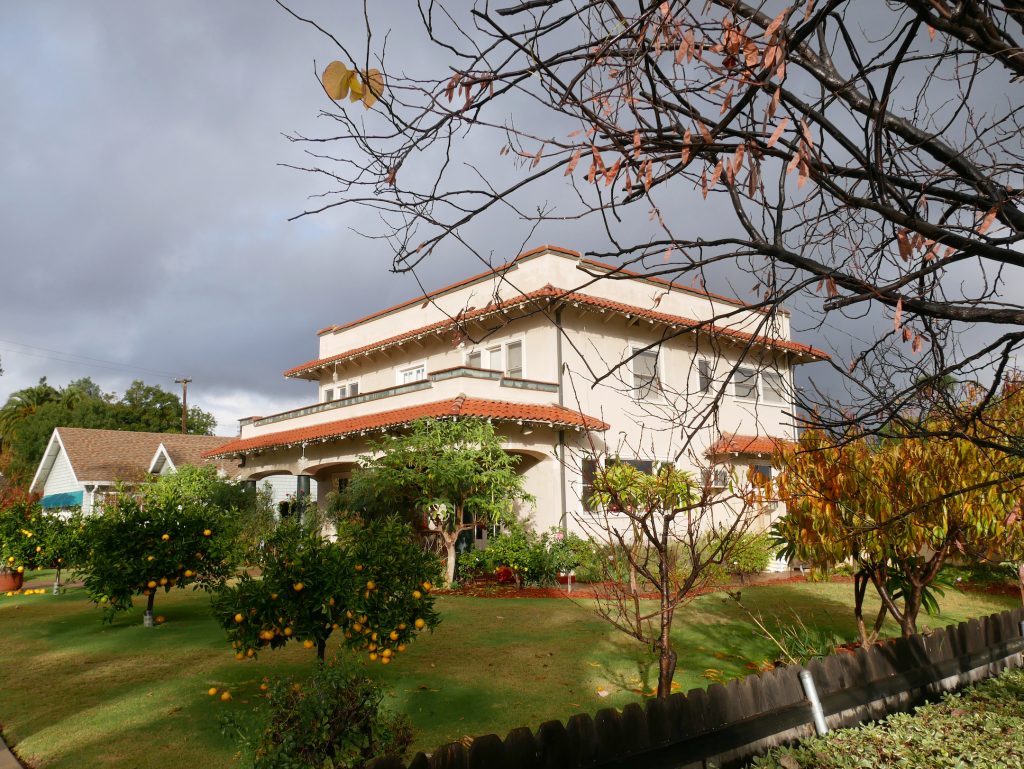 In 1906, Anita Shepardson moved from Minnesota to Palo Alto to attend Stanford University, graduating with a B.A. in history in May 1910, and a teaching degree from Los Angeles State Normal School in June 1911. The Shepardson family would join Anita in California, settling into a two-story Craftsman bungalow in south Los Angeles, and her father, Oscar, continued to work as a travelling salesman.

In a property swap, Oscar acquired the Albert G. Oswald hardware store at 104 North Spadra (now Harbor Boulevard) and announced in the September 6, 1911 issue of the Fullerton News Tribune that he was attracted to the “great promise of commercial growth in Fullerton.” The O.P. Shepardson hardware store, which specialized in high-end appliances, would later move to 134 West Commonwealth. Oscar quickly became an accepted member of the local business community and was elected president of the Fullerton Chamber of Commerce in 1914, and again in 1915.

Back in 1913, Anita was offered a teaching position with the Fullerton Union High School and Junior College Districts, where she would remain for the next thirty-three years. By 1920, Oscar and Anita were the only remaining family members living in Fullerton. The two decided to construct a home on Hillcrest Drive. Due to ill health, Oscar would retire in August 1925, and pass away three months later at the age of 73.

Anita Shepardson would live in the Hillcrest Drive residence until her death at the age of 53 in 1945.  According to the CSUF Center for Oral and Public History, in 1938, after the Santa Ana River flood, Ms. Shepardson opened her home on Hillcrest Drive to the Japanese victims. She also generously opened her home to many Japanese and Caucasian college students in need of housing.

She owned an extensive collection of Japanese woodblock prints that included works by the artists Hokusai, Hiroshige, Utamaro, Kiyonaga, Shigemasa, and many others. Many clubs on the Fullerton College campus were invited by Ms. Shepardson to observe the flower arrangement demonstrations by professional instructors like Mrs. Ken Nakazawa and Mrs. Kawaguchi. She arranged for students to hear the vocal rendering of Japanese folk songs as well as operatic arias by the well-known singer Madame Sugimachi. Many times, Ms. Shepardson invited Ms. Bando, a famous Japanese traditional dancer from the Bando dance school in Los Angeles’ Little Tokyo, to her home. Often, she served tea to guests at her house and had the Nisei students interpret classic dancing and perform other cultural arts and traditions like the tea ceremony for them.

After the outbreak of World War II, most of the over 2,000 Orange County people of Japanese ancestry were sent to the Poston War Relocation Center near Parker, Arizona. After the bombing of Pearl Harbor, Ms. Shepardson was devastated when high school and college students, many of whom she had personally recruited, were rounded up and sent to the internment camp in April 1942. Despite a weakened heart condition, she would save up her gas ration cards to make many trips to the Poston concentration camp, so she could keep in close touch with many internees.

In Japanese Eyes, American Hearth: Personal Reflections of Hawaii’s World War II Nisei Soldiers, Robert K. Sakai, who would work as a translator and interpreter for the Military Intelligence Service, recalled Ms. Shepardson arranging an engagement shower for his future bride, Sady Kitaoka, in March 1942. Ms. Shepardson then travelled to Poston with a carload of dresses, suits, and shoes from which Kitaoka could choose her wedding attire, and on the day of the wedding, she brought the couple fresh-cut flowers, a wedding cake, nuts, and candy. Sakai noted that Miss Shepardson’s “dedication and sacrifice and that of other individuals like her helped me maintain my faith in American society and the American people” (p.125).

Anita Shepardson remained in the classroom until March 1945, passing away before the end of the war on April 2, 1945, so she was never able to witness the return of the Japanese students she loved and mentored. School was dismissed early on April 5th so that teachers and students might attend her funeral. At her funeral, the Fullerton News Tribune reported that “her intense interest in people, rather than places, was brought out,” align with “her vision of the necessity for racial understanding; and her devotion to the student who came under her instruction.”

With 2,460 –square feet, the 3-bedroom, 2 and a half bathroom home faces west, sitting on a 75- by 170-foot lot. According to the Fullerton College Library Archives, after she passed away in 1945, the home was purchased by Ruth and Charles Froehlich, vice-president of Hunt Foods. The Froehlich family remained in the house until 1989. The low turnover in ownership has been a contributing factor in the preservation of the home’s historic integrity. Changes have been made to the residence, but both the exterior and interior retain a high degree of historic integrity. 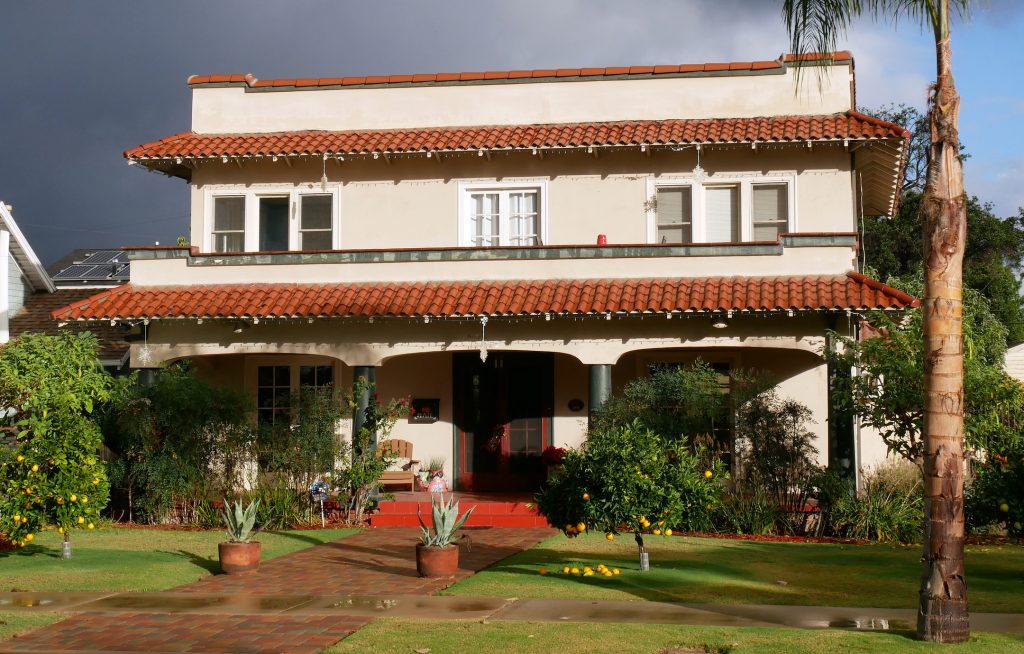 For the most part, the exterior has only been slightly altered from its initial construction and setting. In 1949, the original single-car garage at the rear of the property, accessible from an alleyway, was demolished and replaced by a wooden-sided, two-car garage and workshop. The half-bathroom on the first floor was remodeled in 1958, and a second bathroom added on the second floor. At some time, the kitchen was extended and remodeled, and a pool was added to the backyard. During the remodeling, some of the windows were removed and stuccoed over.

The original interior layout of the home also remains largely intact. Visitors entering the home are immediately led into a large, rectangular-shaped living room that features an inglenook fireplace and wooden bench seating. The fireplace is decorated with green glass tiles and brick. Public spaces – kitchen, formal dining room, living room – are located on the first floor; private spaces, including a sleeping porch, bedrooms, and bathrooms, are situated on the second floor. A half-basement is located on the northeast side of the home, accessible from a side entrance. Many of the home’s interior historic elements, especially on the first floor, remain: hardwood floors, 8-inch baseboards, arched doorways, coved ceilings, windows, and hardware. The current owners have made an intensive effort to restore and rehabilitate the dwelling, including restoration of the chimney and repair of the home’s structural support.

To see what the interior and exterior of Anita Shepardson’s home on Hillcrest Drive now looks like, visit the Observer website and click the tab labeled “Local.” Underneath that tab, click on “Emerson Little YouTube Channel,” which should take you directly to my page.