At the December 3 City Council meeting, Mayor Silva nominated Jennifer Fitzgerald to serve as Mayor in 2020, and council voted 4-1 (Whitaker “no”) to approve this appointment.

Fitzgerald then nominated Jan Flory to serve as Mayor Protem even though she was not the most senior member, she was appointed—not elected—and has said she will not run for re-election in 2020.

Of all the council members, the only one who has never served as Mayor or Mayor Protem is District 5 representative Ahmad Zahra, though no one nominated him.

Whitaker nominated himself for Mayor Protem.

After the selection process, Jesus Silva was honored for his service as Mayor in 2019.

“Mayor Silva’s passionate and ardent advocacy of solutions to homelessness locally, his advocacy with the Federal Judge who is overseeing all the homelessness cases in Orange County, is admirable,” Fitzgerald said. She presented him with a gavel and his “Mayor’s Parking” placard. 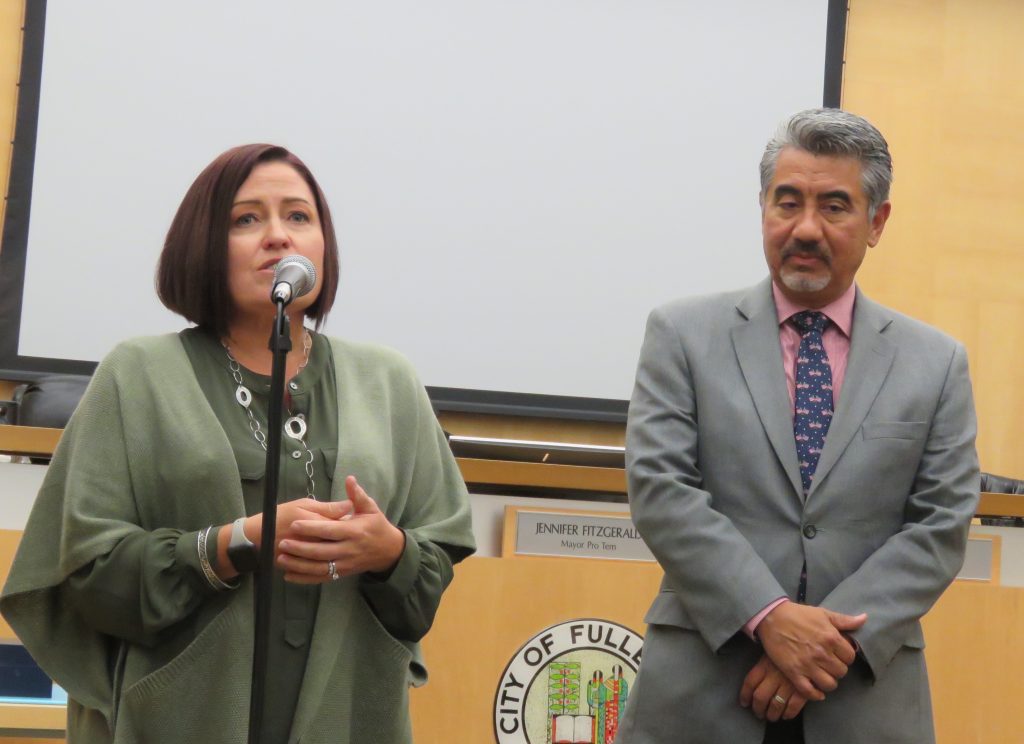 “I’ve always appreciated your sense of fairness and civility, and your successful attempts to try to elevate the tone and the nature of how we conduct business here,” Whitaker said.

Silva said that he found the experience of being a full-time teacher and also the Mayor a challenging, but rewarding experience.

His wife, Assemblymember Sharon Quirk-Silva said, “This mayor has worked tirelessly this year and given many hours on behalf of Fullerton.”

Newly-appointed Mayor Fitzgerald laid out some of her priorities for Fullerton in 2020. These include building Pearl Park, opening new trails in West Coyote Hills, finding a sustainable revenue source for improving our roads, and making downtown more of a destination.