More than a year before the #MeToo movement began, allegations of sexual harassment arose within the New York offices of Fox News and against its CEO Roger Ailes. Before that, Fox News’ Megyn Kelly (Charlize Theron), while moderating a 2015 Republican presidential candidates’ debate, challenged Donald Trump for his alleged misogyny, sparking from him the incendiary response about “blood coming from her eyes and other orifices.” At first, Ailes, seeing a rise in ratings, relished this negative interaction between a political figure he admired and Kelly, a star on Fox’s highly rated news show. 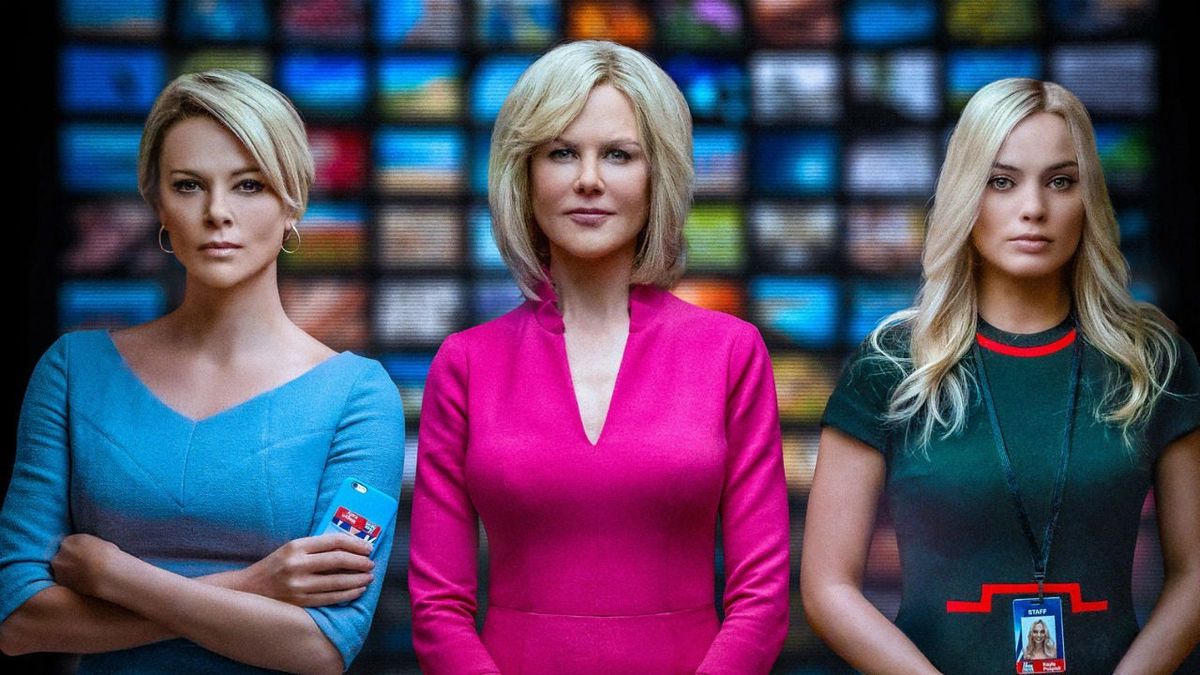 But this changes when Ailes (John Lithgow) becomes the target of a sexual harassment law suit filed by morning show co-host Gretchen Carlson (Nicole Kidman). Director Jay Roach (“Recount” and “Game Change”) is deft in dealing with tight political situations, yet he keeps “Bombshell” short of delving into the bias of the politically conservative Fox News channel. Instead, he and screenwriter Charles Randolph (co-writer for “The Big Short”) are careful to focus on the behind-the-scenes working environment within the New York Fox News Studio.

Taking us into these offices and walking us through the network studio, Kelly explains, almost as if it were a documentary, the many jobs that go into creating the content of what we see on our television screens. Nominated for an Academy Award for depicting Kelly, Charlize Theron both looks and sounds like her. Through some use of prosthetics and careful application of cosmetics, her face and body are transformed, and after working with a voice coach Theron adopted the rhythm and cadence of Kelly’s own voice.

Besides Megyn Kelly and Gretchen Carlson, a third blond and beautiful character figures in this movie, newly hired Kayla Pospisil (Margot Robbie). Kayla is not an actual person, but is a composite of several of the young hopefuls hired by Fox News. A self-described “evangelical millennial,” she has just arrived from Florida, where she was the weather announcer for a small station. Brought up in a religious family, she hopes to one day be “an influencer in the Jesus space.” However, it is through Kayla’s hiring process, that we witness the most uncomfortable scene in the movie, during which Ailes makes her lift her already short dress higher and higher until her crotch is visible.

Befriending Kayla is one of the few iconoclastic workers at Fox News. Having strong opinions but keeping them to herself, is Jess Carr, played by Kate McKinnon in her forceful and amusing SNL style. Away from the studio and in the privacy of her own home, she explains to Kayla what is expected of her at Fox News and shares with Kayla the network’s narrative formula: “Frighten, titillate. Frighten, titillate.”

With all of the good writing and splendid acting in “Bombshell,” no one outdoes John Lithgow. In real-life interviews, Lithgow always come across as a humane, normal, kind person. So it took hours of make-up and pounds of prosthetic devices to make him look at least a hundred pounds heavier. His years of willingness to act in a manner that masks the nice person he really is allows him to become the on-screen persona he depicts. We really dislike the despicable person he plays especially when we learn that Ailes received several million dollars more severance pay than his victims received by way of compensation.