With virtually no warning, the city of Fullerton closed a short block of West Wilshire Ave. to vehicular traffic, including bicycles, to facilitate a new outdoor dining area before it was allowed by California’s emergency COVID-19 orders. Signs and barricades closed the street to cars, and specifically bicycles, even though the area of the closed street is a section of the City’s official Wilshire Bicycle Boulevard. A City staffer said that the closure is planned to last until November.  There is no indication that the City’s Active Transportation Committee, which has not met since February, was consulted about the street closure. 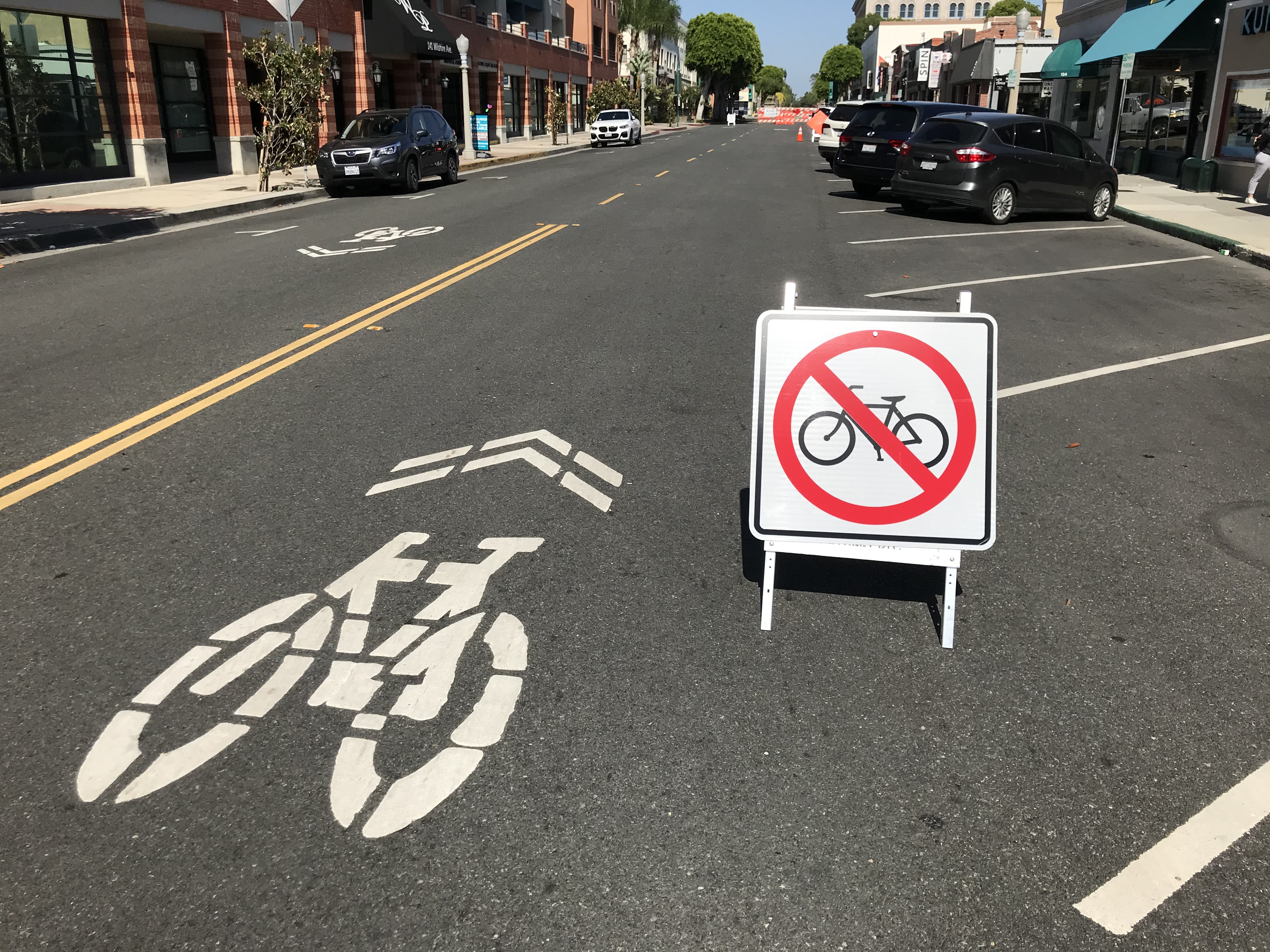 A section of Wilshire Ave. downtown along Fullerton’s Bicycle Boulevard has been closed to bicycles.

A single orange directional detour sign is posted on either side of Harbor Blvd., indicating to bicyclists to take another route, but no other signs show what that route is supposed to be. The sign facing east on Wilshire is evidently supposed to direct cyclists to make a left turn at the signal onto busy Harbor Blvd. itself, a more dangerous route for many cyclists. 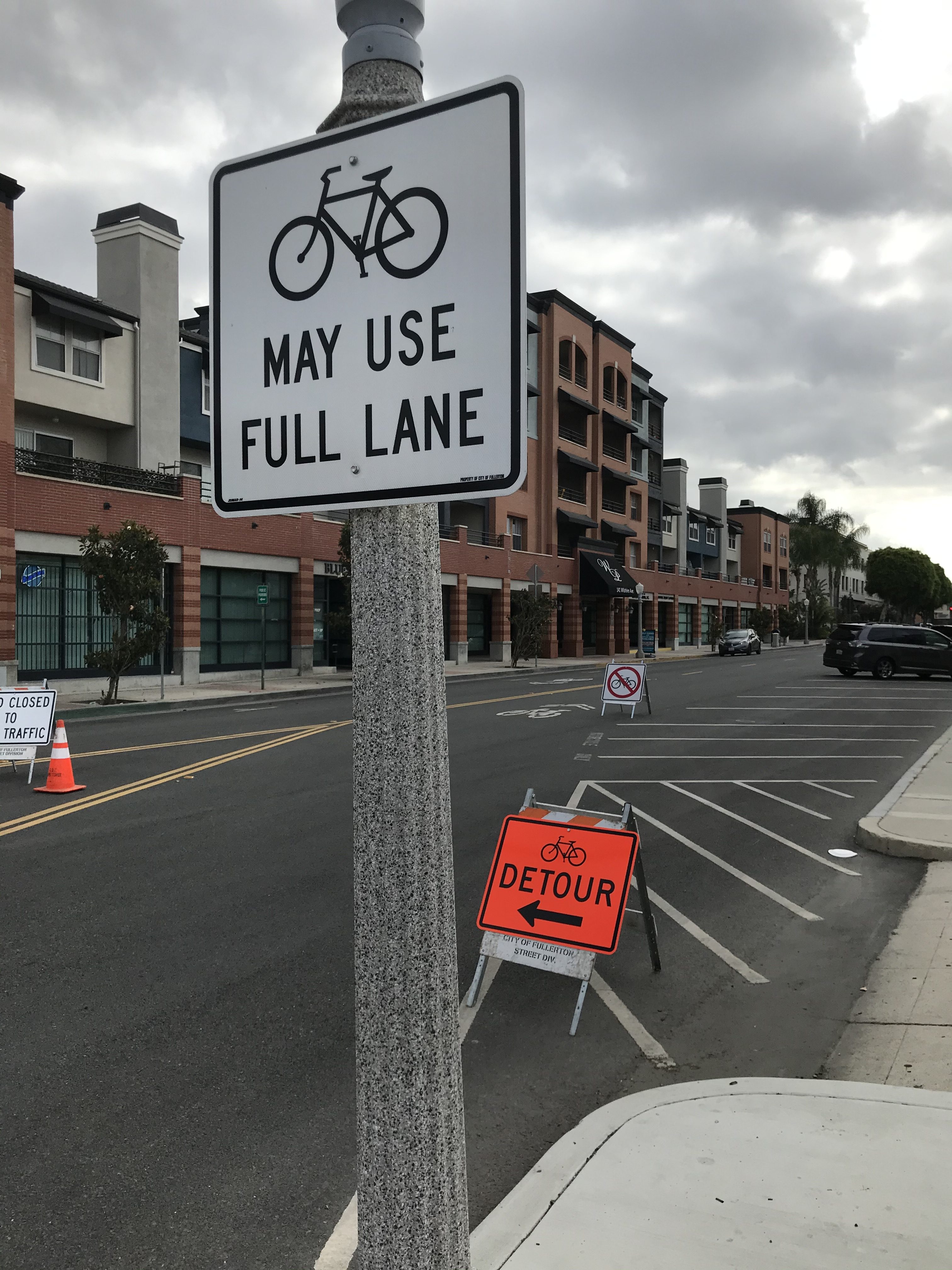 Signs were posted directing cyclists to detour around a section of the Bicycle Boulevard.

In response to concerns about the closure, Public Works Director Meg McWade wrote, “The intent of the closure is not to hurt the bicycling community.  We are trying to work as quickly as possible to help save the downtown businesses due to COVID impacts and closing Wilshire quickly is an attempt to do so.  We have identified the bike detour route, but unfortunately the signs did not arrive yet.  We are hopeful that they will be available by mid-week.  They will be posted as soon as we receive them.” After consulting a map, another City staff member suggested that cyclists use Pomona Ave. east of Harbor, but that isn’t where the detour sign is located. The City evidently plans to leave the signs where they are through the [Memorial Day] weekend and into the following week.

The Wilshire Bicycle Boulevard begins at the 600 block of West Wilshire, at Woods Ave. east of Euclid Ave., and extends east over two miles to Annin Ave., just west of Acacia, and is a central feature of Fullerton’s Bicycle Master Plan. It connects to other streets officially designated as bike routes, providing safer bicycle passage laterally across most of the City without riders having to use major traffic thoroughfares.

The $3.2 million boulevard project was years in planning, and was funded primarily with a federal grant through the Orange County Transportation Agency (OCTA), with just $300,000 from the city of Fullerton for street paving along the route. Fullerton’s closure of even a small portion of the street calls into question whether the City could be accused of misusing the funds awarded to it by OCTA grant. The grant paid for planning for the boulevard, as well as the replacement of intersection stop signs with permanent traffic roundabouts, the addition of directional bicycle “sharrow” markings to the street pavement, and the posting of permanent signs advising that bicycles may use full traffic lanes on the two-lane street. 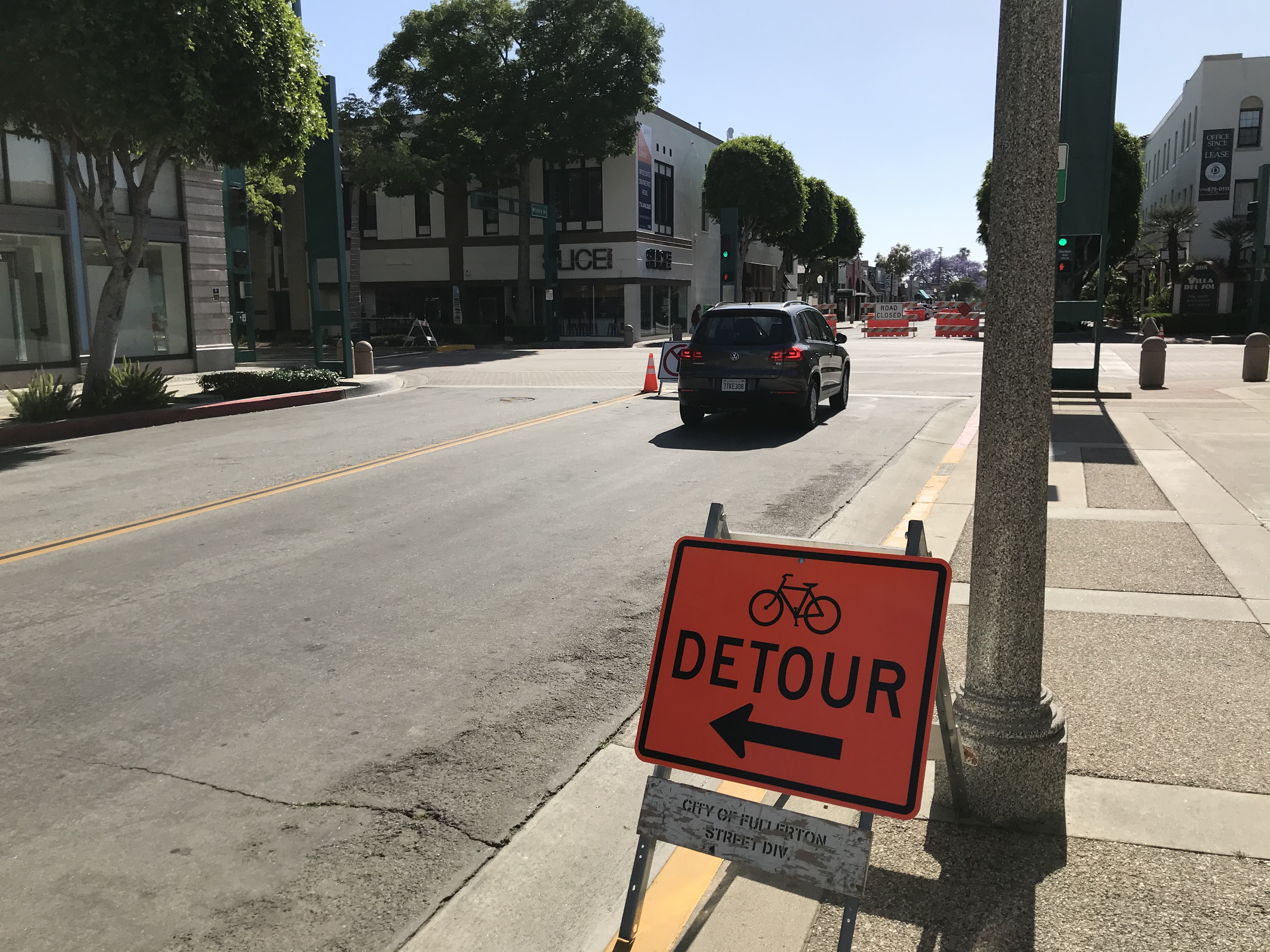 A detour sign directing cyclists onto the high-traffic Harbor Blvd. which does not have bike lanes.

Under ordinary circumstances, the entire block of East Wilshire between Harbor Blvd. and Pomona Ave. is closed to traffic nearly all Thursday evenings between the months of April and November for the Downtown Fullerton Market, but even then cyclists can walk their bikes through the market, and there is frequently bicycle parking provided near the Fullerton Museum’s beer garden, along with permanent bike racks in the area.

The closure was attributed by City staff to a desire by the Fullerton City Council for amended outdoor dining plans that would allow restaurants to utilize additional City property for expanded seating areas large enough to accommodate social distancing guidelines. Statewide orders have heretofore restricted restaurant operations to takeout only, but Gov. Newsom recently announced that California’s 58 counties could individually apply to the California Department of Public Health (CDPH) for variances, moving into an Expanded Stage 2 status that would allow counties to open up some retail businesses and restaurants if specific safety criteria could be met. Counties are required to submit variance forms that must be approved by the CDPH before a resumption of restaurant and retail activity can take place. There was a rush of applications by counties to achieve Expanded Stage 2 status by Memorial Day Weekend.

According to City staff, Orange County’s application had been submitted by Friday, May 22, and City administrators were awaiting word from Sacramento that same day so they could proceed with outdoor dining plans. That same afternoon, however, one restauranteur with frontage on the section of closed street said that a City staffer had visited his business that day and said that the City hoped to hear from the State by the morning of Saturday, May 23. But, in violation of State orders, at least one restaurant downtown was already serving several tables of customers in its regular outdoor dining patio adjacent to the empty closed-down section of Wilshire Ave. 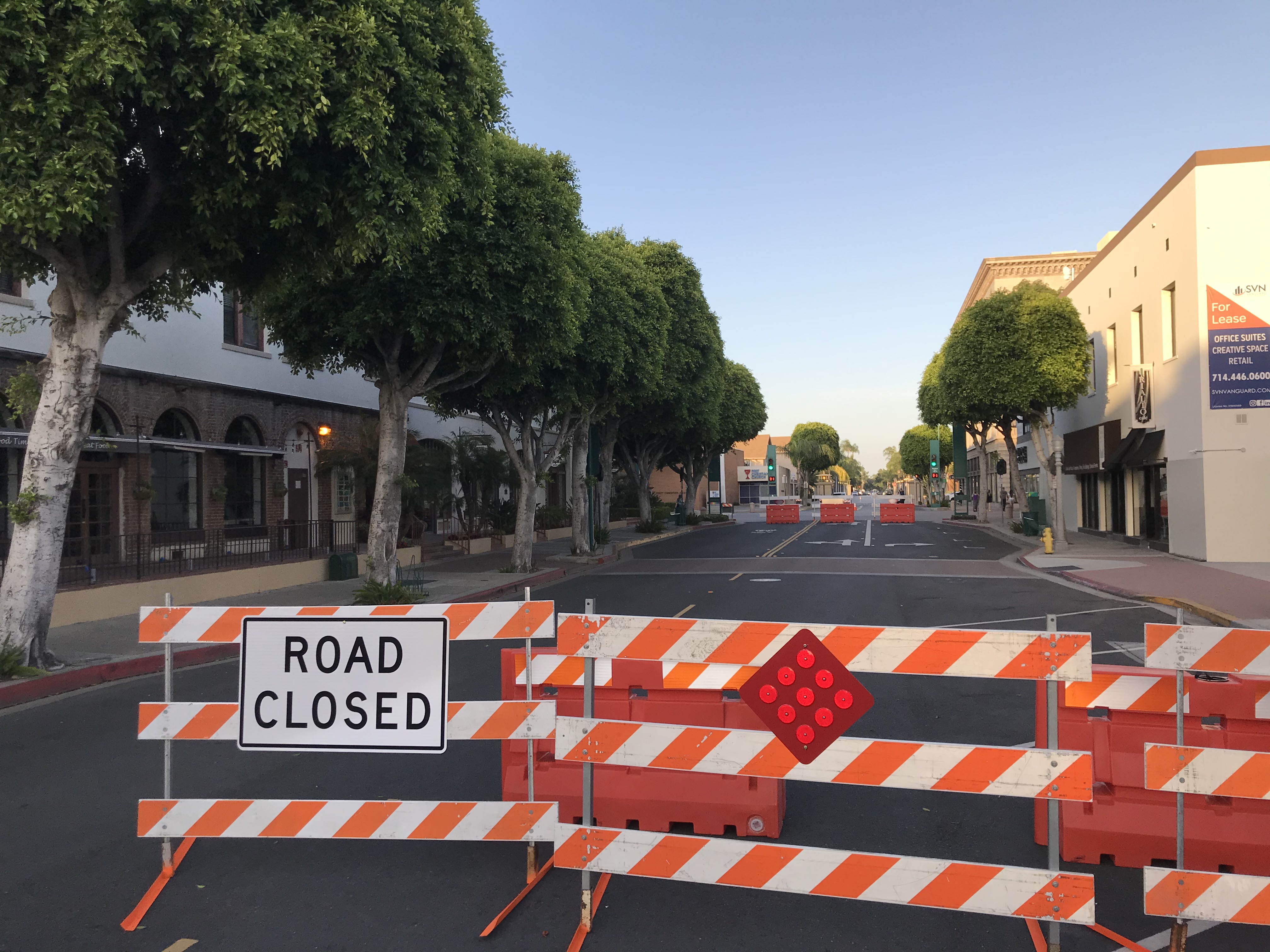 Barricades were erected across a section of Wilshire Blvd. downtown.

On Saturday morning, May 23, the county of Orange issued press releases announcing that the State had approved its Variance Assessment Plan to move into Expanded Stage 2. According to one of the County press releases, the new status allows for:

-Offices (when telework not possible)

Two restauranteurs located on the closed section of West Wilshire indicated that it would be at least a week before either of them could begin to serve customers in outdoor areas. One said that he would have to apply to the Alcoholic Beverage Control Board for a temporary license to serve outdoors and that each business had to submit an individual plan to the City for approval, as well as tape off the section of sidewalk and street it intended to use. Restaurants were only just contacted about the plans for closing off Wilshire on Wednesday, May 20. He said that his restaurant planned to use the alley just off the street instead of the street itself, and noted that it would be expensive to purchase umbrellas to shield diners from the sun during daylight hours.  None of the handful of other restaurants on the short stretch of street appeared to even be open for business Friday evening.