Fullerton City Council took the first steps on July 7 toward potentially legalizing cannabis businesses in the City, voting 3-2 to send a proposed (not finalized) ordinance to the Planning Commission for their recommendations and feedback.

In November 2016, California voters approved Proposition 64, which legalized the sale of recreational cannabis. Locally, Proposition 64 passed in Fullerton as well as at the County level 52% in favor, 48% opposed.

In 2017, the City Council passed an ordinance that prohibited the sale of recreational cannabis. However, illegal cannabis dispensaries continue to operate within the City, and are difficult and costly to legally close down.

This year, the City held 3 community educational and outreach meetings regarding cannabis. The City also conducted a community survey that showed 70% of Fullerton residents in favor of allowing cannabis dispensaries in the City. Based on this and other data, the City created a draft ordinance to allow various cannabis uses, as allowed by Prop 64.

The proposed ordinance would allow 5 retail, 5 manufacturing, 5 cultivation, 5 transportation/distribution and unlimited testing facilities in certain areas [zones] with specific regulations. These would be limited to commercial and manufacturing zones, and would have to be 600 feet from schools, daycares, youth centers, parks, playgrounds, community centers, and libraries.

Cannabis Manufacturing, Distribution/Transportation, cultivation (indoor) and testing would be permitted in the Manufacturing Park (M-P) and Manufacturing, General (M-G) zones, and would be required to be 300-feet from residential zones. 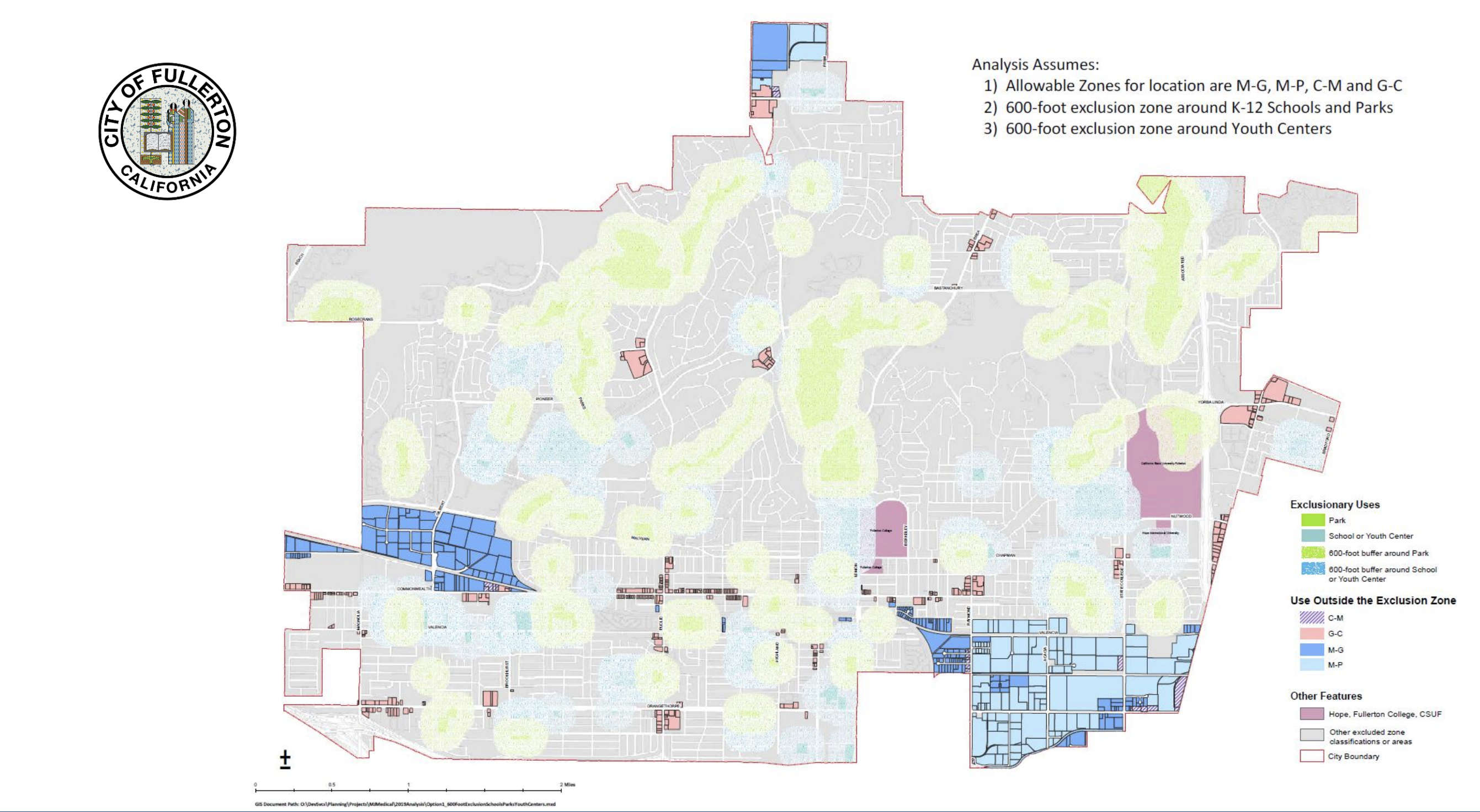 Dispensaries would primarily be limited to the blue and peach-colored zones, with restrictions.

Interested businesses would apply and be selected “through a merit-based point system tied to a set of objective standards,” according to a staff report.

During public comments, speakers were divided on the ordinance.

Some residents expressed opposition to the ordinance, citing their negative experiences with illegal dispensaries in their neighborhoods, and concern for the safety of their children.

Mayor Jennifer Fitzgerald and Councilmember Bruce Whitaker, who did not support the ordinance, said that the required 600-feet buffer zone should be increased to 1000 feet.

Silva pointed out that increasing the buffer would lead to an unequal concentration in South Fullerton, where most of the City’s industrial activities occur.

Councilmember Zahra, who supported the ordinance, said that more outreach is needed, specifically in Spanish and Korean. Many of those who spoke against the proposed ordinance were Spanish-speaking mothers from the Woodcrest and Richman Elementary School neighborhoods.

None of the previous community meetings was held in Spanish or Korean.

Flory added that she visited a dispensary in Santa Ana and was impressed by the retail operation.

“It was like an Apple store,” Flory said. “There were people from all walks of life, all ages. It was not a scary experience at all.”

Ultimately, Council voted 3-2 (Whitaker and Fitzgerald “no”) to move forward with the draft ordinance, which will next go before the Planning Commission for input and recommendations before coming back to Council for final approval at a future date.