Joe Biden and Kamala Harris won. Enjoy the moment! Dance in the streets! The feeling will not last. This will be a difficult four years. We have side-stepped an existential threat to American democracy, but that still leaves us with a broken system; a system that will not work when one side believes that its principal task is to obstruct the other side rather than look for solutions to the many crises that face the nation. 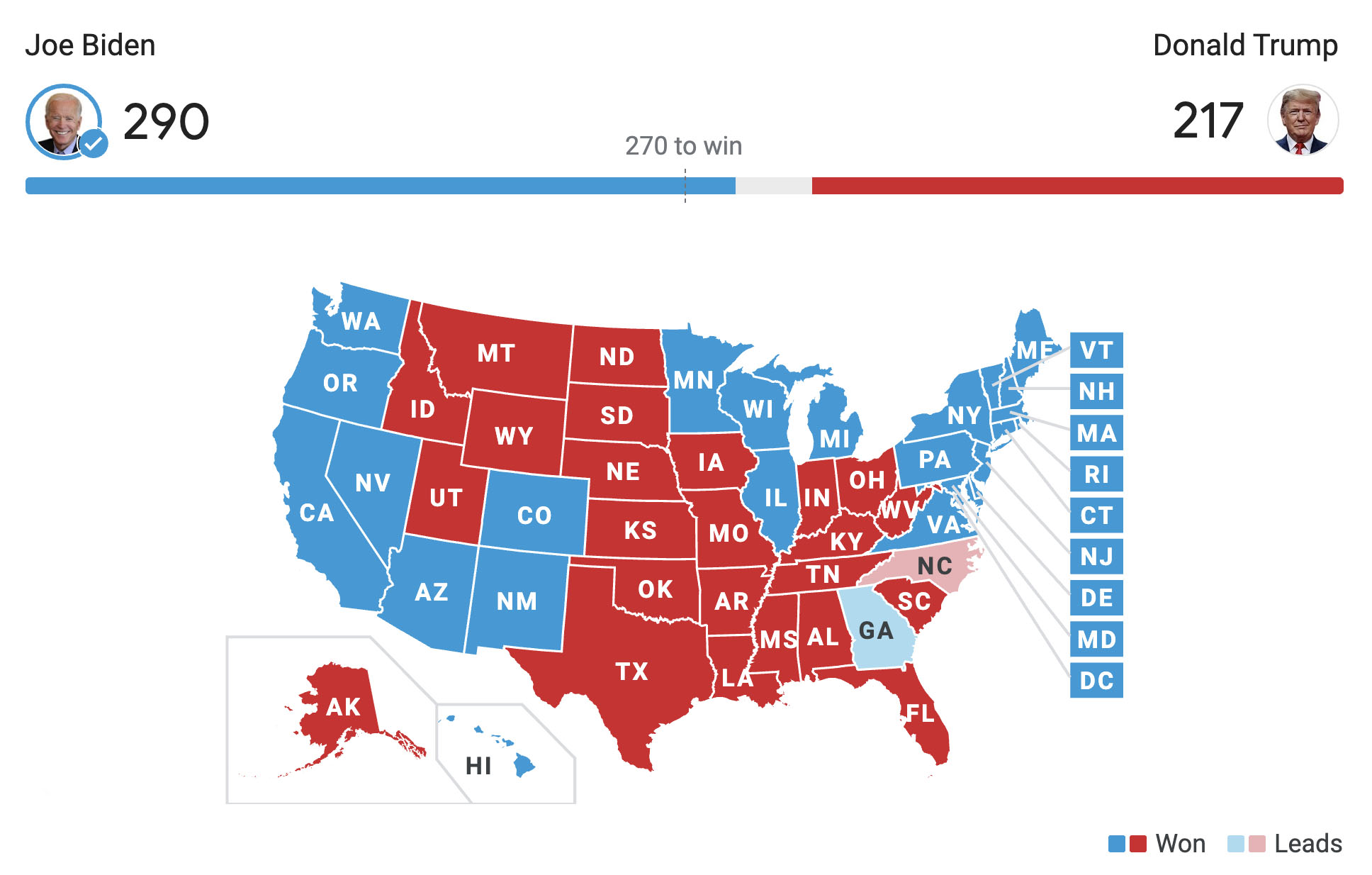 Donald Trump as president was (and is) a danger. The problems with his behavior in office are too numerous to list here, and in any case are well known. Most bothersome to me are his attempts to treat the entire government as his personal fiefdom to be used for his own personal benefit, and his willingness to ignore the norms, rules, and laws of separating politics from governing. But more than Trump, the bigger danger is that there are more than 72 million voters who believe that his behavior in office is, on balance, if not desirable, at least acceptable. And they are not going away.

They make up an agglomeration that on the whole feels left out or disrespected by the “elites,” and that those elites are changing the country in ways that threaten their way of life.  The attraction of Trump to them is multi-faceted and ranges from policy choices (e.g., prohibiting abortions) to xenophobia and racism, to the entertainment value of watching him give the middle-finger to the liberals and elites.

This in part defines the situation that President Biden and the country face in the next four years. There is every reason to believe that the right wing will oppose every action of the President at every turn. Remember how the Clintons were attacked from day one over the Whitewater affair and accused of other things including murder? Likewise, the “birthers” (including Donald Trump) attacked President Obama, and Senator McConnell said that his main job was to keep Obama from being re-elected (rather than help him solve problems). The same will happen now and has already begun by the questioning of the election results and by not acknowledging Biden’s victory. And we have not heard the end of Hunter Biden and of “socialism.” The Senate will most likely still be controlled by Senator McConnell and the Republicans who can (and will) block the president’s nominations for judges and administrative posts, as well as his policy proposals.

There was a time when partisans in Washington could socialize and work together as colleagues and friends. Joe Biden is a product of those times and perhaps he can bring about change, but I am not optimistic.

It will not be an easy four years, and then it gets worse. The 72 million Trump voters will still be around, and they will want a leader. The new “Trump” will be more focused, less insecure, less crass (but still populist) and therefore more acceptable to more voters. Biden won by fewer than 300,000 votes in battleground states in the midst of a pandemic and against a polarizing opponent.  A contest against a less Trumpy candidate and in more normal times will be more difficult.

On another level, the anticipated Blue Wave did not occur. The Democrats made no inroads on state legislatures (important for the next redistricting) and lost seats in the House of Representatives: probably 3 or 4 from California, including two from Orange County. The Blue Wave in Orange County in 2018 was something of an illusion. While all the congressional seats were won by Democrats, below that, in the State legislature and County Board of Supervisors many seats were still won by Republicans.

Orange County is definitely “purple” at the moment. Biden carried the County by nearly 10%. And while the Republicans will win back two congressional seats (Michelle Steele has already defeated Harvey Rouda in the 48th district and Young Kim is leading Gil Cisneros in the 39th), the Democrats will probably flip two State Senate districts. This includes regaining the 29th Senate district by Josh Newman, which he lost in a recall election 2018.

Next year Orange County will be represented in Washington by Democrats in four of seven House seats; and in Sacramento in four of five State Senate seats and three of seven Assembly seats. Definitely purple.

Fullerton voted for Biden. It appears that a majority voted for Trump in only seven of the seventy-plus precincts—two east of the 57 Freeway, one along western Rolling Hills, one in eastern Raymond Hills, two along Valencia Mesa and a small one on Imperial. The rest of the City was majority blue.

The City Council race brings us into a new era of district representation. Previously only Jesus Silva and Ahmad Zahra were elected by district. Now we have three more; Nick Dunlap who easily won in the solidly Republican District 2 (north central), Bruce Whitaker who is leading Aaruni Thakur in the 4th district (southwest) by about 200 votes at the time of this writing, and Fred Jung who is leading Andrew Cho in the 1st district (northwest) by over 350 votes.

The idea behind district voting was that it would make the Council more diverse, and it did accomplish that but not in the manner expected. The Council now will have members of Latino, Korean, and Middle Eastern heritage. But the two districts with the most Latinos are not represented by Latinos, and Jesus Silva (well known as a Democrat) represents a district that was carved out to be  Republican. The 4th district in which Bruce Whitaker (best characterized as representing the Tea Party philosophy) leads, has a strong Democratic registration.  Things do not always go as planned, but the days of domination by members in the Chamber of Commerce mold are past. Only Nick Dunlap comes close.

Since councilmembers only need to answer to their district constituents, if they want to gain any benefits for their districts (e.g., fewer potholes), they will have to find support from two other councilmembers – made difficult by the Brown Act. Most issues are city-wide including our financial problems and union contracts, but no one is answerable to the entire City, and the new Council will have no experience in working together as a unit. We are in for interesting times.