Driving east down Chapman Avenue past Fullerton’s city limits, it’s hard not to notice the 110-foot-tall water tower that announces Placentia as an “All American City.” The 50,000-gallon water tower, located close to the City’s downtown district, can even be seen in a passing glance if you happen to be looking in the right direction as you drive down the 57 Freeway. It is definitely noticeable, and its presence is a source of city pride for quite a few Placentia residents. I wanted to find out more about the history of the water tower, and with help from Michelle Meades, History Room Librarian at the Placentia Library District, I was able to discover how the water tower has roots in Placentia’s past. 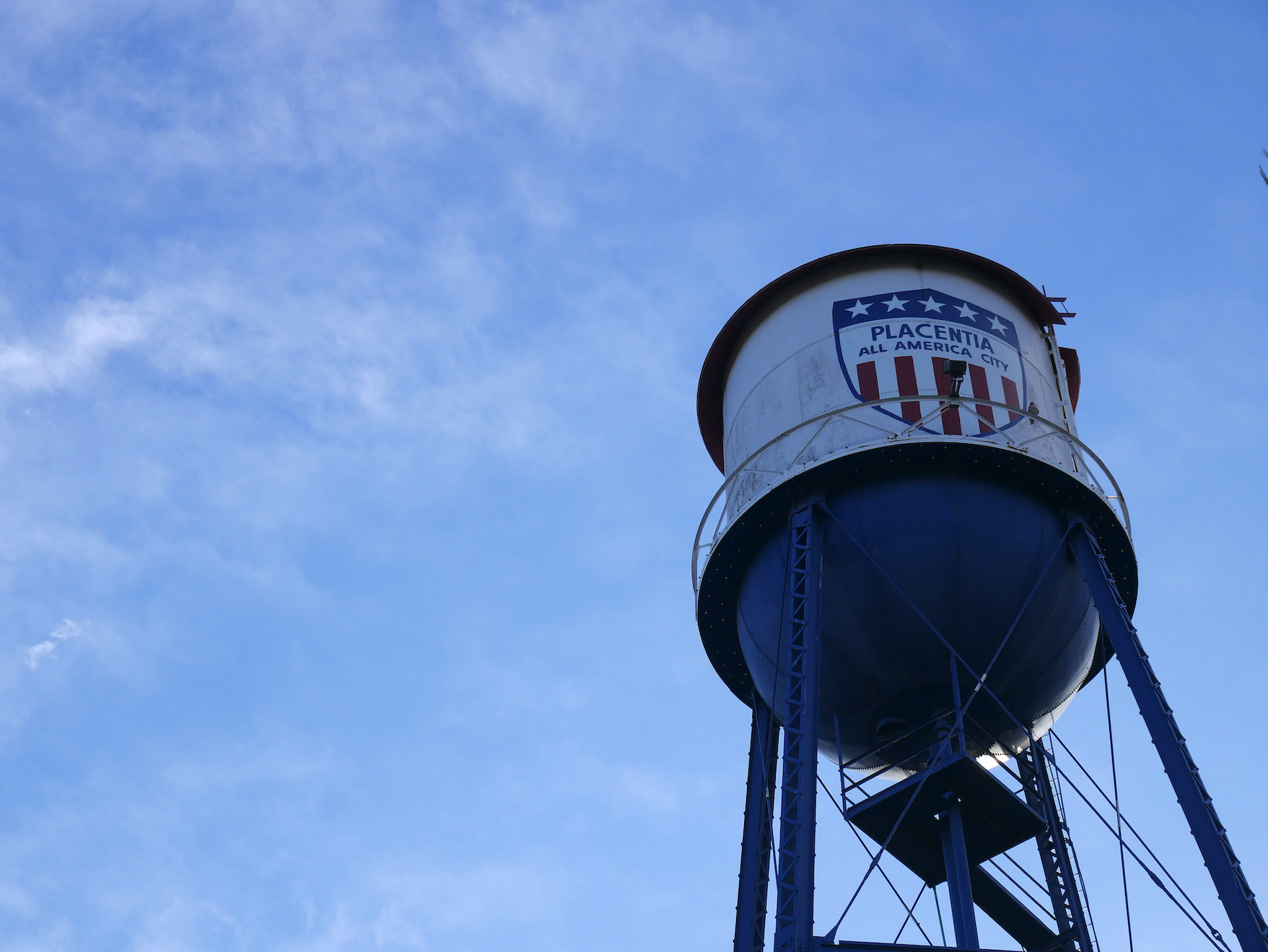 According to a 1997 Los Angeles Times article by Esther Schrader, titled “Placentia Looking Up in Quest for Landmarks,” the water tower, built in 1935, was constructed “to replace two smaller tanks, built entirely of redwood, that had been erected by a pioneering Placentia farmer named Albert Sumner Bradford. Bradford helped lay out the City’s streets, brought the railroad to Placentia and…owned a water company whose holdings were eventually bought out by Southern California Water Co. in 1929.” According to a 2013 Orange County Register article by Louis Casiano, before the tower was built in 1935, “a system of ditches supplied water for agriculture and a series of small water towers were built to get water to residents.” This water container replaced earlier towers built to serve the original townsite because it was set up on such tall stilts that it dramatically increased Placentia’s water pressure and allowed the City to grow agriculturally.

Through the Placentia Library’s History Room website, I was directed to Calisphere, a website hosted by the State Library, among other libraries and institutions in California that provides an excellent way to view digital collections from the comfort of your home. On the Calisphere website, I found five historical photos of the water tower. According to one of the photo captions provided by the Placentia Library District through the website, “the water tower was part of the Placentia Domestic Water Co. inaugurated by A.S. Bradford. Water was pumped to the tower from wells on the northwest corner of Bradford Ave. and Crowther Ave. The availability of water and the arrival of the railroad contributed to the development of the Placentia townsite.” Customers would have to visit a building at the corner of Crowther and Bradford Aves. to pay their water bills. This also happened to be the site where Placentia Well #1 was located. The well pumped water into the water tower and supplied domestic water to Placentia. Irrigation water was supplied from the Tuffree reservoir. 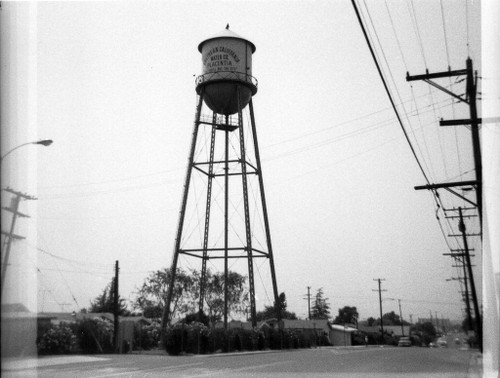 The water tower was built in 1935, replacing two smaller capacity towers serving the area south of Chapman Ave. The water tower was part of the Placentia Domestic Water Co. inaugurated by A.S. Bradford. Water was pumped to the tower from wells on the northwest corner of Bradford Ave. and Crowther Ave. The availability of water and the arrival of the railroad contributed to the development of the Placentia townsite. The water tower is designated as Placentia Landmark #10. Title: Photograph of the Placentia Water Tower. Date: 1972 Collection: Placentia Local History Photograph Collection. Owning Institution: Placentia Library District Source: Calisphere. Date of access: December 9 2020 02:12 Permalink: https://calisphere.org/item/ark:/13030/kt9489r2s1/

Since the water tower is so noticeable and so permanent in a frequently changing town, the Placentia City Council voted to declare it a historic landmark in 1991. “It’s the heritage, it’s the agricultural and growing, booming city that this tank represented—growth in the community and water to the community,” Ken Vecchiarelli with the Golden State Water Company said on KNX 1070’s News radio program On Your Corner in 2014. “The tower used to be orange and green, and I’m surmising that that might have been partially because of the citrus groves and grain community. You need the water to keep things green and growing.” The tower also provided fire protection but was drained and taken out of commission years later. 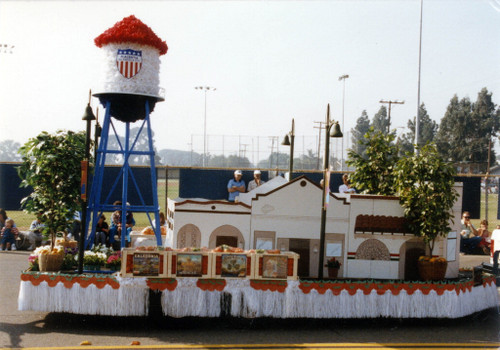 The tower is now empty and has not stored water since 1993 when Golden State Water Co. made the decision that it no longer needed elevated water storage after constructing large underground pipes that run throughout Orange County. It’s important to note that in the years following local historic landmark designation, the tower began to fall into disrepair. Its unflattering outward appearance may have been caused by oxidation from smog and weather wear. There were also plenty of pigeon droppings and grime on the tower’s slanted roof. Local teenagers also began scaling it on bets. At that time, the city of Placentia was preoccupied with trying to revitalize the businesses within its downtown area and wasn’t paying too much attention to the tower. 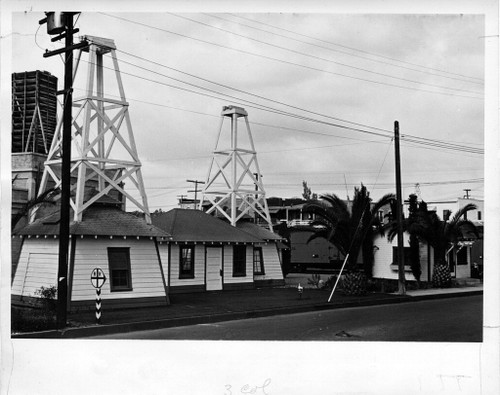 However, in 1996, water company officials decided to fix up the historic landmark. According to Esther Schrader’s 1997 Los Angeles Times article, “At a cost of $3,500, they cleaned and repainted the tower. They installed lights to illuminate it at night and a gate to keep climbers off.” In 1997, it appears that the tower finally received a long deserved local landmark plaque and ceremony.

“The tower brings back memories of the small, family ‘town’ not the large city that it has become,” said Heather Patrick, Vice Principal and piano instructor at Patrick’s Music School. “It’s located near downtown Placentia which is filled with a strong Hispanic culture. It also symbolizes the town that was once primarily orange groves and farm land.” 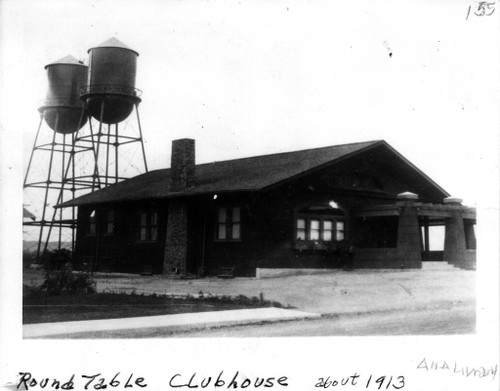 When I drove by the tower on an early morning toward the beginning of December, I found it hard not to notice the red, white, and blue shield painted on the tank itself with the words, “Placentia All America City,” a designation from the Denver-based National Civic League. In 1971, Placentia was awarded the prestigious title of “All America City,” which is given out annually by the Civic League to ten cities in the United States.

I wondered if the city of Fullerton ever had a major water tower like Placentia had, so I decided to check with the Fullerton Public Library History Room. “We must’ve had them in town, but I’d imagine they are all gone now,” said Cheri Pape, Local History Archivist at the Fullerton Public Library, via email. “They were just there, as needed, until they weren’t.” She shared with me a photograph from 1948 of a water tower located in the Northgate Heights area of Fullerton, just north of Lions Field on Brea Boulevard at Lemon. Oddly enough, there was a fake water tower added in a 1990 restoration of the historic Cusick House on Amerige.

While Fullerton may not have had a prominent historic water tower, Placentia certainly did and still does, even though it no longer contains water. So, the next time you pass by Placentia, whether it’s down Chapman or on the 57 Freeway, be sure to be on the lookout for this historic landmark.

To see historic photographs of the water tower compared to what it looks like today, please visit http://www.fullertonobserver.com and click on the tab labeled “Local.” Underneath that tab, click on “Emerson Little YouTube Channel,” which will take you directly to my page.