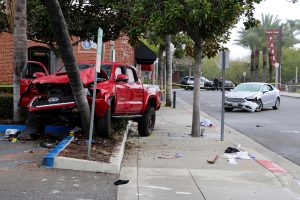 Nine pedestrians were hit by a suspected impaired driver in the area of 100 W. Santa Fe, in downtown Fullerton at 1:48am Sunday, February 10th. Fullerton PD arrived on the scene to find a Toyota Tacoma had driven up onto the sidewalk striking 9 pedestrians before hitting a tree and coming to a stop. Multiple victims were trapped underneath the car, which was smoking and had serious frontend damage.

With the help of some nearby good Samaritans officers were able to lift the Toyota enough to free those injured beneath it. Fullerton Fire immediately began life saving measures and ultimately ten victims (including the passenger of the truck), from ages 18 to 49 years old, were transported to local trauma centers with injuries ranging from moderate to life-threatening.

The driver of the Tacoma, Christopher Solis, a 22-year-old from Anaheim was arrested for felony DUI causing great bodily injury. Due to the time and location of the accident – hundreds of people were on the sidewalk.

Three other vehicles were found on the street with minor to moderate damage as well. FPD Accident Investigators are investigating to determine what happened.

Anyone with information about this incident and anyone who captured cellphone video is asked to contact the Fullerton Traffic Bureau at (714) 738-5313. Anonymous information can be called into OC Crime Stoppers at 1(855) TIP-OCCS.

The victims hit in a crash of a truck that jumped the sidewalk on W. Santa Fe in Fullerton injuring 9 – plus the passenger of the vehicle driven by 22-year-old Christopher Solis will survive though according to a Channel 7 report by Greg Lee – some injuries are serious including one young woman with a dislocated hip, broken rib and back fractures.

Also in that report is an interview with the driver’s family members who say they are praying for the victim’s recovery but that Christopher is not a monster and that he was fleeing from gang members when the collision happened. According to the driver’s brother – gang members were attacking him, they surrounded his car and tried to yank him out. He tried to take off but hit a nearby car and the airbags deployed. Then he lost control of the truck. According to his brother alhough police suspected drugs or alcohol were involved, his brother passed a field sobriety test and had not been drinking or using drugs. He said his brother is remorseful and in shock.
Results of the toxicology test to determine if Solis was driving while impaired are pending. Solis is being held on $100,000 bail and will appear in court on Wednesday Feb. 13.