SAVE THE HILL OR THEY’LL BE ILL! 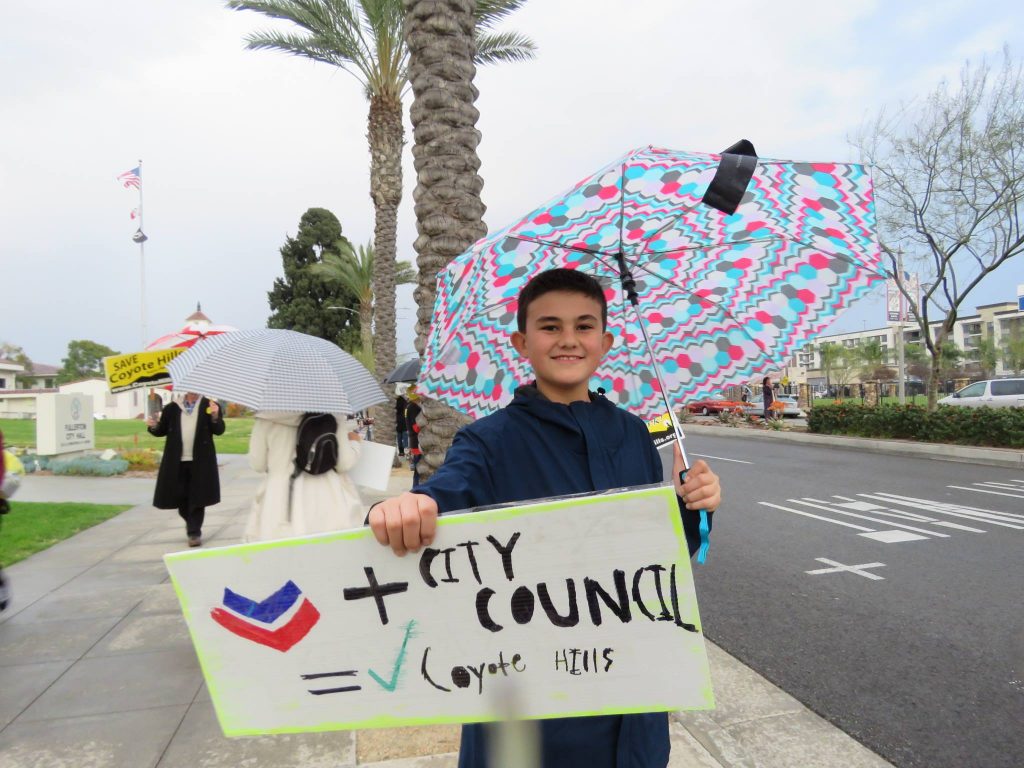 Editorial by Nathan Wayne Guerrero
A rally of over 75 people came to the front of the Fullerton City Hall in support of saving all 510-acres of the West Coyote Hills on Tuesday, March 5. Even though it was a school night and raining, many including students, stayed on for the council meeting and spoke.
Though the California Supreme Court decided not to review the case of Coyote Hills we still went to the rally because “We are Not Done.”
At the rally, I interviewed Linda, a Fullerton resident since 1959 and a 20-year-long fighter for saving Coyote Hills as open space. She said “NO! to 750+ Chevron homes.” I decided on the title above, after reading that the Chevron land is polluted in the article “What Chevron Gets if Measure W Passes” from the Orange Juice blog reads:
“Chevron gets a free pass to avoid restoring all of West Coyote Hills to its pre-drilling state while maintaining their rights to extract oil and gas from the parcel. This includes development rights, which they’ll use to build over 700 homes and a shopping center.”
After the rally, a city council meeting was held at city hall. Even though Coyote Hills was not on the agenda – almost all the comments made during the public speaking time addressed the issue of Coyote Hills. (Other comments were made about renaming the street Mid Block to honor Police Officer Tommy De La Rosa who died protecting against drugs (which will come back as an agenda item); about flying the Pride Flag during Pride Week; and help for the homeless.)
Mayor Jesus Silva noted that, agree with the Friends of Coyote Hills or not, their lawsuits and work on saving all the land gave time to raise money to buy more of the property – We went from $9 million to $30 million during that time.
As I was interviewing people at the rally, I came upon a small dog named Leela, dressed in a paper sign that read, “SAVE IT! DON’T PAVE IT!”
Again, I urge all citizens of Fullerton and those who read this to please get involved and attend events in support of raising the funds to buy more of Coyote Hills as open space – because if you don’t – there will soon be No more wildlife, and definitely No more hills (the hills will still be there, but they will be covered in homes that you can’t afford).
Visit www.coyotehills.org to learn more.
ED: Nathan Guerrero is a local 7th grader and a youth reporter for the Fullerton Observer on the views of his generation regarding Coyote Hills. Read his first report “Coyote Hills or Concrete Hills? A View from the Next Generation” in the Local News section at www.fullertonobserver.com.