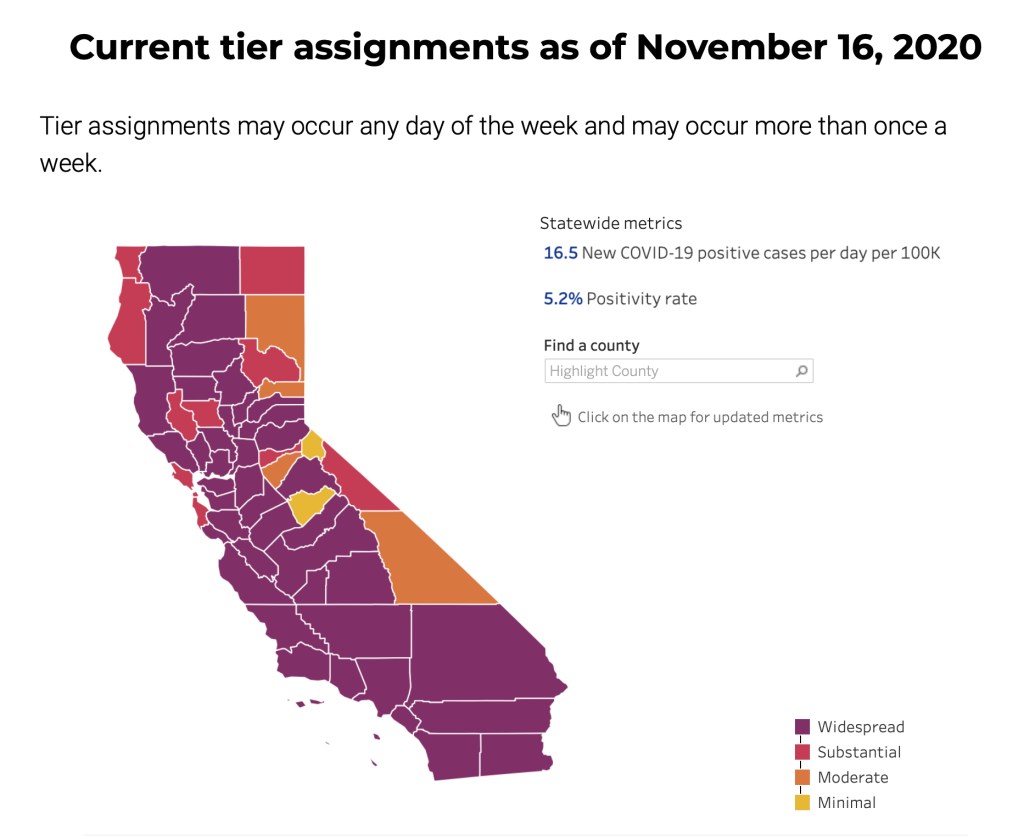 28 of California’s counties, including Orange, have been moved to the Purple Tier. California Department of Public Health

The California Department of Public Health (CDPH) announced Monday that Orange County had been moved from the Red Tier, or second most restrictive, to the Purple, or most restrictive tier of the state’s Blueprint for a Safer Economy. The four tier color coded Blueprint is a rubric developed by the CDPH to measure the progress of each of the state’s 58 counties in order to determine how widely each may reopen or must restrict or close various businesses, venues, activities, and schools in order to control the spread of the coronavirus.

Governor Gavin Newsom held a news conference Nov. 16 to announce that, effective the following day, the state was “pulling an emergency brake” on the Blueprint due to a dramatic increase in COVID-19 cases. 28 counties, including Orange, were moved back to the Purple, or “Widespread,” Tier, placing nearly 95% of California residents under the most restrictive pandemic conditions short of a new Stay at Home order, a move state officials say they are also considering.

On Thursday, November 19, Governor Newsom and the CDPH announced a limited Stay at Home Order requiring generally that non-essential work, movement and gatherings stop between 10pm and 5am in counties in the purple tier. The order will take effect at 10pm Saturday, November 21 and remain in effect until 5am December 21. This is the same as the March Stay at Home Order, but applied only between 10pm and 5am and only in purple tier counties that are seeing the highest rates of positive cases and hospitalizations.

State health officials are concerned about a rate of increase in COVID-19 cases greater than that seen in July of this year, and want to ensure that hospital facilities, particularly Intensive Care Unit beds, are not overwhelmed by a new wave of patients. COVID-10 cases spiked over the summer, in part, it is believed, because residents ignored calls for social distancing and the wearing of face coverings and gathered in large numbers for Memorial Day and 4th of July celebrations, helping the virus to spread to larger numbers of people, many of whom required hospitalizations, and some of whom died, weeks later.

The change in tier status will immediate require the closure of facilities previously allowed to be open in limited capacities under the less restrictive Red, or “Substantial” Tier. Houses of worship, bars and restaurants, gyms, movie theaters, and other indoor venues currently operating with limited indoor occupancies would need to close indoor activities entirely, and only maintain outdoor services with modifications for social distancing. It would appear that hair salons and barbershops would still be allowed to operate indoors with modifications, but retail stores must reduce capacity from 50% down to 25%, which could see a return of limited numbers of customers being allowed to enter stores at the same time.

Schools already in operation are not required to close, but schools that have not reopened for in-person instruction may not do so at this time. Colleges and Universities must move all but studio and lab classes to online instruction.

The County or Orange issued a press release the same day to announce their own press conference the following day, Nov. 17, at 1:00 p.m. On hand will be Supervisors Andrew Do and Doug Chaffee as well as OC Health Care Agency Director Clayton Chau and other county health officials. Absent will be Board of Supervisors Chair Michelle Steel, who has just been elected to serve in the United States Congress. Nonetheless, Steel’s office did not miss the chance to issue a press release Monday criticizing Gov. Newsom’s actions as “unilateral” and claiming, without citing any evidence, that they “erode trust in government.” Steel, as well as outgoing Fullerton Mayor Jennifer Fitzgerald, have called the state’s strategy for controlling the virus a “one-size fits-all approach,” and advocated for more local control of business activities during the pandemic.