The three newly-elected Fullerton City Council members were sworn in at the December 1 Council meeting. Due to COVID-19 precautions, the meeting was only open to a limited number of family and friends. 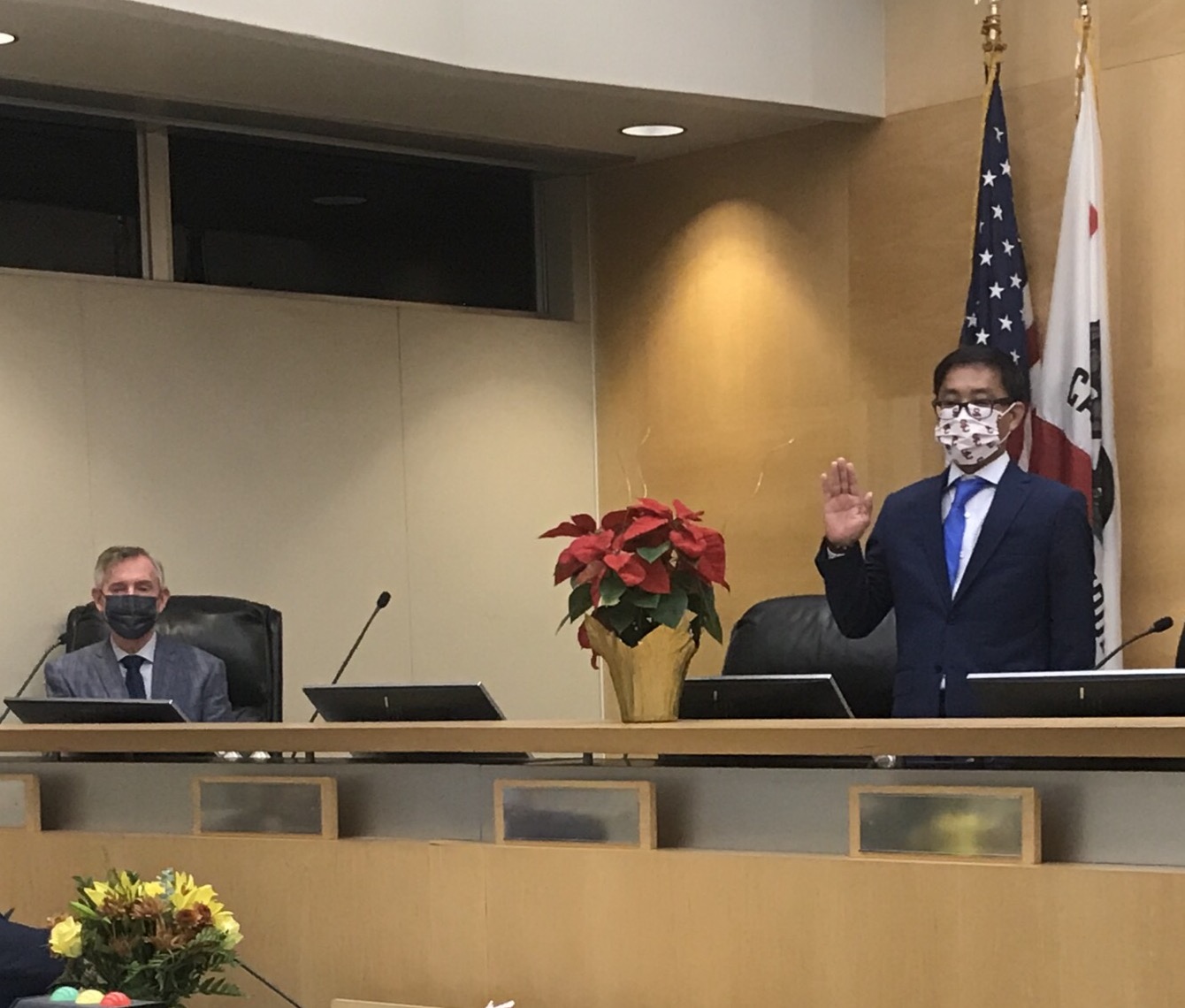 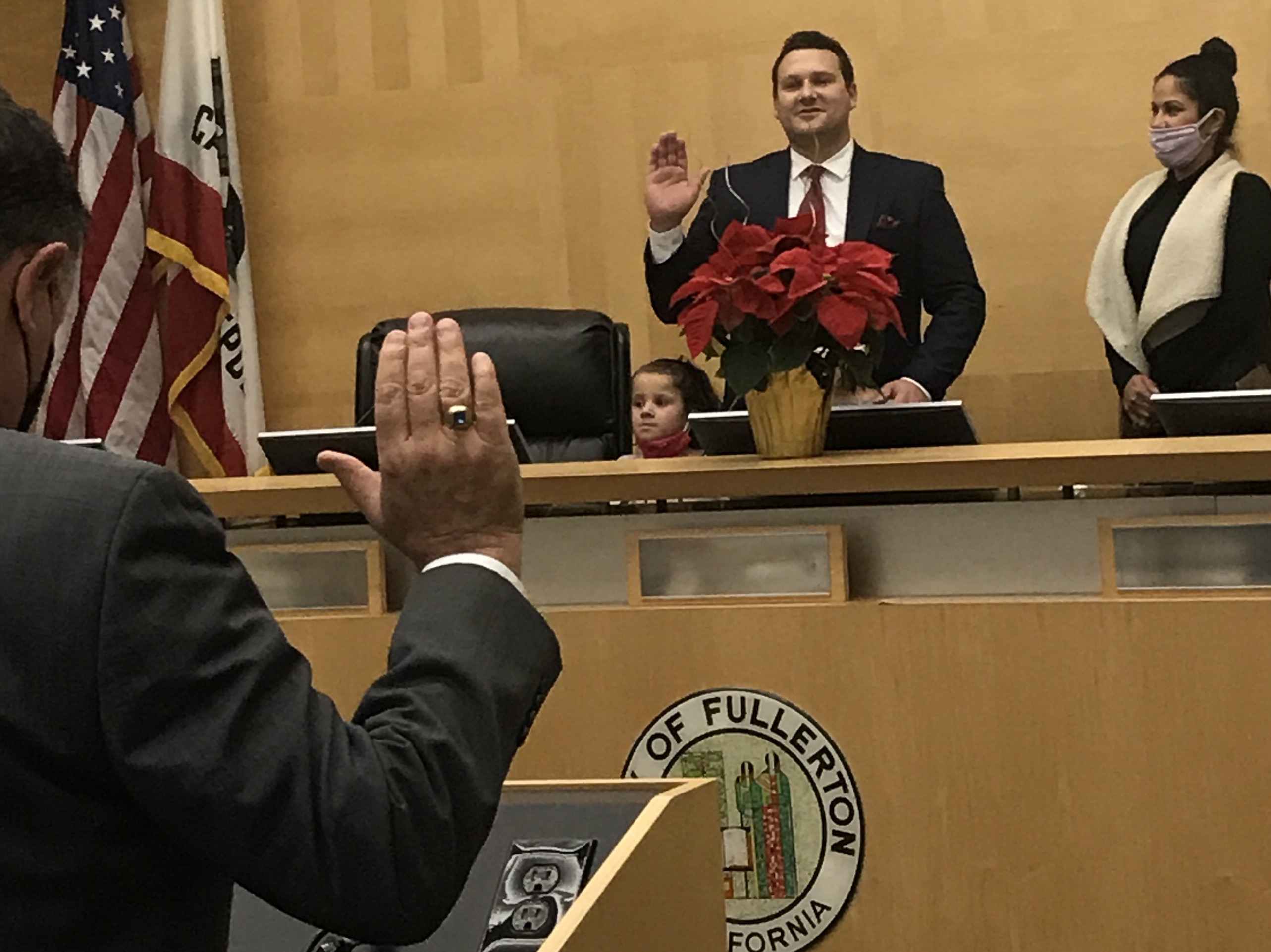 District 2 Council representative Nick Dunlap was sworn in with his wife Bianca and two daughters at his side by County Supervisor Donald Wagner. Photo by Jane Rands. 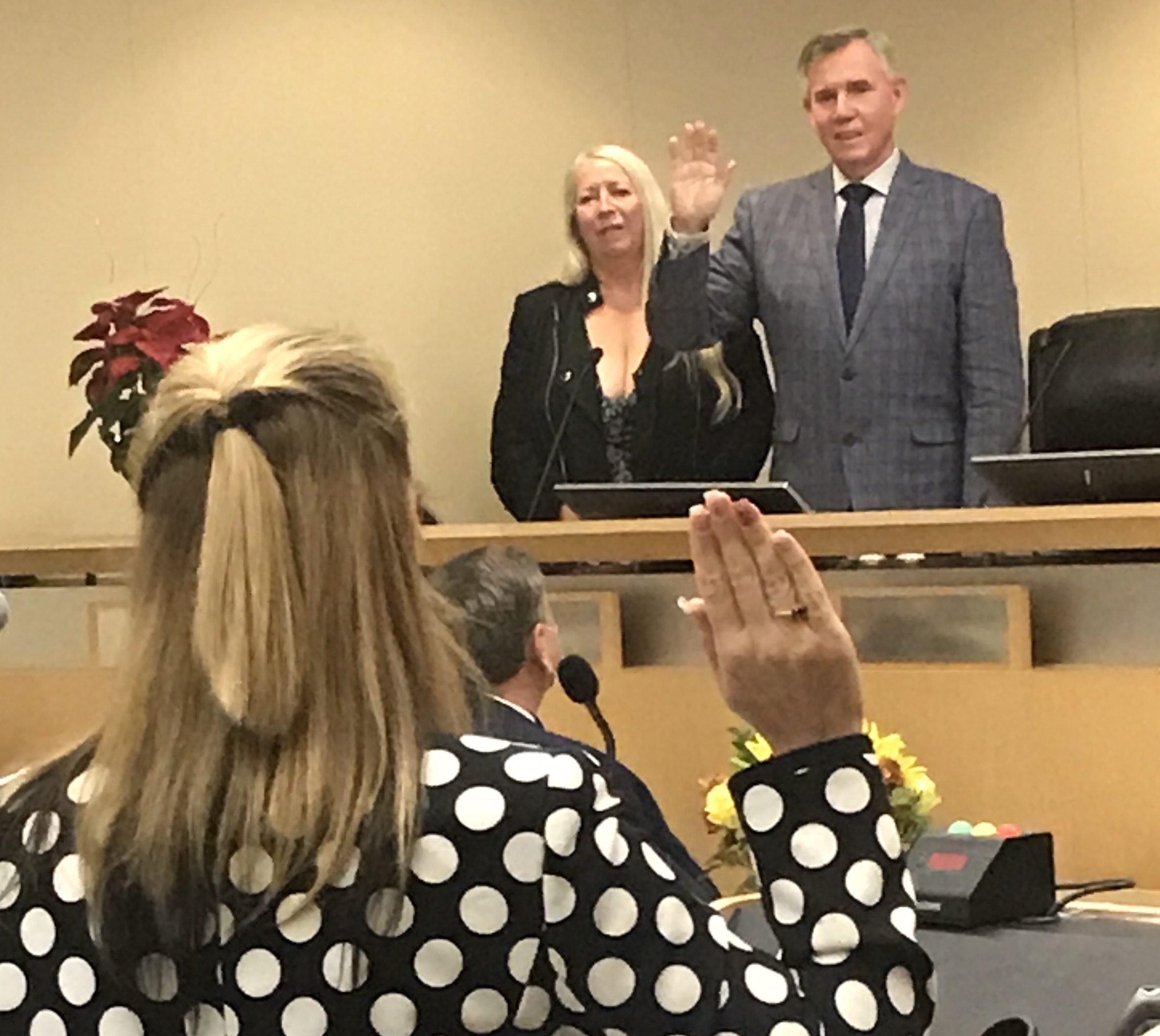 District 4 Council representative Bruce Whitaker was sworn in with his wife Linda at his side by City Clerk Lucinda Williams. Photo by Jane Rands.

Council Member Ahmad Zahra nominated Bruce Whitaker to serve as the new Mayor, and Council voted unanimously to approve this.

City Council selects a new Mayor and Mayor Pro Tem on an annual basis each December. The Mayor, whose vote counts the same as other councilmembers, presides over and leads Council meetings. The Mayor Pro Tem leads meetings and represents the City in the Mayor’s absence.

Council then voted 3-1-0 to select Dunlap, not Zahra as Mayor Pro Tem.  Whitaker, Jung, and Dunlap voted for Dunlap, Silva voted for Zahra, and Zahra abstained. 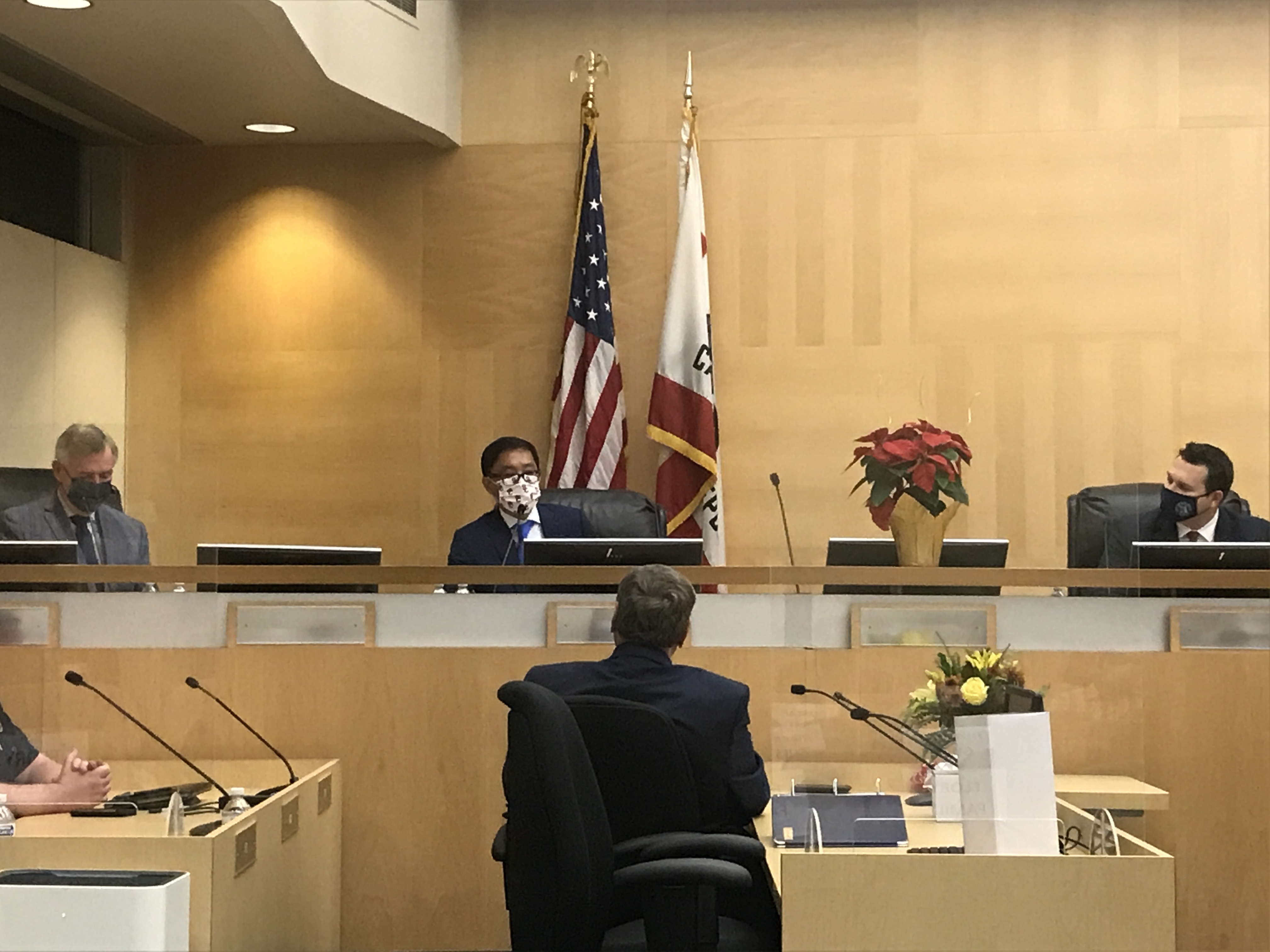 This was a break from a new City policy (adopted in October 2020) that states, “Selection of the Mayor Pro Tem by the City Council is based on seniority according to the number of years a member has served consecutively on City Council without serving as Mayor.”

Based on this policy, Council Member Zahra (who has served for two years on council), should have been selected as Mayor Pro Tem.

However, the new regulation also states, “While the rotation of City Council members is a policy designed to ease the transition of members into the Mayor and Pro Tem and positions, nothing in the policy prohibits the selection of a Mayor or Mayor Pro Tem based on the majority vote of the City Council.”

Thus, the decision to appoint Dunlap, not Zahra, as Mayor Pro Tem is allowed, but is a break with policy.

Jung did not explain his reason for the break with policy during the meeting, however when asked by the Observer  he said, “The next in line tradition was disrupted long before I was elected. But I understand and appreciate the concerns. I nominated and voted for Councilman Dunlap’s Pro Tem honorary title with the idea that we as a city have pressing needs that require solutions. And my olive branch to him was to make certain we work together, all five members, to move our city forward.”

In stating that the tradition had been disrupted long before he was elected, Jung was likely referring to instances in the past in which Council Members with more seniority were passed over for selection as Mayor and Mayor Pro Tem.

The most recent example of this was in 2019 when Councilmember Zahra voted with Flory and Fitzgerald to appoint Flory, not Whitaker, as Mayor Pro Tem, even though Whitaker was ahead of her in line, although Flory argued that her prior service in office gave her seniority. It was because of ambiguity in the process that council approved the new resolution in October. It should also be noted that Whitaker also broke protocol at that December 3, 2019 meeting by not voting for Fitzgerald to be Mayor, who was next in line.

Councilmember Zahra expressed his disappointment with the outcome of Tuesday’s meeting posting on social media, “While these titles are symbolic and yield no additional power, it certainly was a disappointing snub to the people of District 5 who have been denied having a Mayor Pro Tem. This also sets a bad precedent and starts off a new Council with division, especially at one of the most challenging economic times in our city. Nevertheless, and as always, I will continue my work representing our city and serving our community with the best of my abilities and intentions.”

This is Jan Flory’s third time leaving office. She has served for a total of 14 years.

“I want to thank my Council colleagues who respect one another and do not let differences of opinion distract from the pleasure of friendship,” Flory said in a longer prepared statement. “Thank you to the community, to those who are engaged, and take an interest in local government.”

Outgoing Mayor Jennifer Fitzgerald, who has served for eight years, also read a prepared statement thanking her Council colleagues and summarizing the issues she focused on while in office.

“There are huge challenges yet to be solved and I wish the new Council the best as they wrestle with them,” Fitzgerald said.

Some members of the public expressed concern to the Observer that their public comments either were not read during the meeting or were shortened by the City Clerk.

Jane Reifer, who wrote a recent article for the Observer about improving public participation during COVID-19, submitted the following public comment, which was not read during the meeting:

“With virtual meetings now, it’s even more essential that residents be able to participate robustly. Among other improvements, please develop a method to call in, both to hear and comment. This will allow better communication and includes people without computers. Also, please have consistent protocols for all City commissions. It is a confusing and frustrating patchwork instead of an opportunity for public participation.”